Ahhhhh, back in the land of the saguaro!

We had a little boo-boo happen just after arrival, though, when I went to put out the bedroom slides. I hit the button for the larger of the two and heard the sound of splintering wood. My heart slammed into my throat, and I realized my wooden tray table was getting jammed behind the nightstand portion of the slide. I hit the button again to stop the slide, then move it back in. I thought it was the table I’d heard being crunched, but it was the back edge of the particle board veneer on the side of my nightstand. There was a tear about 3-4″ but no major damage, and what damage there is can’t be seen unless you’re a contortionist with a flashlight. Although minor, it was a preventable mistake. I had forgotten to move the table, TBG had seen it but thought that since I hadn’t moved it, I’d wanted it there. We’re working on laminated checklists now. 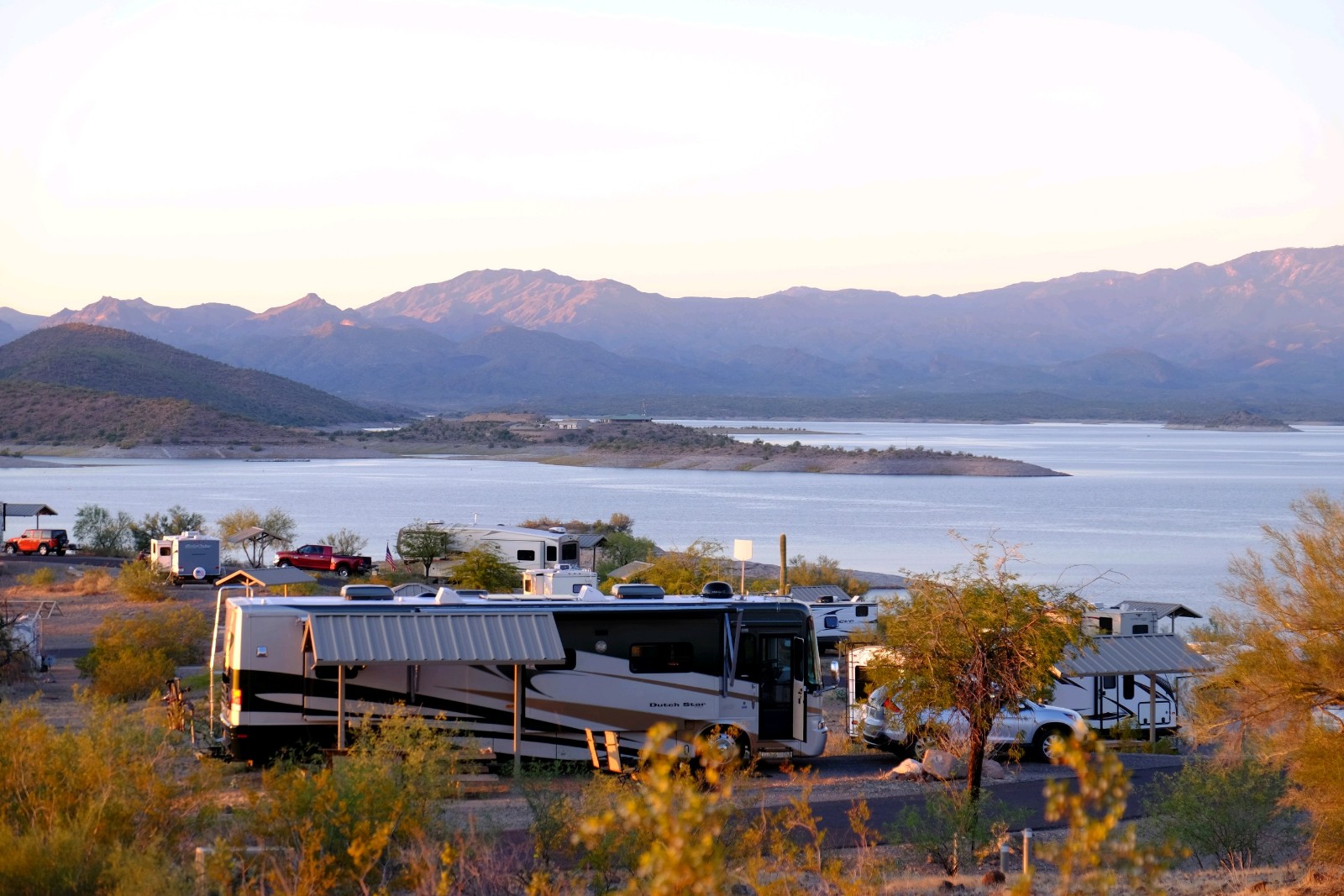 #7 in the Roadrunner CG

There are several regional parks in Maricopa County (the county of Phoenix) and Lake Pleasant was the first in a series at which we’ll be staying. They all offer a ton of stuff to do without having to travel much if at all. We started our first morning with a two-mile walk around the closest trails, then later that afternoon a 12-mile bike ride all over the park in search of some wild burros. 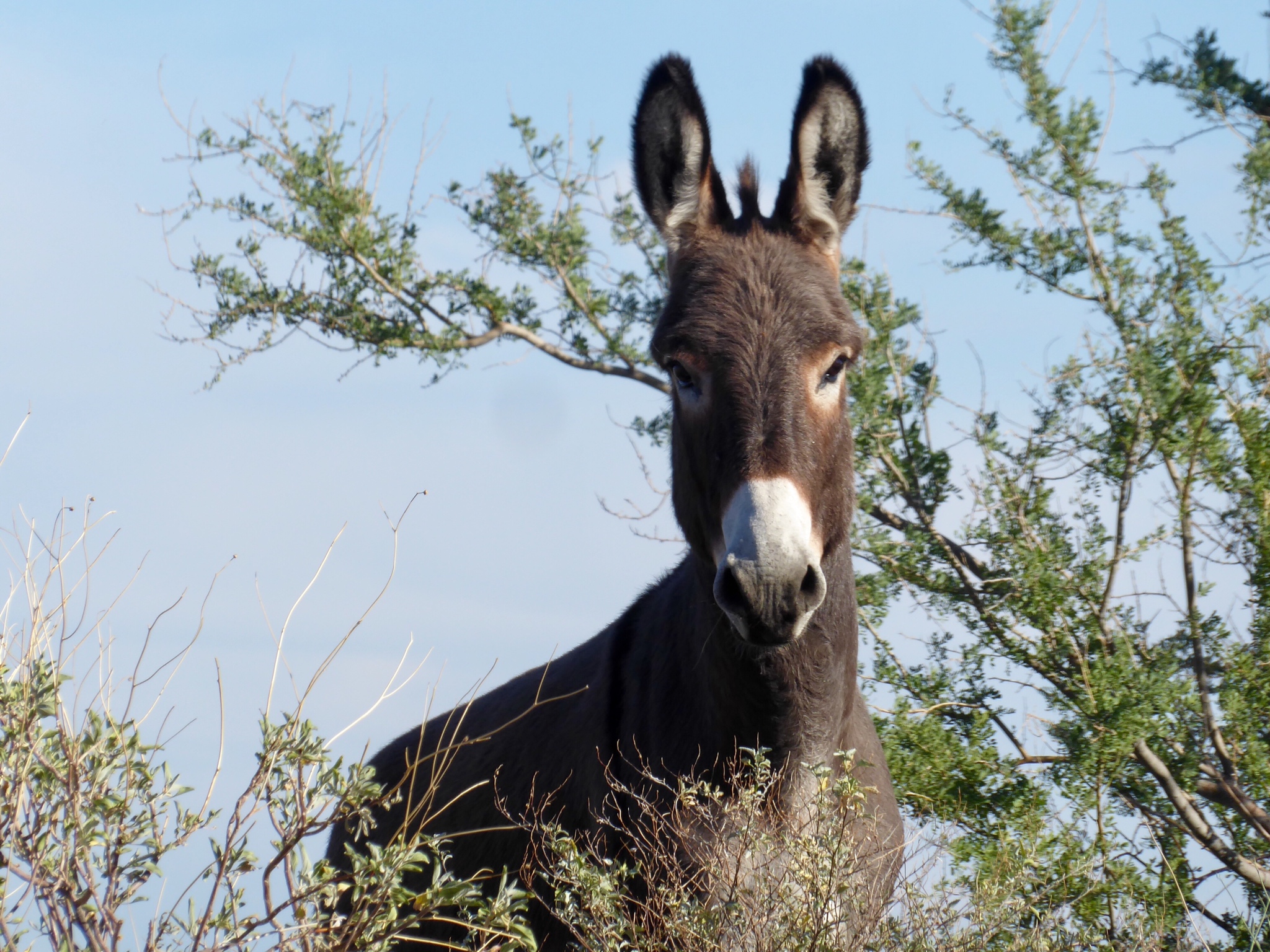 It was a holiday weekend, and with the regional parks being so close to Phoenix, the weather still hot, and Lake Pleasant being the only one of the parks with water activities, all the sites were full by nightfall. Everyone seemed to favor campfires and rope lights under their rigs. The campground looked and smelled like the circus had come to town. It was entertaining to watch a monstrous 5th wheel arrive at 9:30 p.m. and completely block the road, angering two other RVers who had to wait while Monster unloaded their OHV and maneuvered into their space directly across from us. We thought we were going to witness our first campground fist-fight that night, but fortunately it didn’t quite come to that. 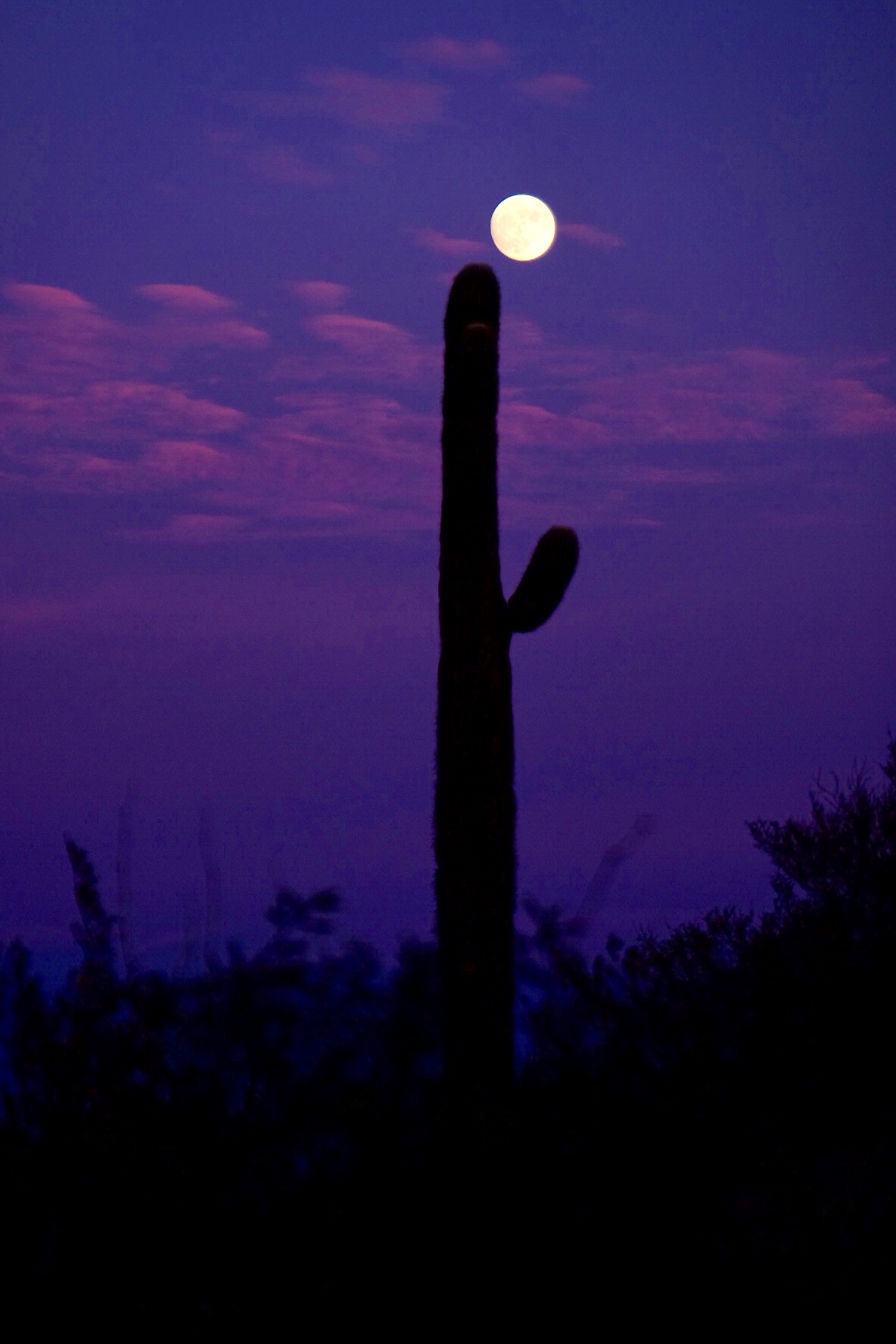 These parks also all have Visitor/Interpretive centers with live animal displays, which oddly, I had no idea about but was delightfully surprised to discover. I checked it out the next day and then walked back up later to attend a Bird Sounds presentation. Afterwards we motored up to the north end of the park in search of a good place to take a dip in the lake. We found one, but I only waded since the water didn’t appeal to me. 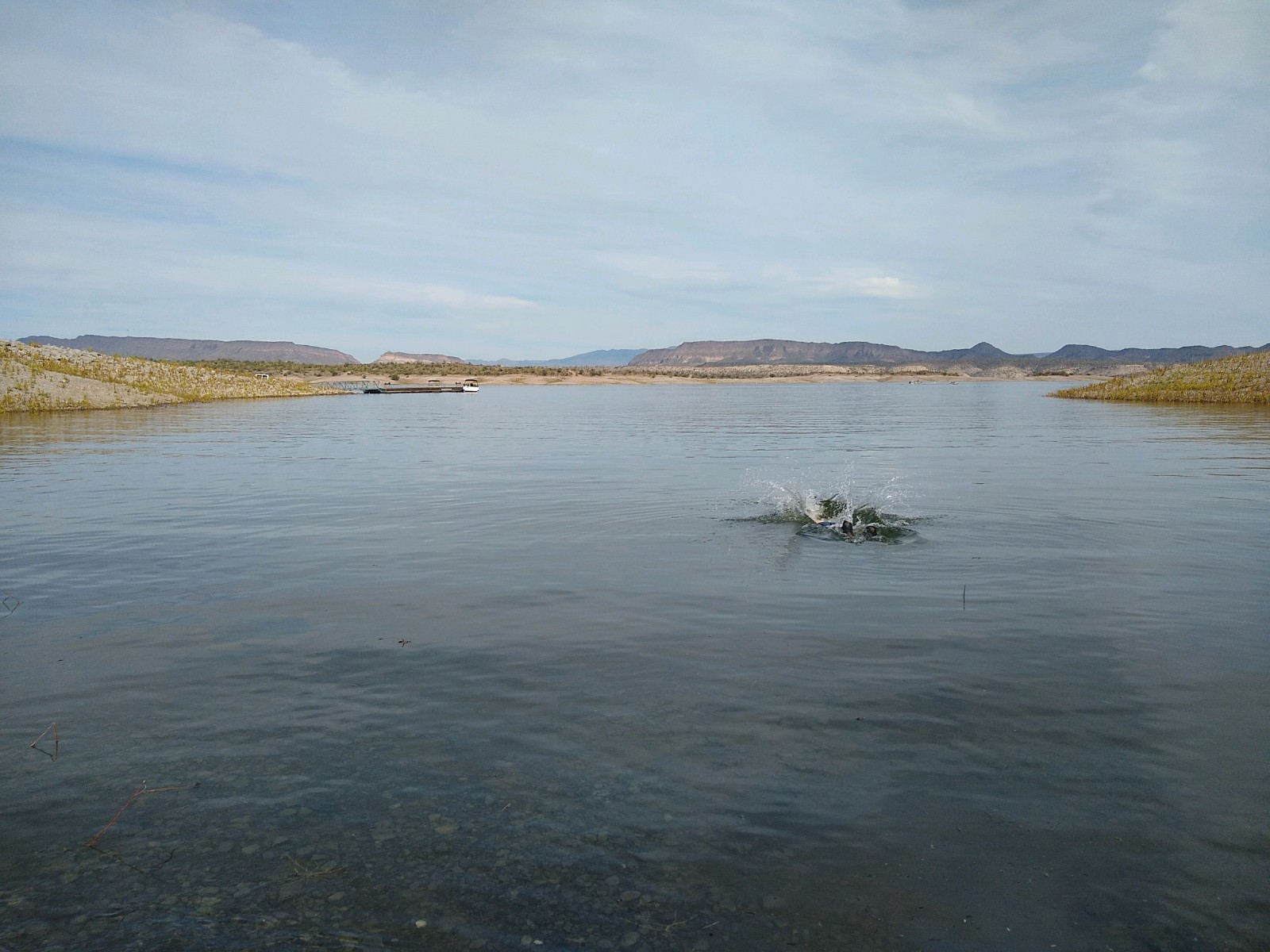 In the morning, I drove out to the Wild Burro Trailhead to meet up for a ranger-led wild burro hike. I spent much of the four-mile trek chatting with the ranger about all manner of topics, which probably accounts for why I failed to take a single picture. At the turnaround point, I spotted the only burro we’d see that day high up on a ridge. You’ll have to take my word for it. 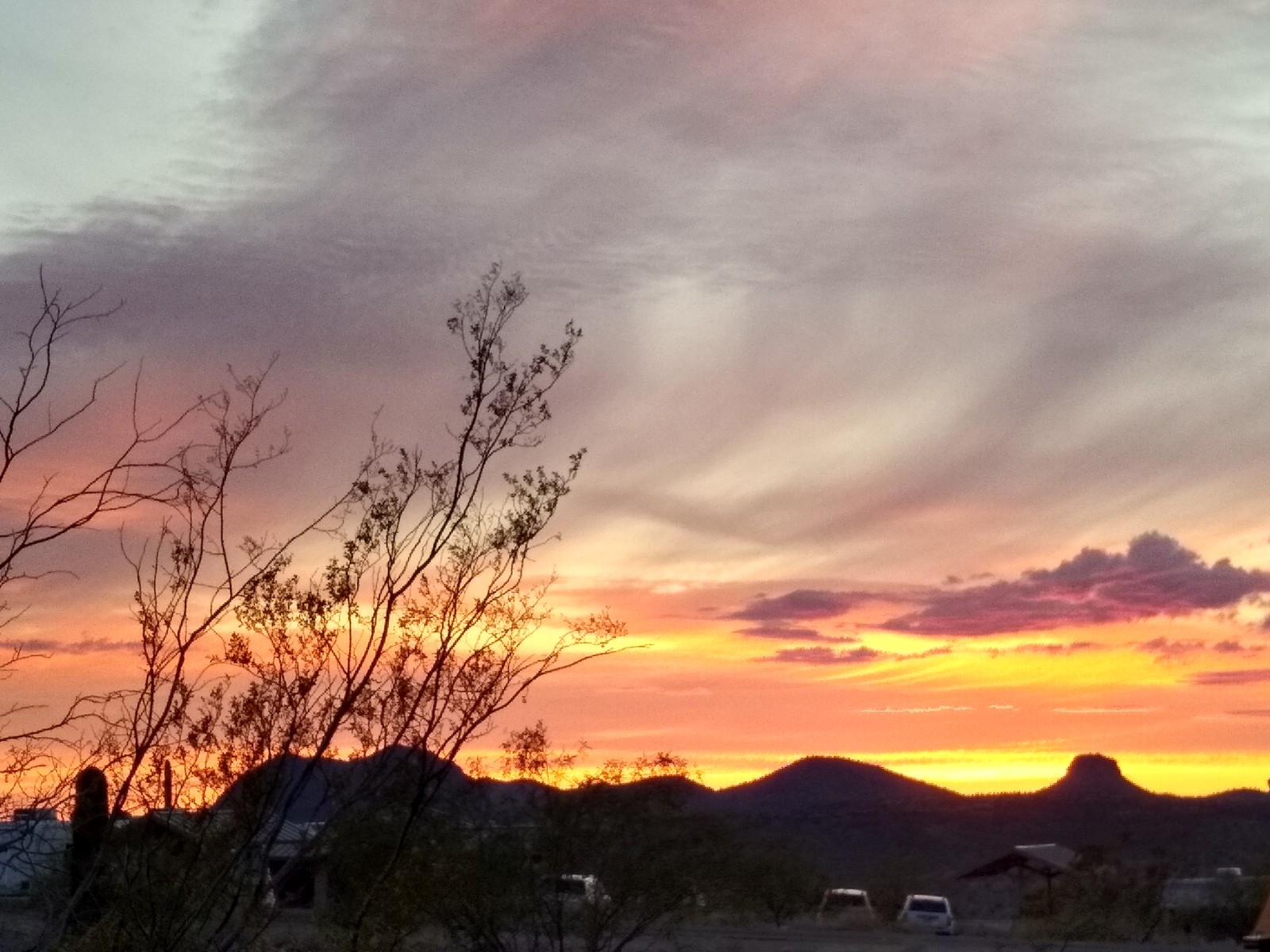 The November evenings were wonderfully pleasant, and we spent a few sitting out for what we called the Sunset Pup Parade as fellow campers took their evening woof-walks. 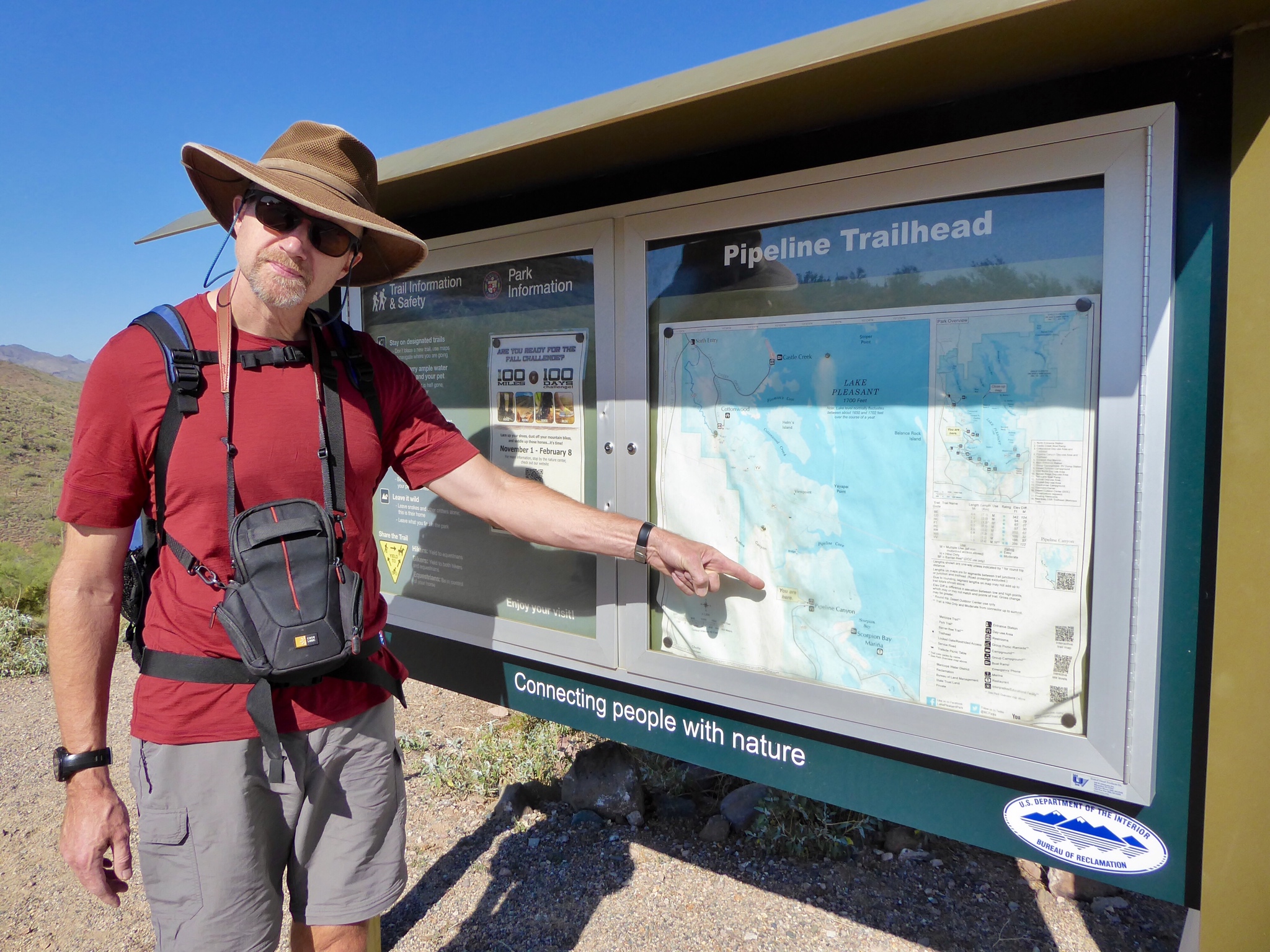 TBG pinpoints where to connect with nature.

If we’d paid attention to the big, honking sign that said the trail didn’t connect to the nature on the other side of the inlet, we wouldn’t have had to turn around after a mile and then drive to a different access point. 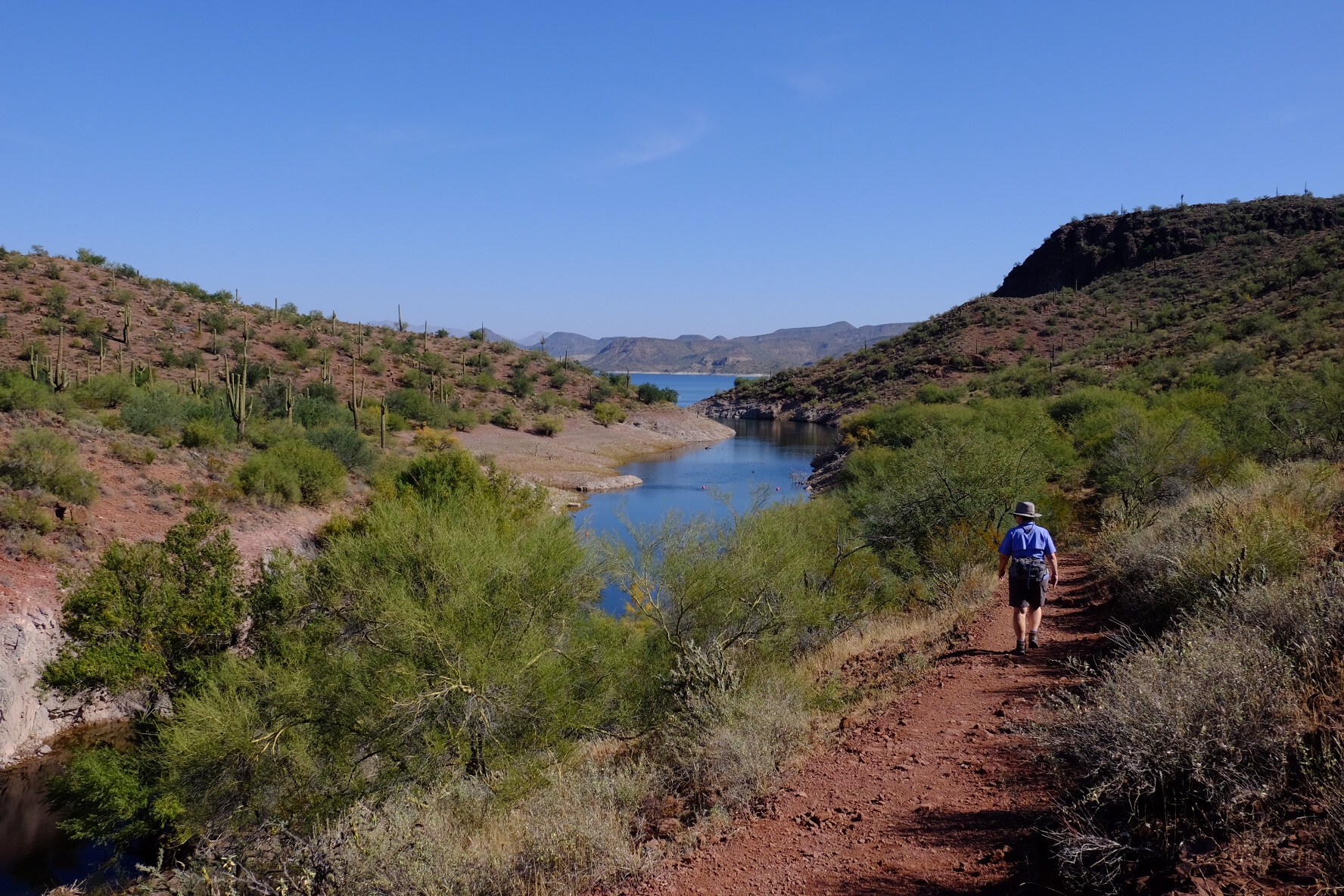 Shortly before where a bridge wasn’t.

We ultimately finished the Pipeline Trail, which ended on the other side of the water in the above photo. 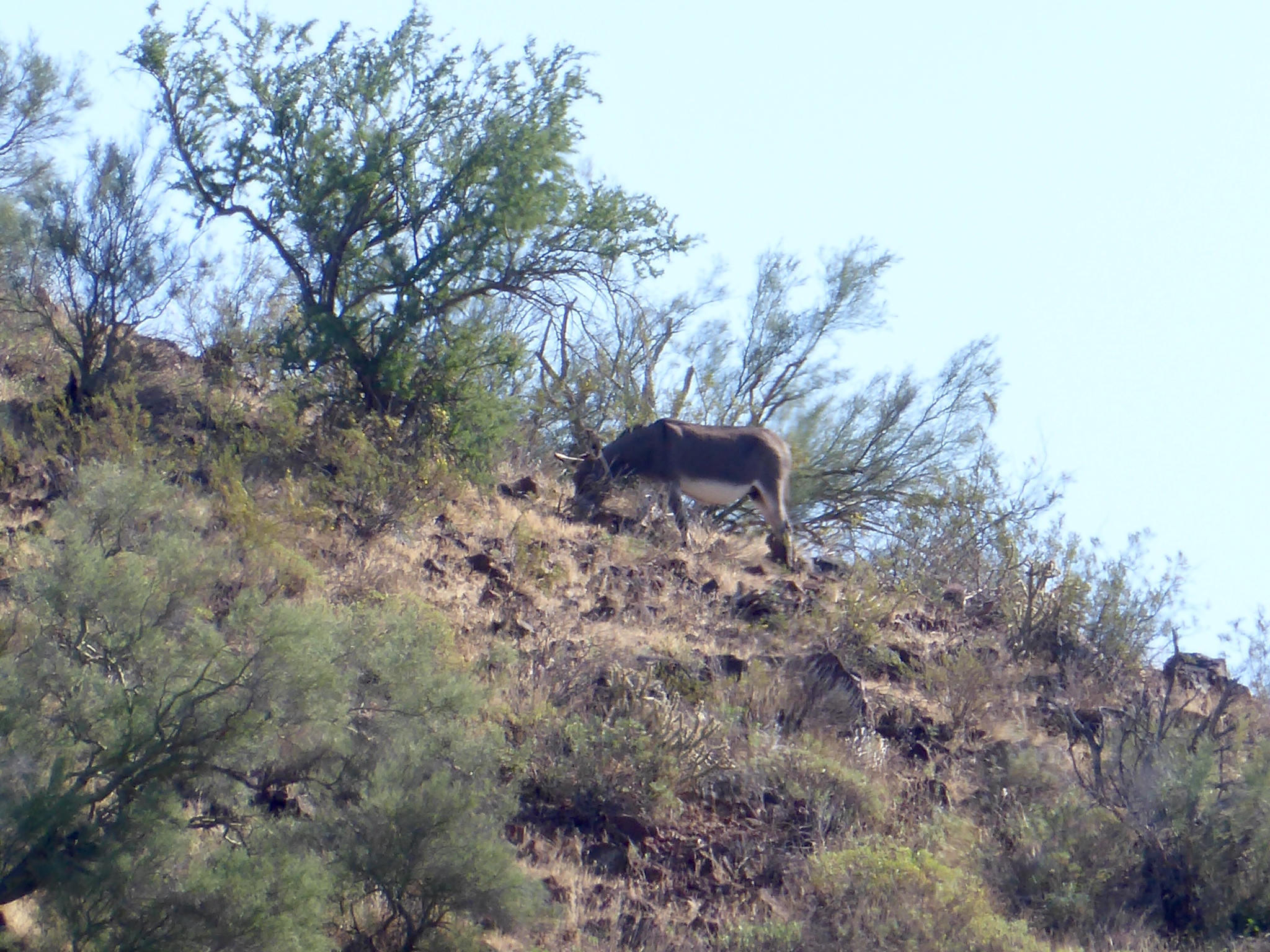 We heard this round-bellied scrub-muncher before we saw it high up on the hill.

We still had energy when we came back to the intersection with the Yavapai Point Trail and decided to go on up. 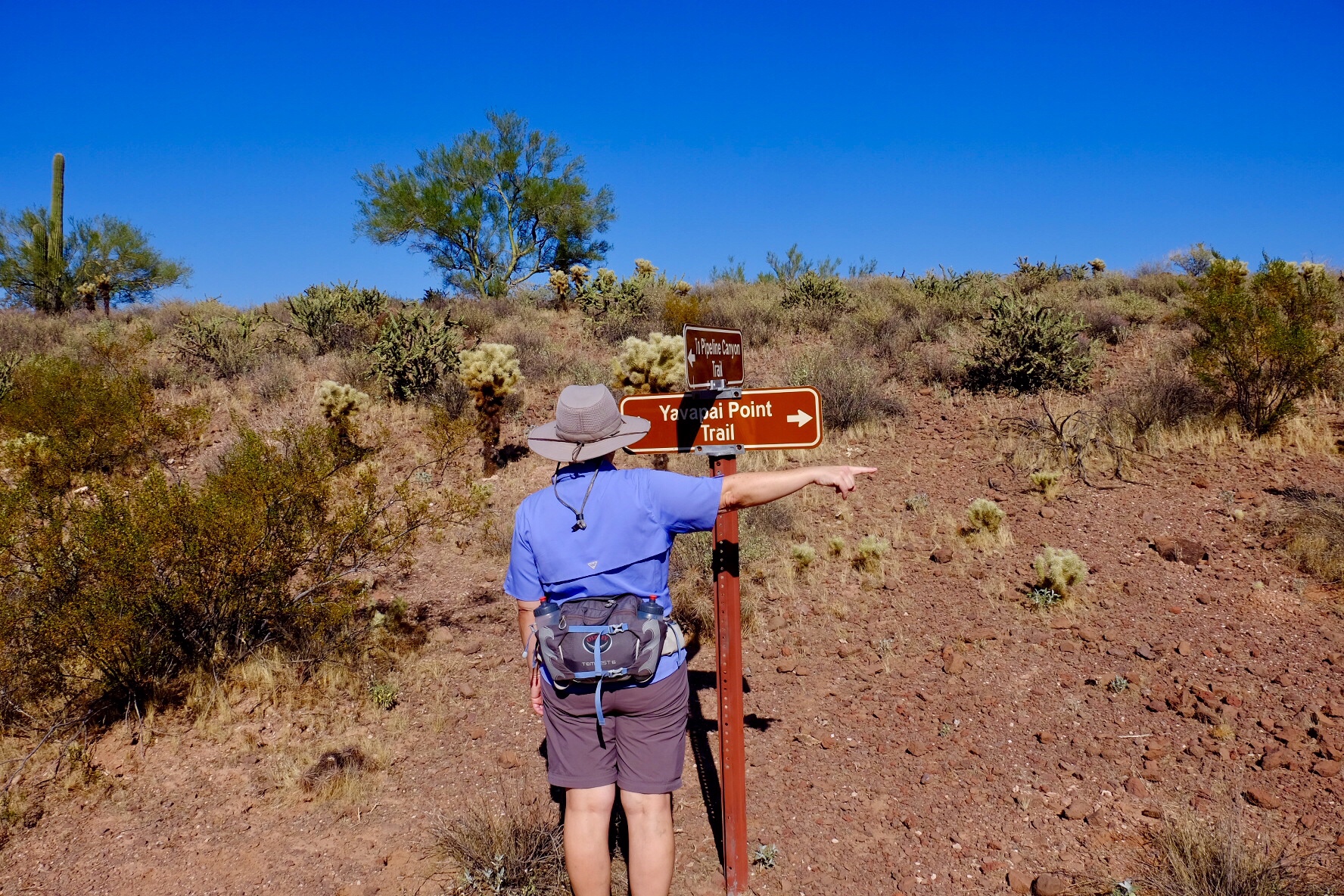 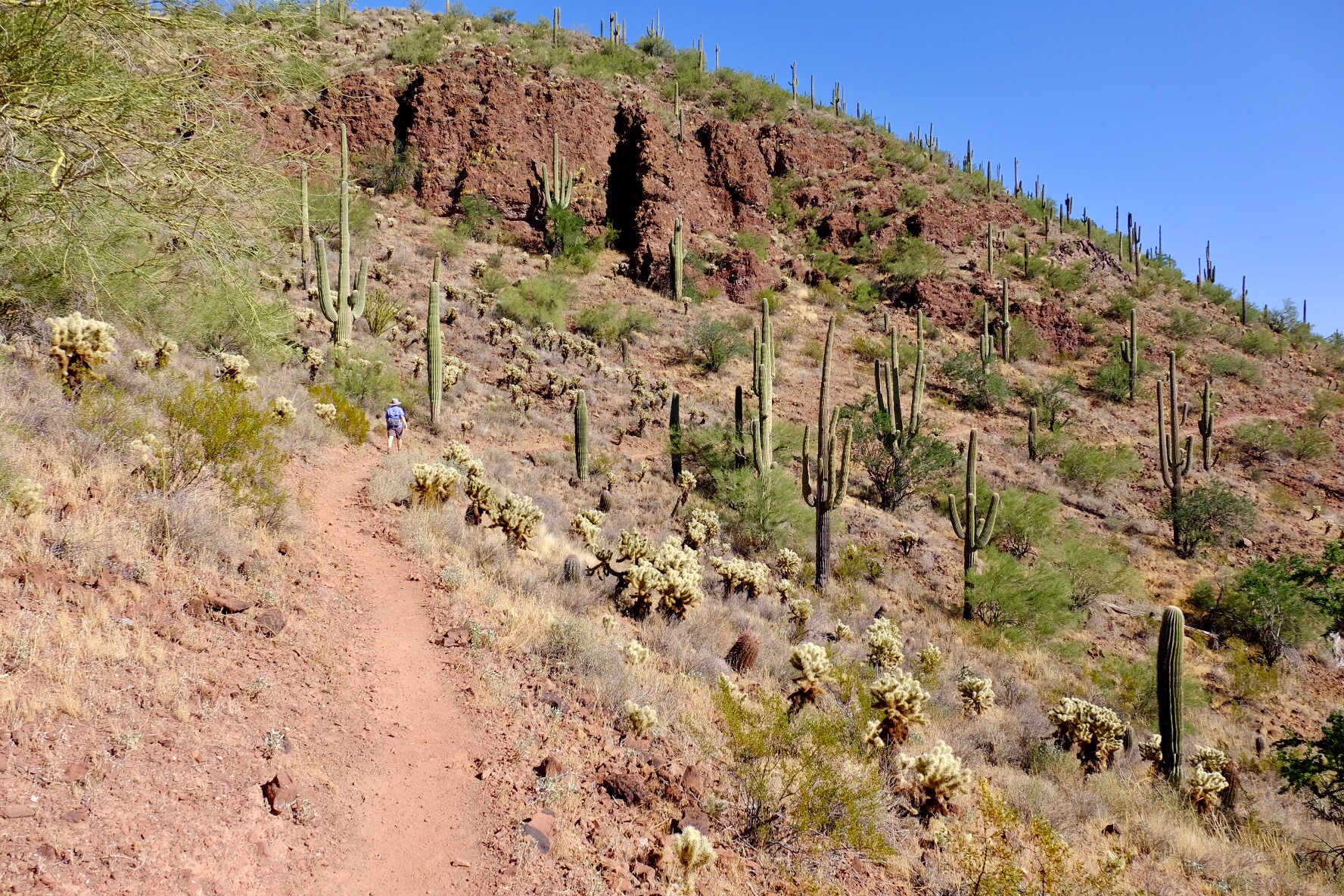 The trail switchbacked up the hillside 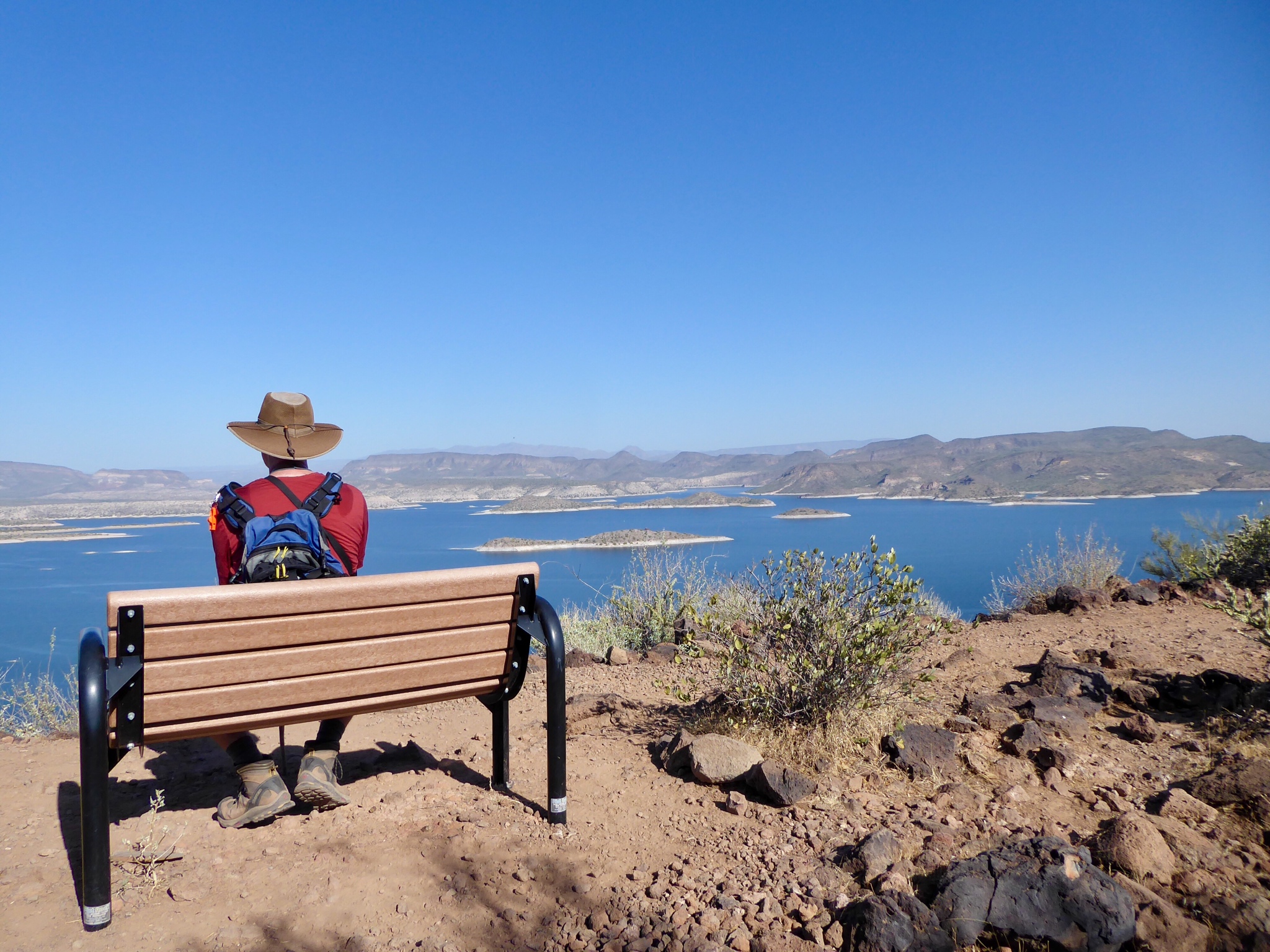 The nice breeze, pretty view, and scarcity of other hikers made for an enjoyable 7 miles.

TBG has been cutting my hair for almost two years, but we drove into town so I could get a cut from a stylist to re-establish a baseline. 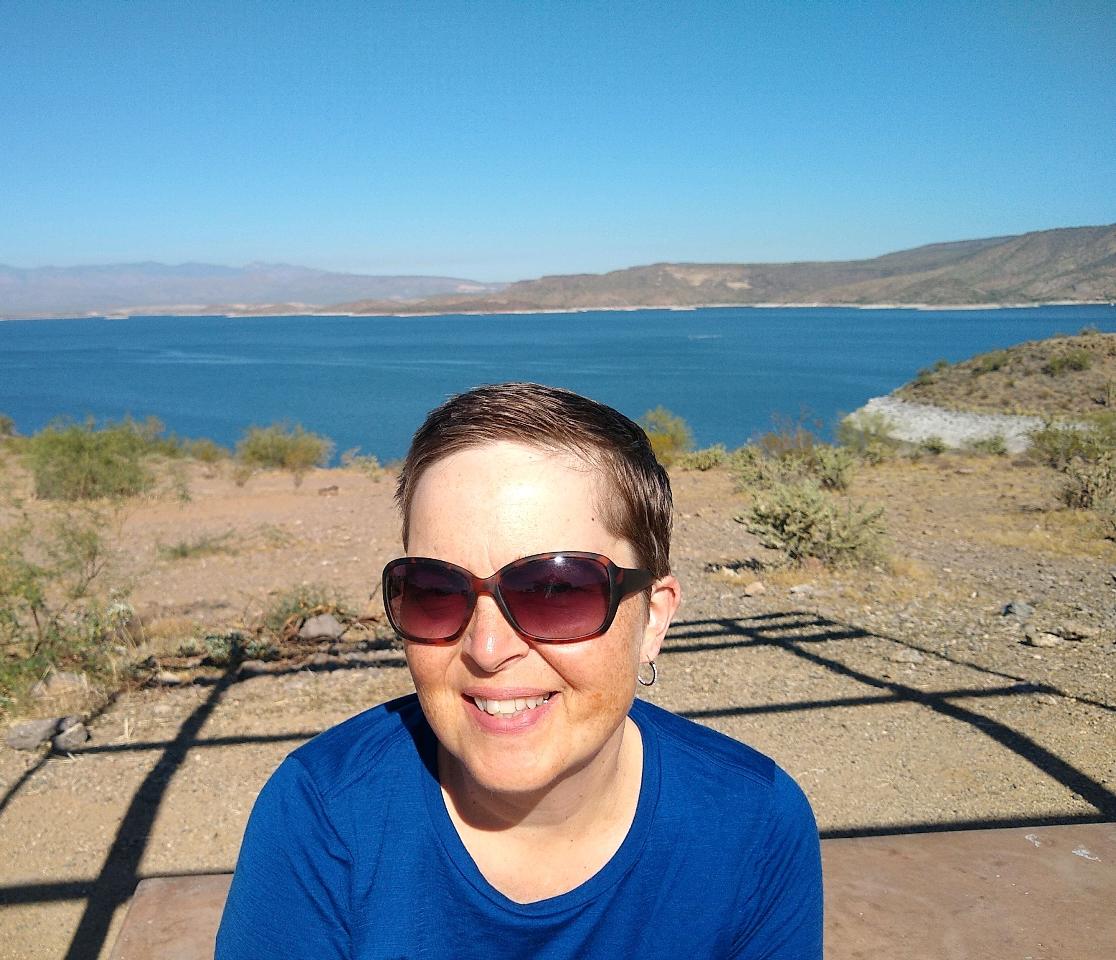 It also got me all set for our hiking date the next day with our friends, The Lowes.

You may remember them from our chance meeting at Guadalupe N.P. or as our next-door neighbors at Hueco Tanks. We had known them in a virtual sense long before those meetings, but became fast friends in person, and have been eagerly anticipating our paths intersecting again. They were camped north of us near Wickenburg, and we drove up to meet them at the trailhead. 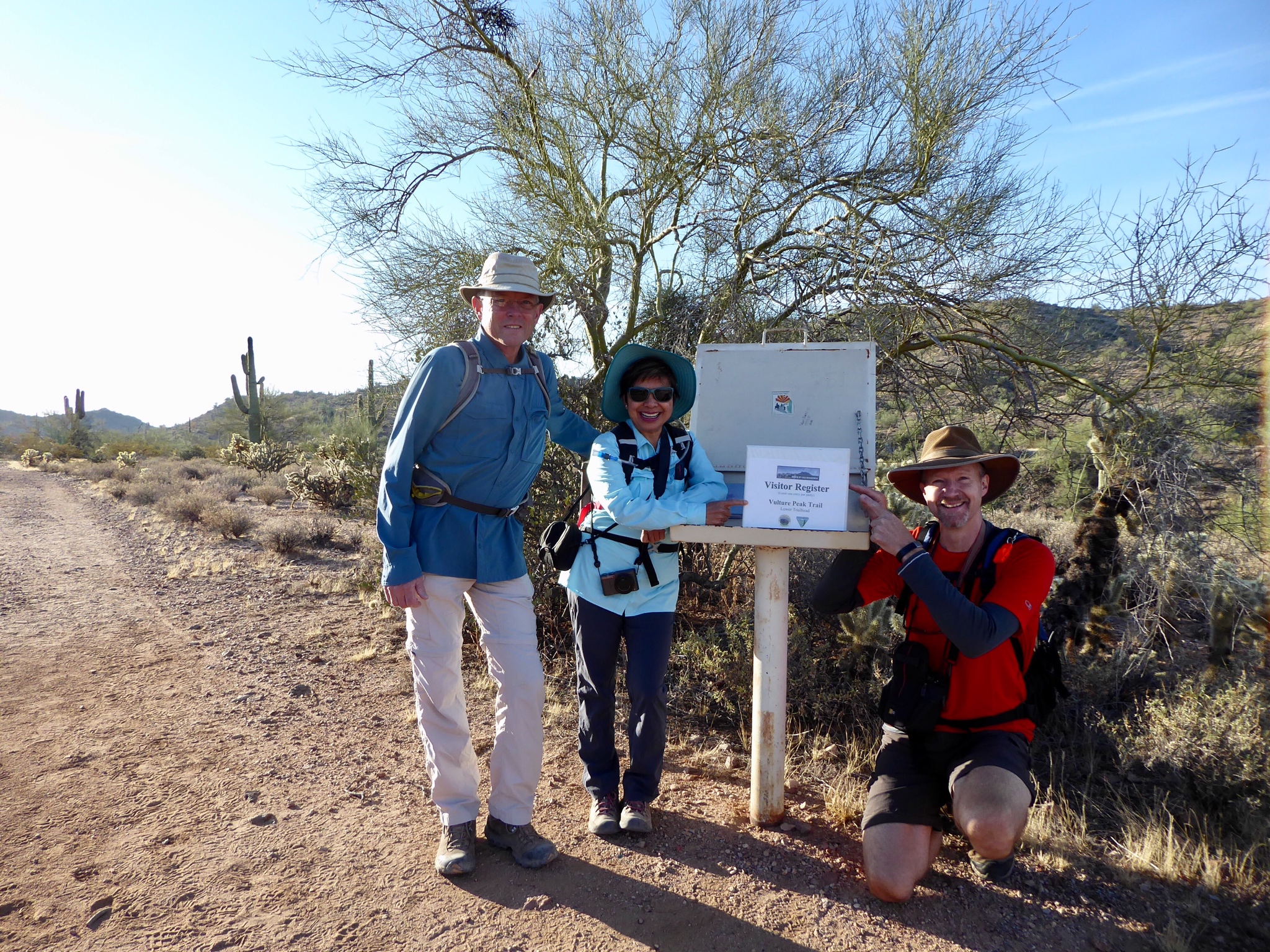 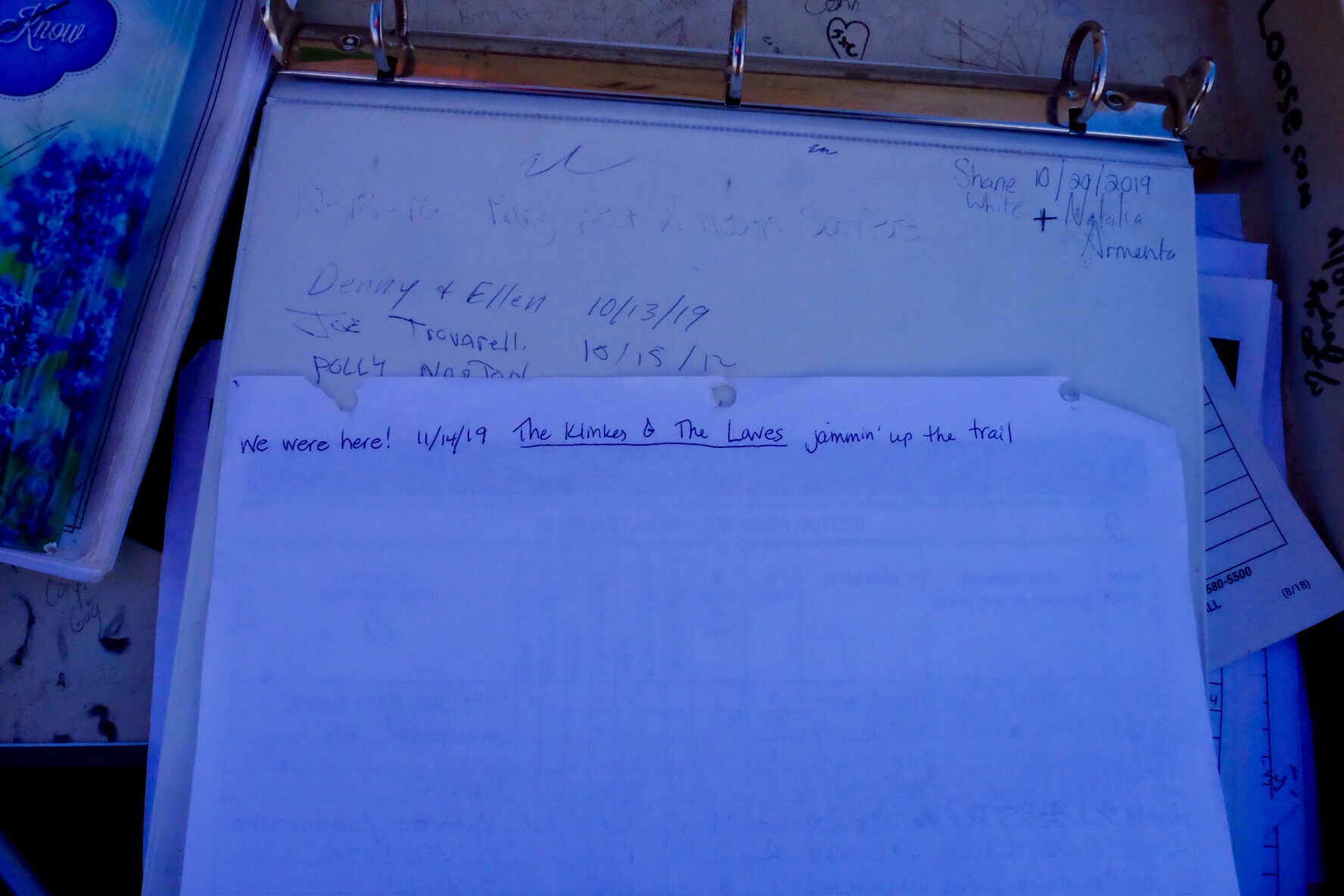 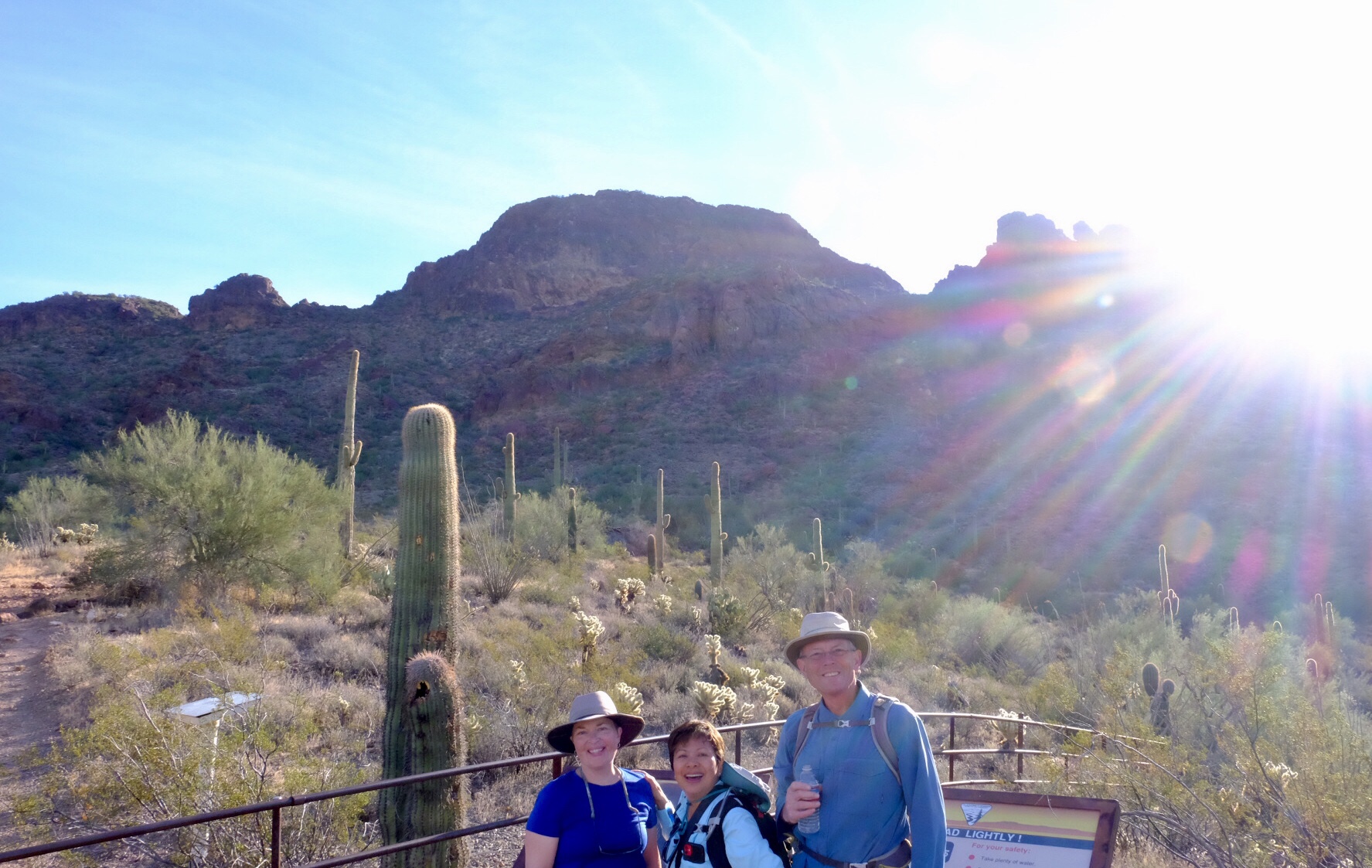 These people got the memo to wear blue.

We were headed up to the saddle pictured just above and to the right of Steve. It is not a long trail, but it is quite steep. The Lowes had done it before, and I asked ML if she thought I’d need my poles. She said, “Nah!” 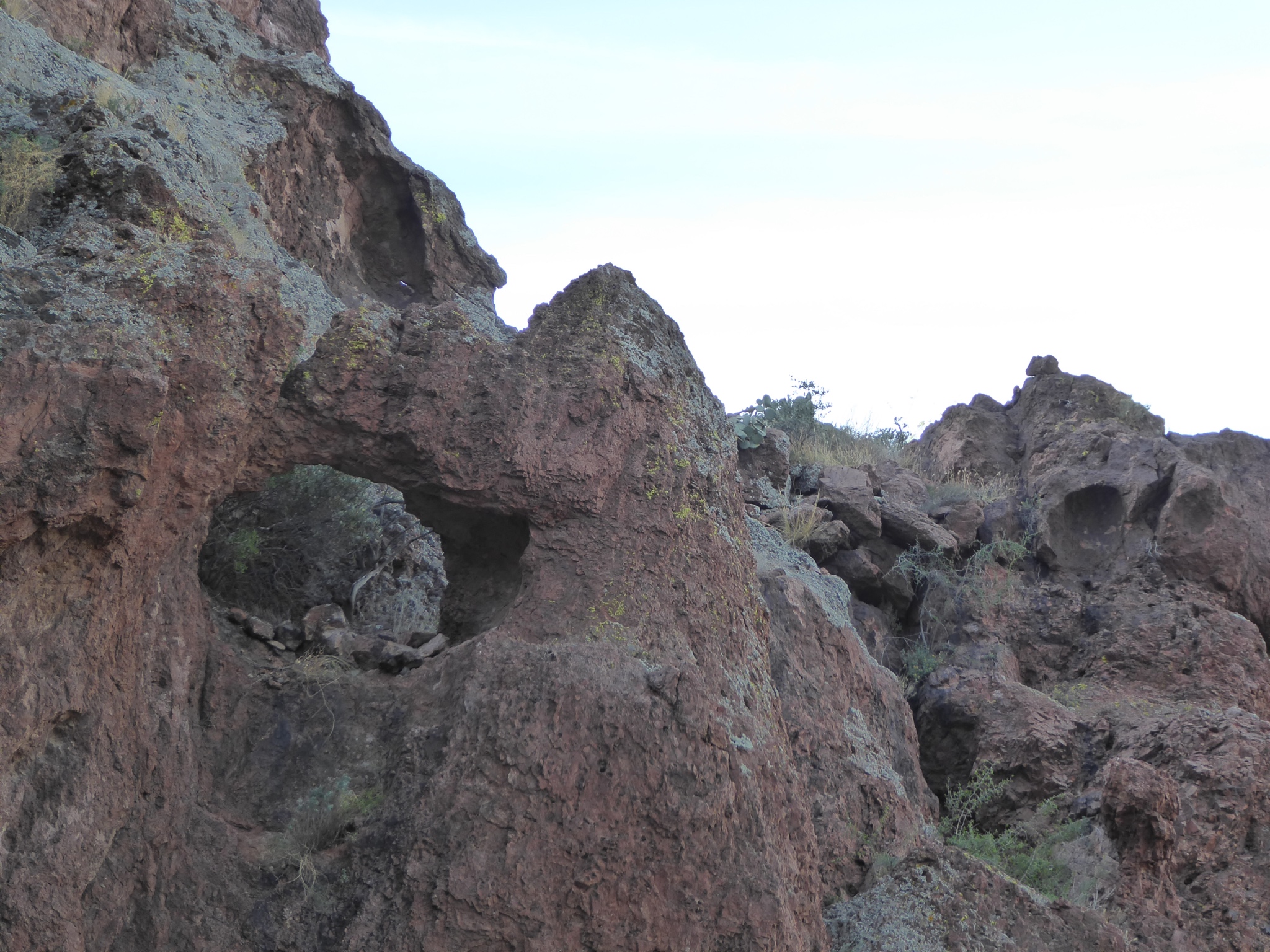 I spotted this arch on the way up!

The trail was almost entirely in the shade, which made it just about perfect temperature-wise. The light and the steepness, however, were not a good combo for picture-taking. We were also talking and laughing a great deal, which is the best reason I can think of to not get a lot of photos taken.

We shared snacks (great jerky, Steve!) and enjoyed the hazy vista in the sun at the saddle, where we briefly contemplated and quickly discarded the idea of scrambling up to the true summit. We even got our own private flyover display by a couple of F-35s from nearby Luke AFB. 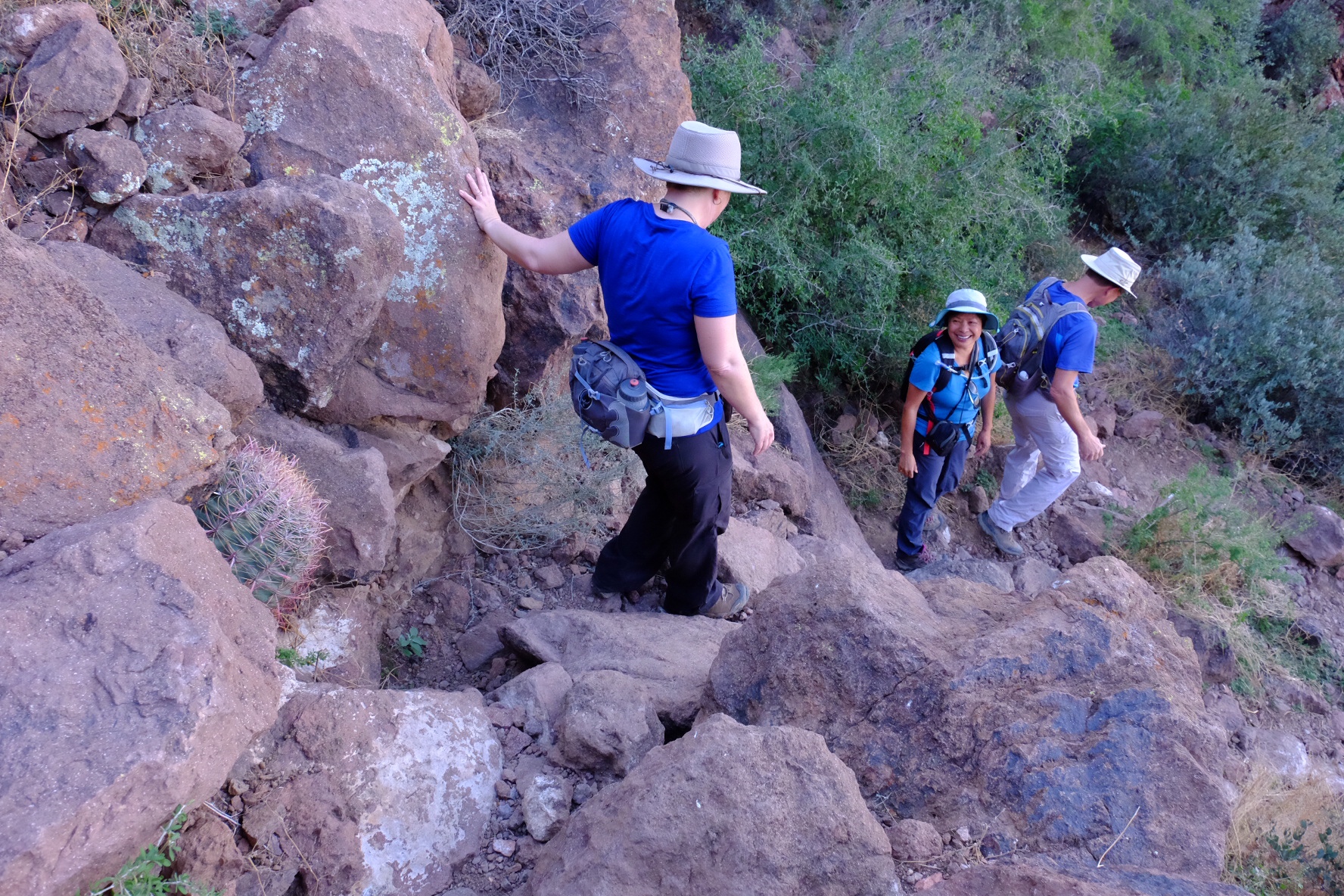 She’s laughing because I just pricked my heinie on that barrel cactus. 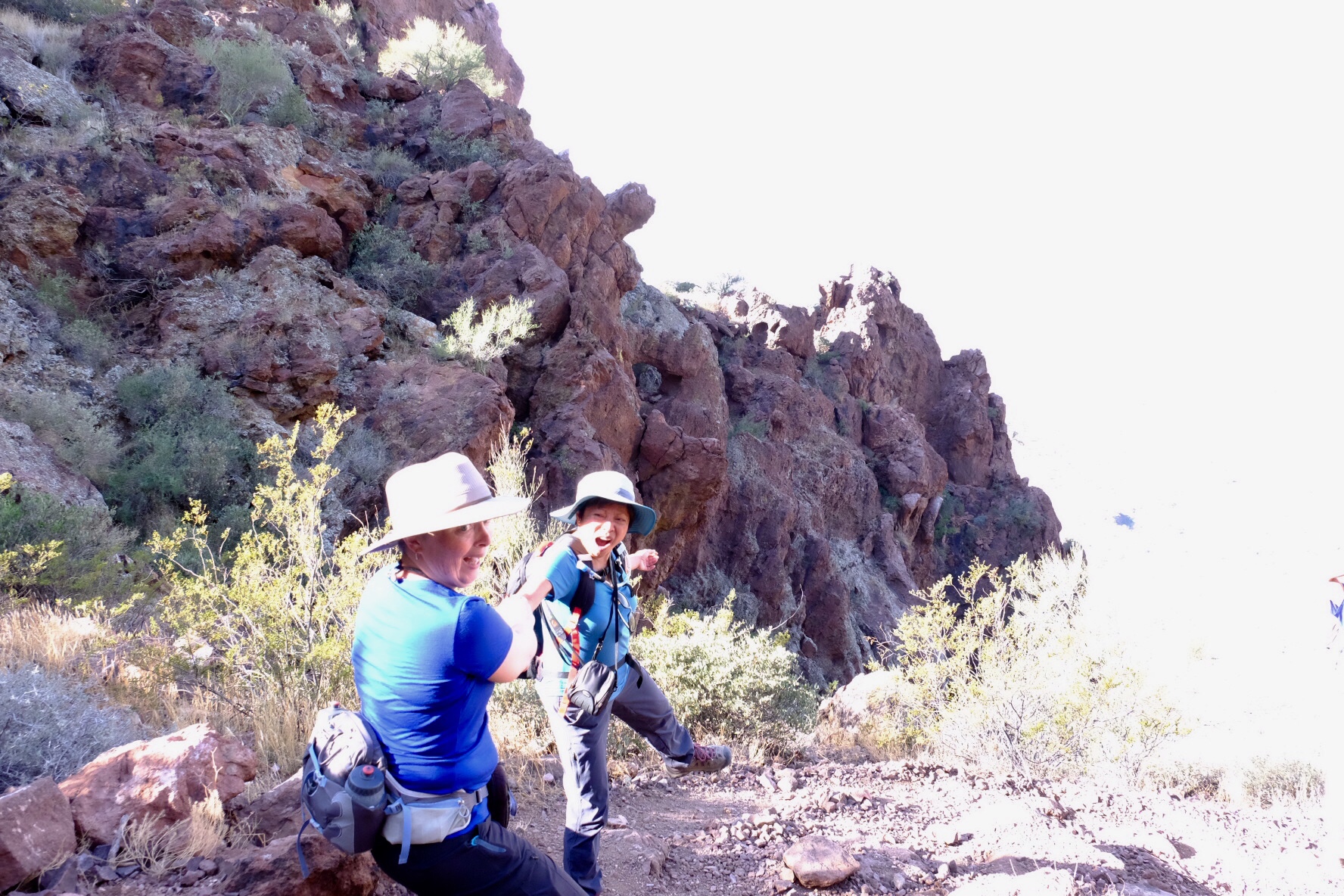 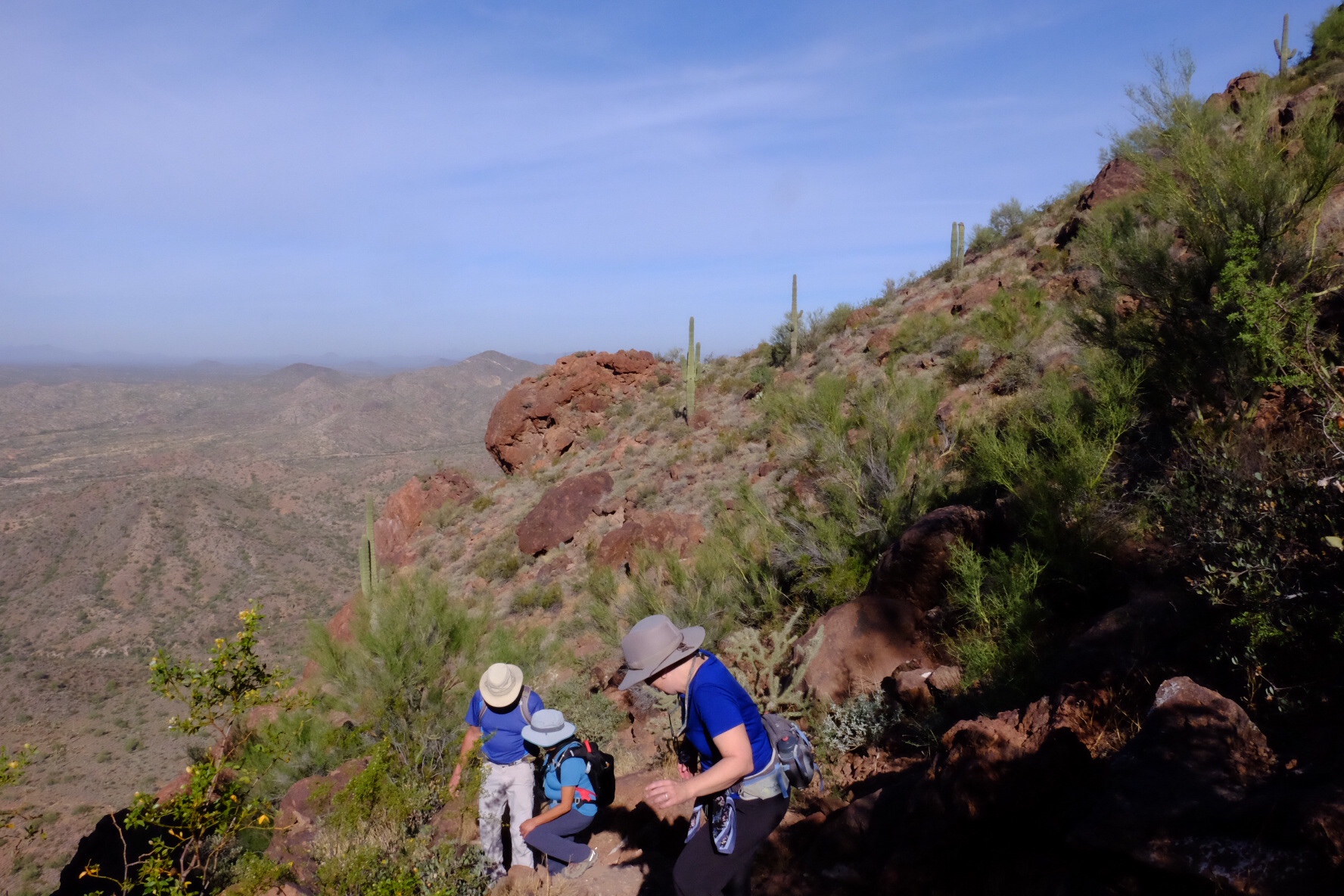 ML and I demonstrating the Shortie Struggle.

It really wasn’t as terrible coming down as it seemed like it would be going up, and I wasn’t ultimately sad to have left my poles behind since they wouldn’t have worked well on the hard rock surfaces. You’re off the hook this time, ML!

Once we’d returned to level terrain, we took a slightly different path back to the cars, making our total hike a four-miler with about 1100′ of gain. We also found a more official trail sign. 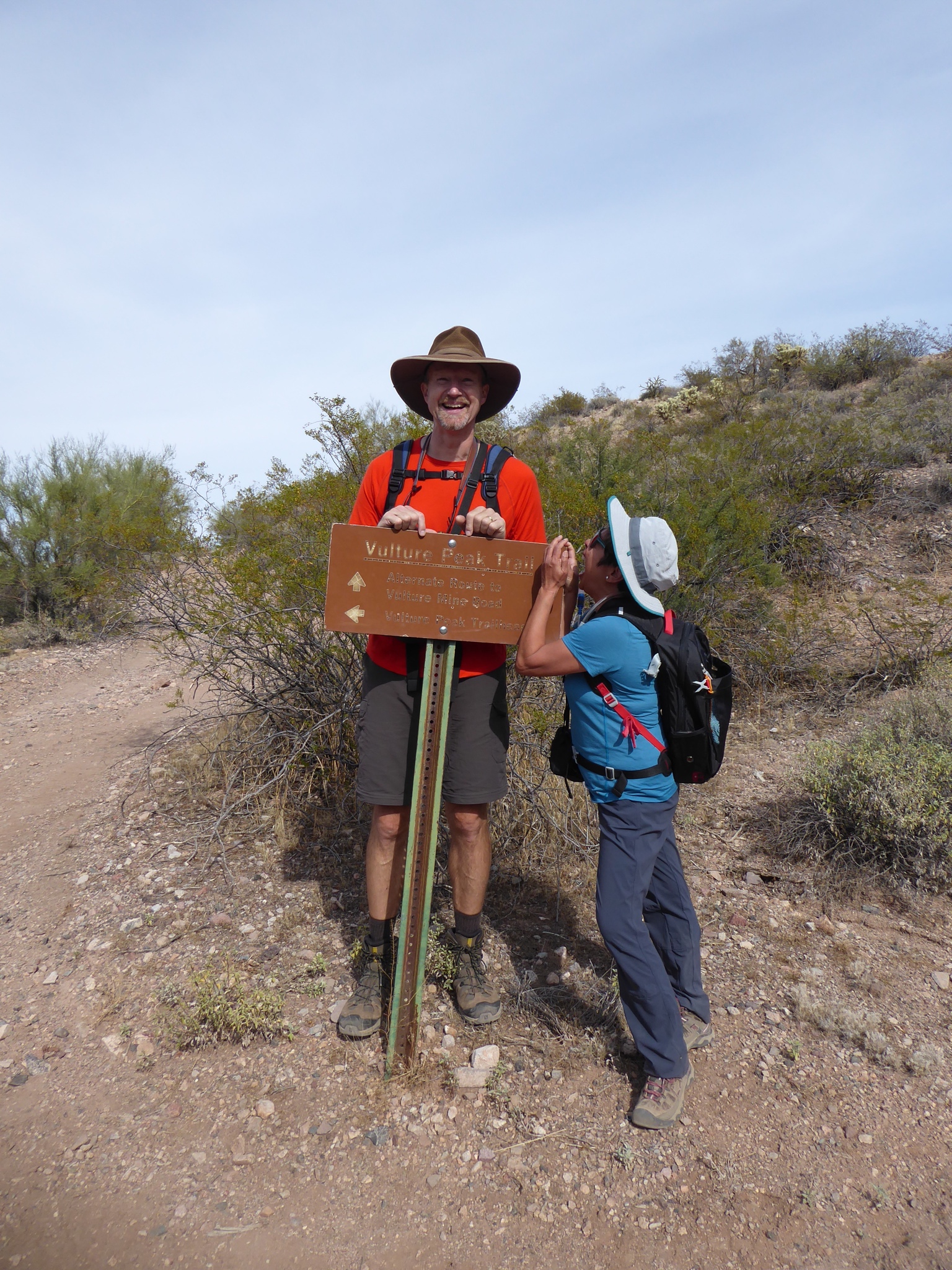 Where I took the most adorable sign picture EVER!

The day was young, and we had plans for lunch at a local Mexican place the Lowes enjoy. 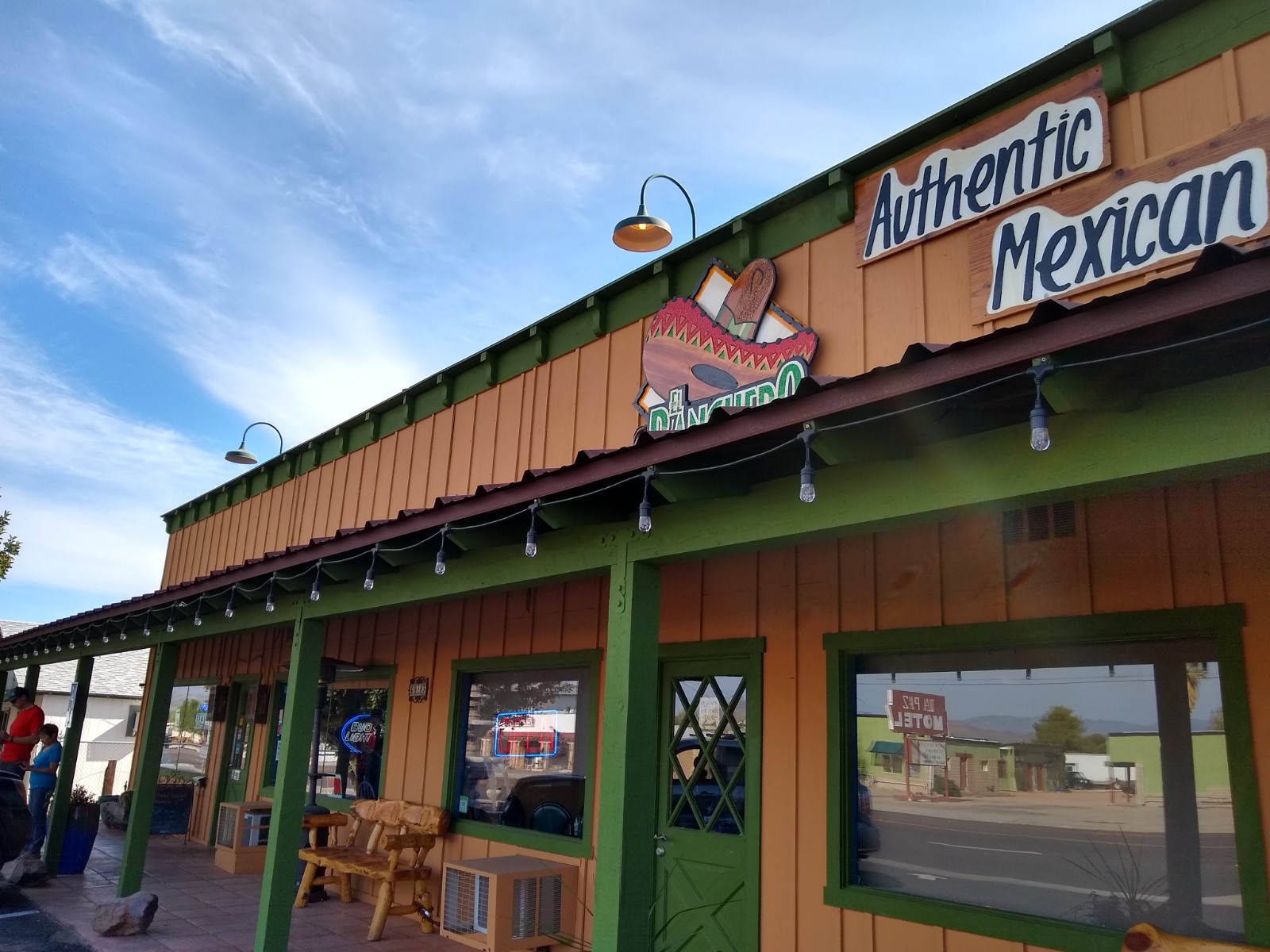 It was delicious, and we stuffed ourselves with authentic goodness. Afterwards, we headed back to Betsy for beverages, dessert, and more belly laughs. I don’t know how it could have been a better day — even though more great news was waiting for us at home (foreshadowing alert!!)  We have inked our calendars with plans for additional festivities in the very near future. 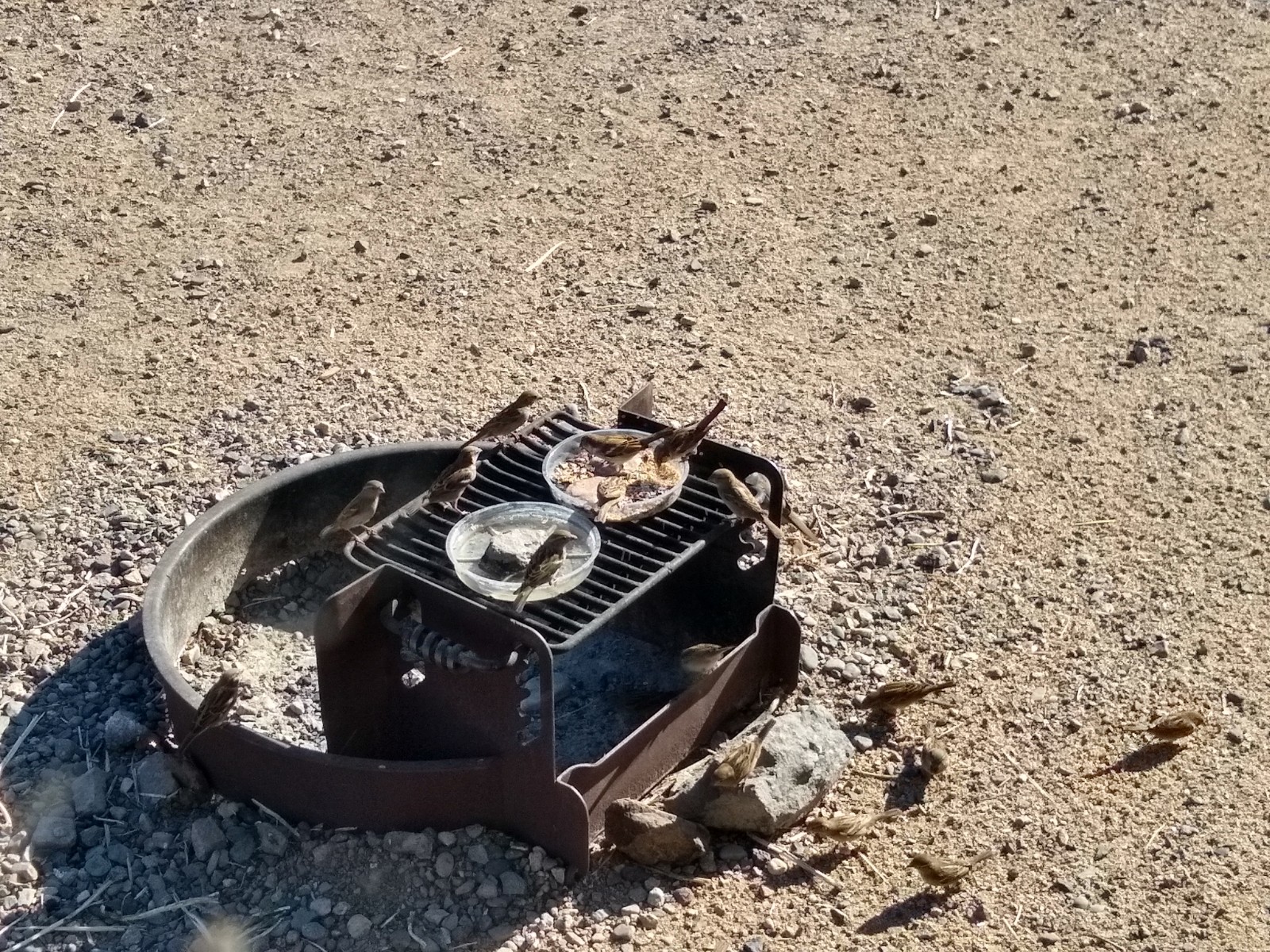 I guess our fire pit was just as annoying as those with stinky fires.

Back at our place, in between bigger hiking days, I enjoyed watching my birdies, and taking a near-daily walk up the hill to check in on the critters in the Discovery Center. The last day I walked up, I happened to arrive at the perfect time to see the feeding of the diamondback rattlesnack with a live mouse. I was the only one there, and the ranger came out to make sure I’d be OK seeing it. Heck, yeah, I said! Most captive snakes are fed dead/frozen food, so this opportunity to watch a live feeding was unique. It gave me an up-close-and-personal idea of just how frighteningly fast the strike happens, and then to witness the inevitable aftermath. I was so tickled to have serendipitously shown up at the right time! Much to the relief of many of you, I’m sure, I hadn’t brought my camera that day, so again, you’ll have to take my word for it. I really fell short on the critter photos this time, didn’t I? I’ll try to do better in the future. 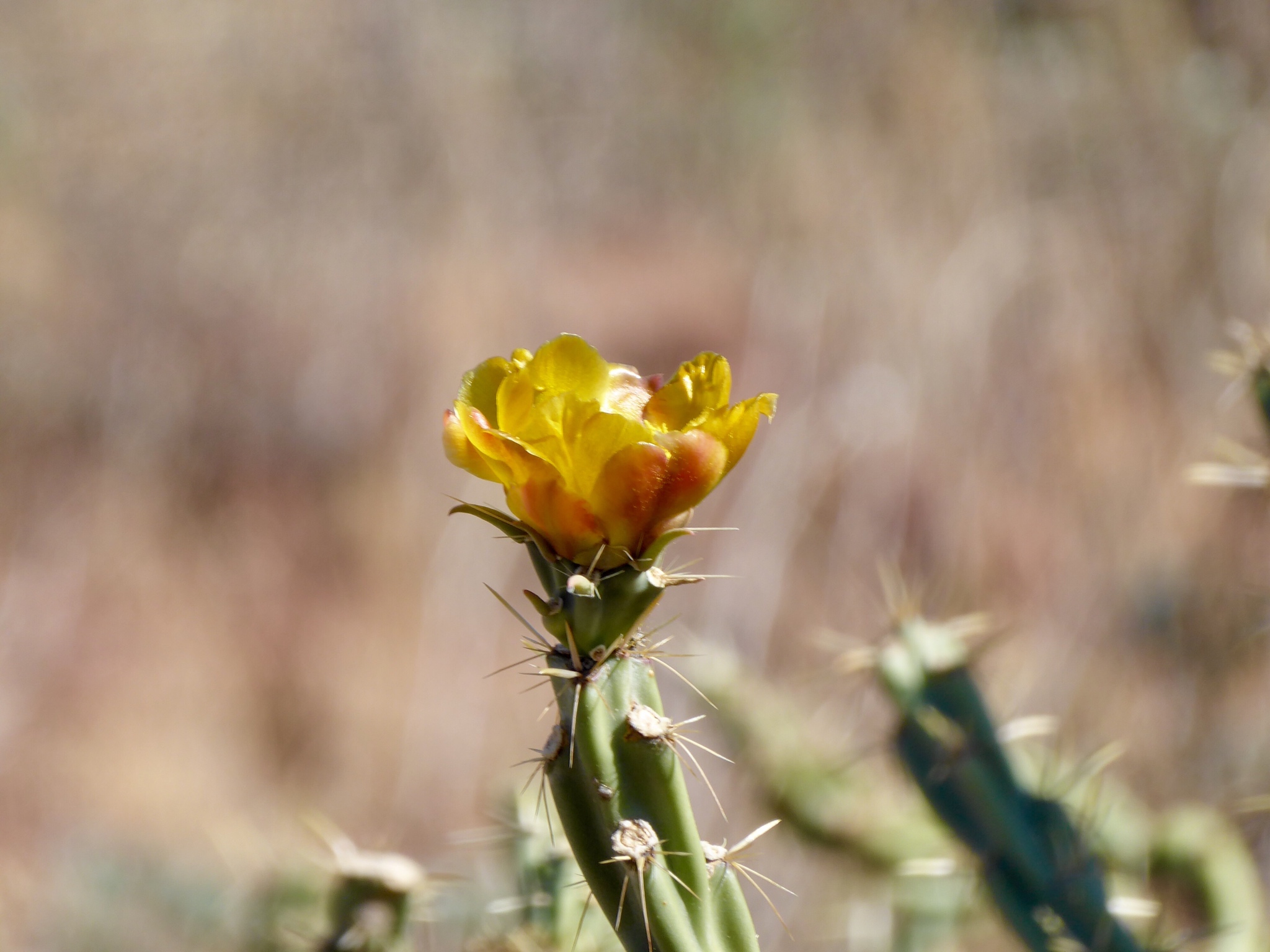 Please accept this late-season cholla bloom as an apology.

For our last hike, we stayed in the park and accessed the Beardsley Trail from our site. 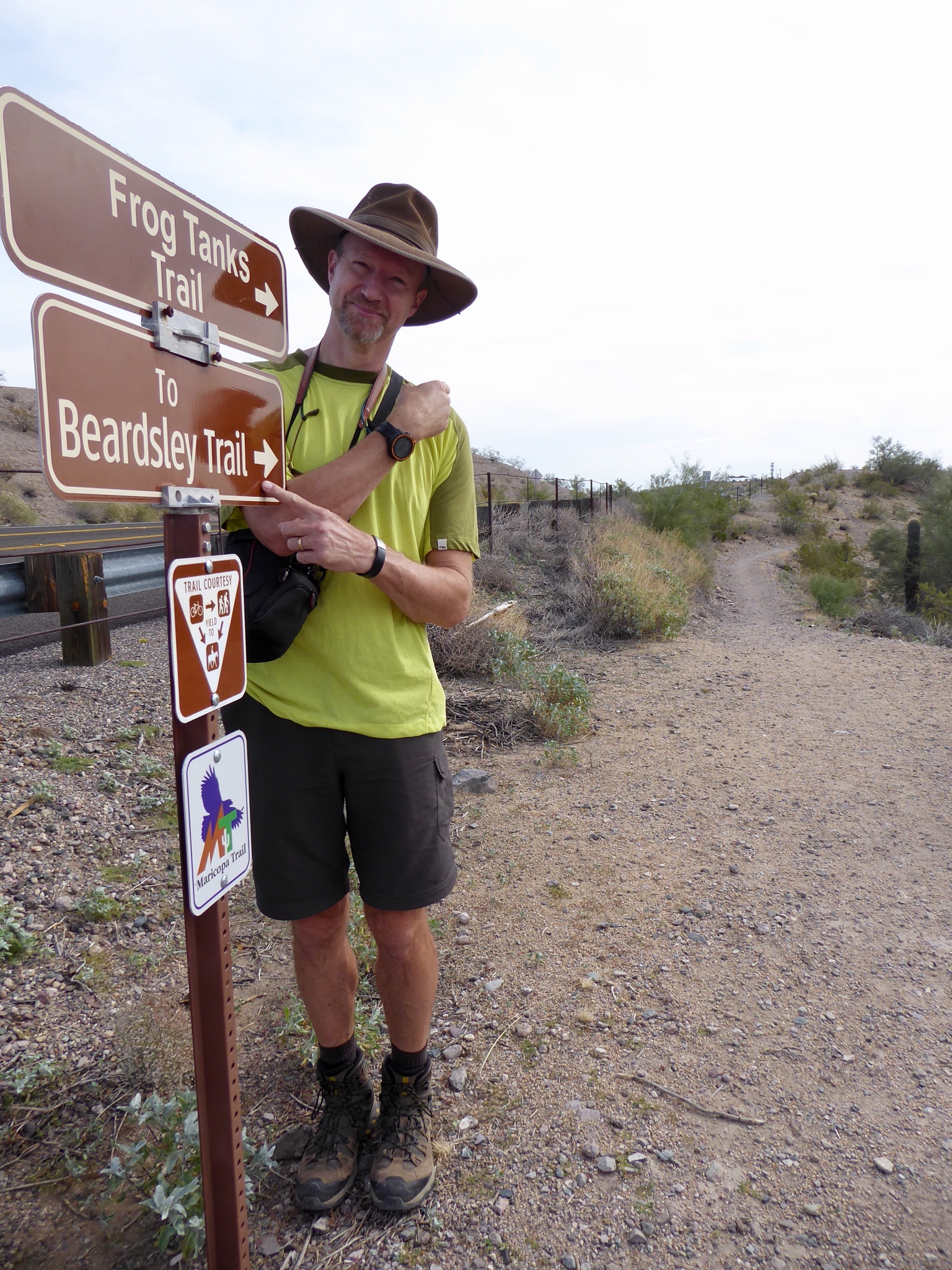 Not just for those with beards! Or frogs!

It wasn’t a very interesting trail at all. It was mostly a flat walk in the desert. 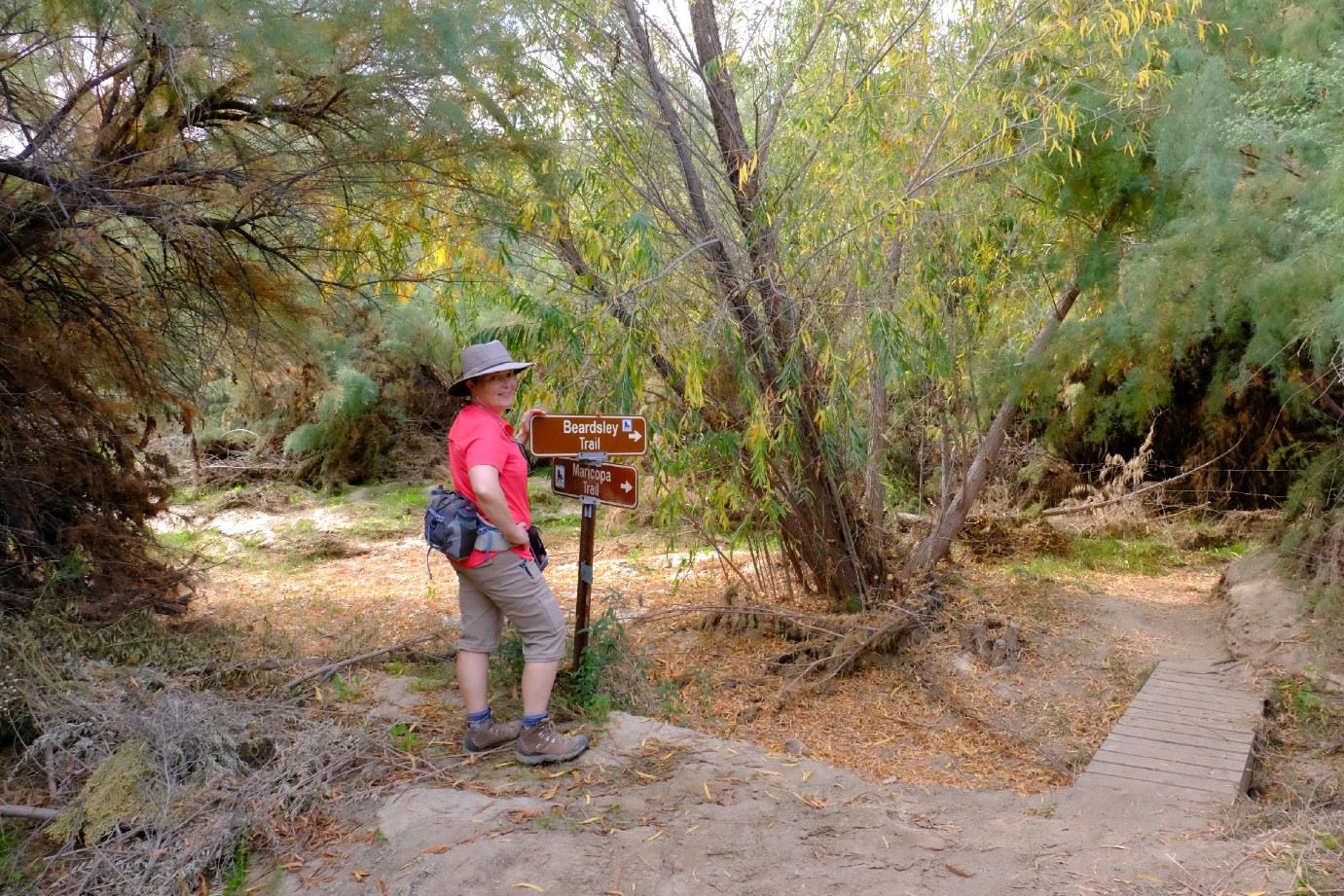 Except for the place where we turned around.

Suddenly the trail entered a humid, tree-covered area that felt like we’d stepped into a greenhouse. It helped save the six-mile hike from being a complete snoozer.

Now for the BIG NEWS!

We applied and interviewed for, were offered, and have accepted volunteer positions with the NPS at the Northern Great Lakes Visitor Center near Ashland, WI next summer! It will be a very different experience to our summer in the Gila, but we are excited to be a part of all the NGLVC has to offer as well as spend time in a new geographical environment. It also sets us up perfectly to drop down into Ohio afterwards to spend some time with my family.

Until then, we have almost half a year yet to fill with adventures, and while it is exciting to plan and anticipate, one of my life rules is to never wish time away. 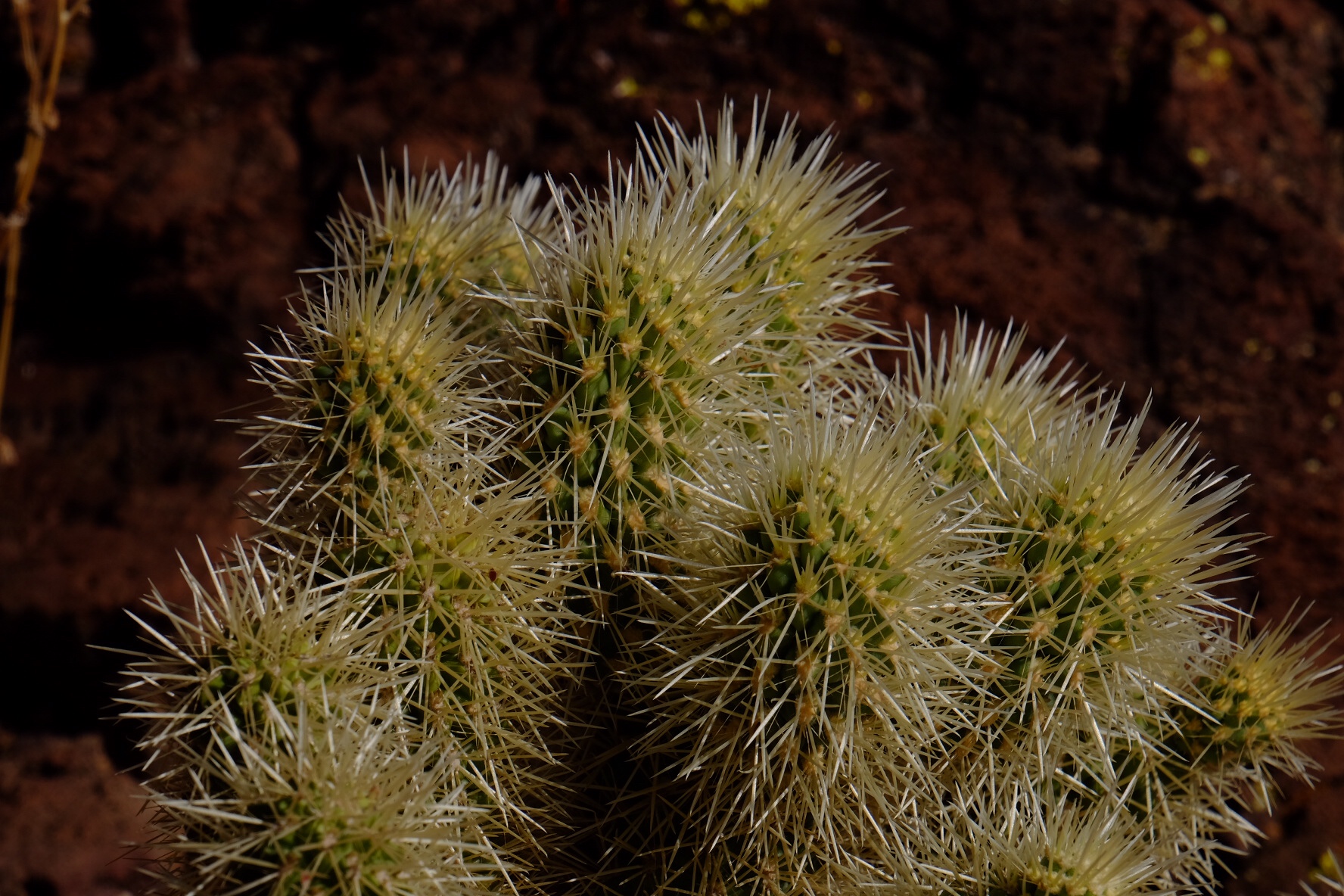 Even if it gets prickly.