If anyone wondered whether I’d ever drive Essie again, wonder no more, I did it all on the trip from Lake Pleasant to here. I hadn’t driven since before last summer, and we figured I’d better renew my skills before I regressed to being terrified at the mere thought. It wasn’t a long drive, but it included maneuvering between traffic delineators (new term alert!), squeezing through the park entrance gate, pulling into the dump station, and backing into our site. 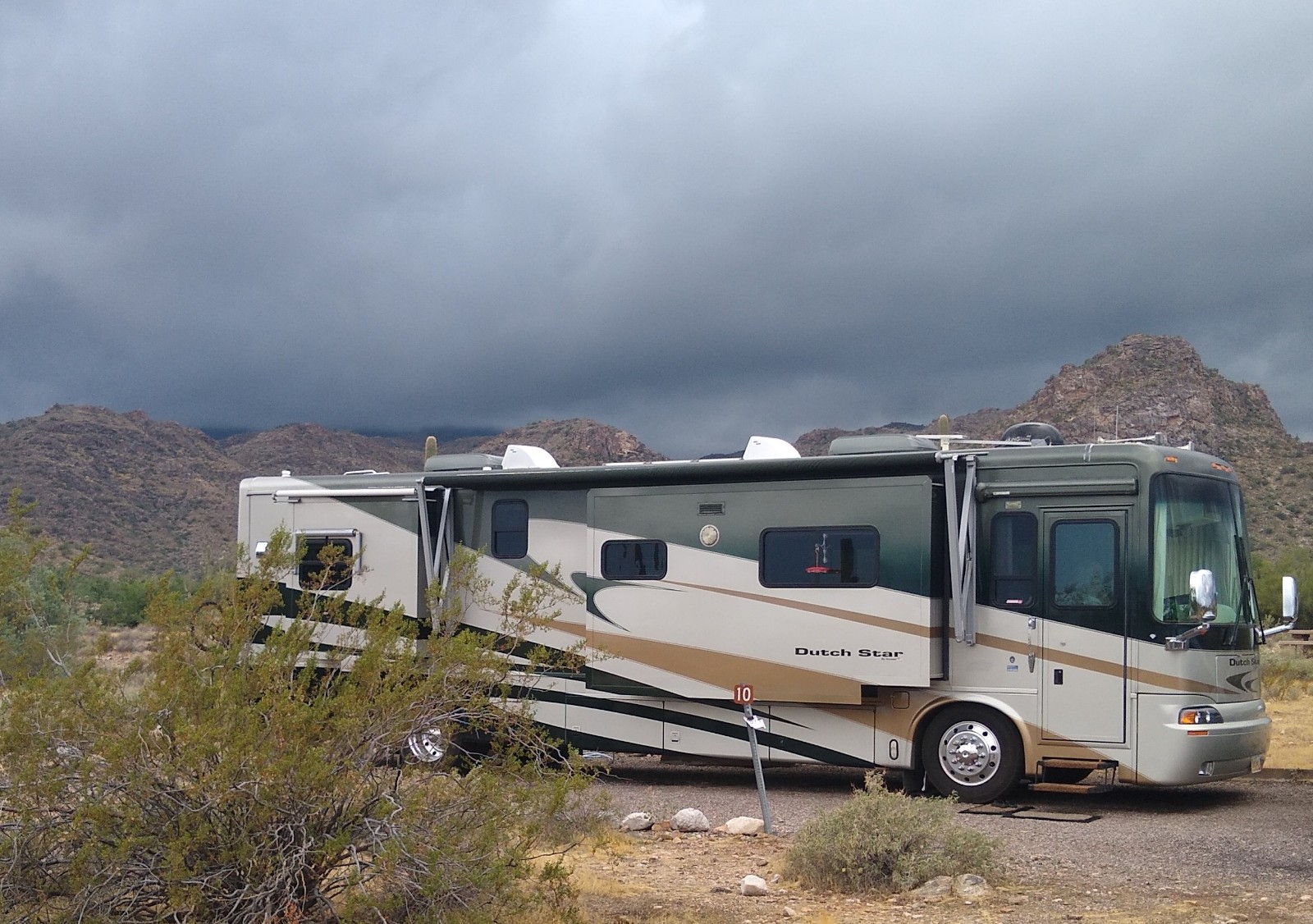 The stormy skies you see in this photo didn’t actually show up for a few days, though something else almost immediately did. 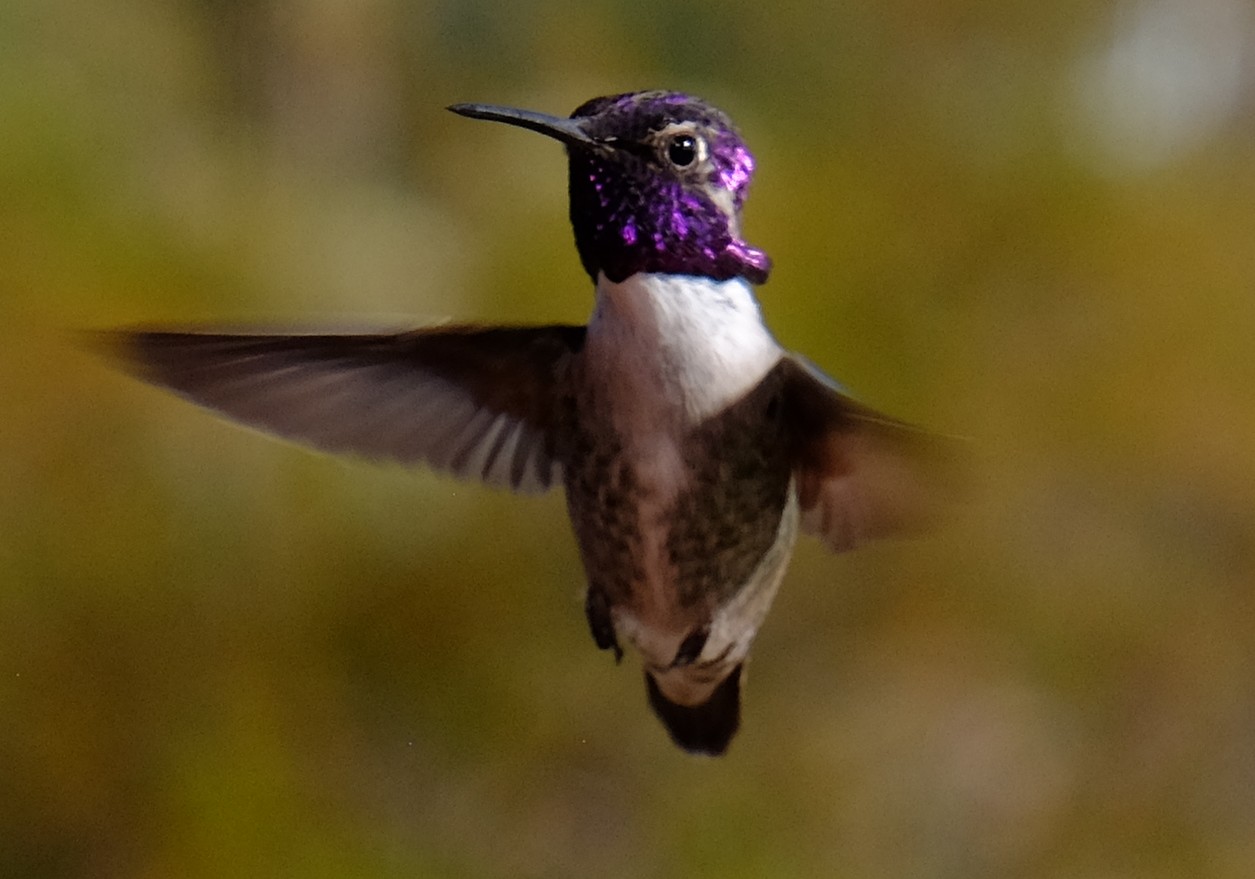 Although we’d seen this variety with their flared royal purple gorgets twice before, both times in Palm Springs CA, this was the first time I’d had one visit my feeder.

Since we didn’t have a long drive, that left us enough of the day to make a grocery run and take a short trail walk. The mountains blocked our sunset views at this park, but the skyscrapers of Phoenix blazed like the city’s namesake. 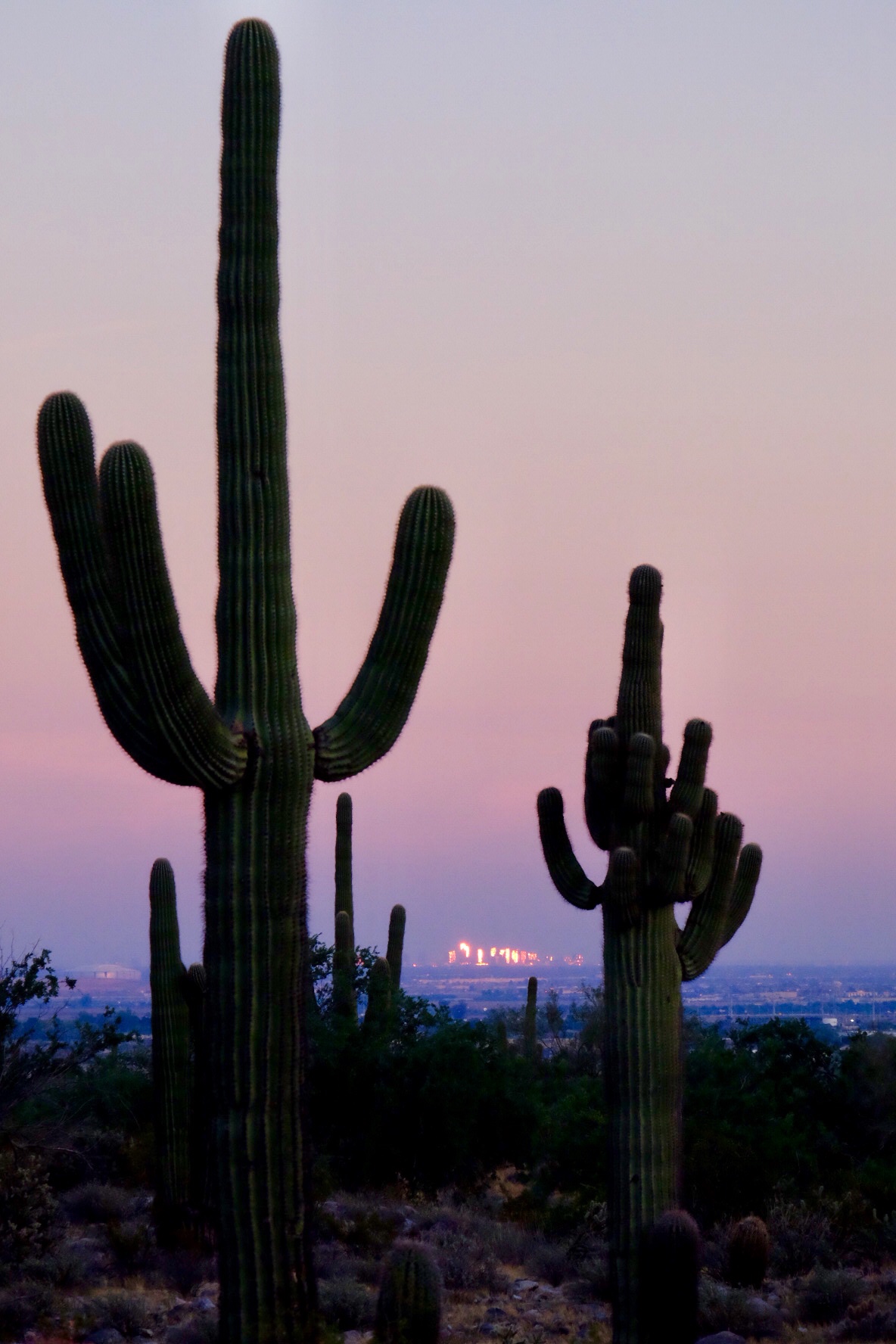 Unlike the last park, the campground here was not close enough to the Visitor Center for a daily walk. Reaching it on foot required a 7.8 mile trek, which we happily did the next day. 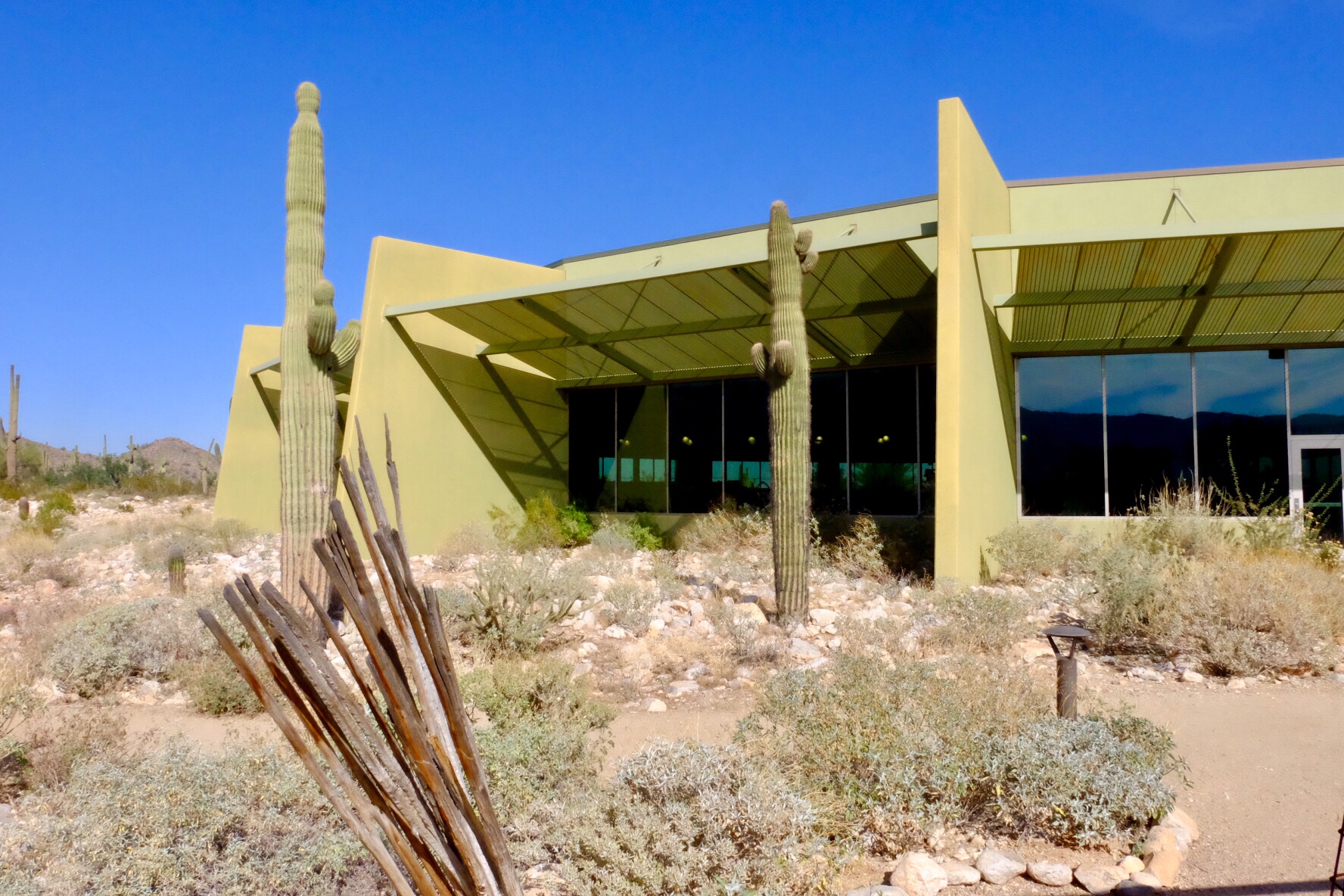 VC or regional library? Why, it’s both!

We checked out the critters (three types of rattlesnacks, king snake, gopher snake, Gila monster, bark scorpions, desert hairy scorpion, and a hibernating desert tortoise,) filled our water bottles, and had a snack at a shady table on the patio.

The weather was getting set to change, so we got out ahead of it the next day for a ride to the Competivie Track. It also happened to be TBG’s birthday, making it the perfect activity. 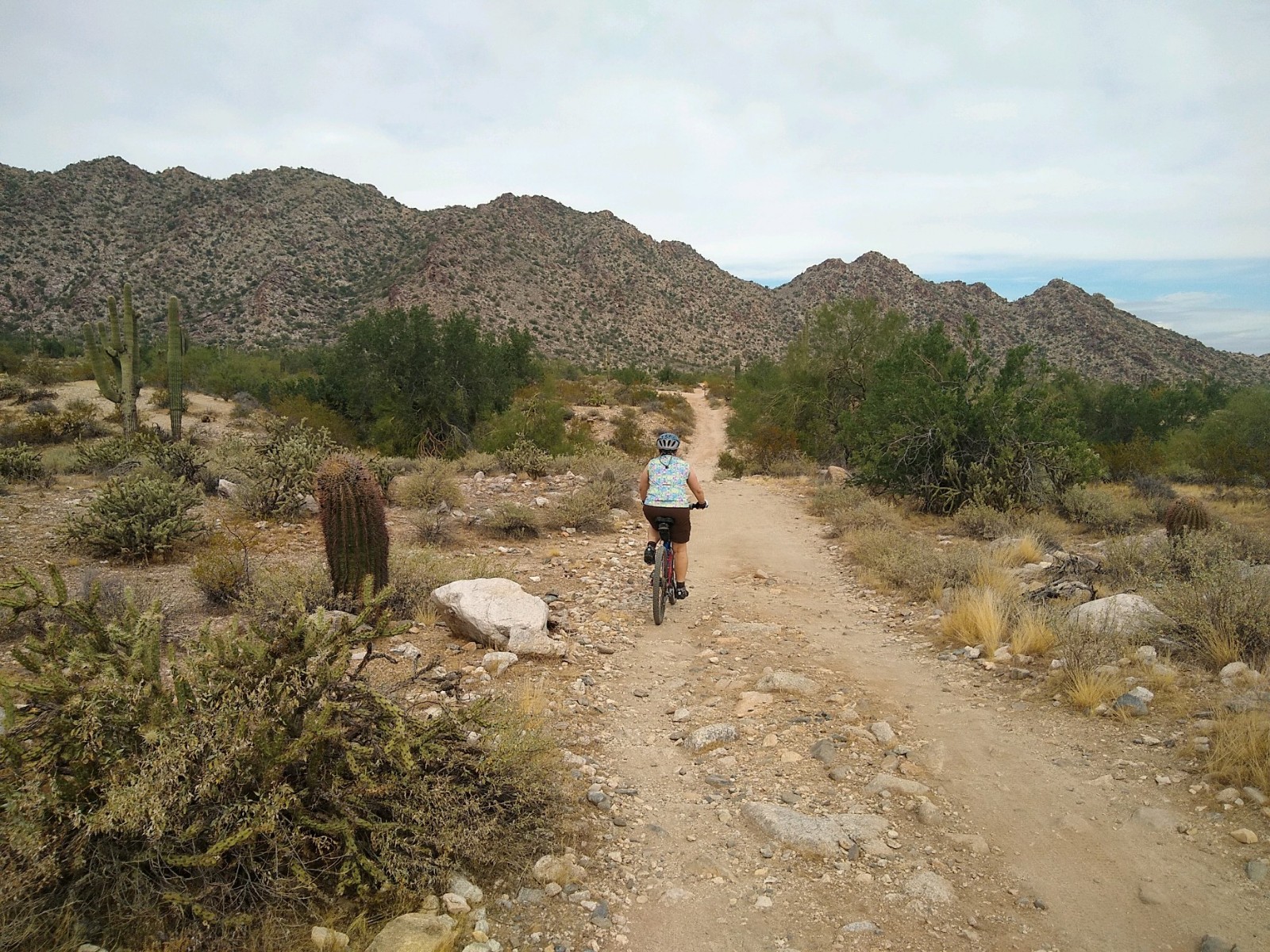 Being that it was a dedicated mountain bike track, I wrongly assumed it would be mostly rockless. It was not, but I only chose to walk a few short downhill sections, and I gifted TBG a grumble-free birthday ride. 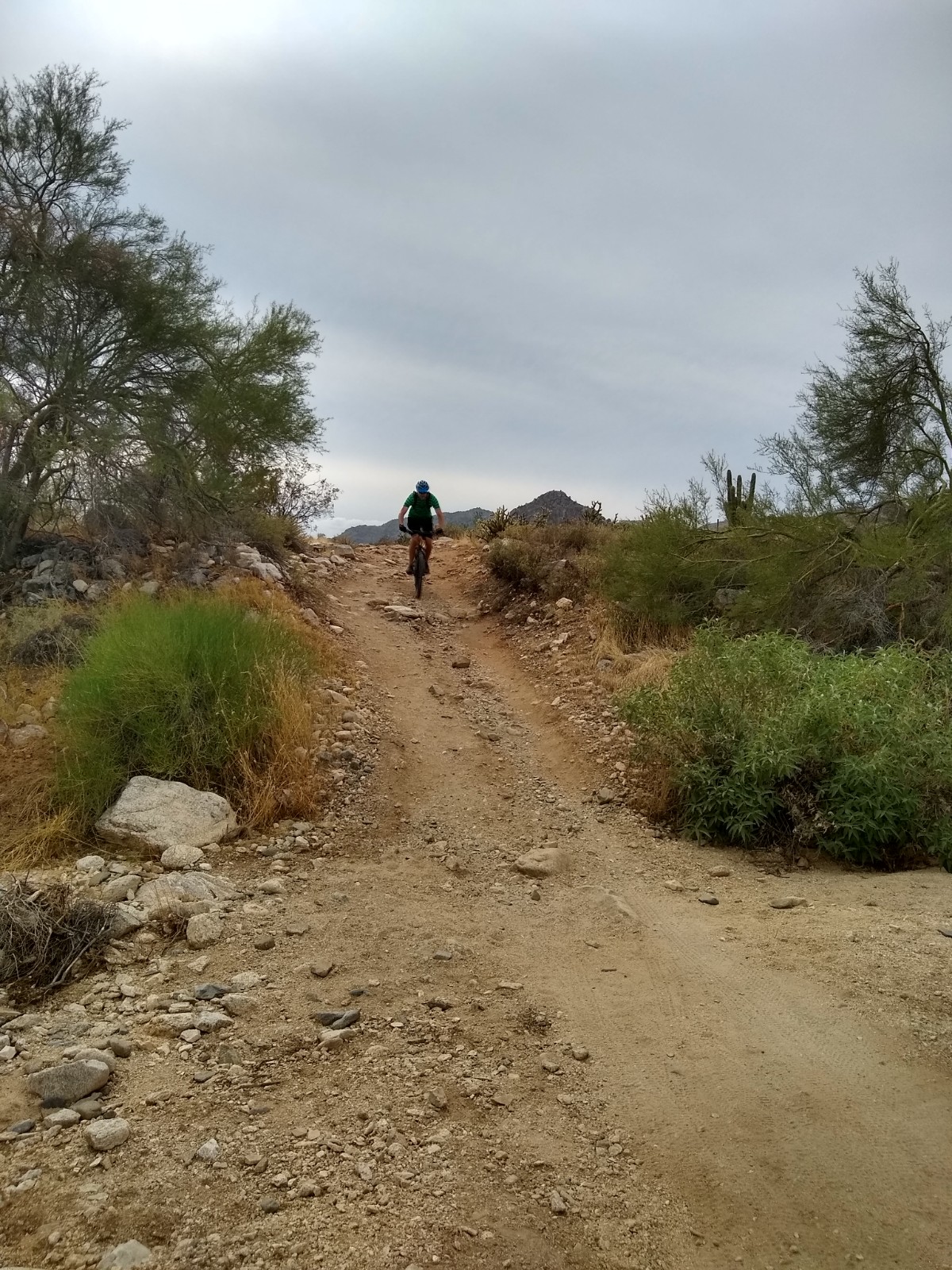 Then the rains came, 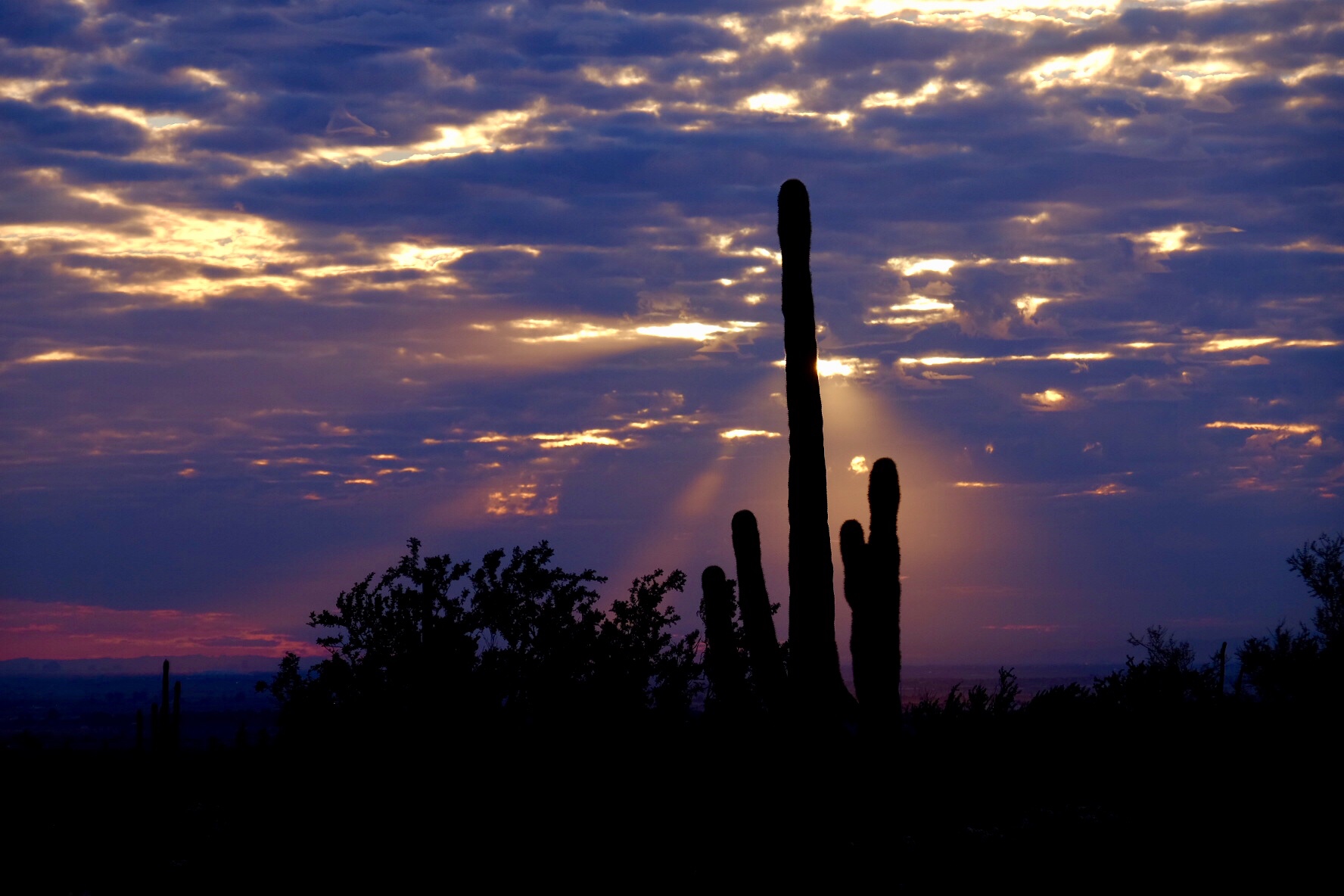 There were flash flood warnings in all the surrounding areas that, fortunately, did not impact us in our spot, and gave us the opportunity to just stay in and relax. 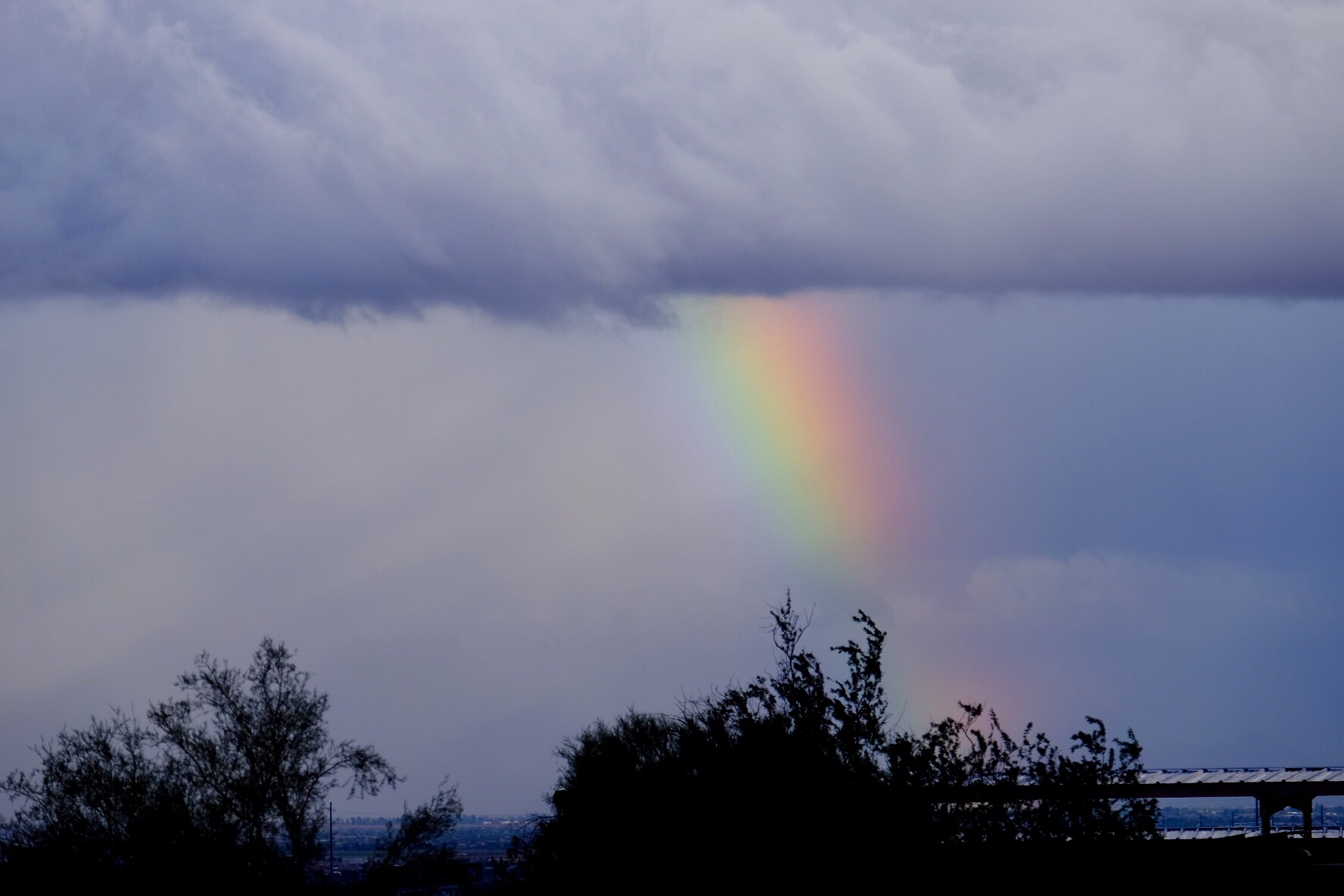 and enjoy pieces of rainbows that showed up about every hour.

Aside from providing a good reason not to venture out, the thunderous deluges had, we hoped, made the waterfall run. We geared up in between downpours to go find out. 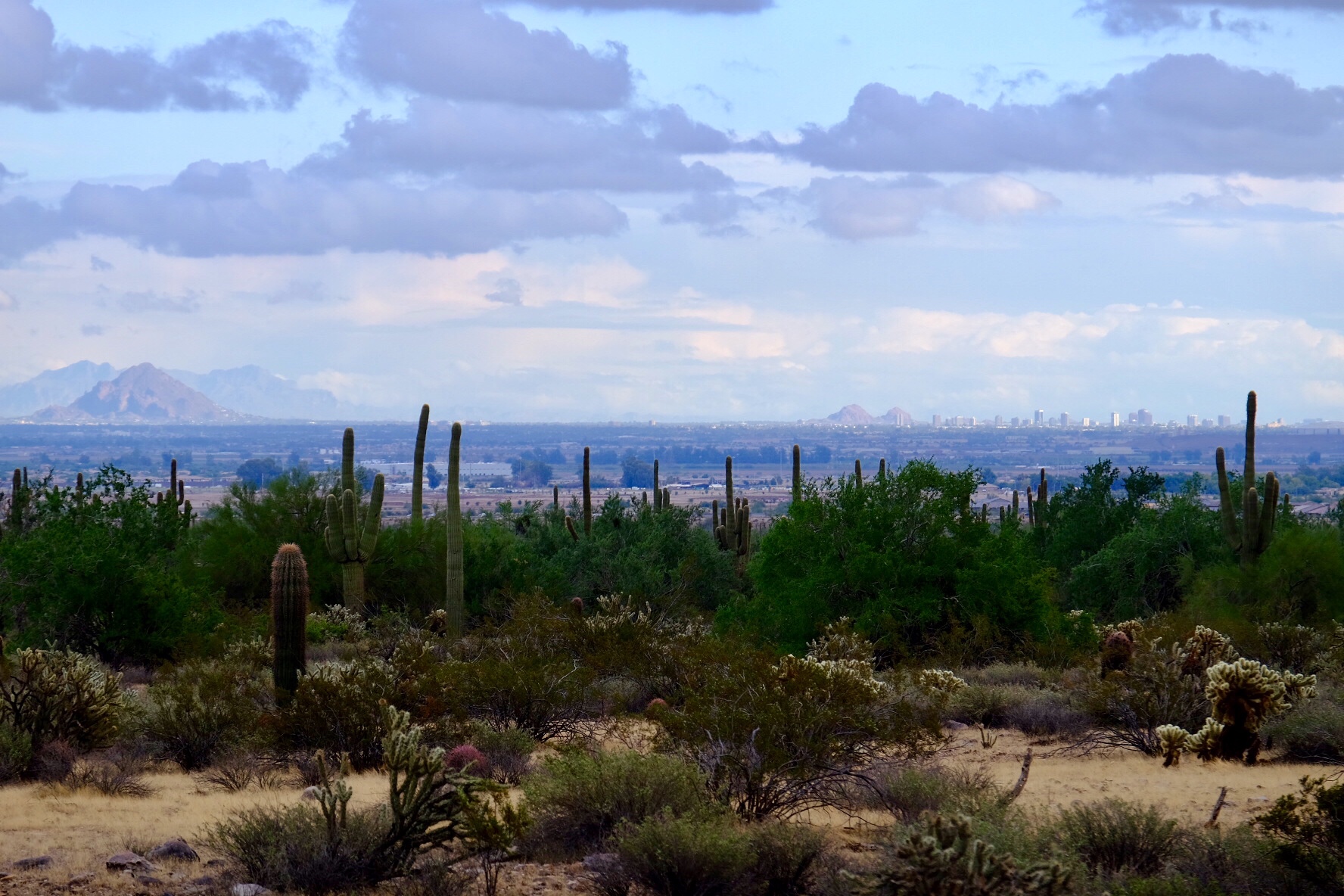 The Waterfall Trail itself is only a mile long, but we walked from our site to stretch our rain-cramped legs for a roundtrip of 5.7 miles. 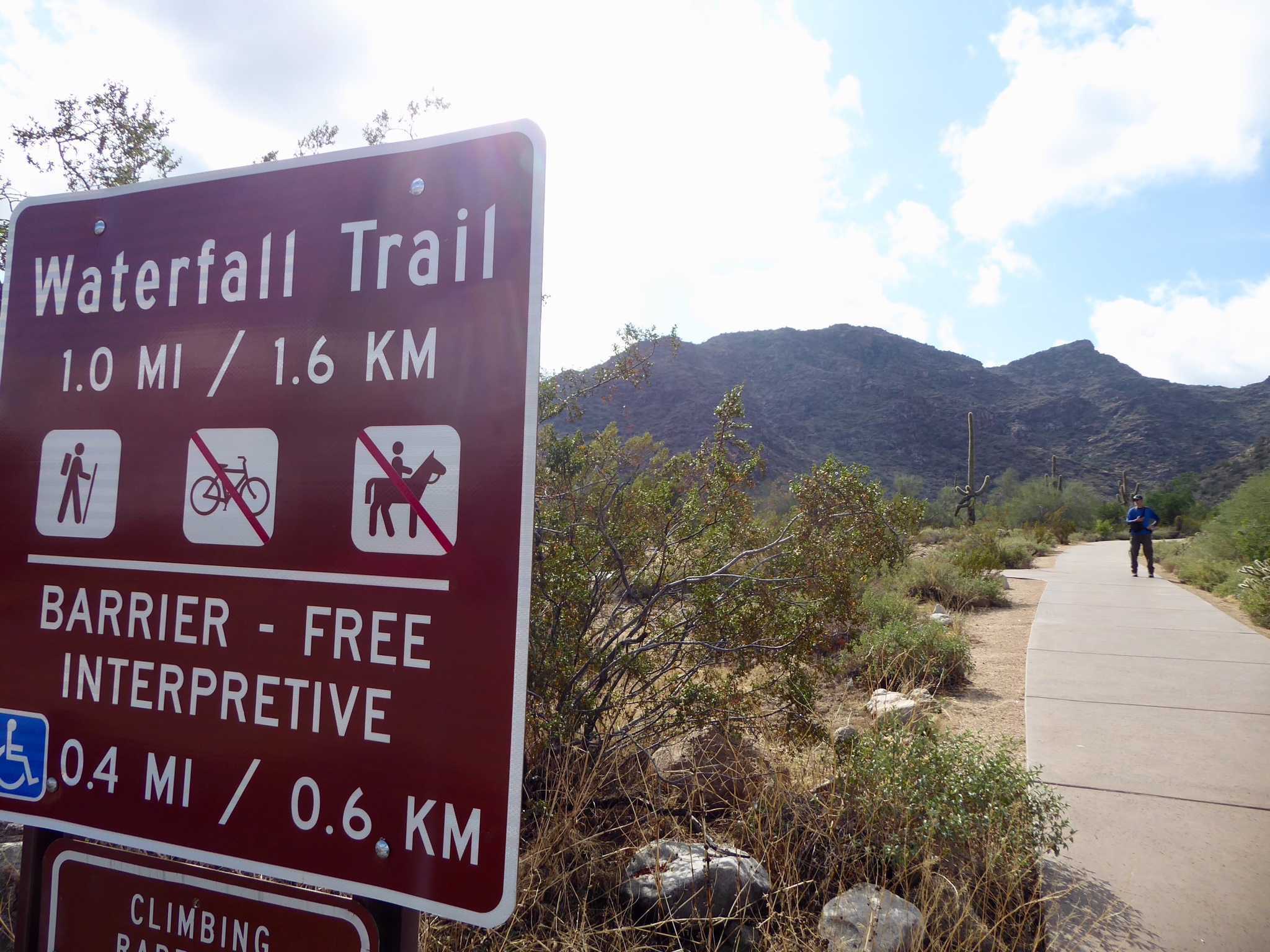 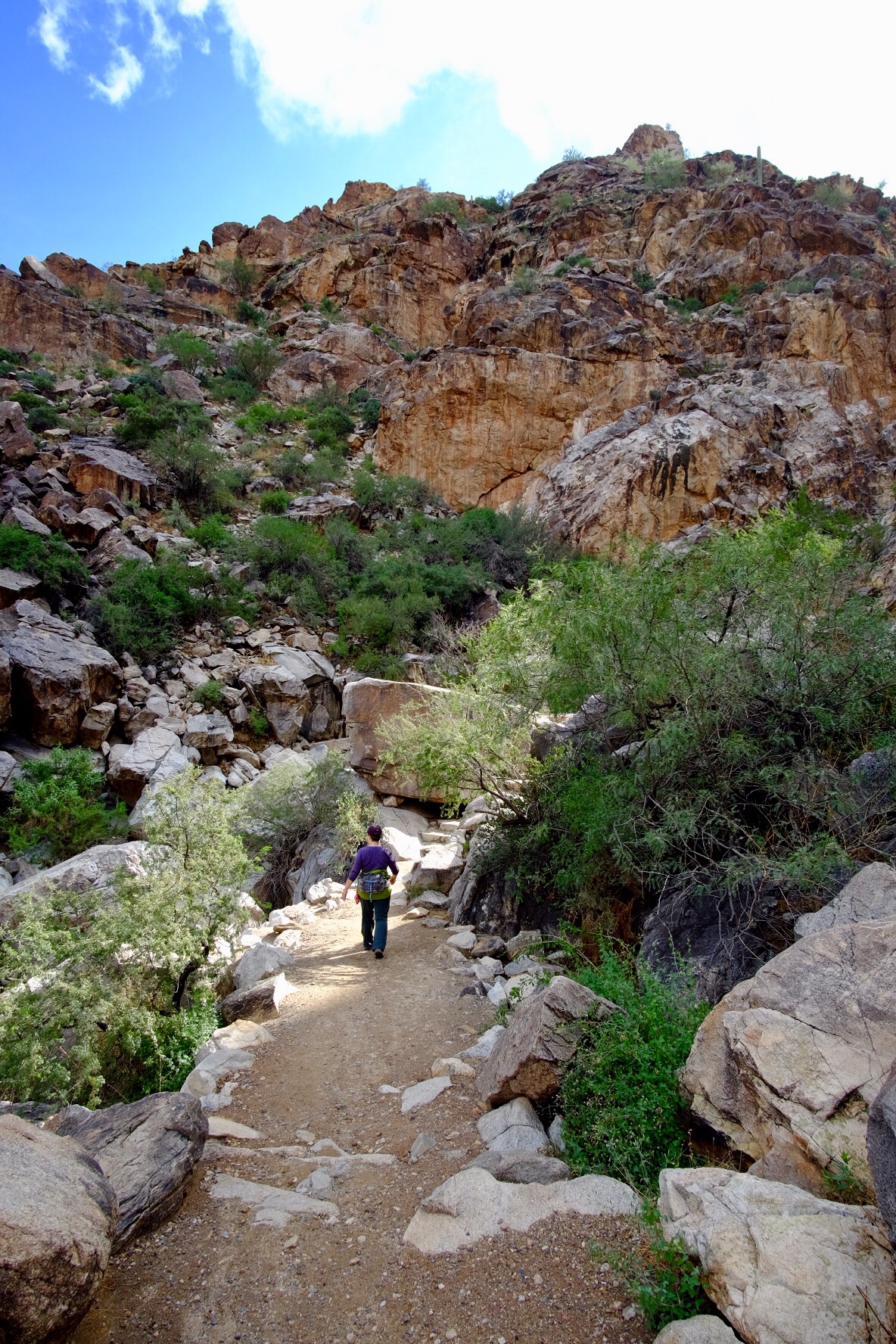 Heading into the beautiful canyon.

Though it looks like it, we were not alone on this trail, since the break in the rain brought out many others like us who were eager to get a peek at the falls. 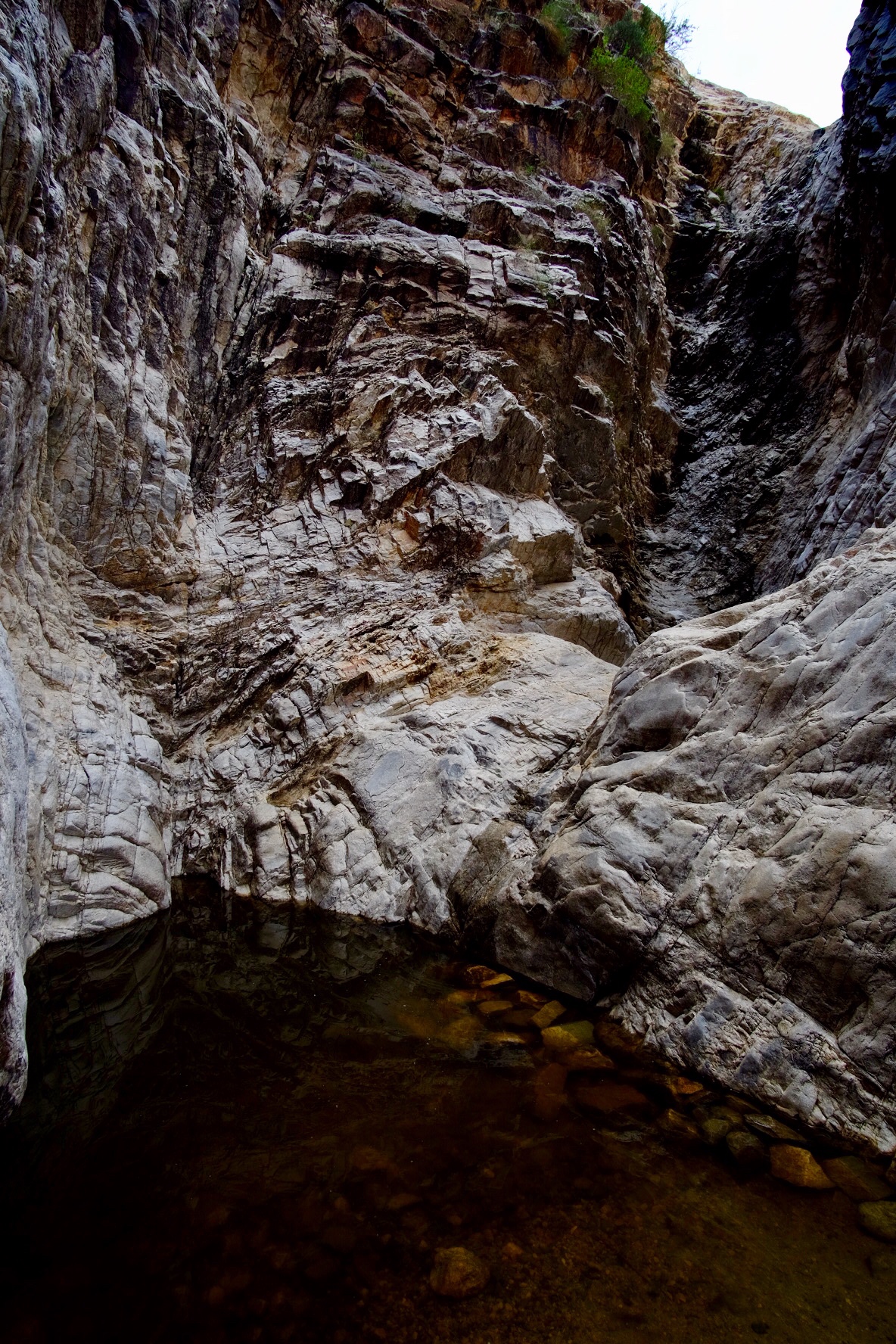 It was hard to believe that all that rain hadn’t created more cascading water. There was water actively running down the rocks forming this pool complete with toadpoles, but the falls we’d anticipated were a bust. We were not at all disappointed, though, since that section of canyon was particularly pretty. 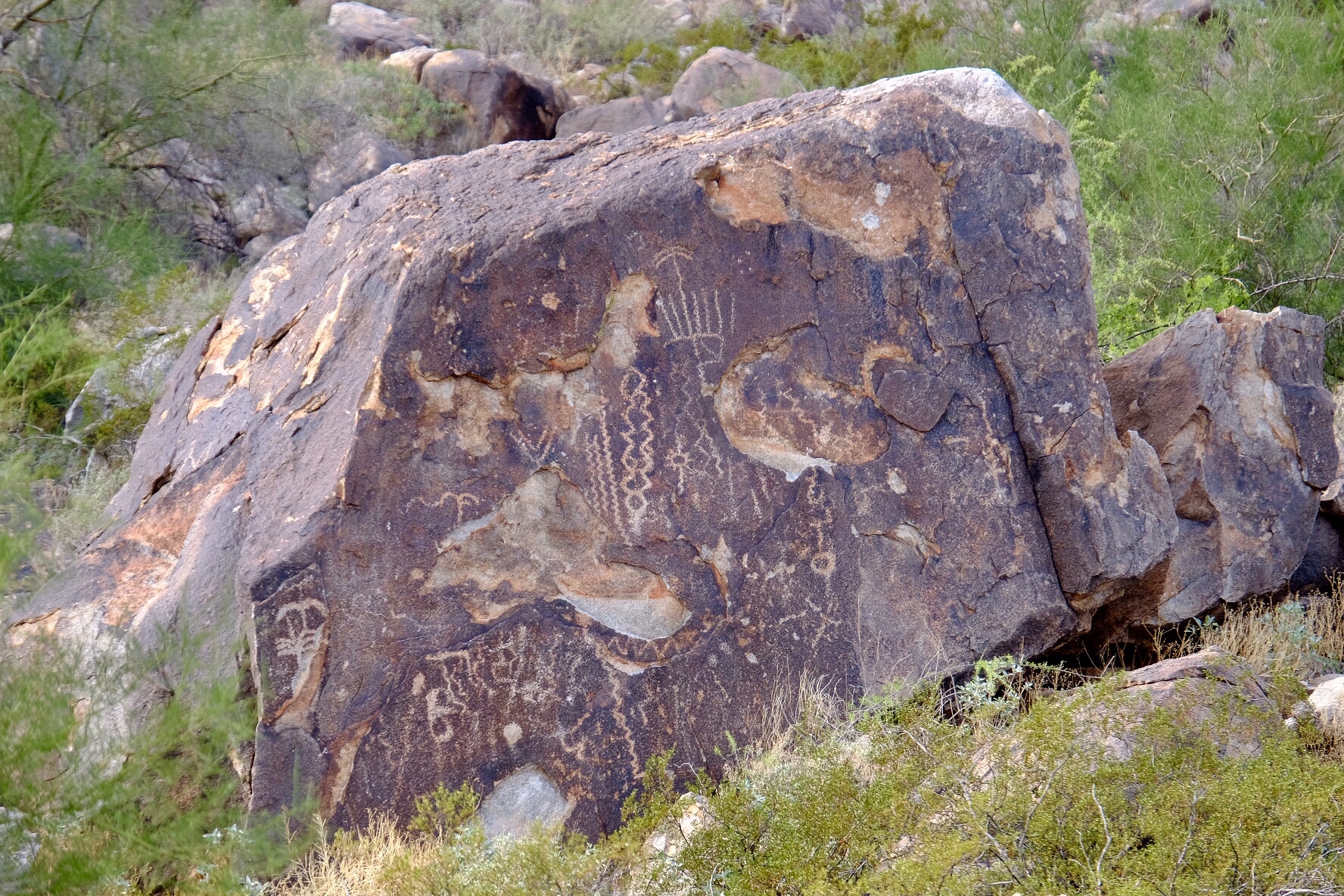 It also showcased a hall of petroglyphs.

Almost as soon as we got back home, the skies opened up again with another round of lightning and thunder. We risked life and limb and took our showers anyhow. 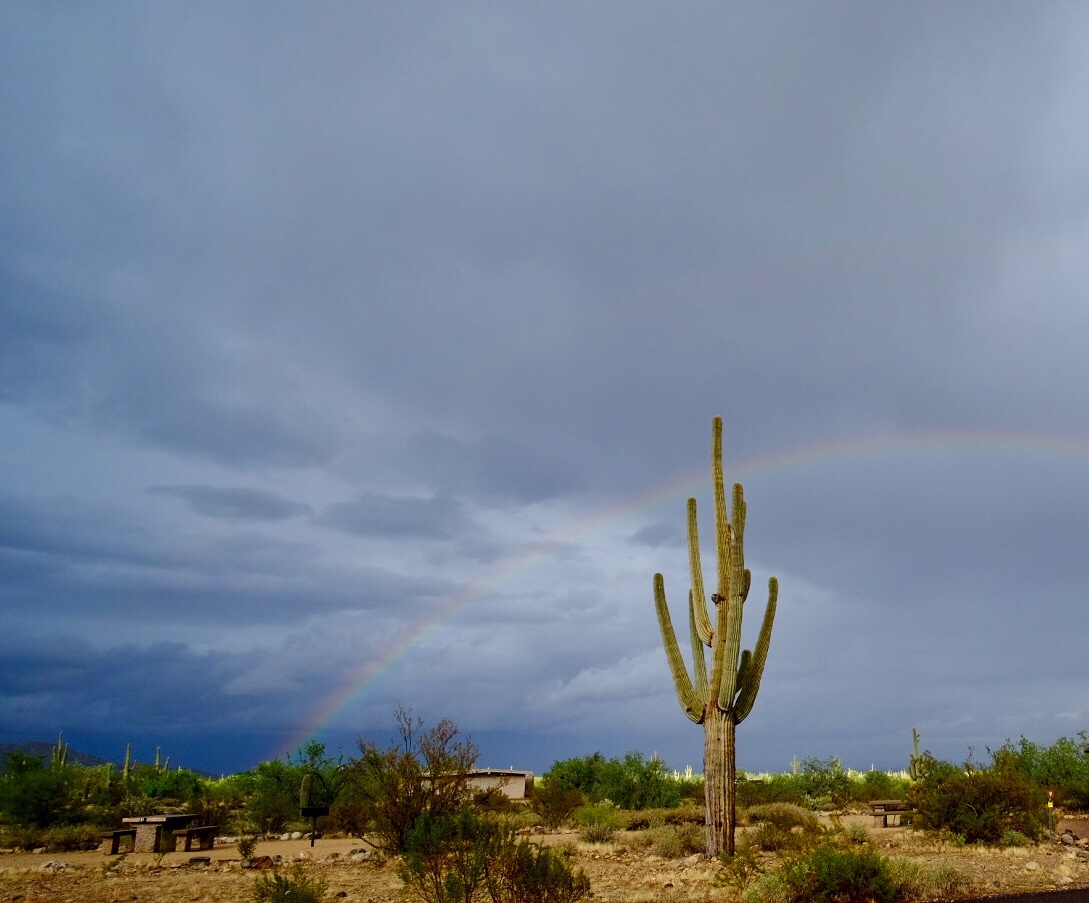 It turned out OK. This time.

You all know to avoid all water during lightning storms — even washing your hands — right? Well, you do now.

You may be asking yourselves if a bike ride was the only birthday treat for TBG. Good question, and no, it was not. In our pre-RV days, I used to make cannoli, TBG’s favorite, from scratch for his birthday each year. The whole process is a bit involved, and not one that is easily done in an RV kitchen, so that tradition had to be put on hold. When I was looking ahead at stores and such in this area, I stumbled upon an Italian bakery that was very near. I told TBG that in between the laundromat in the morning and a family friends’ house for lunch, I was going to plug a location into the GPS, and he was going to go there no questions asked. He asked A LOT of questions.

“Take a right, it’s just down this road.” 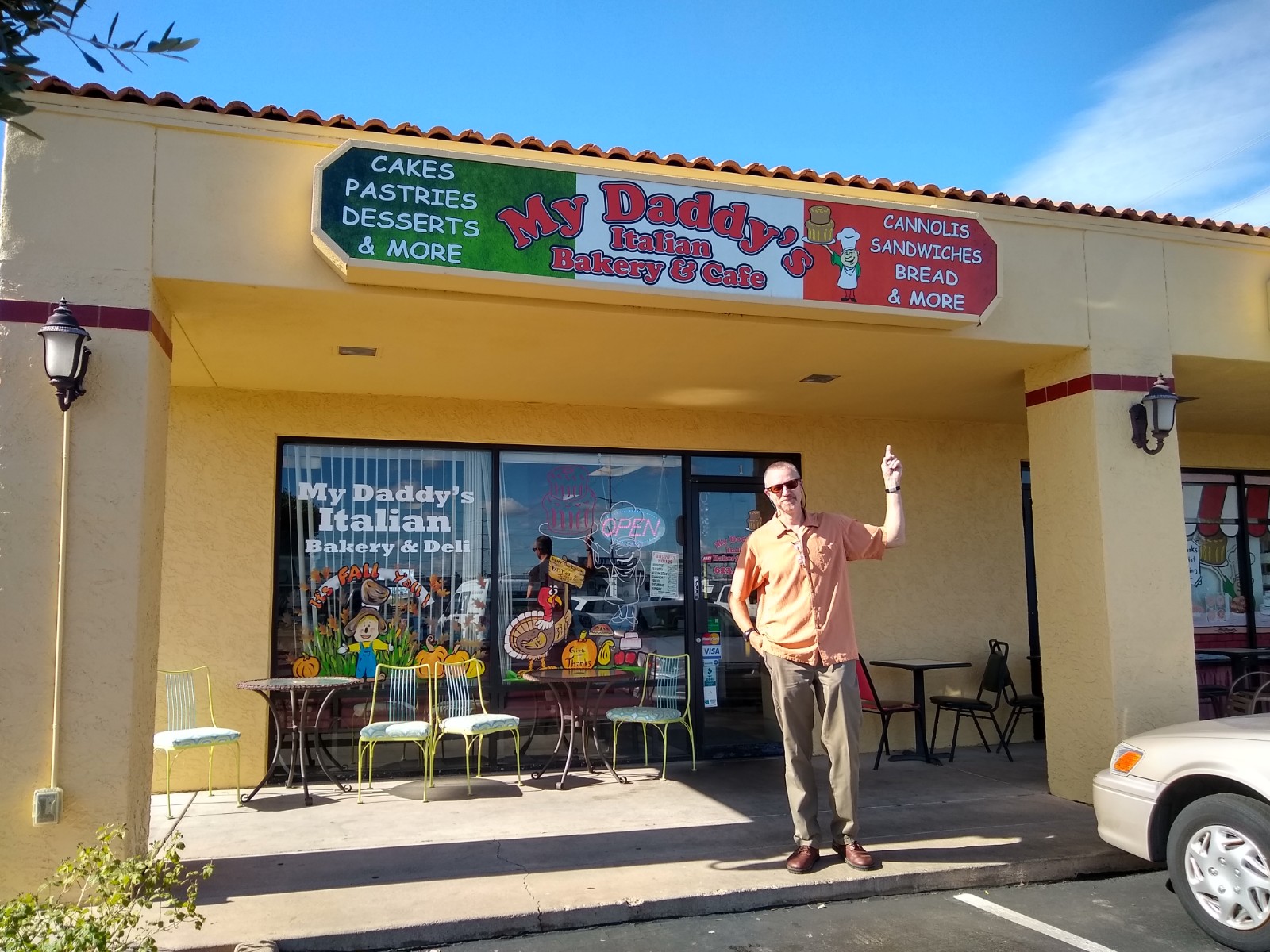 Despite his best efforts to ruin his own surprise, I successfully (and for the last time) managed to surprise him. 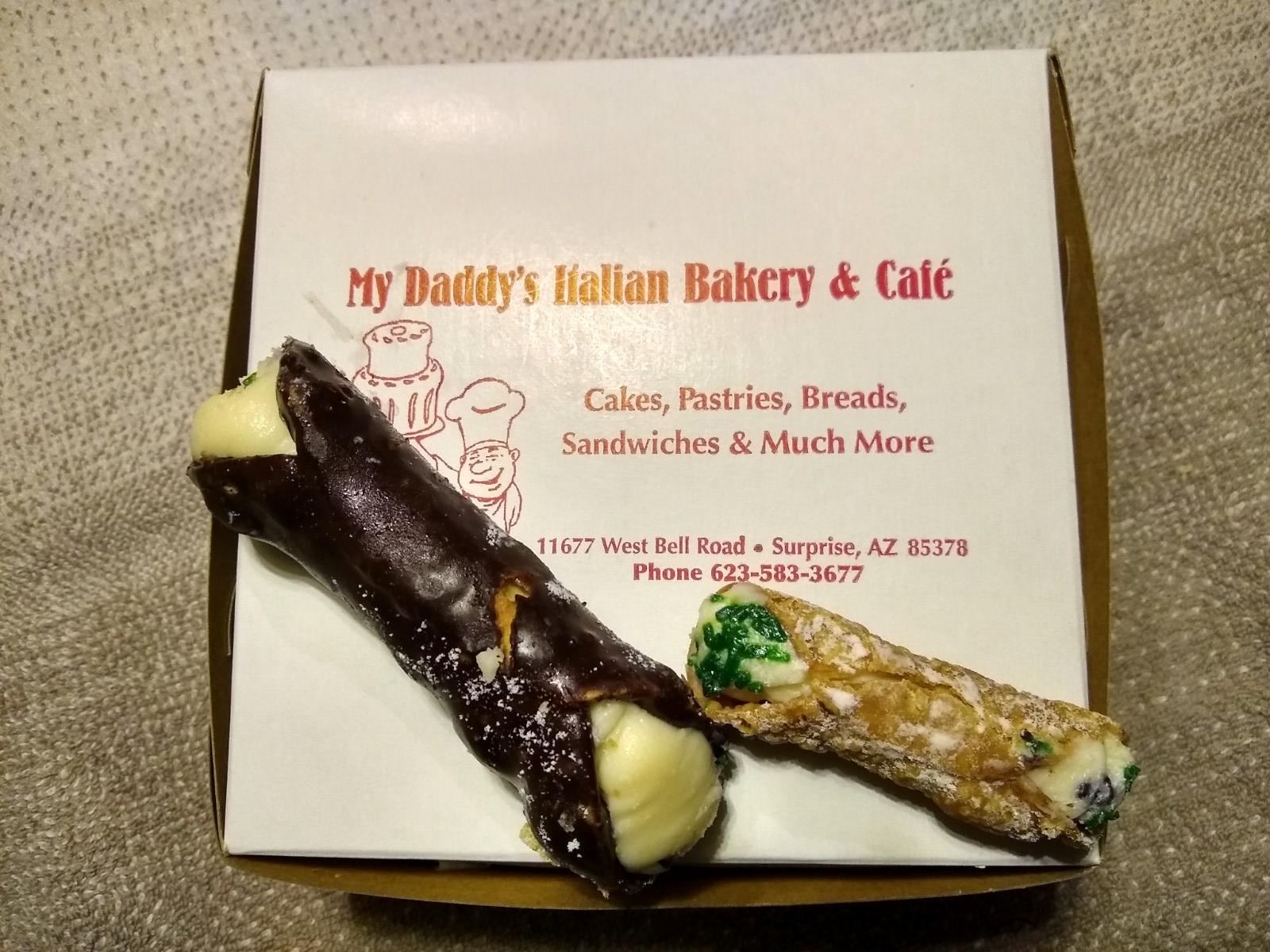 I make better cannoli than your daddy.

They were very good, and we took a box of them to our hostess, but they were not as good as the ones I used to make if I do say so myself. TBG said so himself, as well.

Between our delicious lunch and dessert, we had a lot to work off, and we headed into Ford Canyon to do just that. 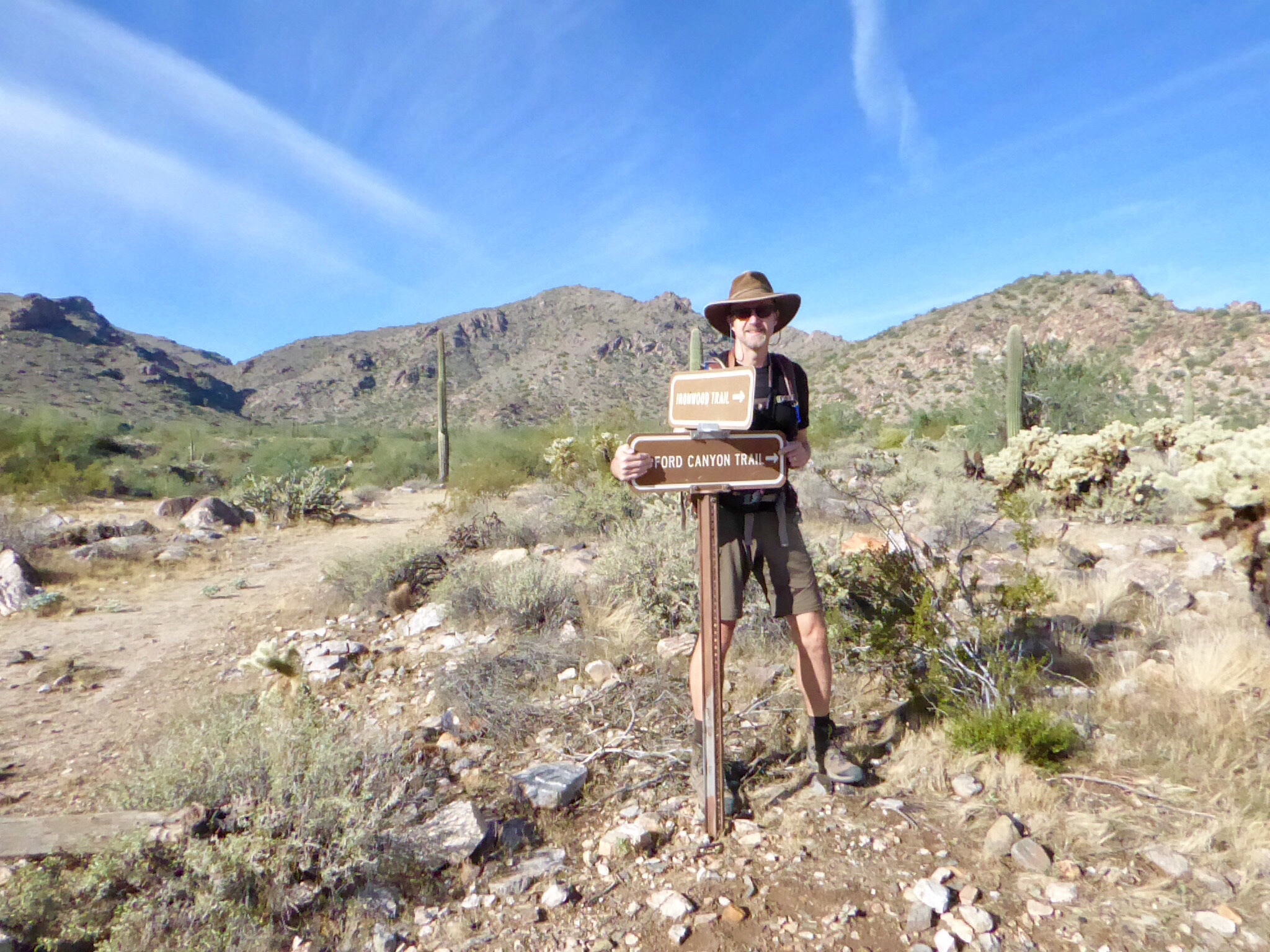 It was a relatively easy hike for about 2.5 miles, then there was a sign warning of hazardous trails, hikers beware! We be’d wary and pressed onward. 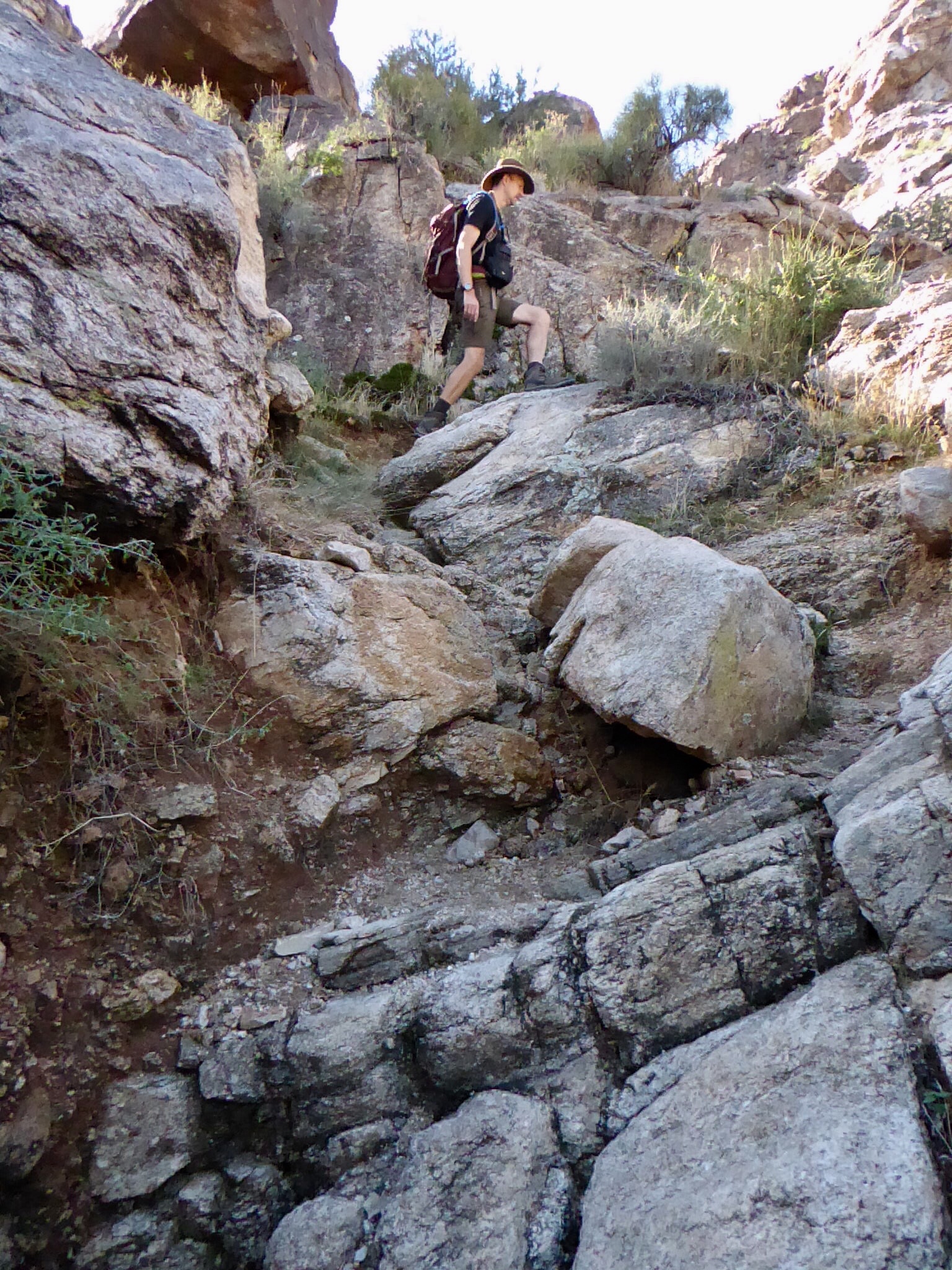 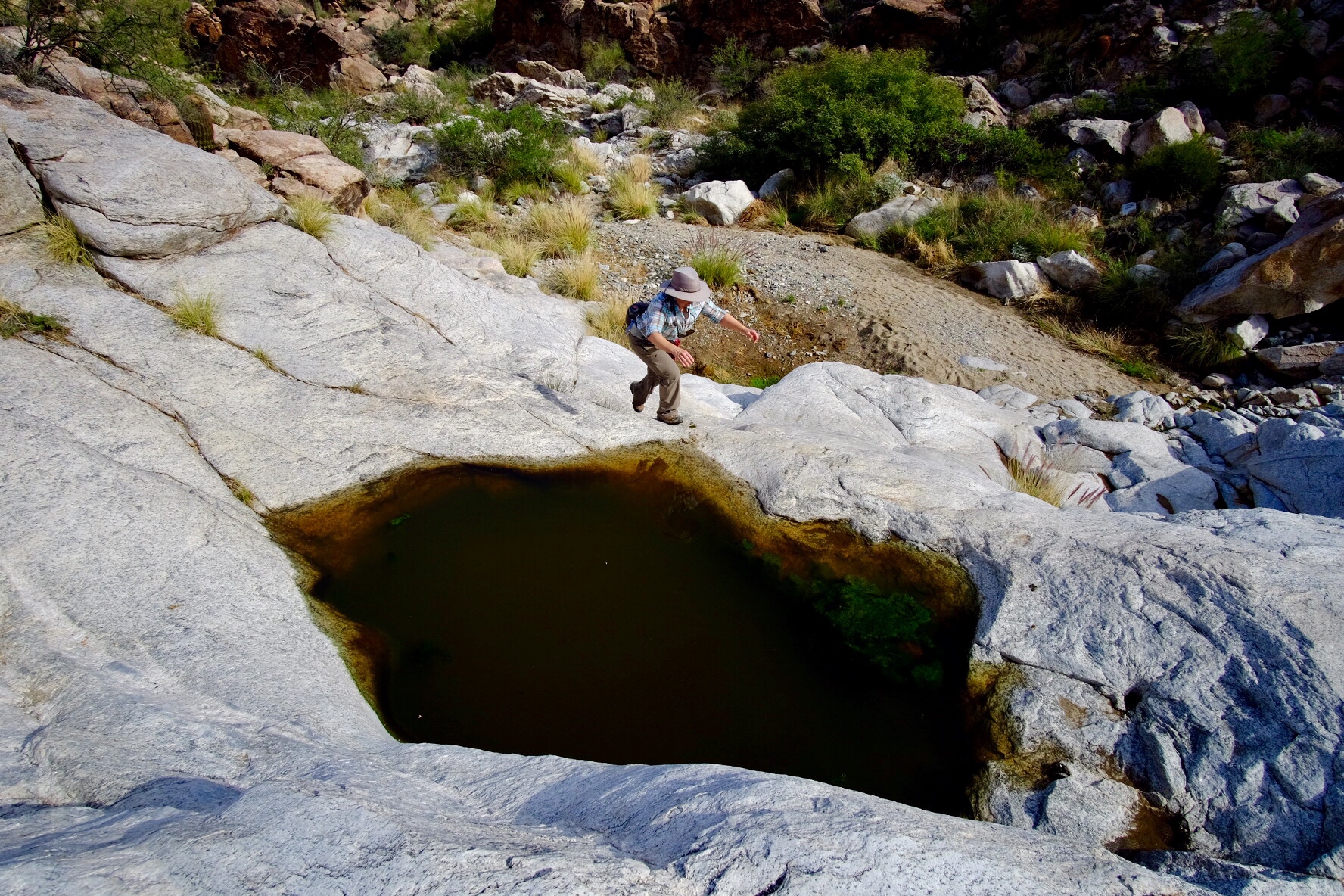 I think I look photoshopped into this picture. My knees know the truth. 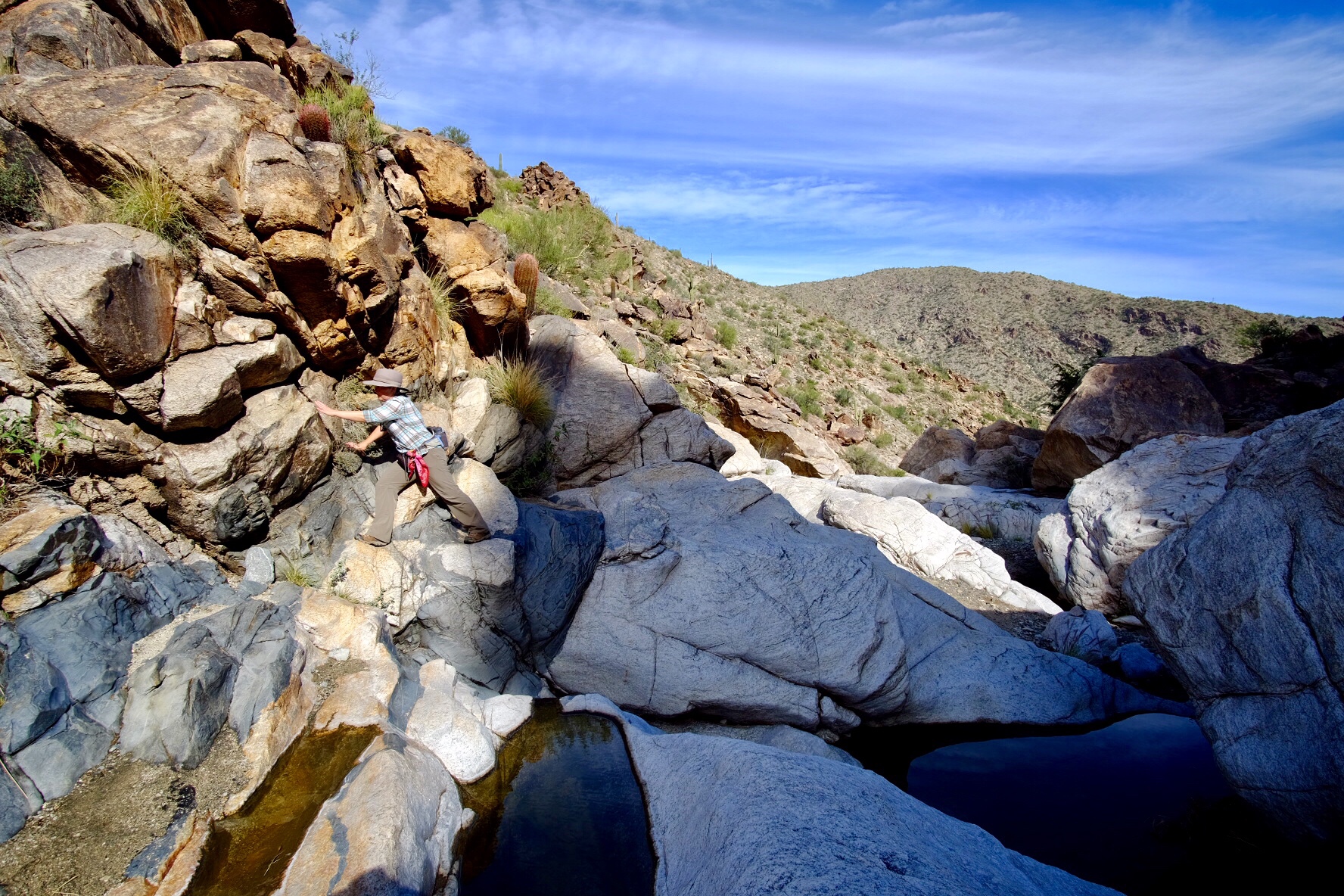 Clinging to the rocks to avoid a drop in the drink. 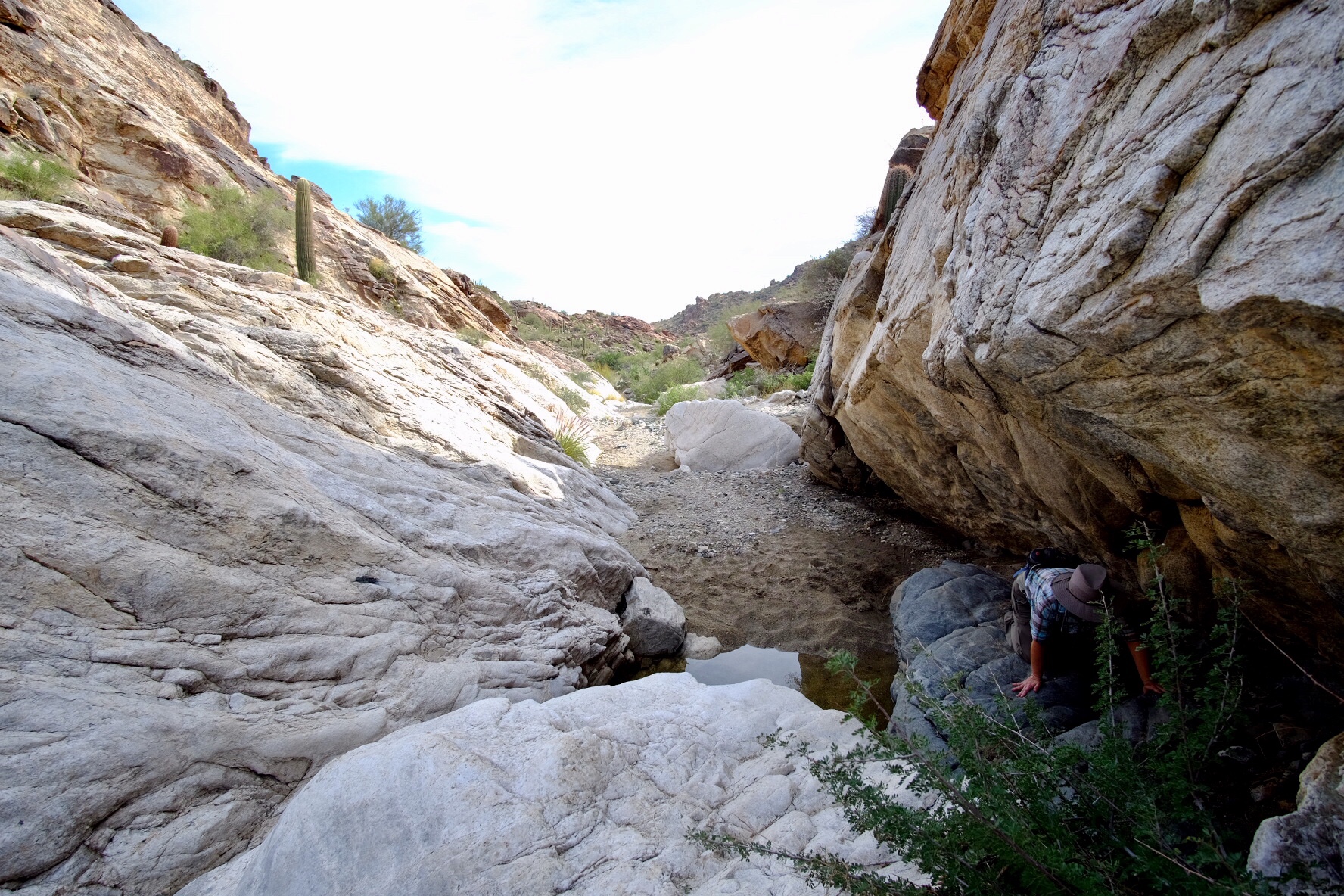 Just kidding! Sort of. I wasn’t purposely looking for them, but I don’t particularly care for crawling where they can live. To my relief, I found none, and none found me. At another point, where no footholds presented themselves up the face of a large rock, I simply threw myself at it and slid up on my belly like a lizard. Observing the ways of the critters pays off! TBG had less trouble being big and all. 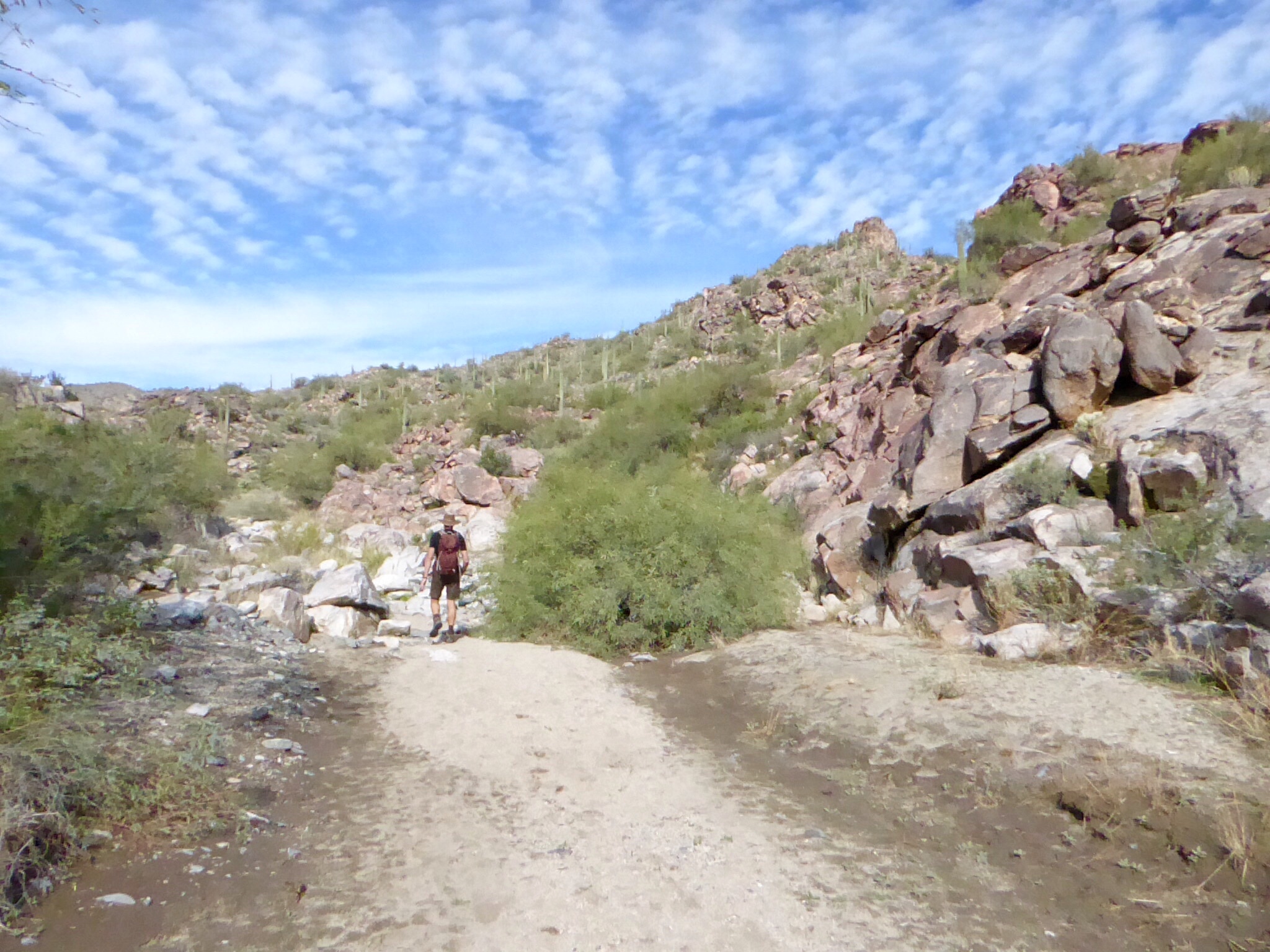 Finally through the hard part!

The trail stayed up along the hillside for a few miles, traversing several long switchbacks. The slightly overcast day and the breeze were blessings. 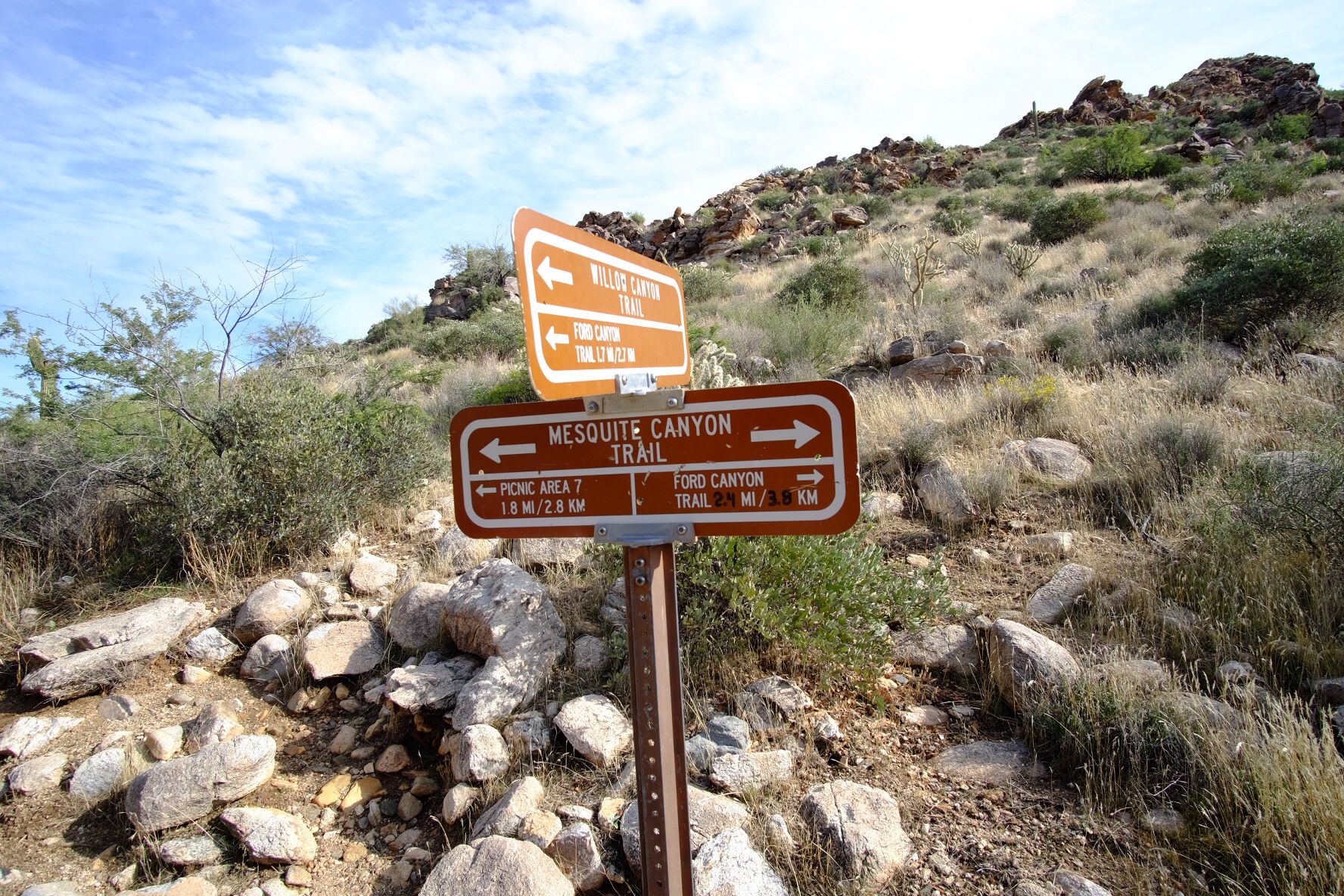 The choice is clear.

At this junction, we started to see more people and horses, our feet were beginning to ache, and we were glad to be making the final descent in our 11.3 mile day. After reaching the picnic area, the final mile or so was mostly level desert walking to home.

We went our separate ways for the first part of the next day. I drove myself down to the VC to see the critters and take a short solo walk. 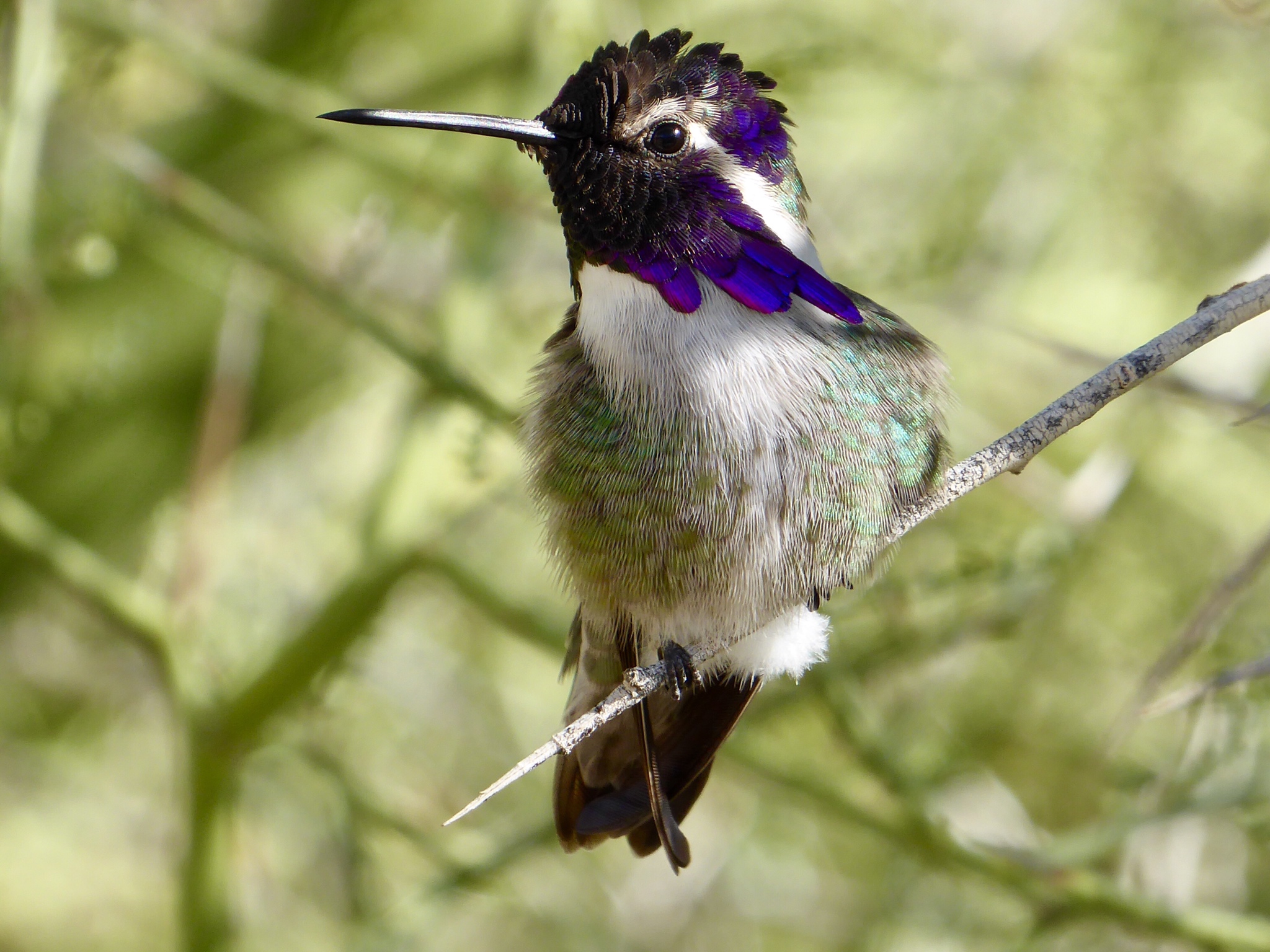 The Costa’s were showing off. 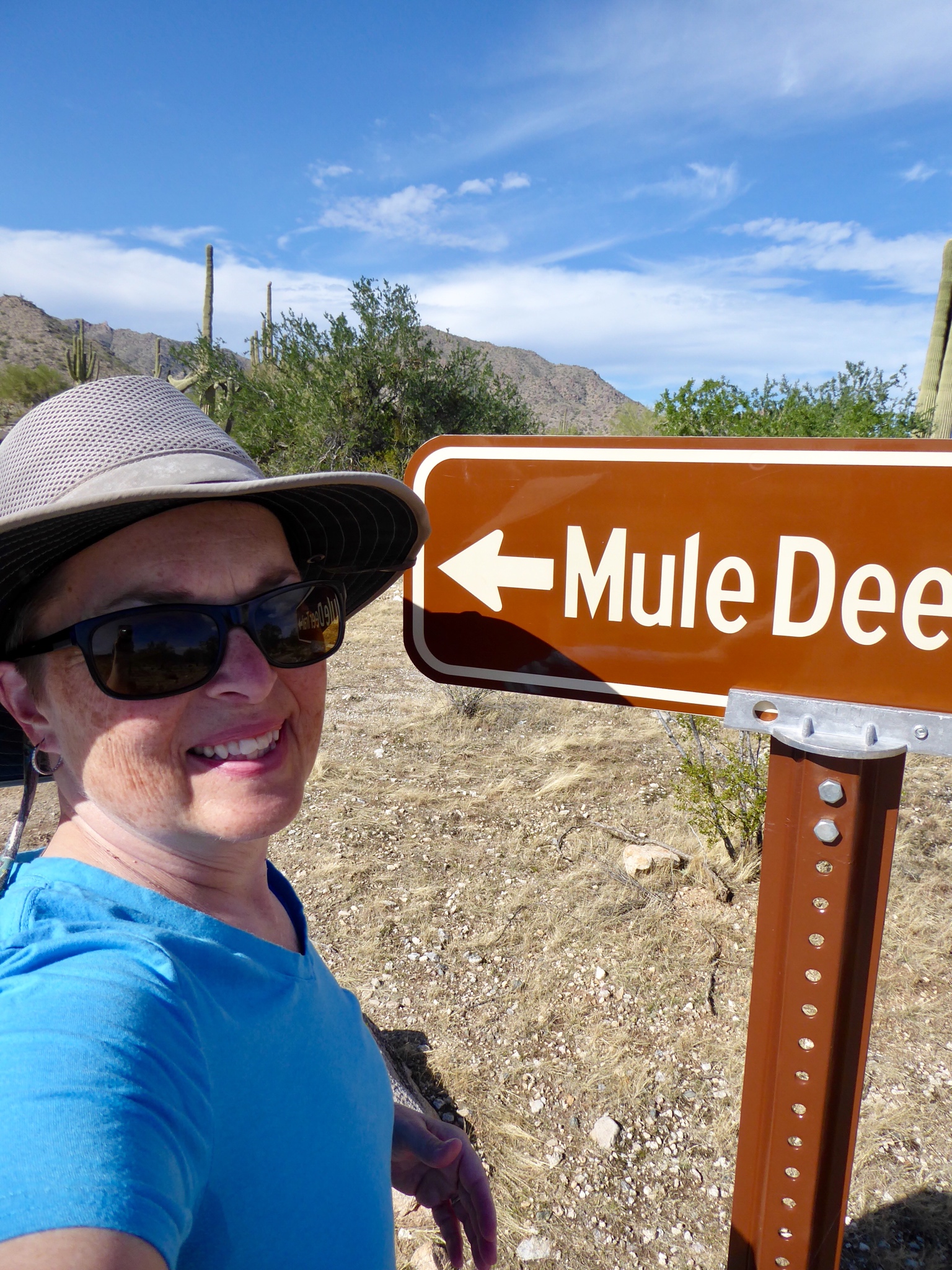 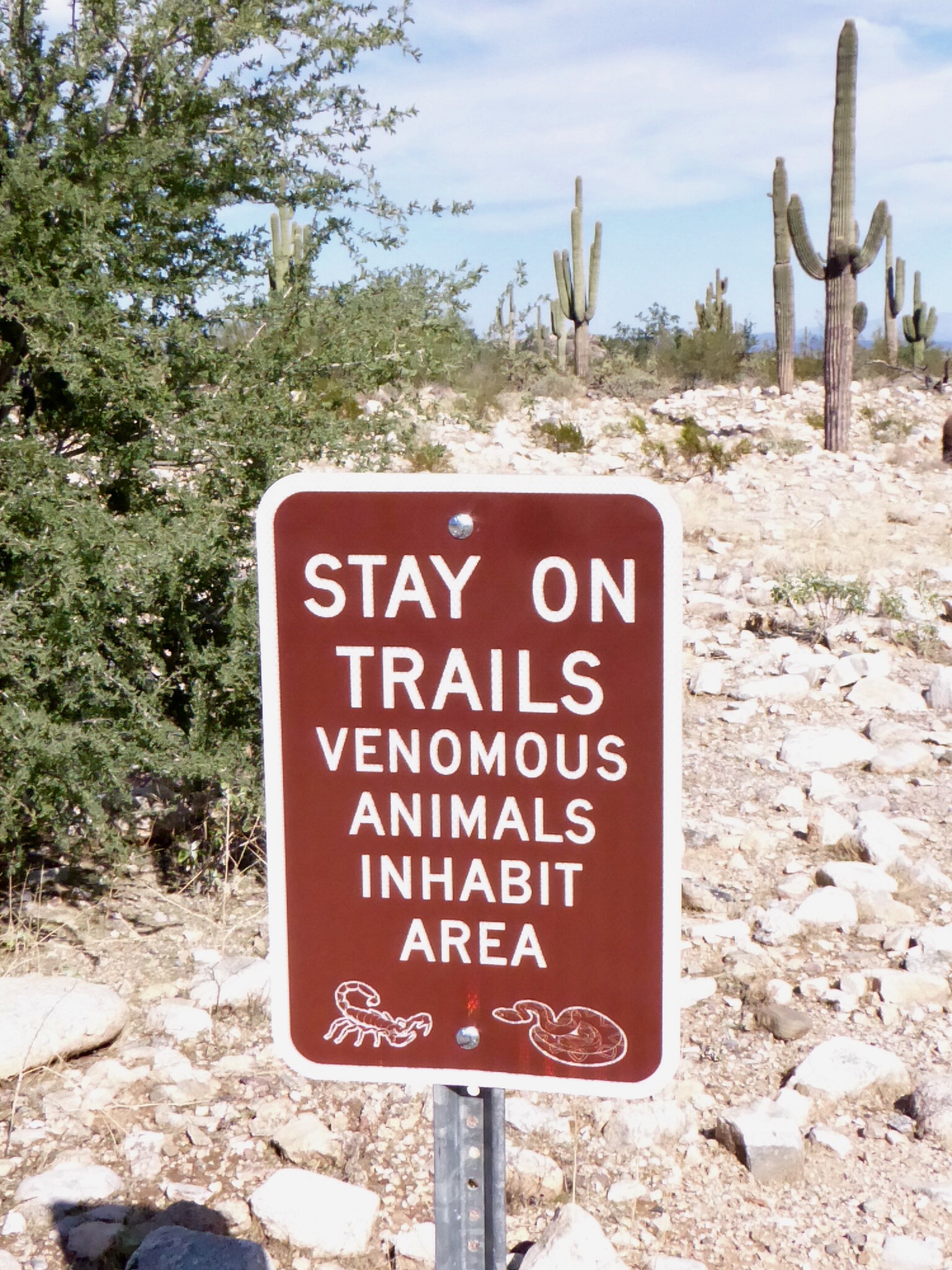 Thank goodness they’re not allowed on the trails!

On my way back home, I stopped off to check out the short wildlife trail that led to the pond. 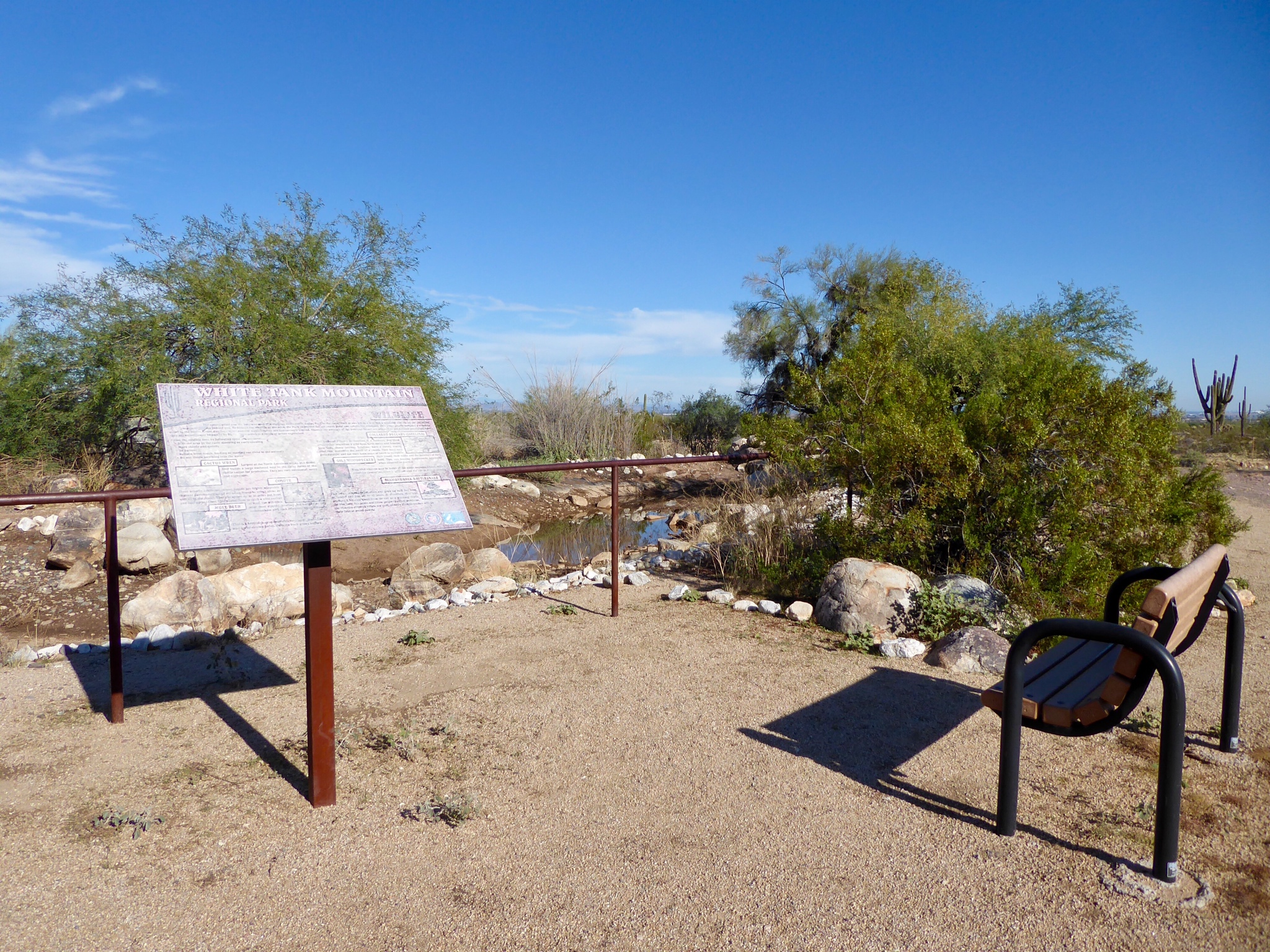 The pond obviously hadn’t been tended to in quite some time, the black plastic retainer visible and dirty water pooled in it. I felt bad for the families whose memorial benches lined the pond.

Back at the rig, TBG’s friend, Jerry, from Mesa had come to visit so the two of them could do some mountain biking. When they got back, they were scolded by the camp host for having a big glass beer bottle outside. There is a very small sign at the entrance regarding glass containers. According to the host, no one sees it. According to me, that means move the sign or make it bigger. Also, folks might like to have a large glass bottle to defend themselves against the coyote that stalks the dumpster. Just my thoughts which I kept to myself.

Not only the Costa’s and Anna’s hummingbirds visited my feeder, but the Gila woodpeckers were a constant guest. I like to see them, but I worry they will break the feeder. A pretty little Verdin (thanks, Laurel, for the I.D.!) barely bigger than the hummingbirds, showed up a few times for a sip, too.

We did take one more hike during our stay, a 5.7 mile trail combo. None of our photos came out very share-worthy, except this one. 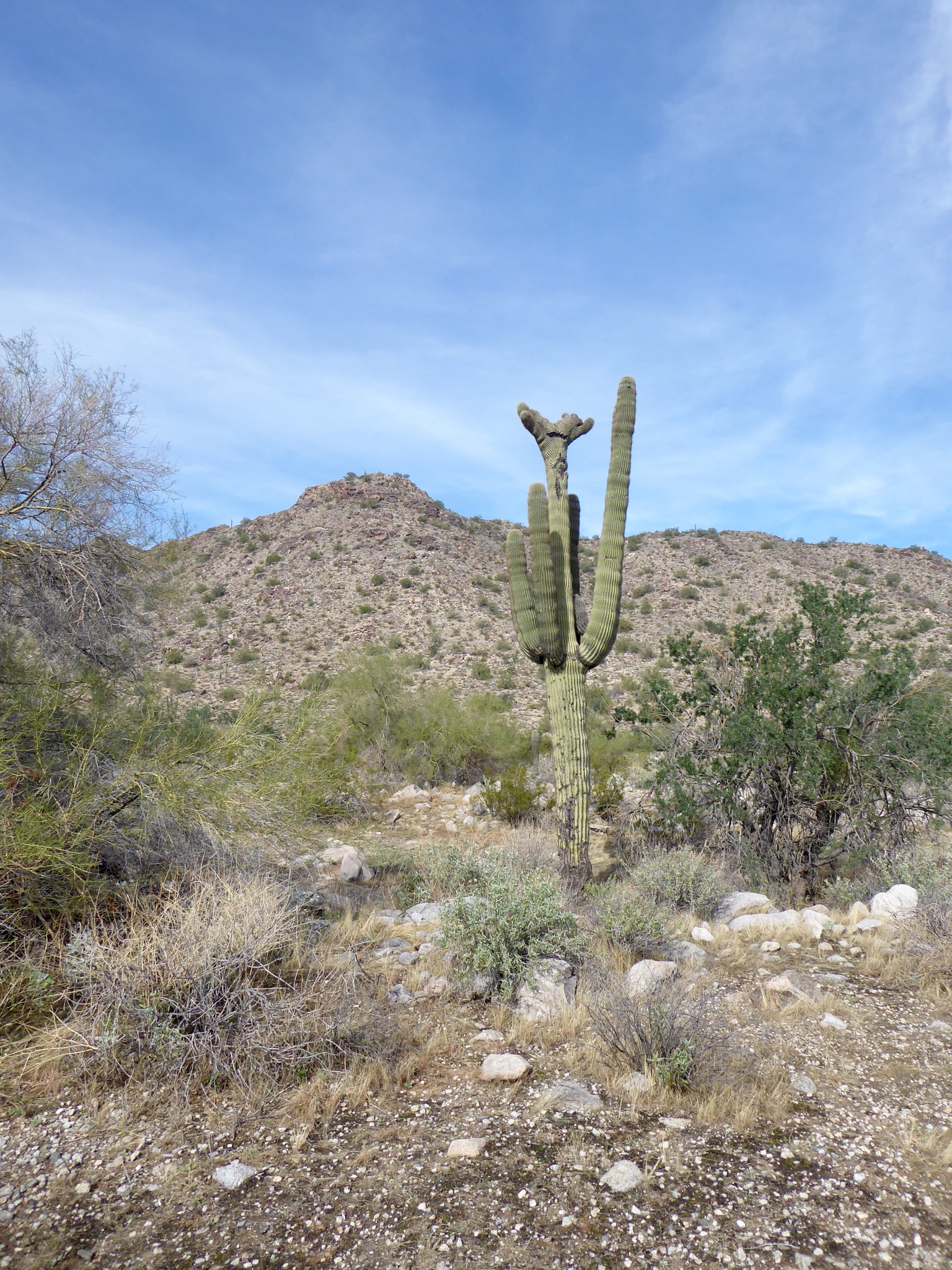 I declare the (rare?) Crested Saguaro will be our official Christmas tree.

But let’s not get ahead of ourselves, we have a month to go. So with that, I wish you all a very 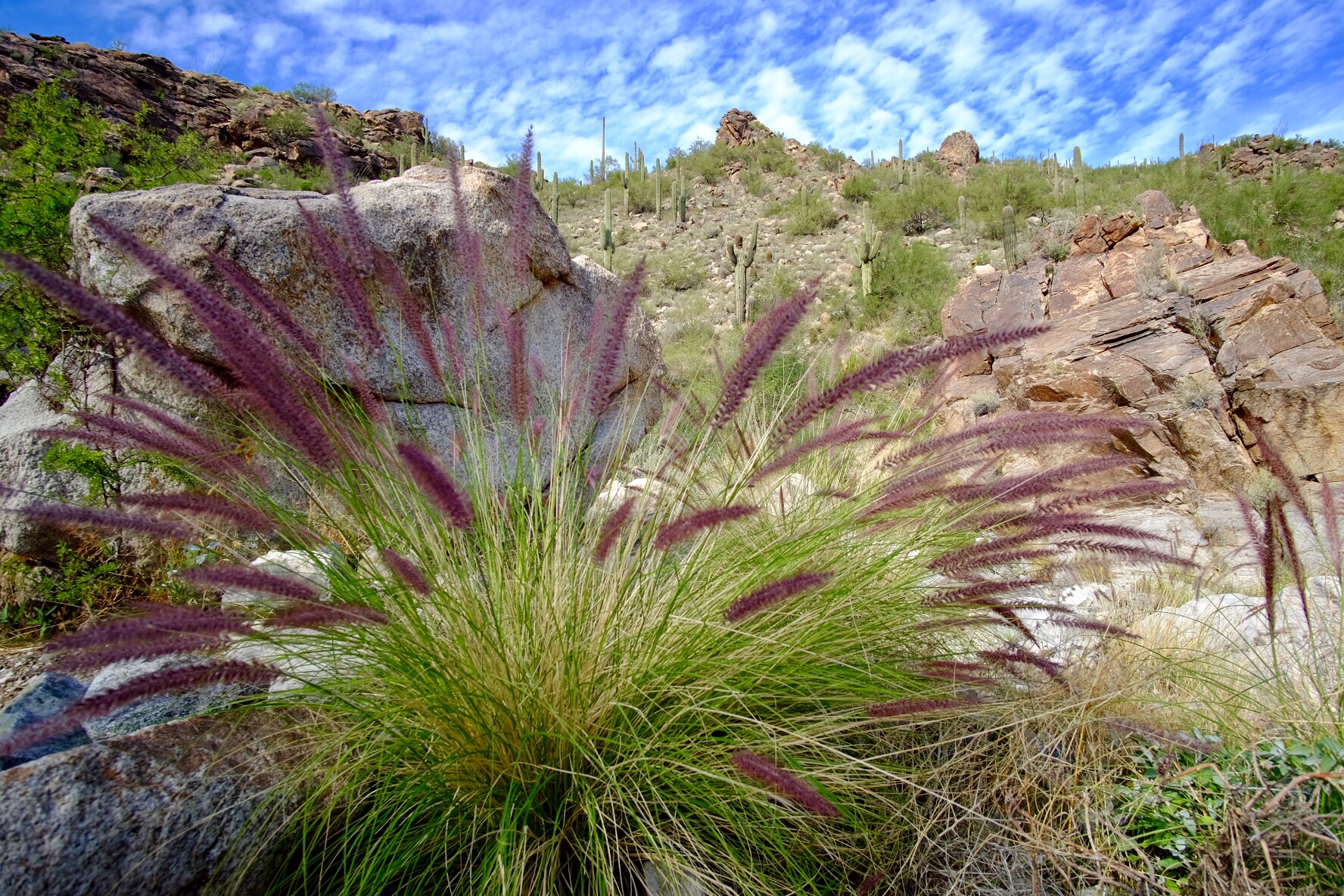