Why does it seem so long ago that I posted? I don’t know other than these stays in the Maricopa regional parks are sort of blending together, most likely because moving between them makes for short travel days, and the weather and geography hasn’t changed all that much in a while. That’s not a bad thing given that the weather has been generally pretty good and the geography offers plenty to do. We also began this stay with a fun holiday celebration, so I guess my feelings are unreliable and we’ll have to go to the notes and photos to tell the real story.

When you become full-time RVers, you have to sign an agreement that you will spend every winter in either Arizona or Florida. OK, not really, but you may as well since that’s what we all do and because we all do, we are able to gather with our traveling friends. For us that meant some new-old friends, Steve and Mona Liza of Lowes Travels and some new-new friends, Al & Ingrid of LiveLaughRV. 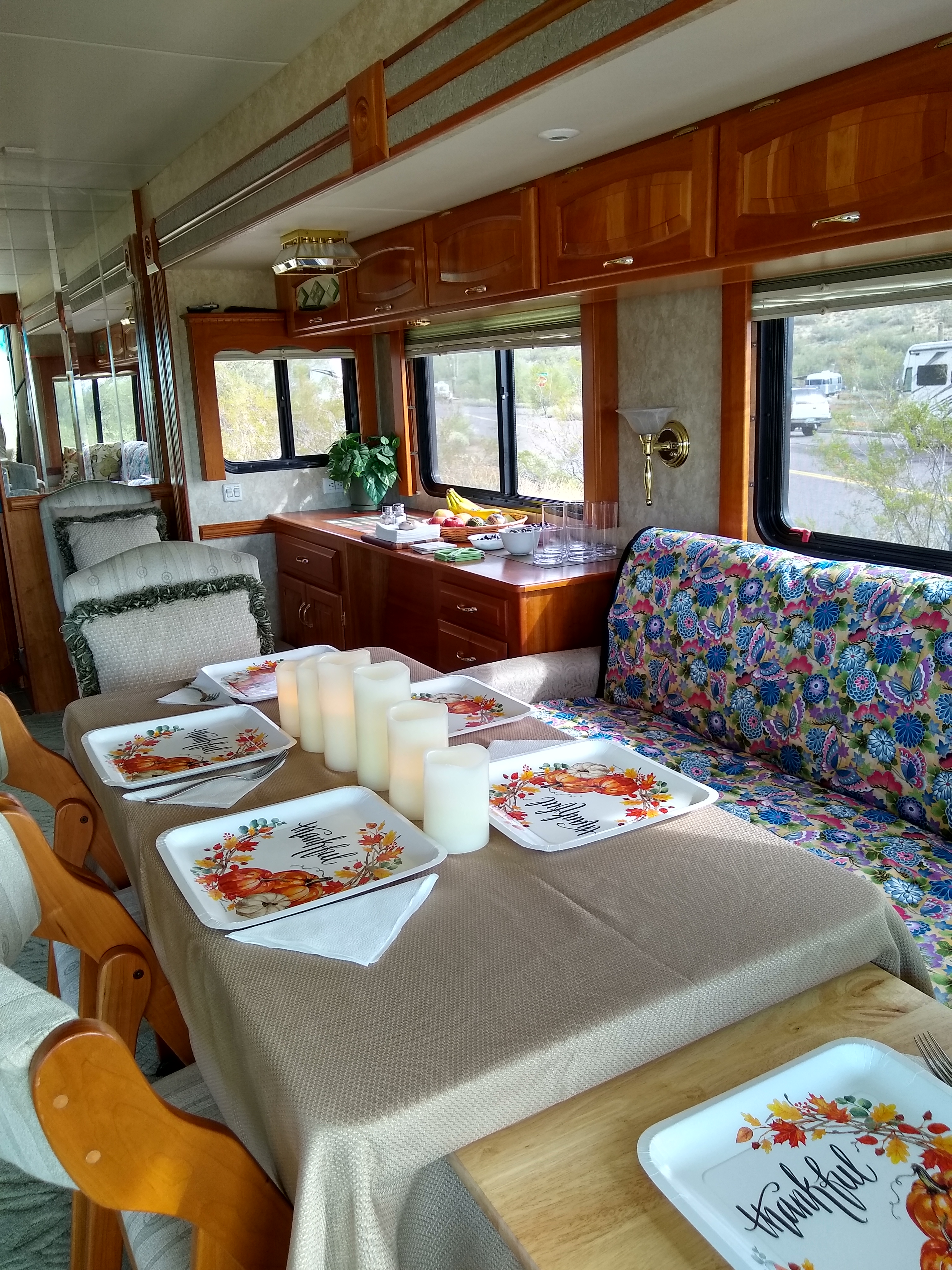 We first “met” Al & Ingrid online where we coincidentally discovered that they spend their summers in Ashland, WI — the very city that is closest to the site of our upcoming summer NPS gig! Ingrid was beyond kind when she went over there and sent us pictures of the place and, specifically, where our RV would be parked. It helped us make our decision to pursue that job, and both she and Al have been an extensive and reassuring  resource for all things Wisconsin. They spend most of the rest of the year in the Phoenix area and have also been a wealth of information on what to see and do here. How cool is that?

Unfortunately, they don’t get along with the Lowes at all!

We had a wonderful gathering over delicious food and drink from each of us. Thank you, friends, for making our holiday special!

Another big storm was moving in that afternoon, so we couldn’t celebrate too long into the evening. Everyone made it home safely and just in time, and TBG and I pulled in our big slide to stave off potential wind damage and to keep things quiet(er) overnight. The morning was still stormy, but things cleared up enough later, and we took the two-mile walk to the Visitor Center. 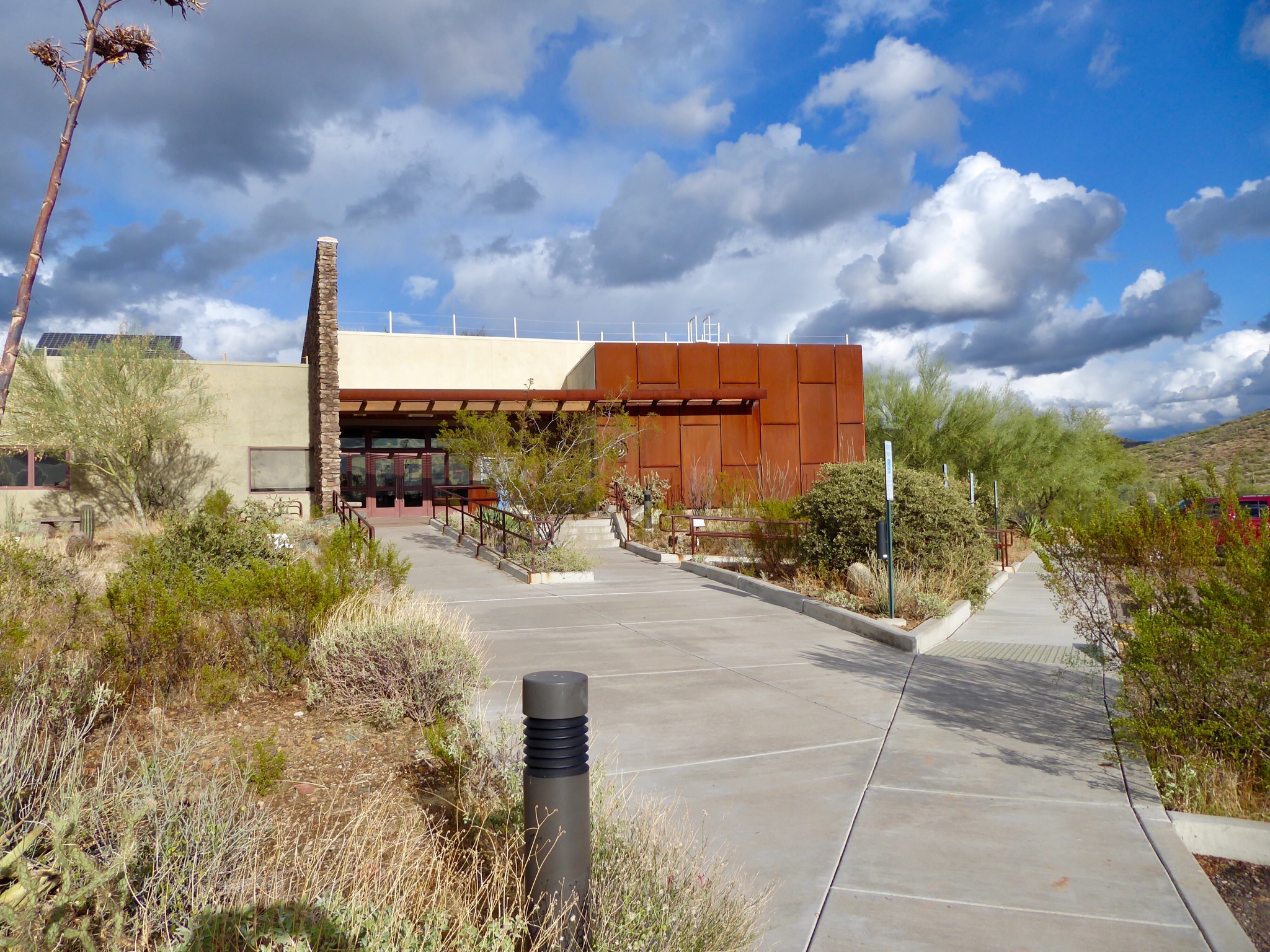 As with all the regional parks, the VC houses a variety of desert critters, and along with the snakes, this one showcased several spiders. I didn’t photograph any of those, but I will post some photos further down of the snakes being fed later that week. Consider yourselves WARNED

Our first “real” hike began with the walk to the VC (all the hikes here did if we wanted to walk from our campsite) then we set out on the Slate Trail, hoping to locate a famous cactus. TBG was feeling a bit floopy, though, and decided to turn back at the trailhead. I soldiered on alone. 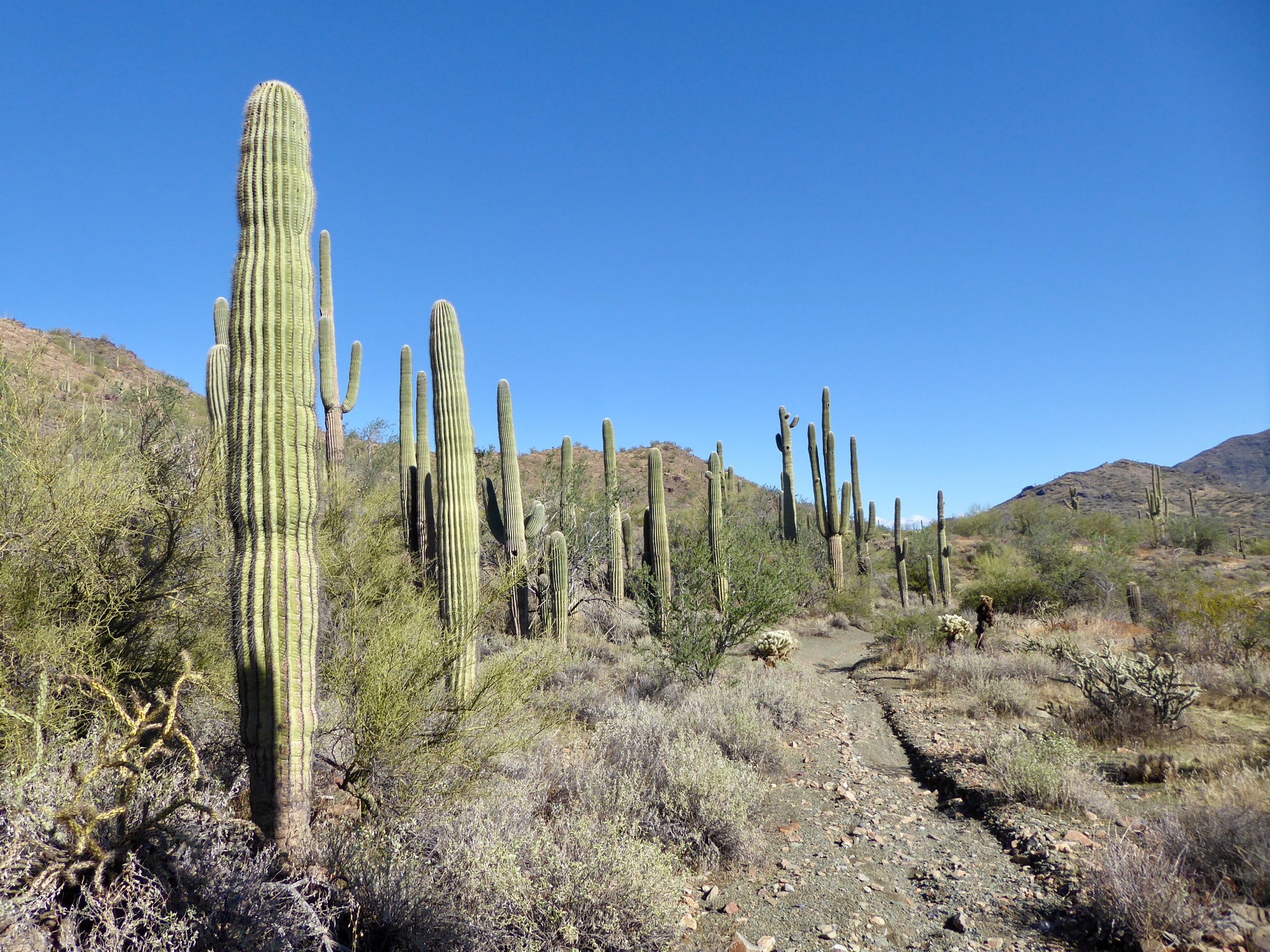 Alone in the desert with non-famous cacti.

I walked along, with my head on a swivel, but didn’t see it anywhere. 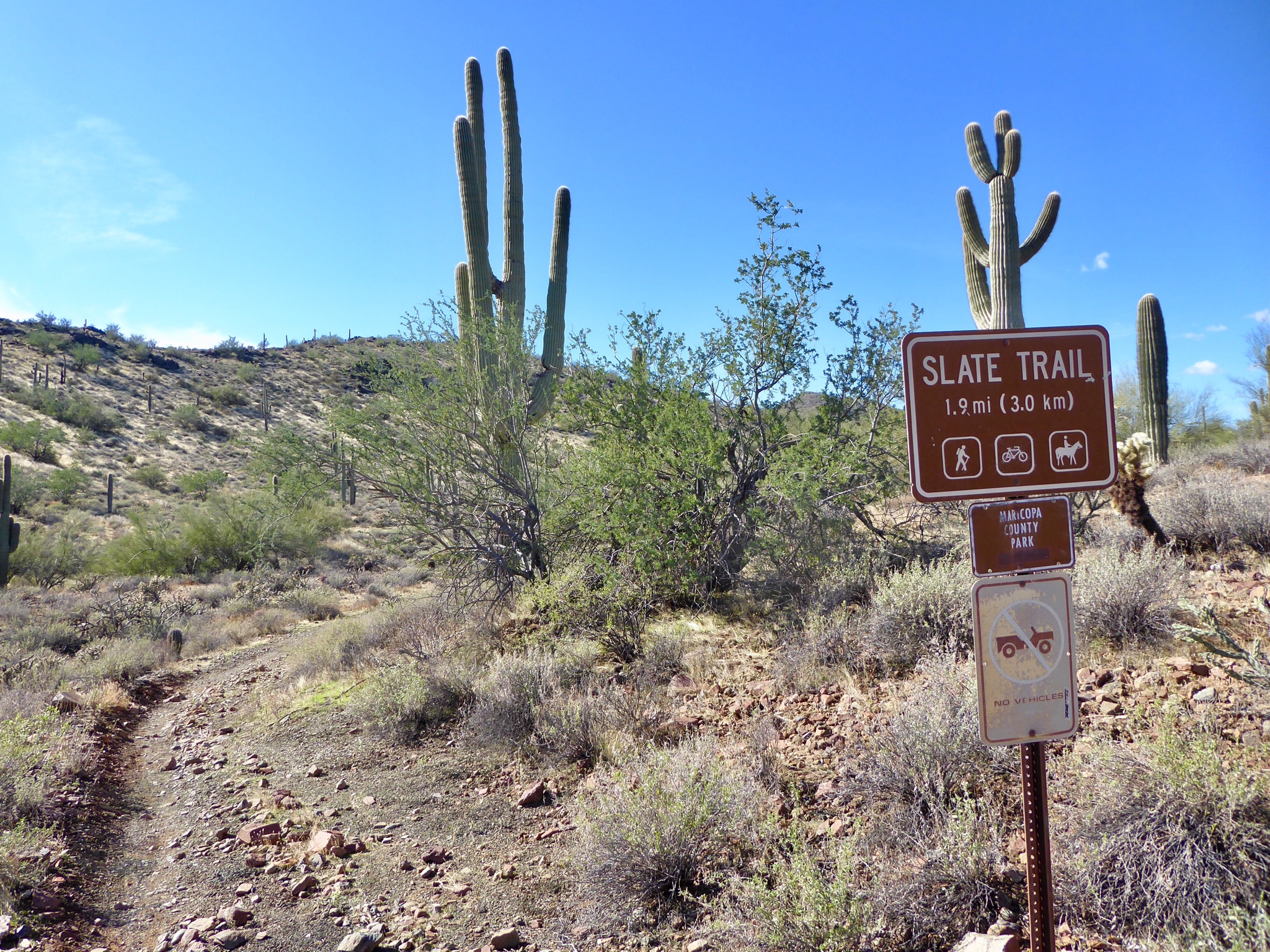 I reached the park boundary without locating it. How could this be? I wondered. All indications were that it was along this trail, and there were tons of pictures of it online. I had thought it would be obvious, but apparently not. You’re not really supposed to continue on past this sign, and I didn’t want to go further anyhow, so I headed back feeling sad that I would have to tell TBG that I couldn’t find it.

There weren’t a lot of other people out, but each and every one I passed, I queried, “Do you know where the Michelin Man cactus is?” No one I encountered had ever even heard of it, much less seen it. I was nearing the last trail junction, and I saw another couple approaching. Before I was close enough to interrogate them, I serendipitously looked over my left shoulder. 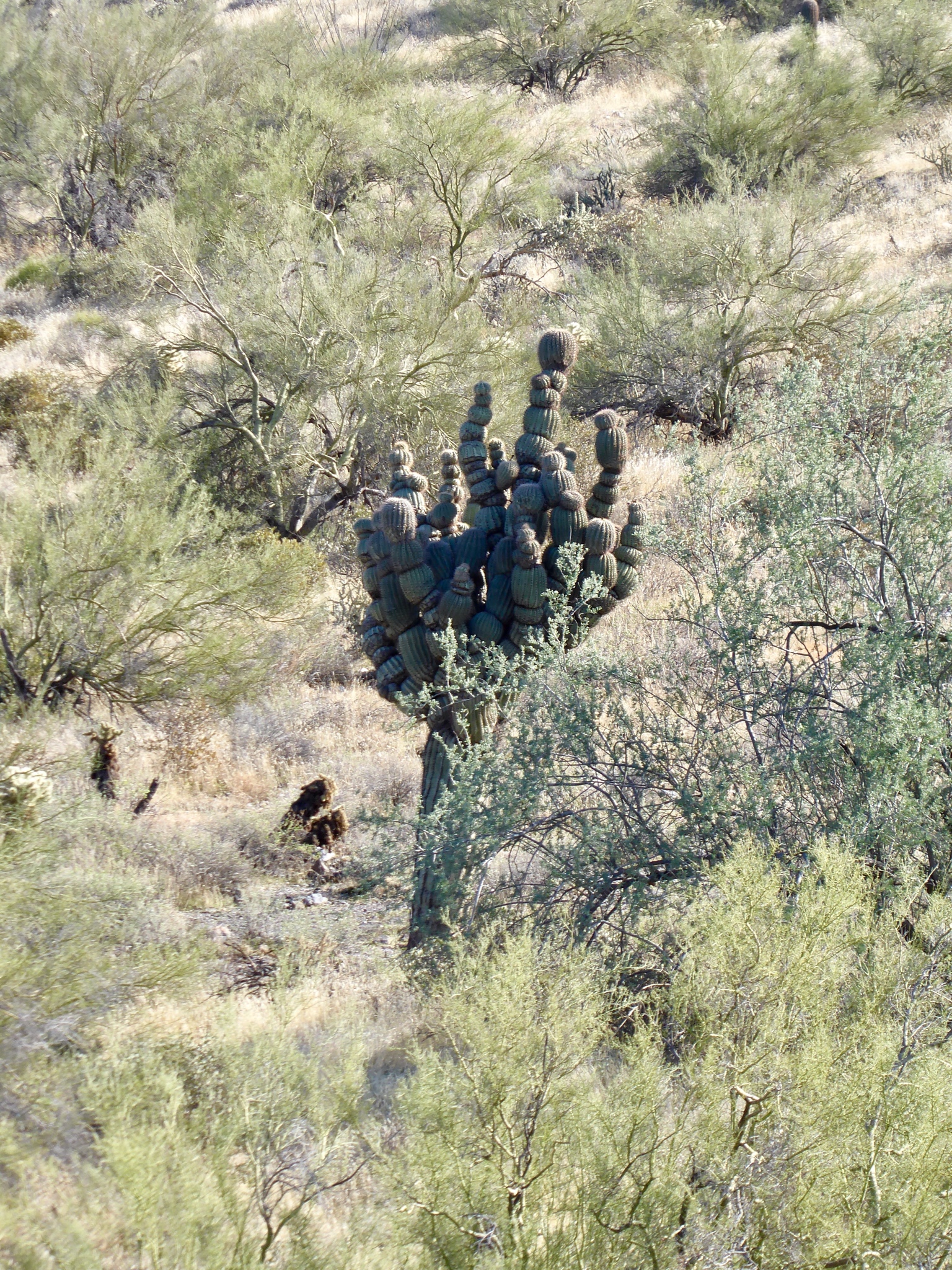 And there it was!

It was not as big as I’d expected, and it was further off the trail than I thought it would be, but there it was! 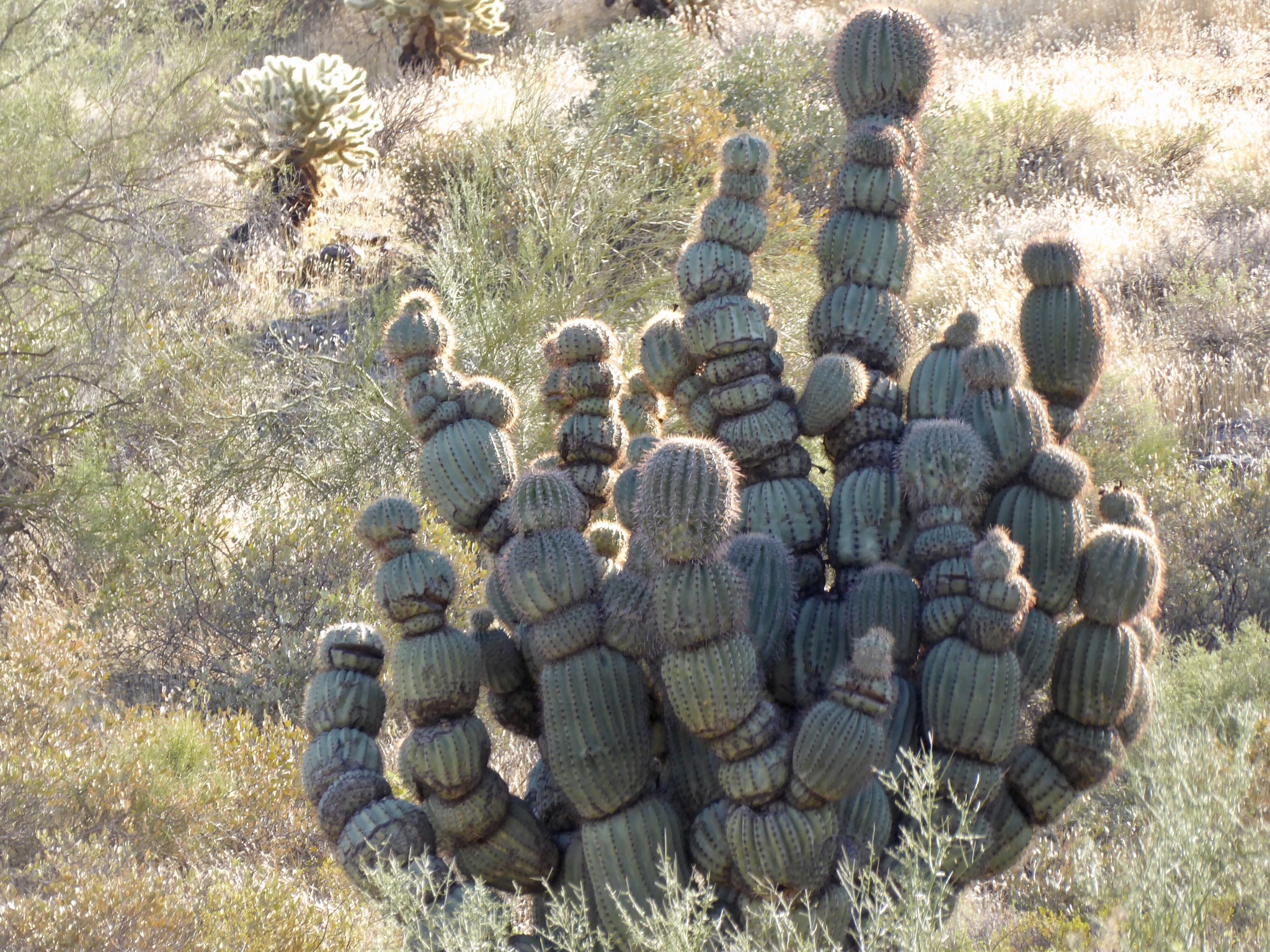 It’s known as a “segmented” saguaro. 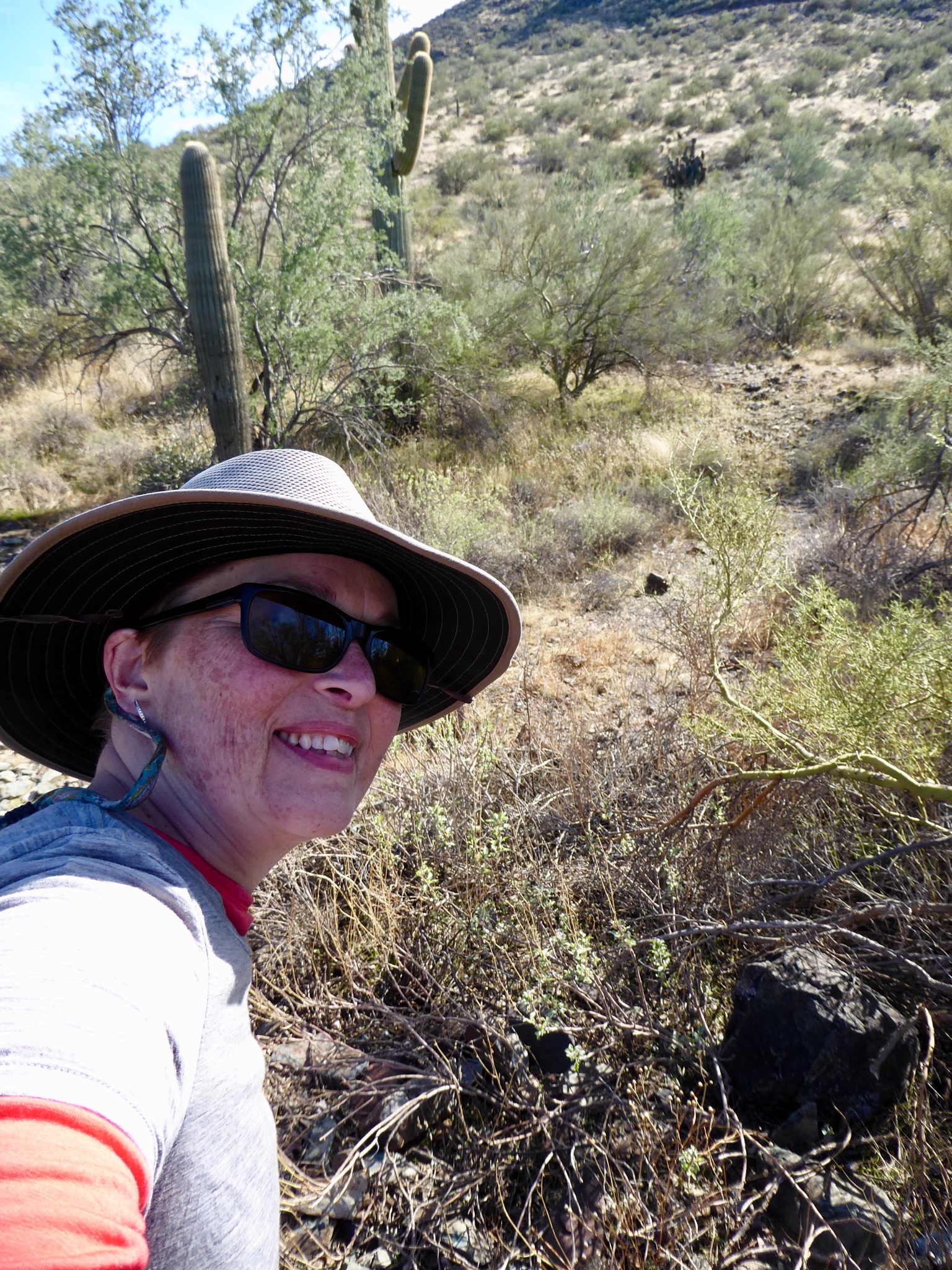 Pics or it didn’t happen!

Lest you think I just stole pictures off the web, I took a selfie to prove I was there and show how big it’s not and how far off the trail it is. I didn’t feel so dumb having missed it the first time, although I went almost three more miles than I needed to, not that I regret that, mind you. If you ever find yourself here, Michelin Man is located on the south side of the Slate Trail about midway between the Jasper and Quartz trails. Can’t miss it!

The next day didn’t bring more than a walk to the VC and back, but we did see something fun along the way. 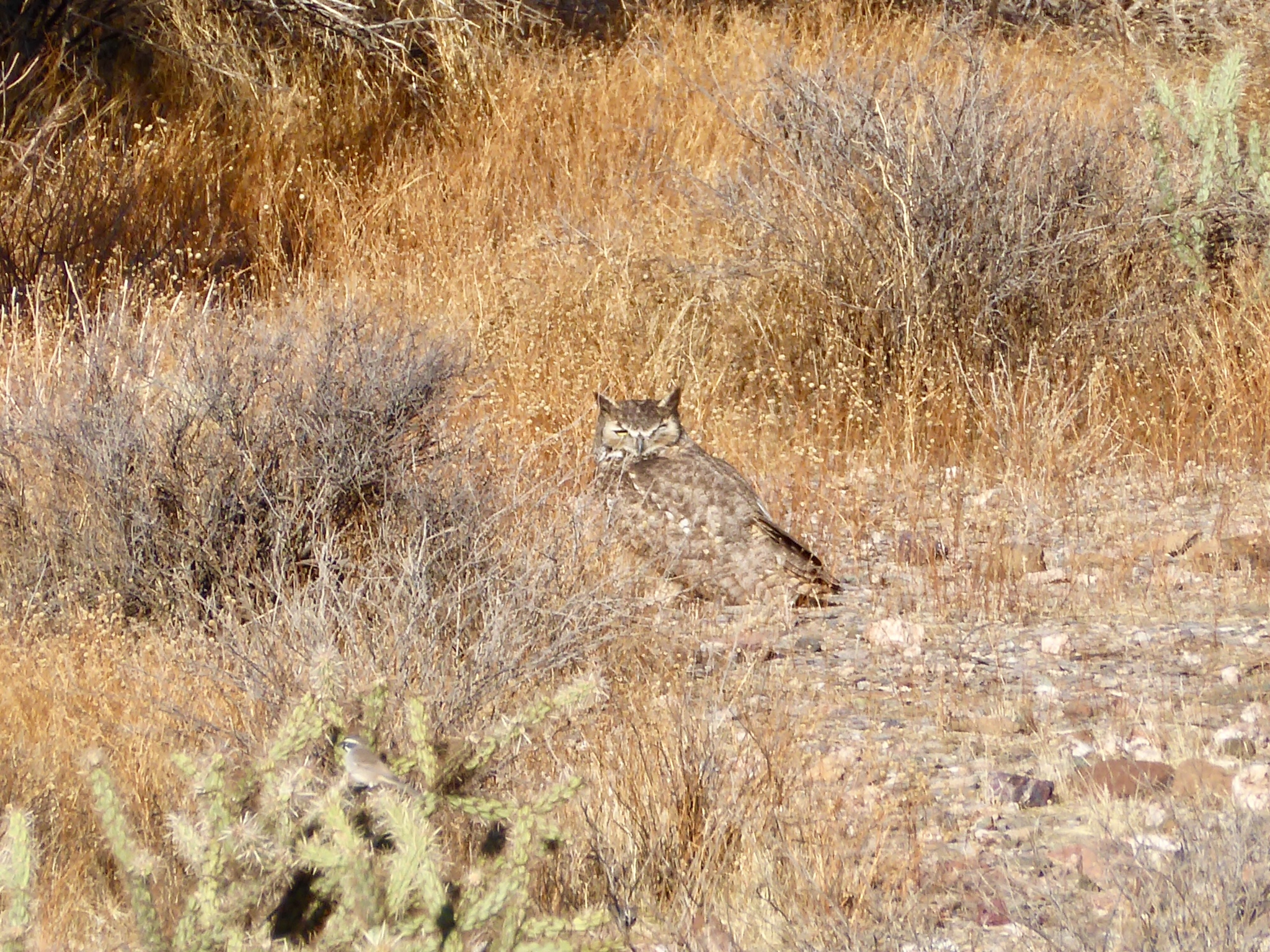 Our longest hike of this stay was in the park along the Go John Trail for an 8.6-mile loop. 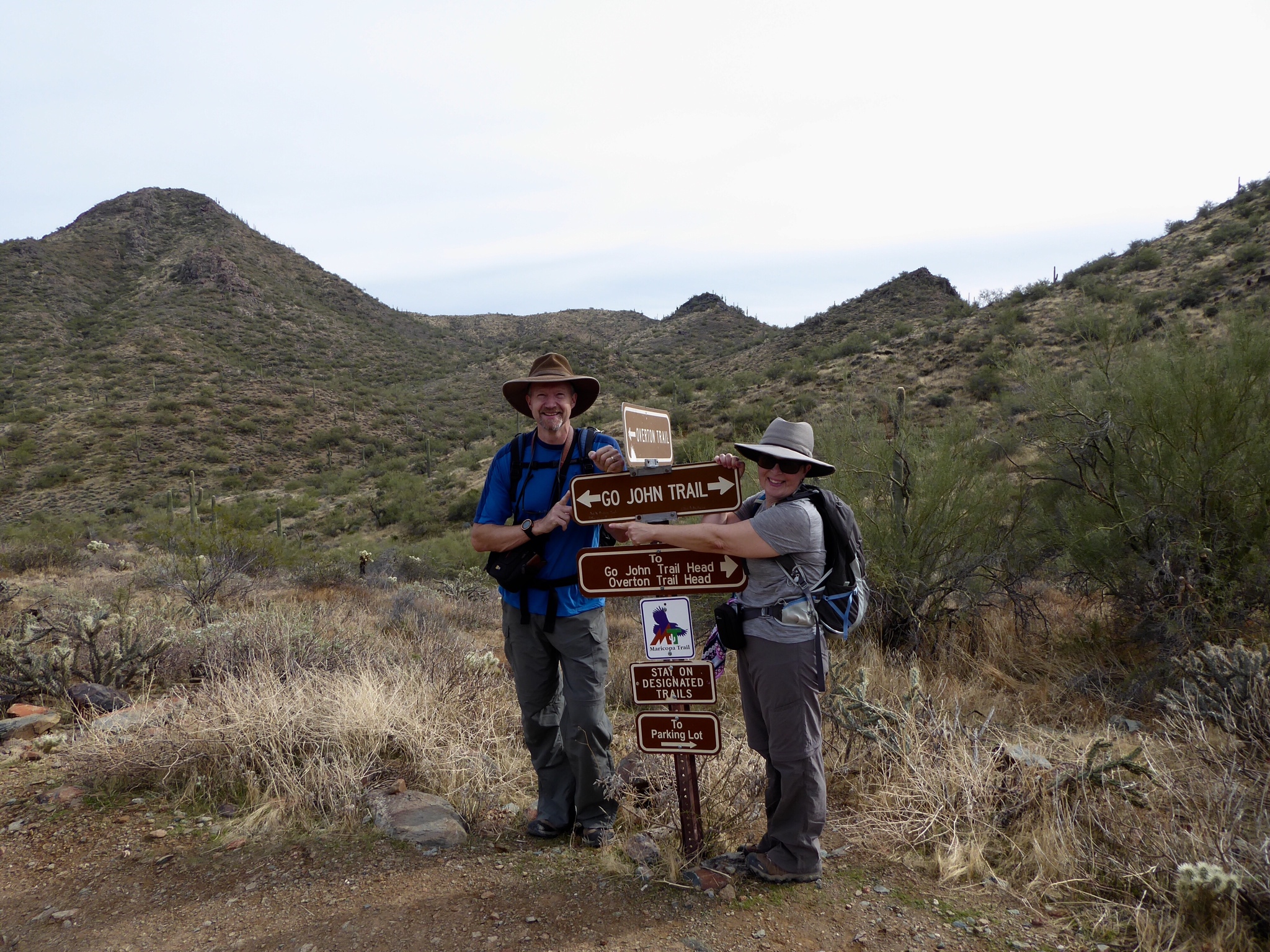 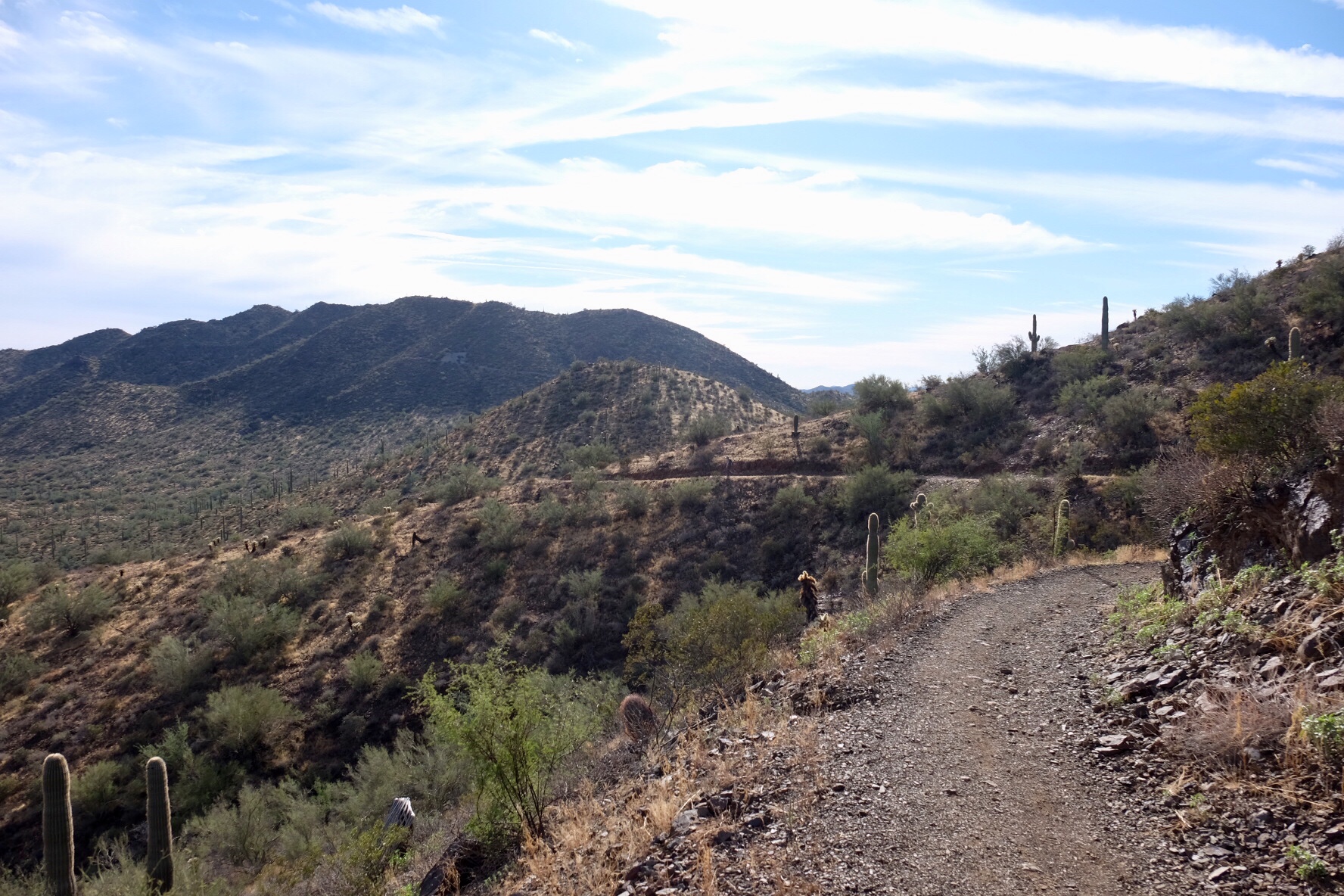 Can you see me?

While TBG went for a solo bike ride the next day, I stayed in and did some route-planning. It would have been nice to have the windows open and enjoy the breeze, but the sound of a nearby construction vehicle’s back-up beeper ruined the chances of that. The proximity of these parks to the Phoenix metro area is simultaneously their biggest draw and drawback. The proximity of this park to its sister, Spur Cross Conservation Area, is one of its other draws, and we headed there next with a high recommendation from Ingrid. 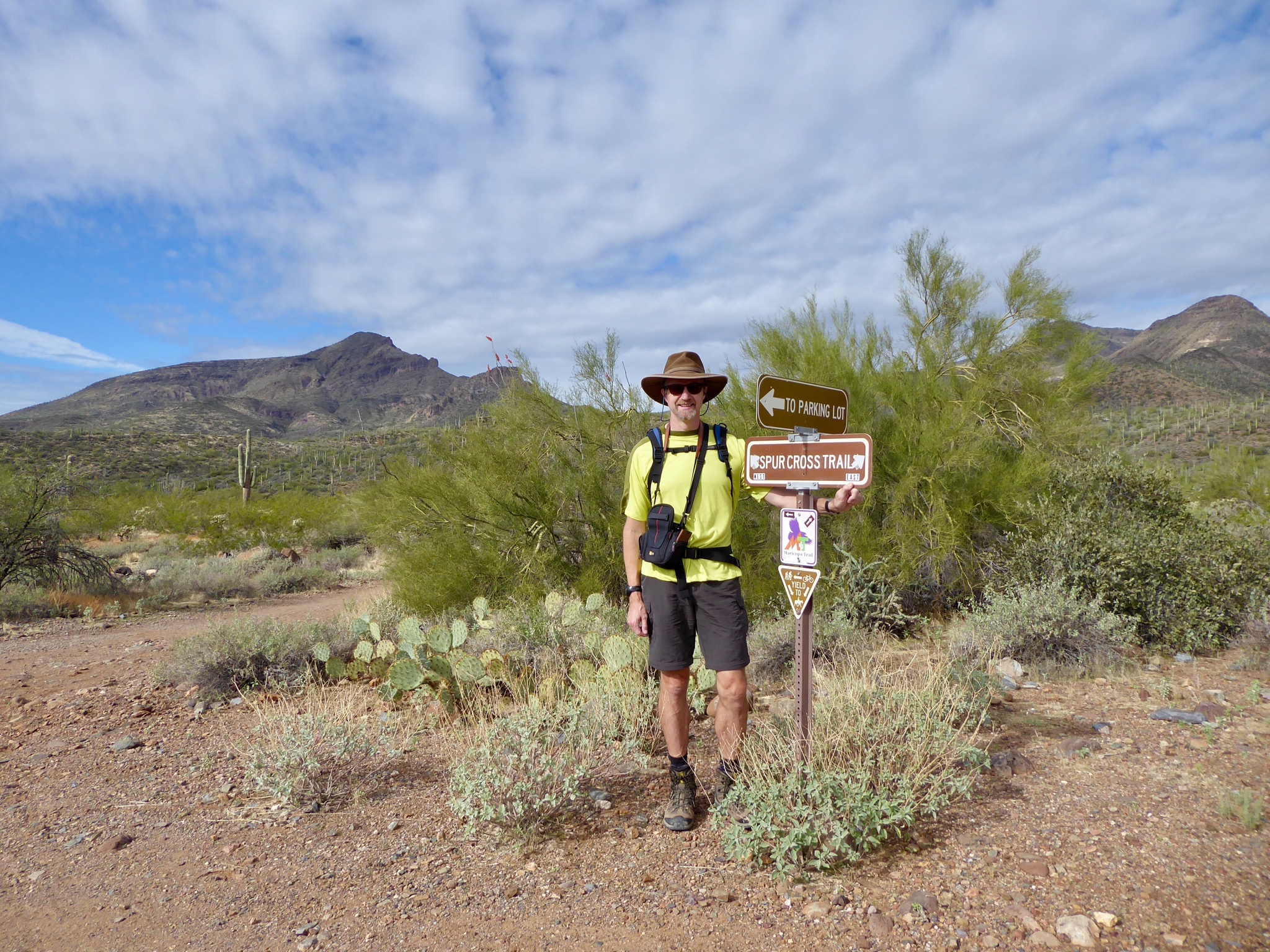 Spur Cross is considered an extension of Cave Creek.  The camp hosts work at both places, and our camping fee covered the entrance there as well. The hosts sent us on the Spur Cross-Elephant Mountain-Tortuga Loop. There had been a little rain the night before which made the air soft and fresh. 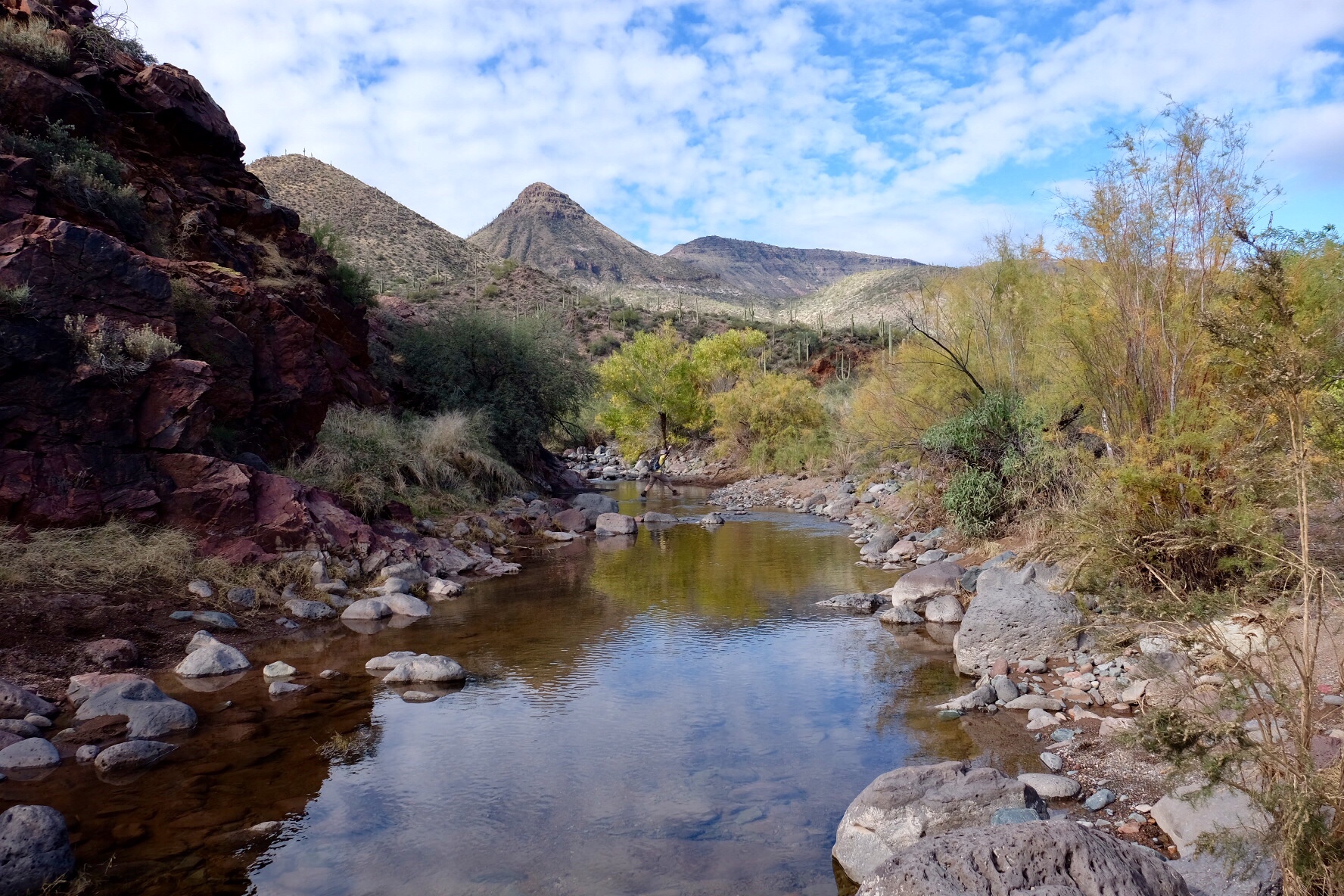 Can you see me?

In the first few miles, there were four water crossings that required some skillful rock-hopping. Soon enough we were climbing and climbing. The trail was almost impossible to distinguish in a few places, and we were glad to have GPS working to keep us on track. 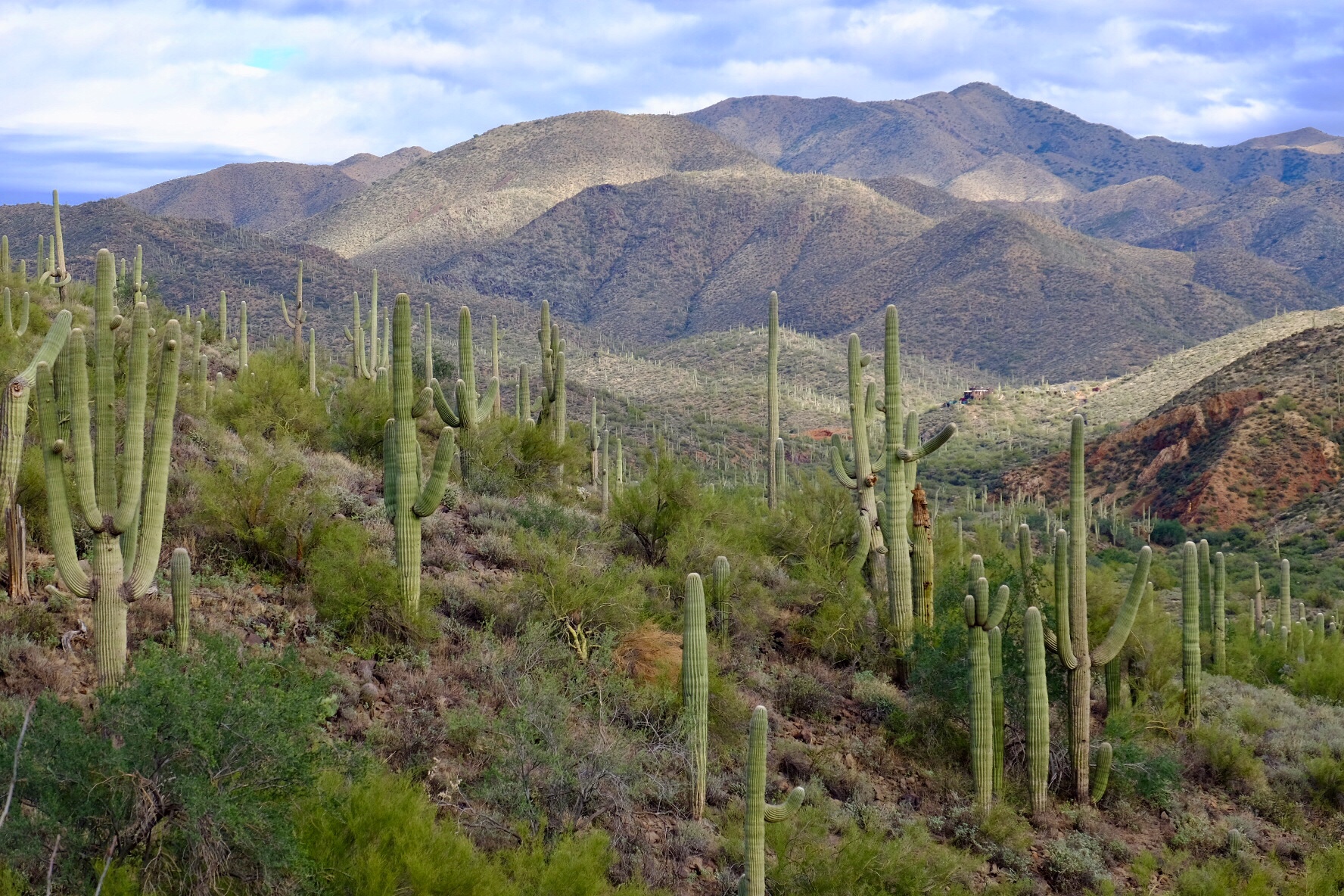 Beautiful place to get lost. 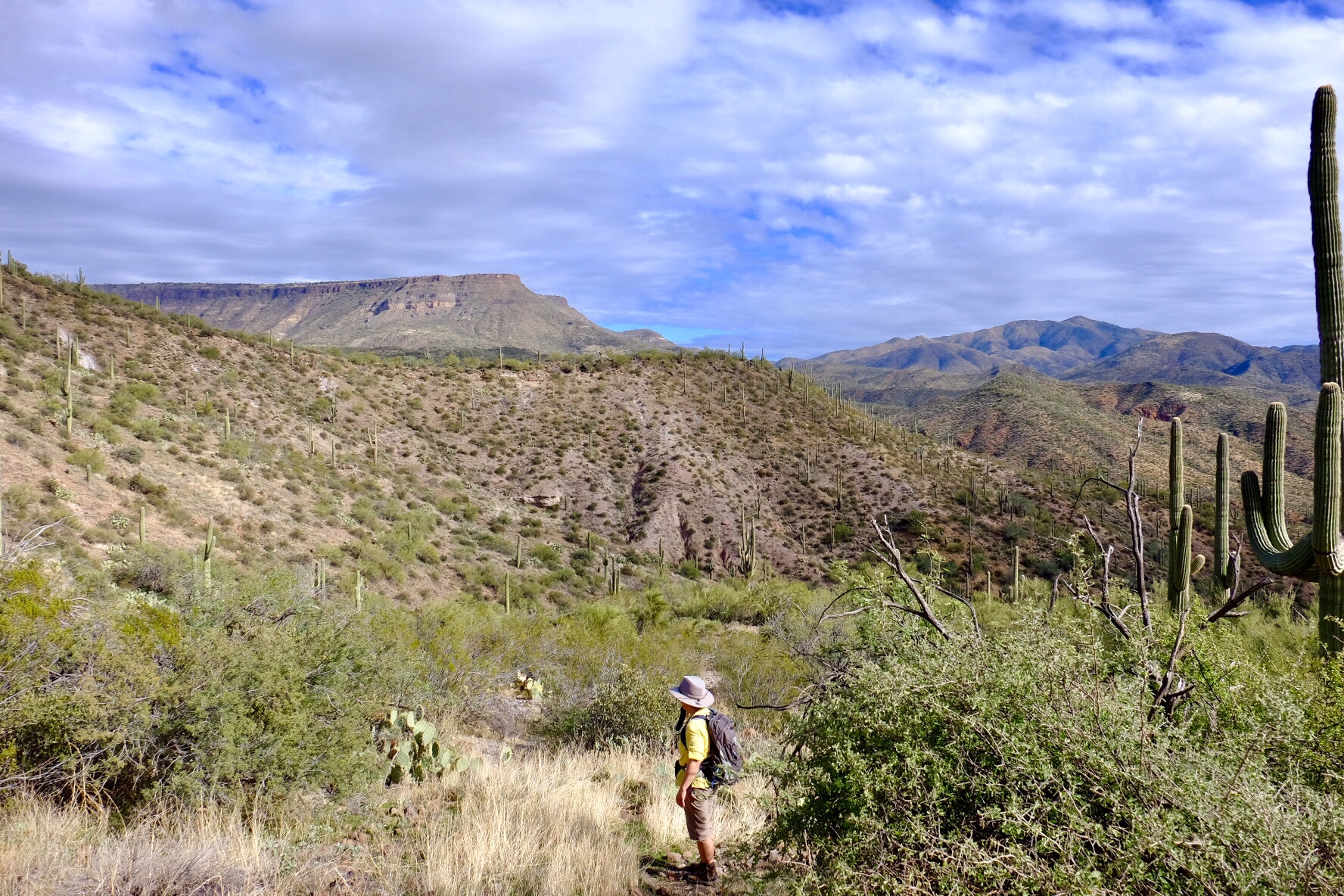 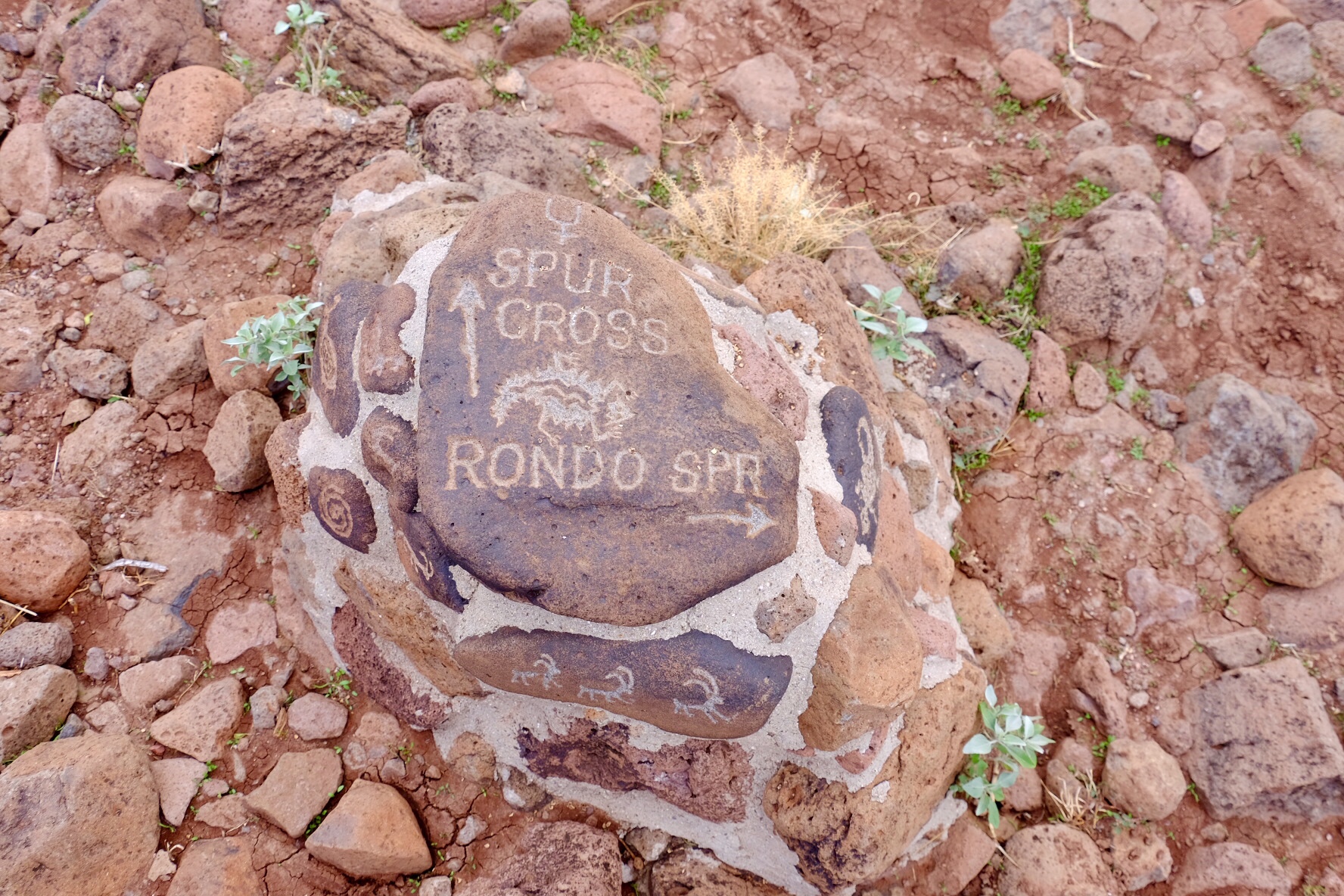 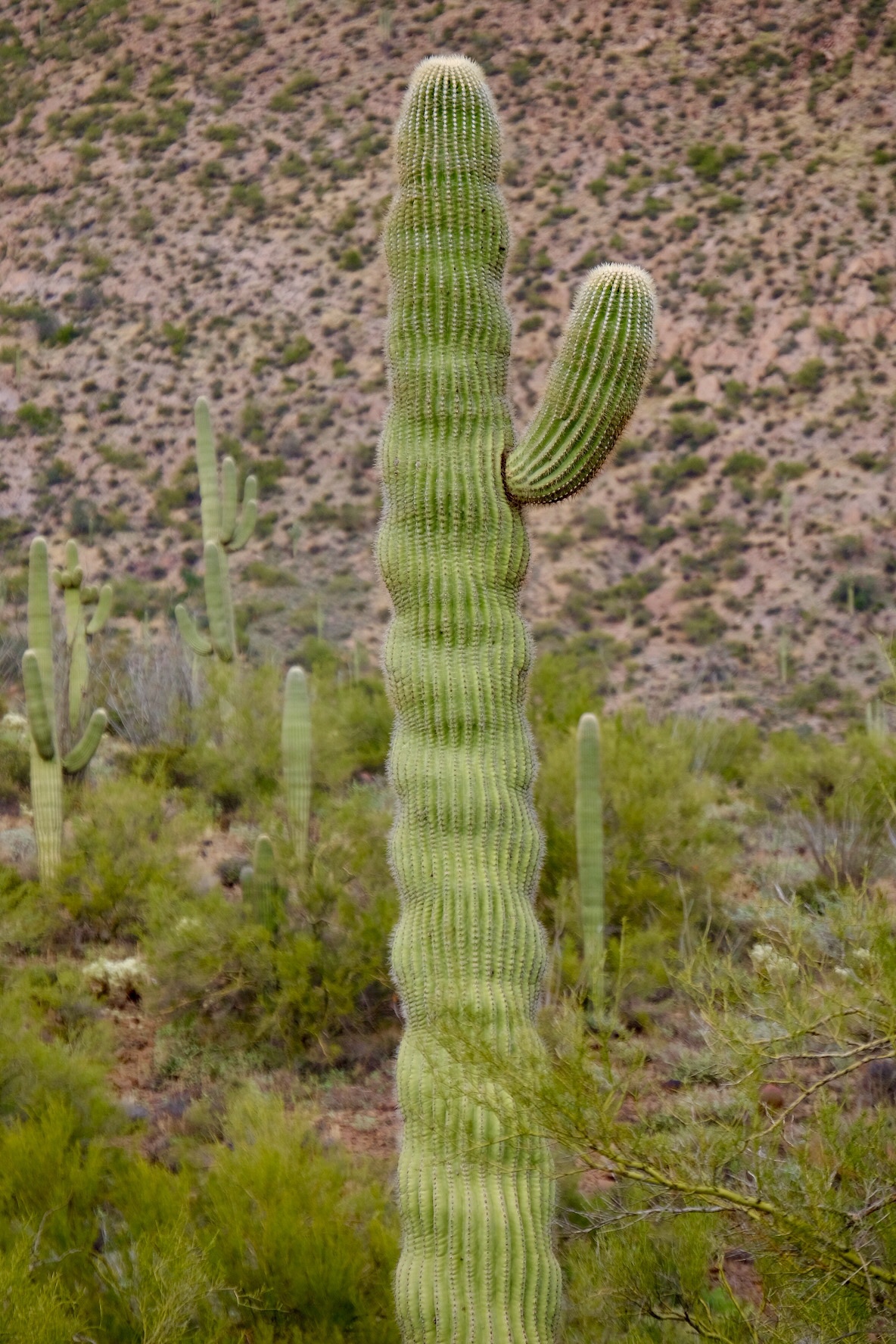 Although it was a bit rough (the maps caution this) and confusing in a few spots, overall, it was a great 6-miler that we had all to ourselves.

The next day was a weird one that started with my bi-yearly dental visit. I had to have a filling redone and expanded, which is always a terrific time. While I was in the chair, TBG went to the laundromat where he had a good time. Copy that? It is nice to find another activity he enjoys, and I’m sure we can work that into the schedule again in the future for him. He lost a pillowcase, though, so we’ll see. Then we went grocery shopping, and when we got home, I found that I’d been charged for four chocolate bars when I’d only gotten three, and I’d put four packages of a particular sausage in my cart and on the belt — I distinctly remember doing both — but only arrived home with one. I was only charged for one, but where did the other three go? My friend, Laura, thinks one of the Sedona vortexes attached itself to us. This is because a few months ago, I lost my sundae spoon, and I cried to her about it. I’d had that spoon for years and years, I think pre-TBG even, and it was the perfect spoon for many things, though I don’t think I ever actually ate a sundae with it. I think I’ve mentioned before that I simply DO NOT LOSE THINGS, and when something hides, no one rests until it is located. But the spoon was good and truly gone, and we could only surmise it had somehow gotten thrown away. I finally found some new sundae spoons at Walmart in a nonsense set of three.  Then we lost a fork. This I discovered as I was setting the Thanksgiving table. Seriously, what the hell? On the same day of the gone pillowcase and missing sausages, the fork appeared in the back of the fridge, suspended by its tines from the wire shelf. The Vortex taketh away and the Vortex giveth. I’d like it to giveth back the pillowcase, but it can keepeth the sausages.

Speaking of food, it was time for the Critter Feed at the Visitor Center! If you don’t care for such things, here is a picture of a pretty orange morph house finch for you. Thanks for stopping by, and we’ll see you in another week or so! 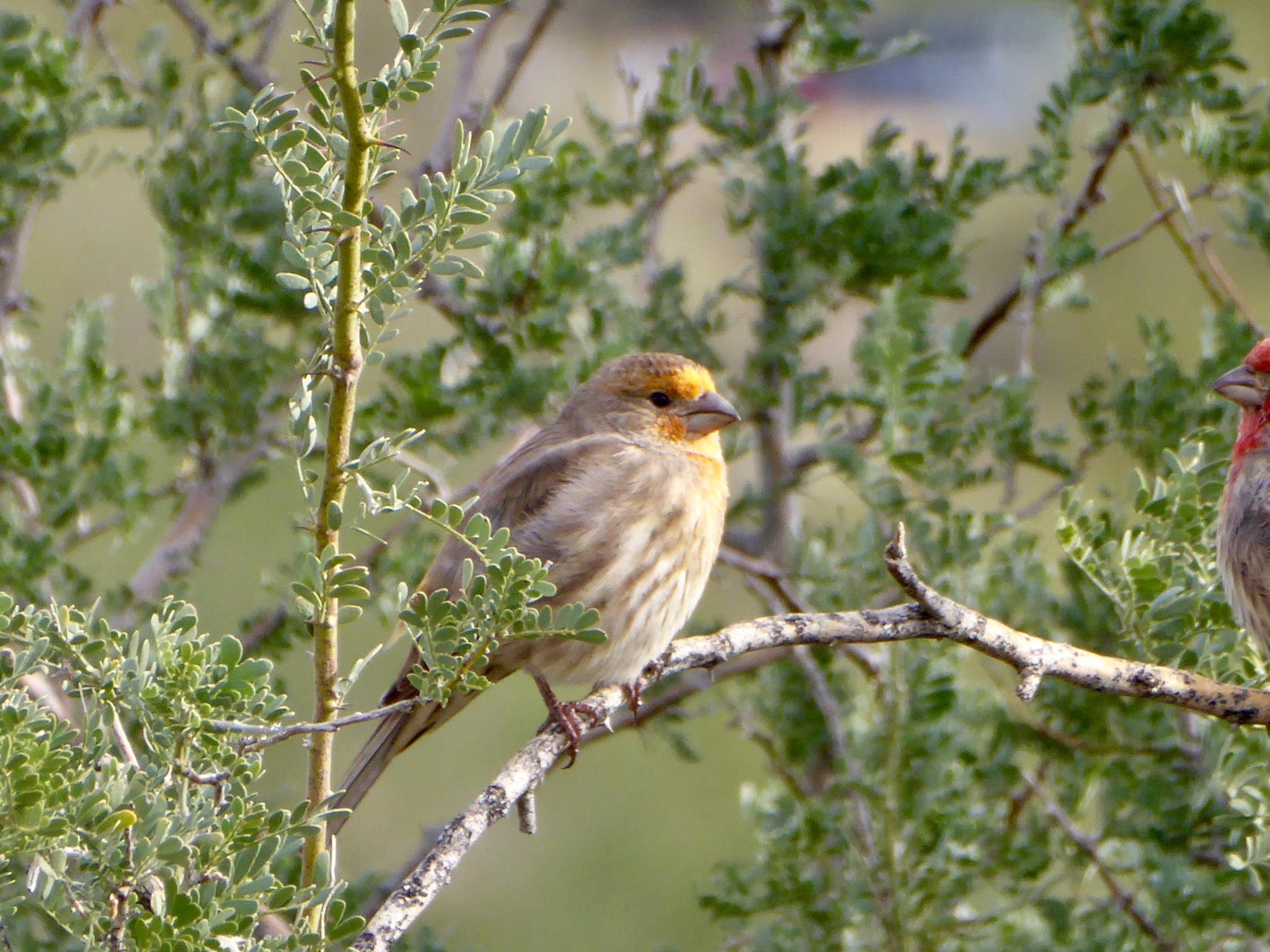 “Hello, I didn’t eat a lot of red stuff when I was molting, so I’m orange.”

For the rest of you, let’s go see what puts the snack in rattlesnacks!

Once a month, the ranger feeds all the critters, and he started with the spiders and scorpions, who all enjoyed baby crickets. Then it was time for the reptiles. Unlike at Lake Pleasant, these snakes are fed dead, previously-frozen food. The chunky three-legged Gila monster got five little mice and gulped them down one after the other. 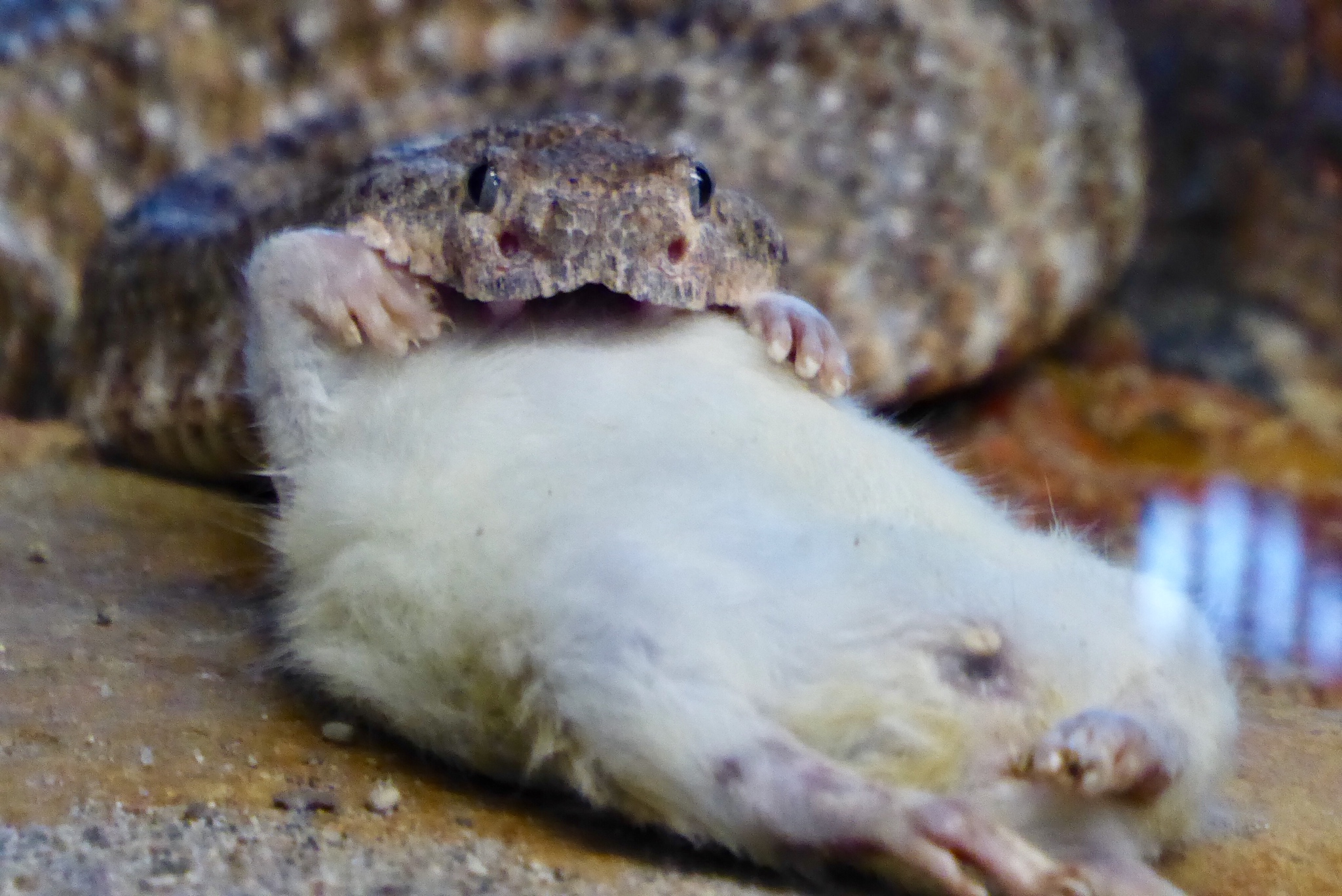 The Speckled she-rattler got a fat rat. 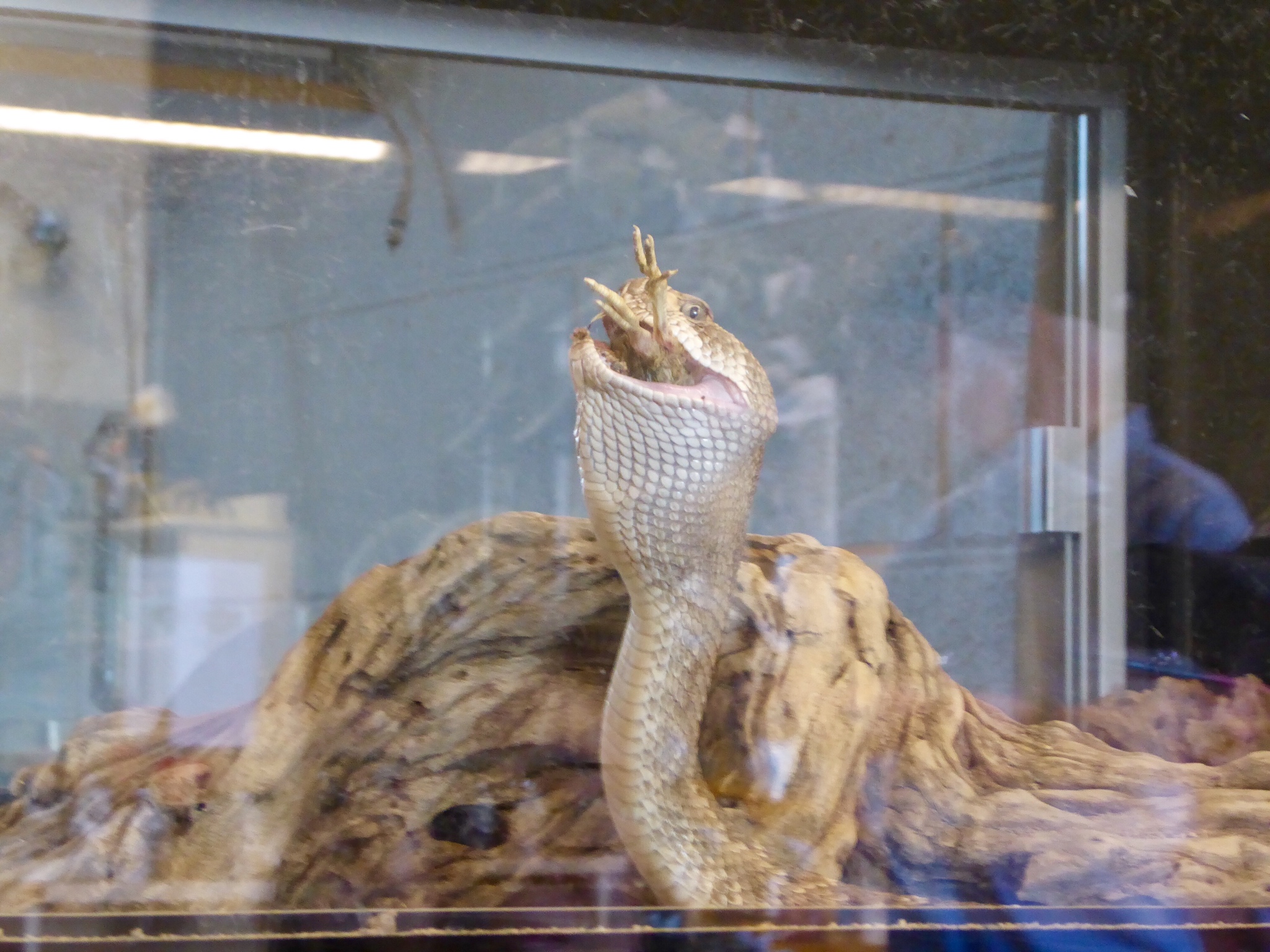 The overweight Diamondback was on a diet, so he got baby quail.

Other than an early morning bird walk I took with a park group on our last morning during which I took that finch picture, that wraps up our time at Cave Creek. We’re off to one more regional park next, and according to our sources, it’s the best one yet. If that proves not to be true, I’ll be getting new sources, but if it does, we’re in for a a real treat!