We have certainly had our down times since we hit the road, some planned, some foist upon us, but this was the longest stretch we’ve had of Nothing Much. I’ve been boring myself writing about it, and there are even some photos that were so humdrum, they required my mad drawing skillz. Get something with caffeine in it, and let’s get this done.

After our stay at Organ Pipe, we had to return to the Phoenix area in order to get some more RV maintenance performed that required dedicated diesel mechanics. We knew we needed this additional work after the general maintenance was done in Tucson, and that gave us latitude to re-configure our plans with a minimum of disruption. It also gave us our first taste of a military FamCamp. 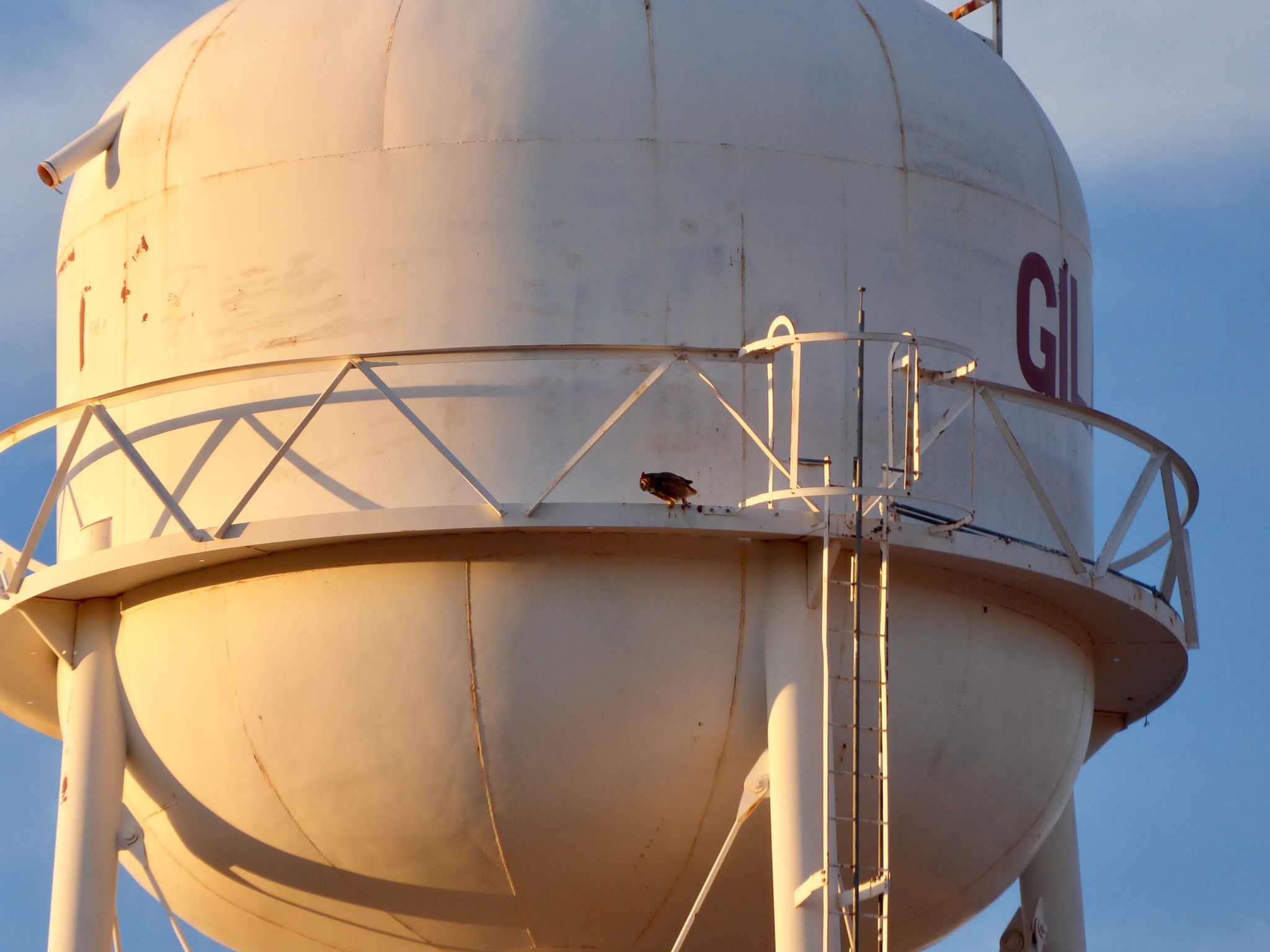 In January of this year, several more groups were added to the list of veterans who can access military FamCamps, and ours was one of them. This, obviously, opened up all sorts of additional choices for where we can stay across the country in our travels, and I immediately updated my route-planning spreadsheet to make note of camps that might fit into our itinerary. We hadn’t expected to pull into one quite so soon, but the one in Gila Bend was directly en route from Organ Pipe to Phoenix, and we had a week to fill before our appointment.

This particular facility is an auxiliary base, which means that the RVers outnumber the active duty personnel. I would show you photos of it, but being a military installation with an active runway (mostly used for touch-n-goes by F16s and F35s from Luke AFB a couple times per day on weekdays) photographs are discouraged. 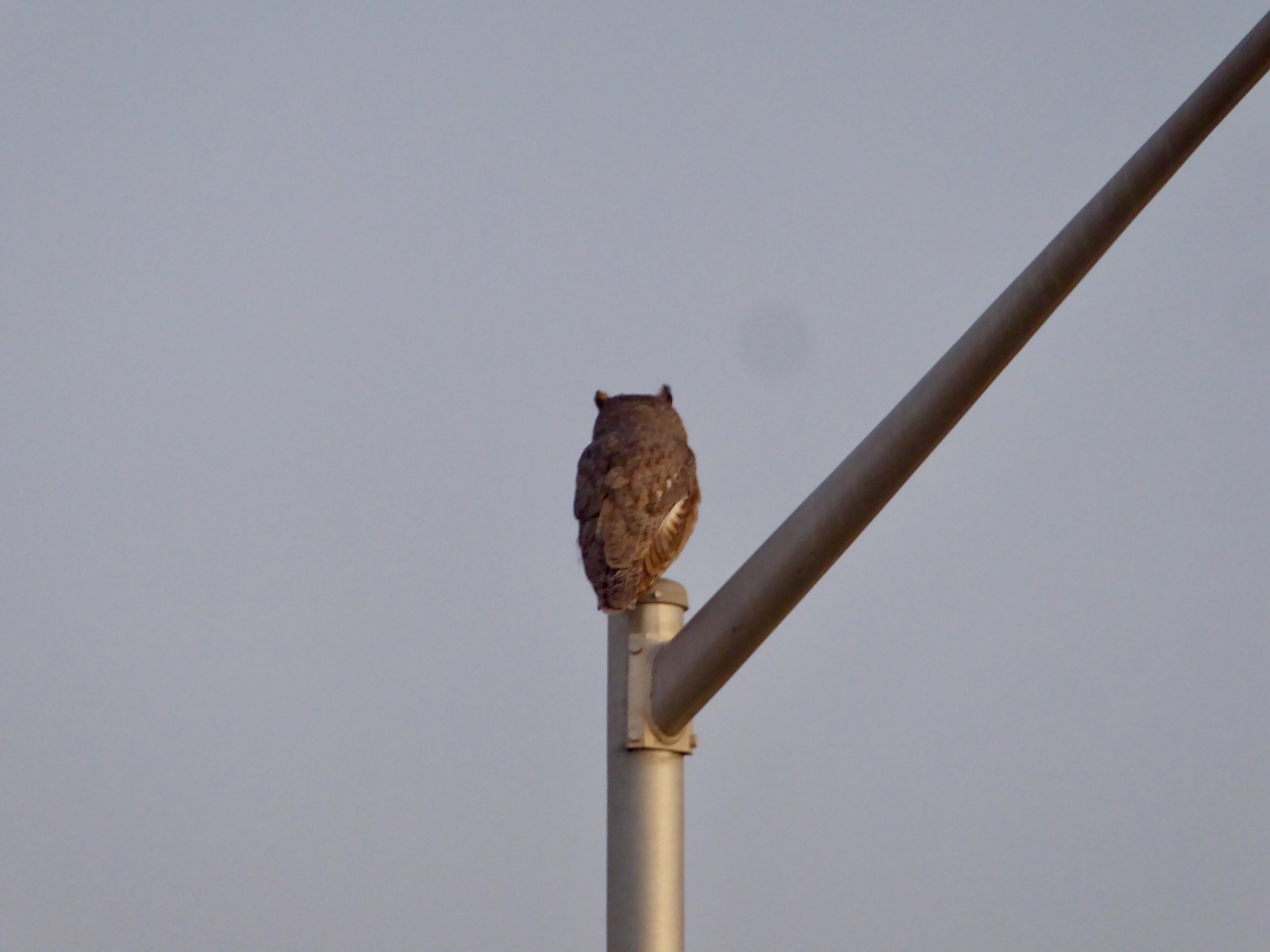 Great horned owl doesn’t like her picture taken, either.

Because this FamCamp is in the middle of nowhere with the nearest town of Gila Bend offering precious little in the way of amenities, you’d think it was not popular. Au contraire, my civilian readers. Because of the low cost and abundant sunshine, it was always full, with many folks who return year after year, spending all winter here. Many other FamCamps, since they are often located directly on or adjacent to active duty installations, include the use of all they have to offer like shopping, rec facilities, etc. Not here because it doesn’t have any of that stuff. So what on Earth did do for a whole week?

Well, the first morning, while I was waiting for the hummingbirds to find my feeders, I noticed someone who looked familiar a couple rigs away. She never turned her face my direction while I was spying, but I was pretty sure I recognized the hair. I quickly pulled out their business card with a photo of their rig, and determined it was Emily of OwnLessDoMore who we had met in December! We two former Jazzercise instructors (!) reconnected while we both took advantage of the free laundry room and made plans to go out for a bite that evening since they were only there for an overnight. 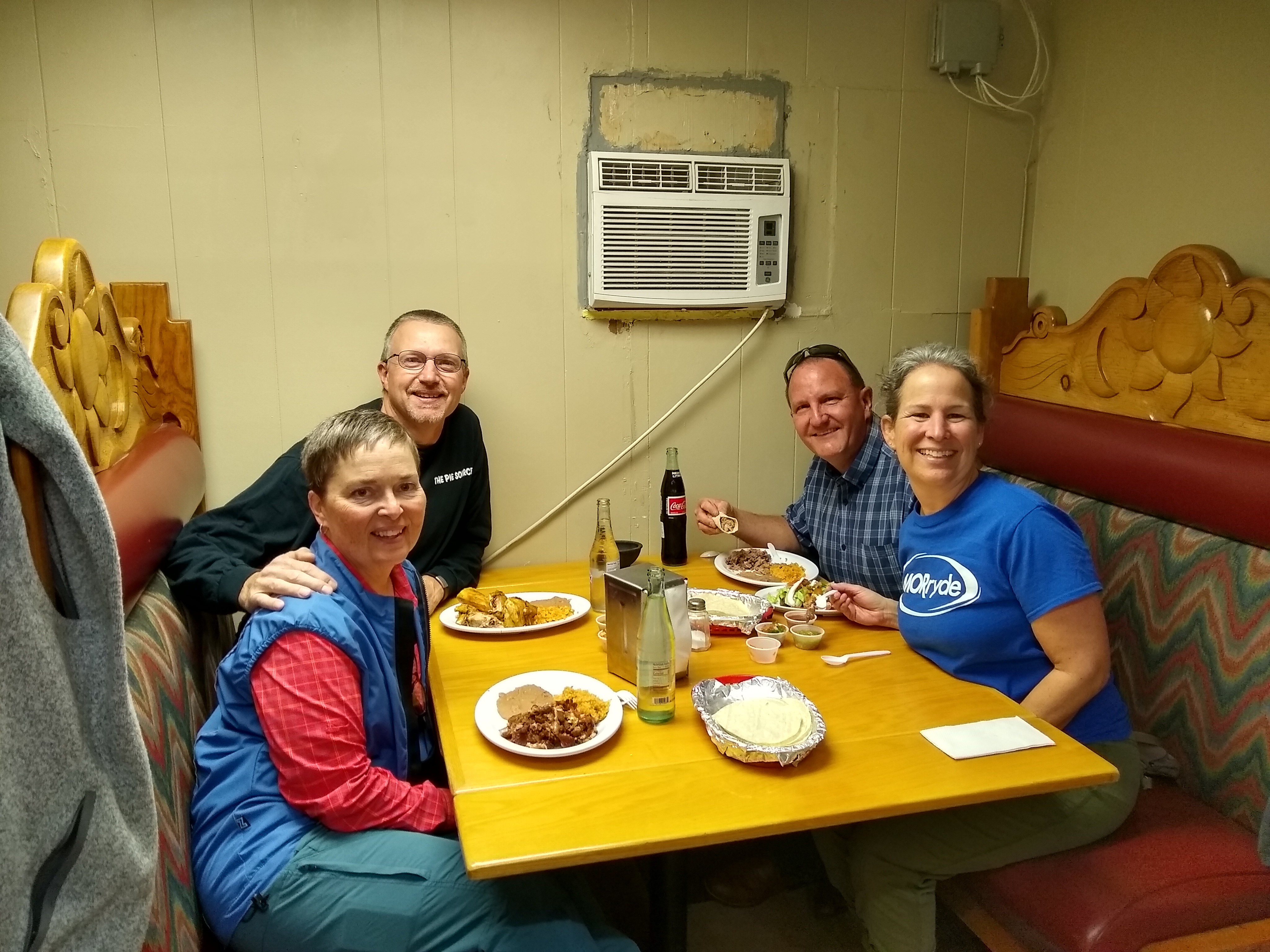 Tim chauffeured us into town, where we had really delicious, authentic Mexican food at Mercado de Amigos Carniceria. You’d never know it from the outside, and, in fact, we drove by it the first time, but true to the online reviews, this place was pretty darn good. More excitement was waiting for us back at the gate to the base. Without going into boring detail about how FamCamps work, all you need to know is that, although I am a veteran, I need to have an escort to be out and about on base because I am not the veteran whose service falls under the new provisions. No problem, I had two very fine escorts in the driver’s and passenger’s seats, right? Not so fast, said the security guard, I hadn’t been properly vetted originally, so would I please exit the vehicle and take a seat in the guard shack? There was paperwork to be done that could take up to four hours. Four hours?! Tim was spittin’ mad, and TBG was plain confused since this information directly contradicted all prior information. I got out and cooperatively took my seat, while Tim took TBG back to get our car so he could come back stay with me. I looked around the kiosk, bleakly realizing there was no bathroom, and not having proper I.D. was soon going to be the least of my problems. Just as the guard was handing me a clipboard full of forms to complete, much to my relief his relief showed up. When the situation was explained to him, he looked at the first guard and said, “What are you doing?!” Long story short, first guy wasn’t paying attention when the rules changed five months ago, and I should not have been detained. He was very apologetic, I decided not to have him fired, and I was sprung from the Security Kiosk Hoosegow.  And we thought nothing exciting would happen here!

Every day, we took long walks all around the facility streets, and we’d found some oranges still clinging to a tree. TBG plucked one down for me, and though a camp resident informed us it was an ornamental orange and probably not very palatable, it was still edible, so I used it to make another flourless orange cake. To be concise, it was a bit too pithy. 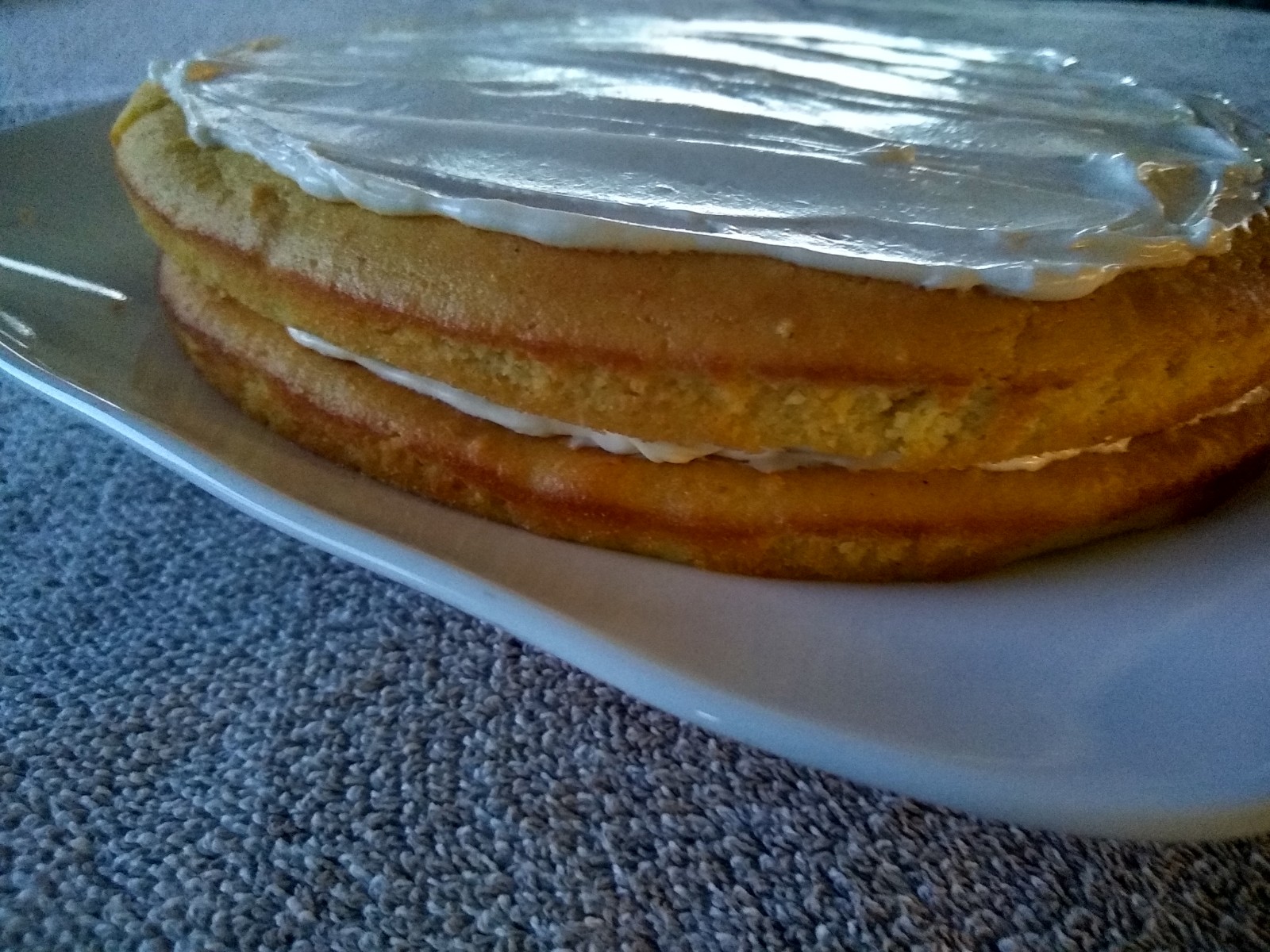 At least the cream cheese frosting was tasty.

The lobby office was always left open for guests, but we never availed ourselves of the large-screen cable TV or the computer with free wifi, but it was a nice lounge area. The laundry room also held an assortment of jigsaw puzzles, books, and a smattering of golf clubs for the scrubby make-shift 18-hole course a few of the yearly residents had constructed over time. There were actual tennis courts and basketball hoops if you had your own equipment, which we didn’t, and a quarter-mile sandy gravel running track, if you had your own shoes, which we did. 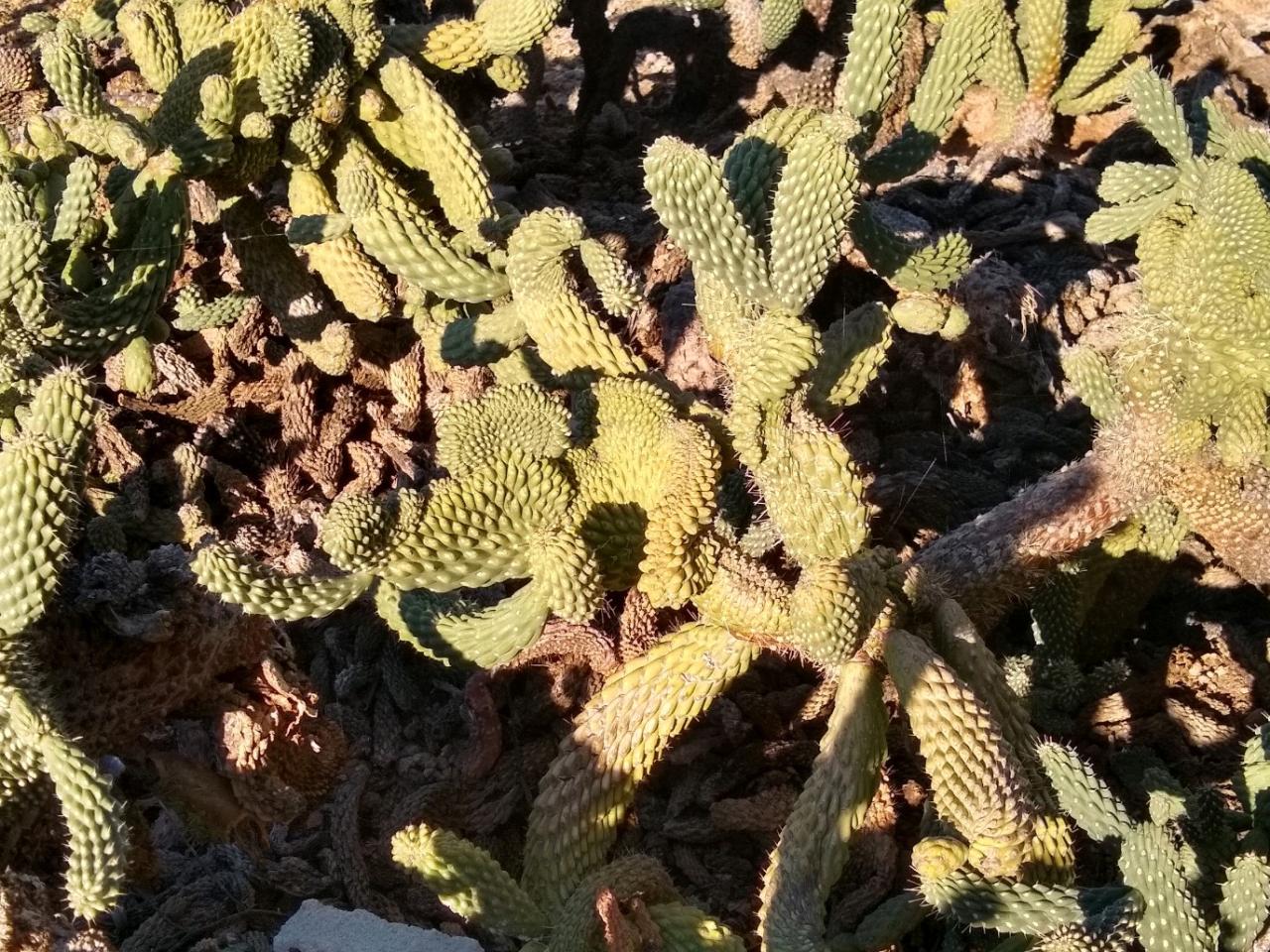 We drove into town one other time to pick up a few things from one of the two dollar store places (no proper groceries in Gila Bend) and to stop in at the Visitor Information Center. It was a small room with a brochure rack on one wall and a card table with one folding chair in which sat the mayor’s wife, who advised me that there was no safe hiking nearby at all, but thanks so much for stopping in!

Though our week there felt about five days too long, our next “camp” made us recall our time there with great fondness. 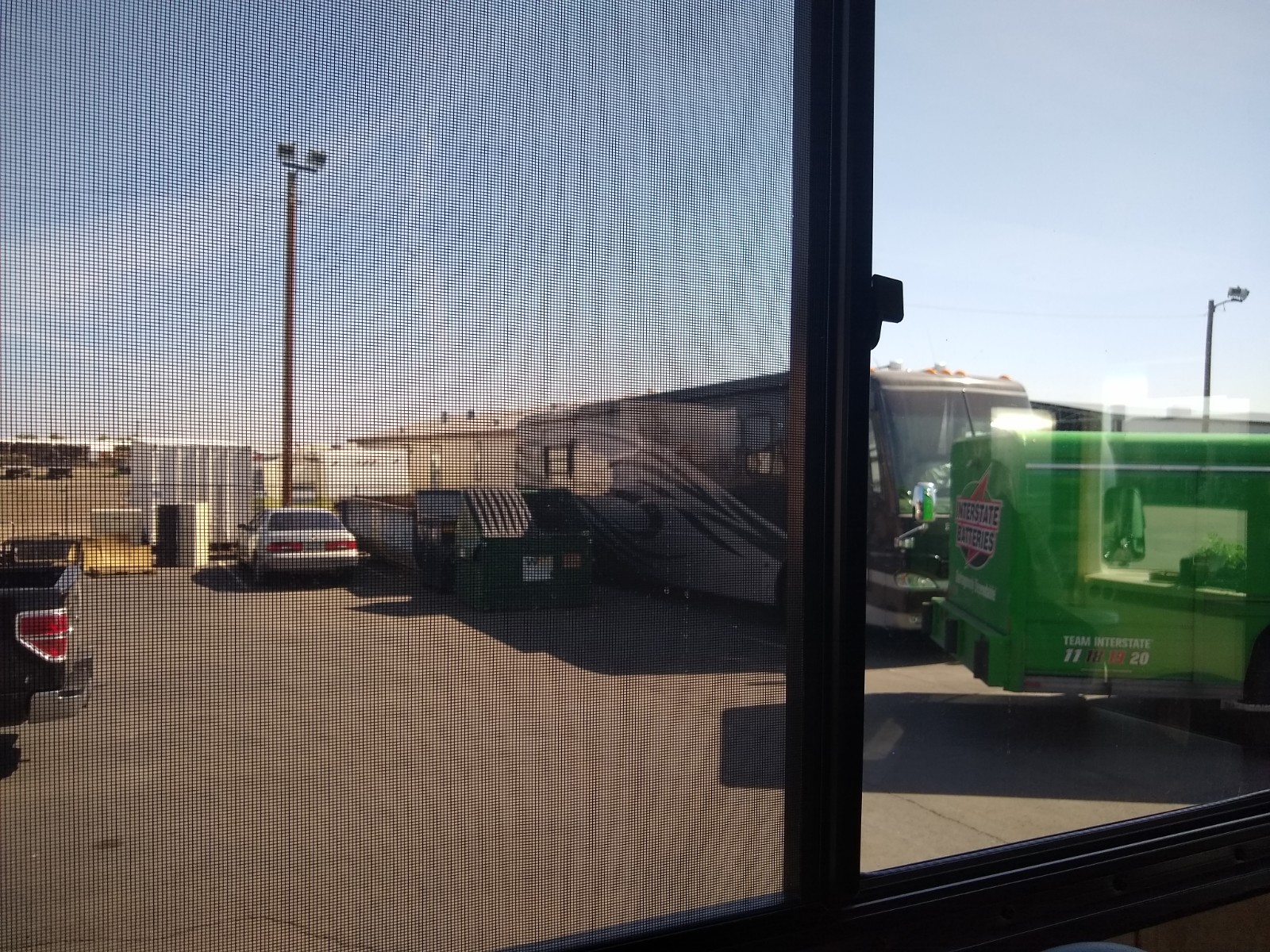 The view from our dining room.

Fortunately, we were able to stay in the coach during the repairs, with electrical hookup and access to fill water. Unfortunately, big rigs came and went sporadically all night and those lights you see in the above photo were wonderfully illuminating.

Some days we parked ourselves in the shop’s breakroom, where we had space to spread out and do computer stuff. 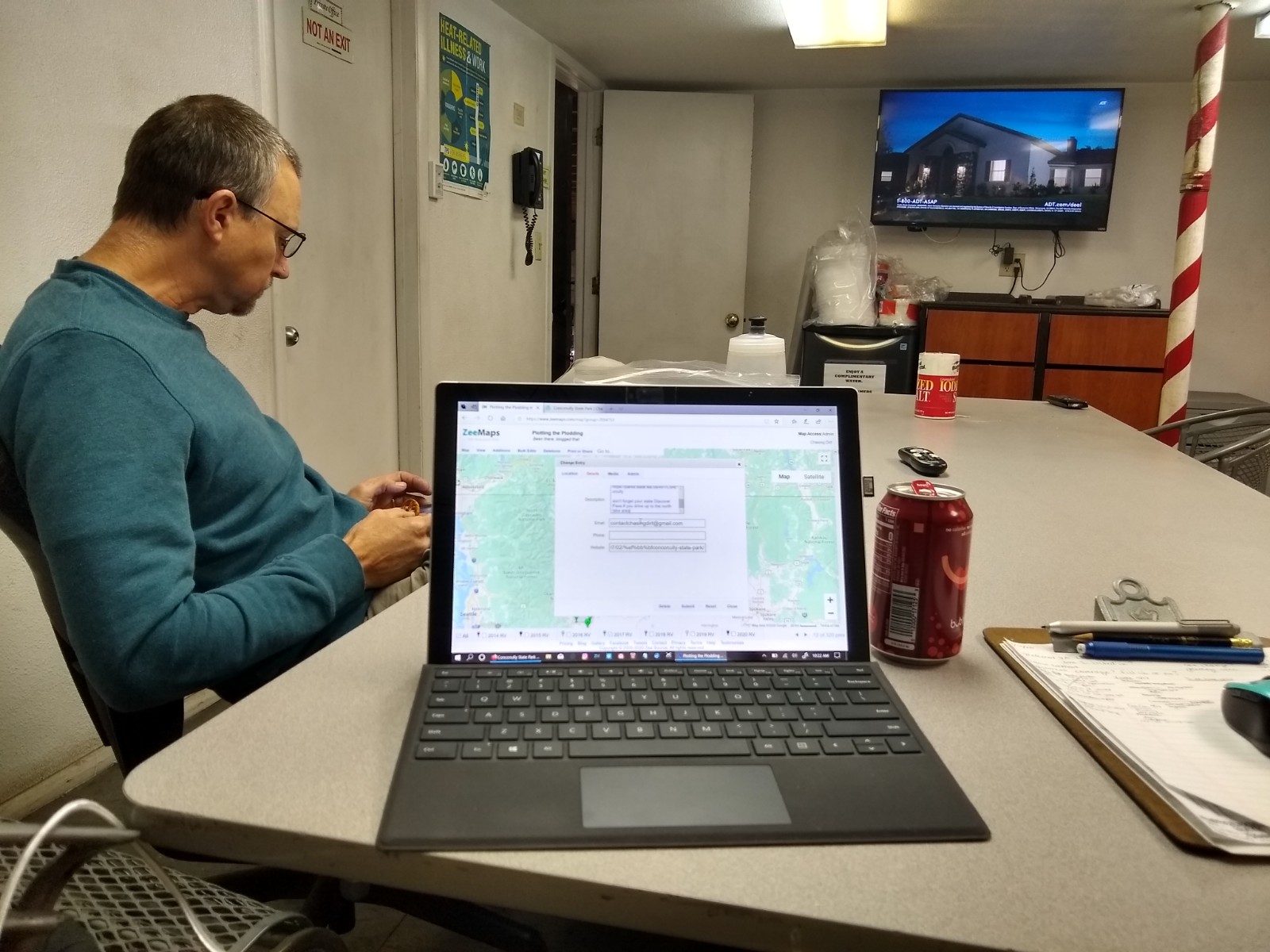 Updating my blog map and reviews. 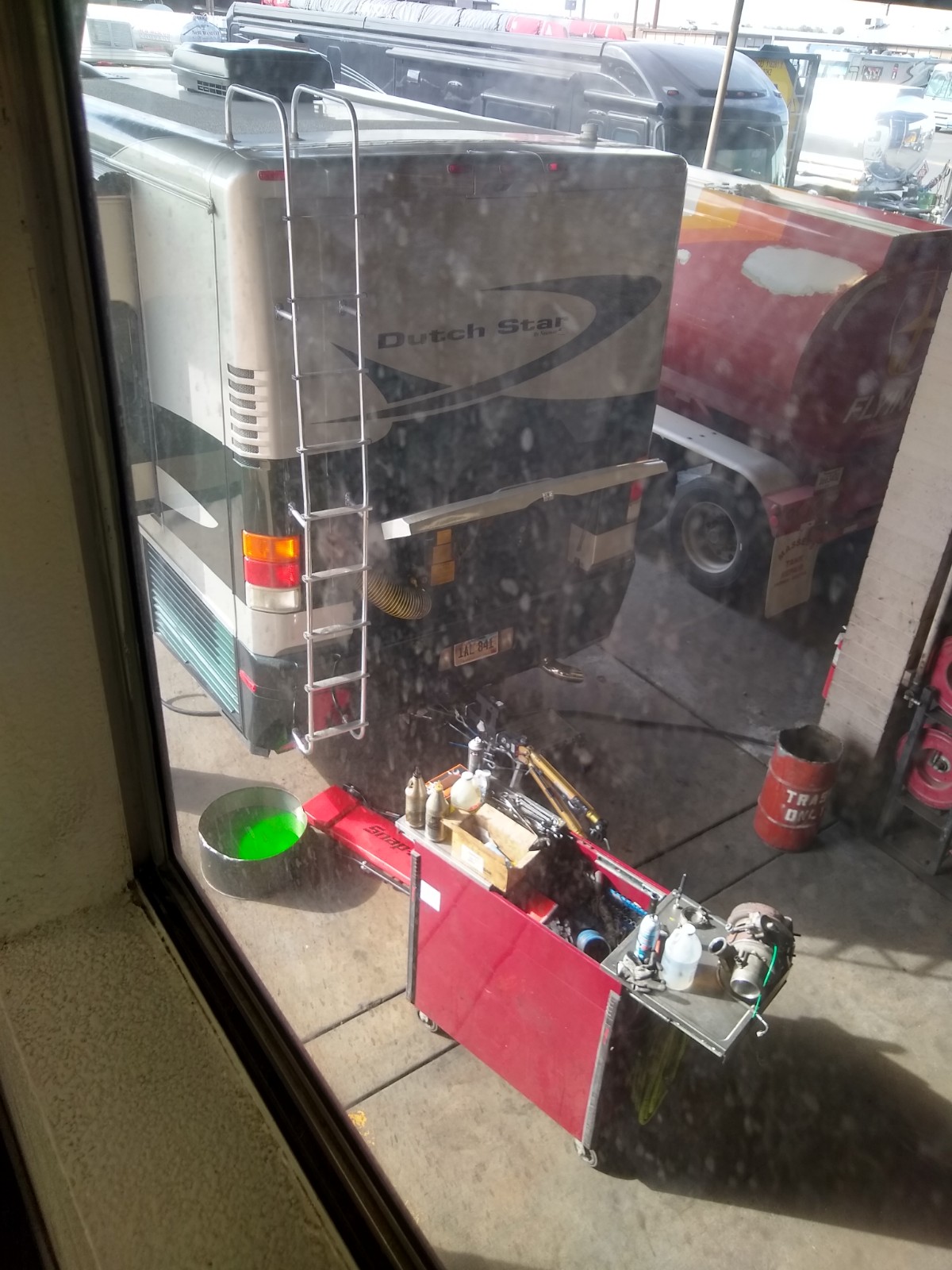 TBG kept an eagle-eye on the progress down below.

There was even some wildlife! 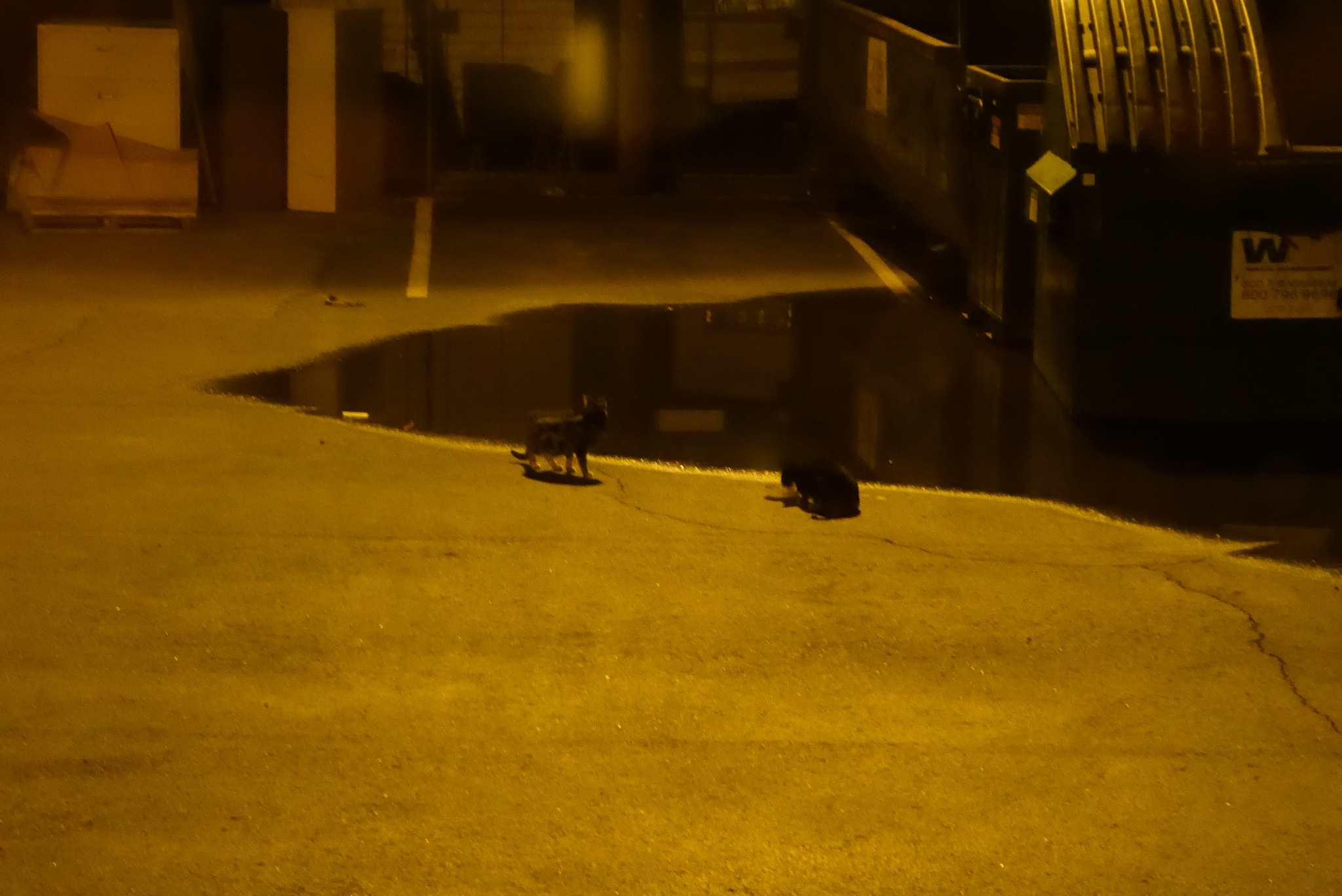 We interspersed our butt-numbing days of sitting with a few short hikes.

“TBG” is drawn to the Bursera Trail.

Our first leg-stretcher was a nice loop near South Mountain. 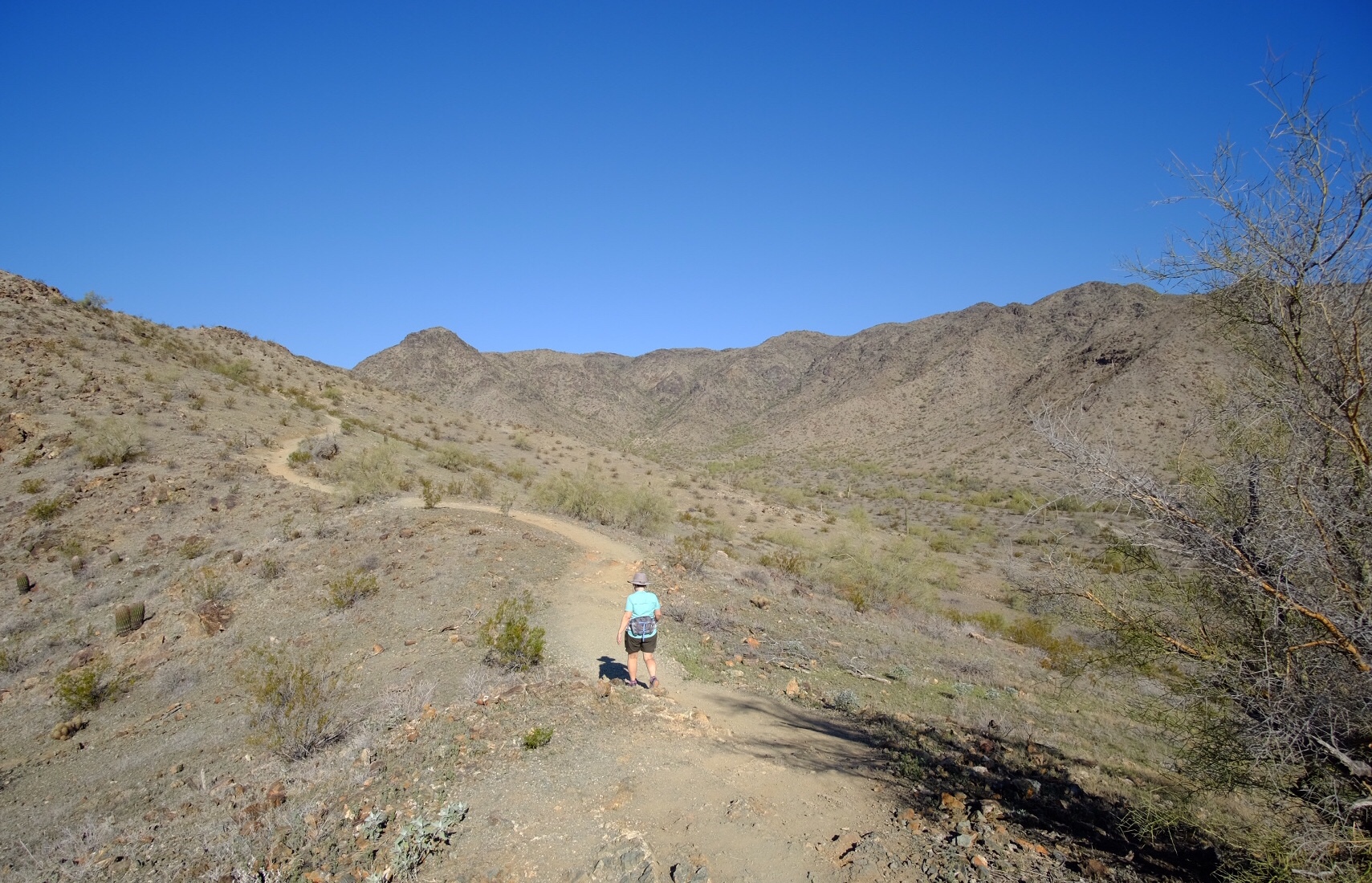 The songdogs’ melody echoed off the hillsides. 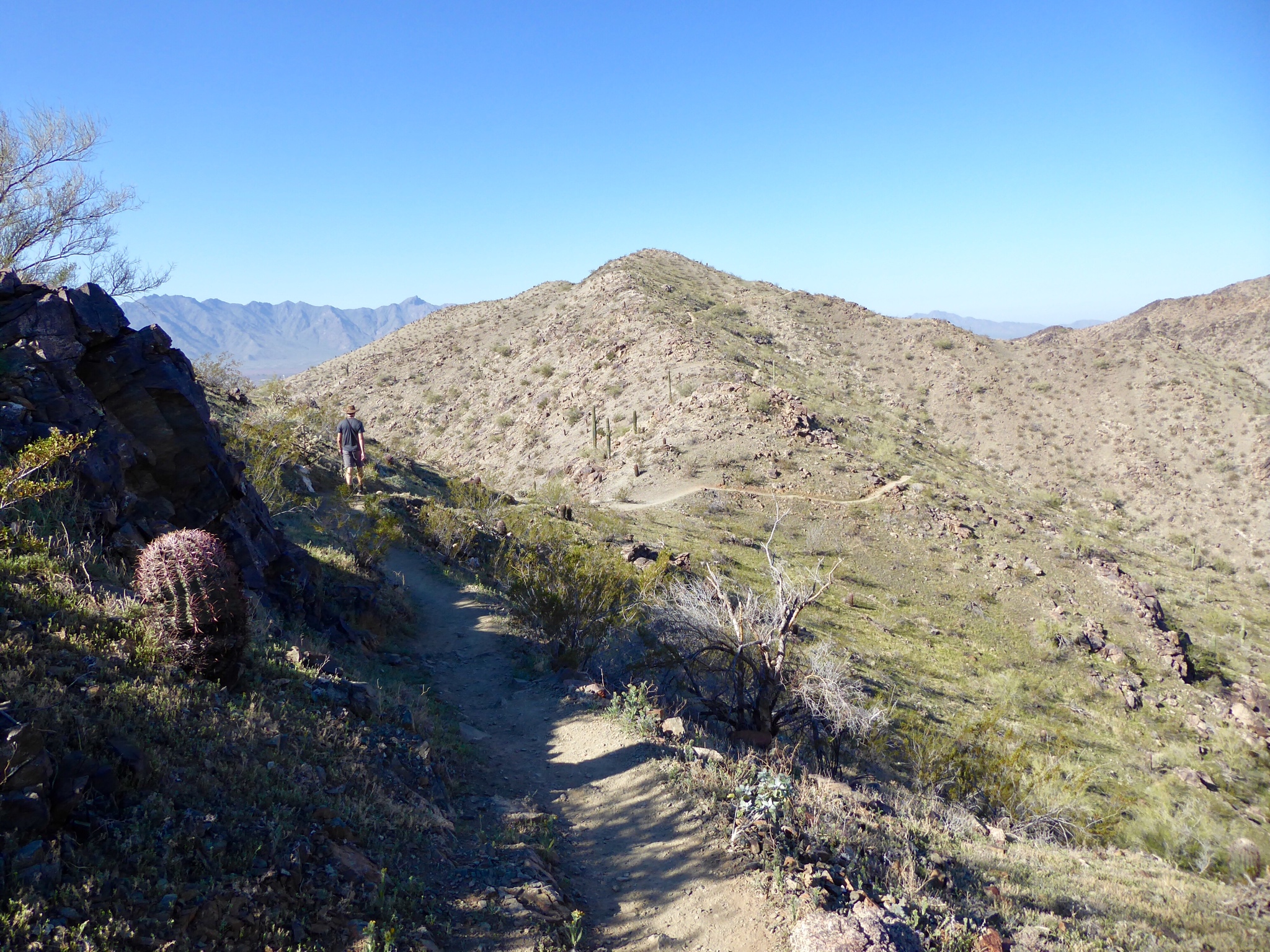 A welcome break from the noisy repair shop.

Arizona poppies, a blister beetle, and a cresting saguaro added color to the day.

On our way to another hike over the no-repair-progress weekend, we stopped in to see TBG’s friend, Jerry, in Mesa again. While the guys chatted, I espied several critters from Jerry’s balcony. As I was scouring the trees for different birds, my eyes were caught by a flash of red and yellow, and my first thought was tanager, but that seemed unlikely. Then I focused in, and to my delight, I was looking at a pair of peach-faced lovebirds! My friend, MonaLiza, had seen them late last year at her campsite feeder, but I’d abandoned hope of sighting them myself. I tried to get a picture, but they were too far away.

Artist’s rendering of the pretty little parrots in the tree where they were really espied.

I was so happy to see them since it will be a long, long time before we’re back in this area, and it’s the only place they can be found in the U.S. Theirs is an interesting story of an intentional non-native release and subsequent thriving without hurting existing native species. Jerry says he sees them often in his peach tree once it fruits. I love that peach-faced lovebirds love peaches.

Blank signs are no match for a seasoned sign-pointer! 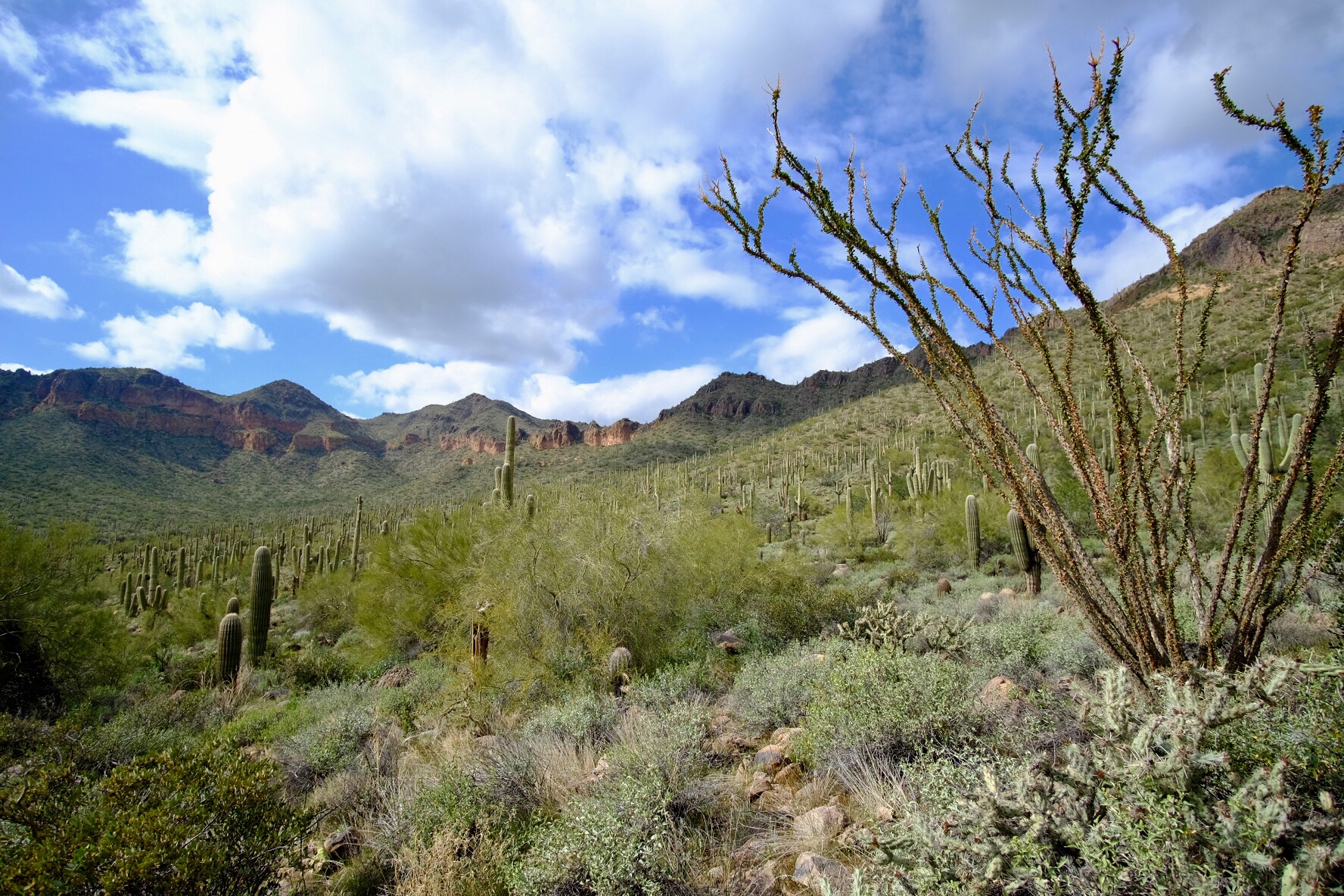 The air was refreshing after the record-breaking rains. 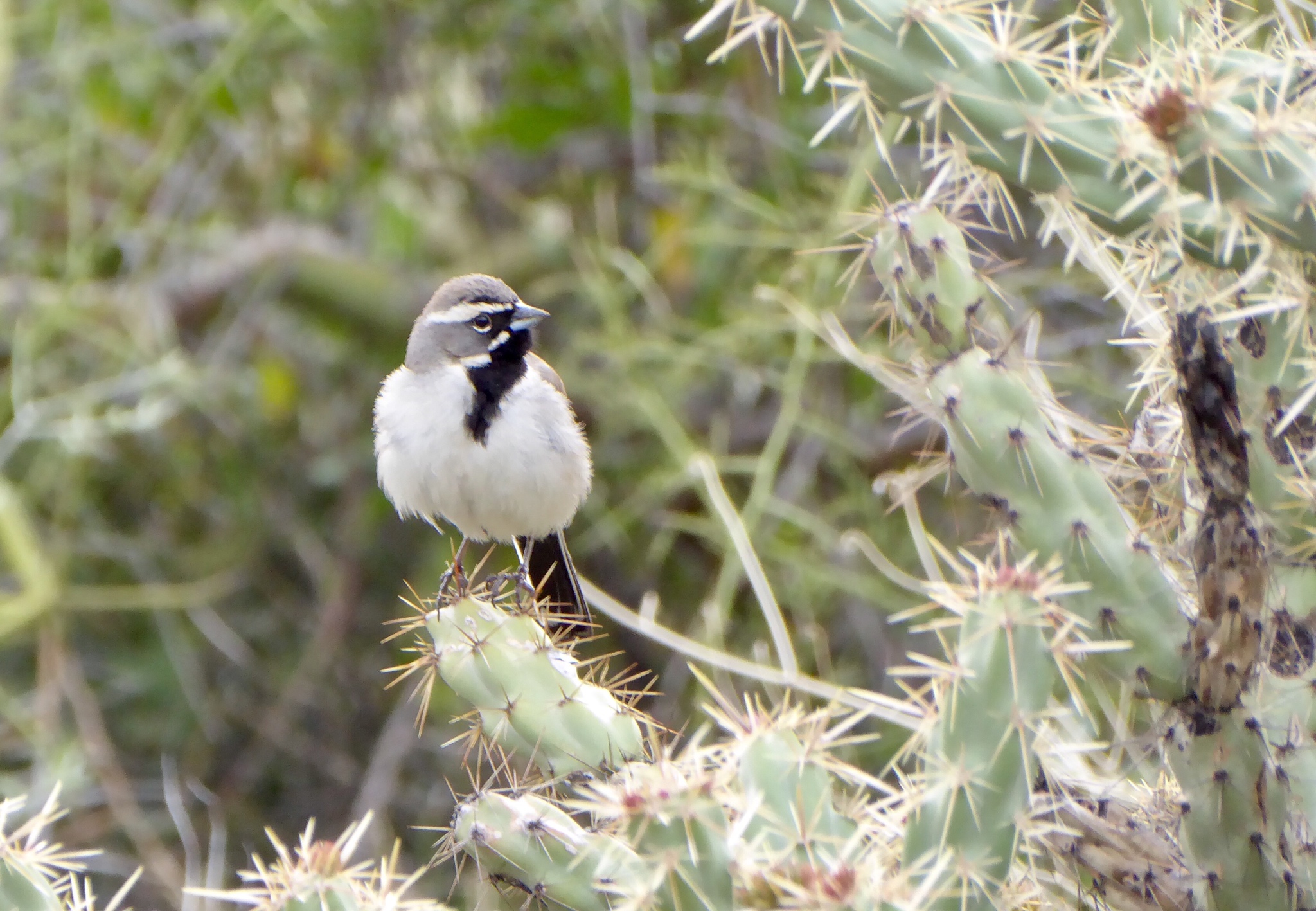 A black-throated sparrow sang all about it.

Our last day-and-a-half was pretty much miserable, with “wasted” good weather, a bunch of waiting around, and a big, fat bill at the end of it all. Wahoo! Then it was a late start and a bumpy highway drive to our next destination of Kingman. We arrived to get the last spot at the little park we’d chosen, right about dinner time — the latest we’ve arrived at a campground in a long time. We really only wanted to stay one night, but we needed to shop, shower, and not drive again right away, so we opted for two. Then, we thought we’d have a nice walk during our one full day. 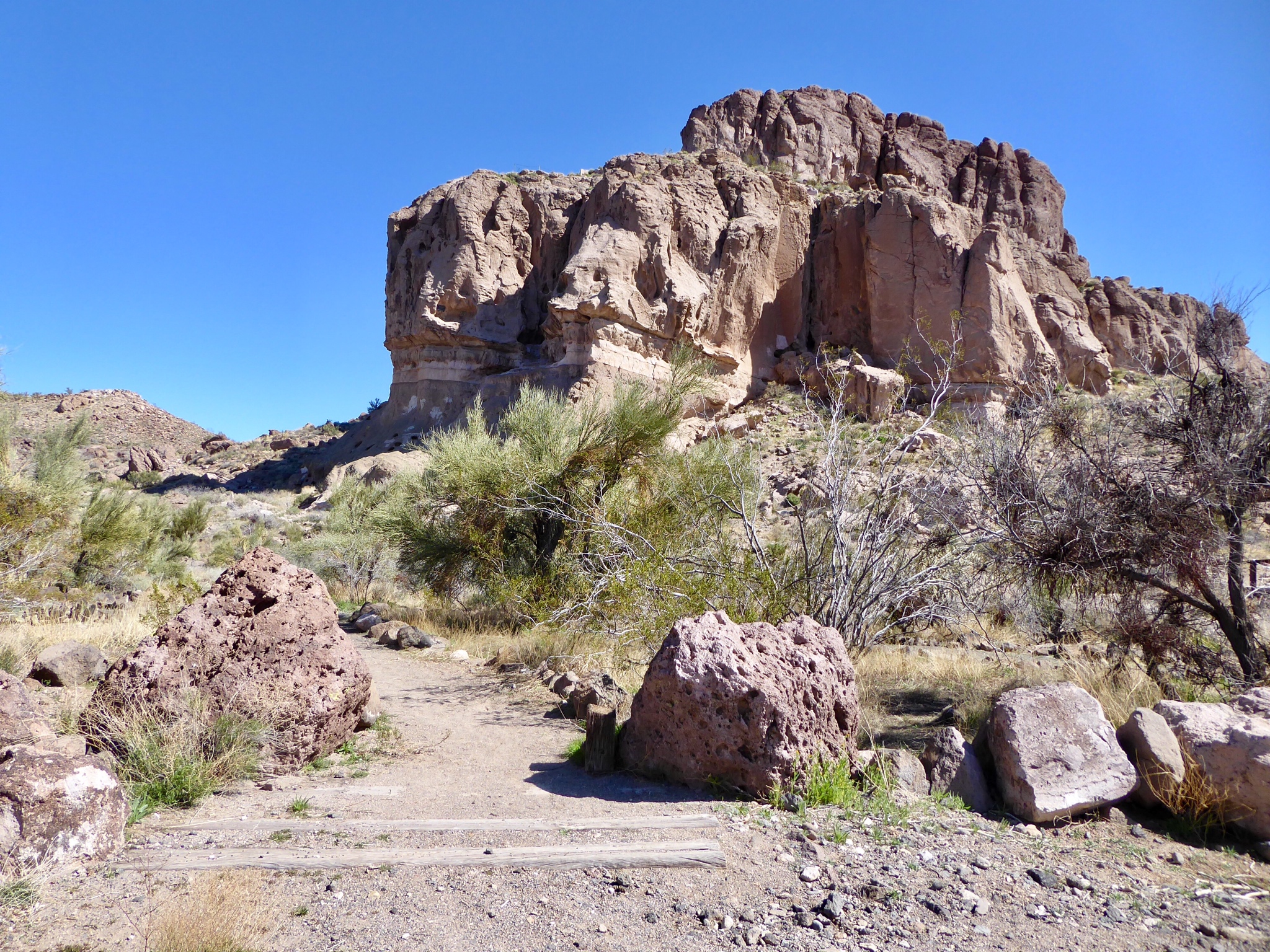 No sign? Then no sign-pointer at White Cliffs Wagon Trail.

What should’ve been a decent walk was mostly unappreciated by two very crabby people not yet decompressed from being off their routine and slightly sleep-deprived.