Part 2?! What happened to Part 1? Isn’t this Still Life? What’s the big idea? And why does it say Zion twice in the title?

Stop badgering me, and I’ll tell you!

Last question first, I want to point out that Zion is the only N.P. whose four-letter designation ZION is its actual name. Ok, then, to the rest.

We had originally planned to come through southern Utah in April, and those plans would have had us at Capitol Reef and Canyonlands National Parks. Zion wasn’t on the list for 2020 because we had visited it in 2009 (with TBG’s whole family) and while it’s certainly a park that’s worthy of a return visit, we had wanted to spend time at a couple new-to-us parks.

When we first arrived in Hurricane, which is about a half-hour drive to Zion’s main (southern) entrance, the park was still open, but barely, and the reports of overcrowding were sufficient to keep us away. Once the shutdown was complete, we were resigned to the possibility that we’d not be able to re-visit this year at all. We counted ourselves lucky to have hit so many of the iconic spots in ’09.

On May 13, the park re-opened on a limited basis, and we made the potentially regrettable decision to head in. We hoped that, being a Wednesday with no shuttles running or visitor centers open and several of the signature trails closed for various reasons (C19, maintenance, rock slides) it wouldn’t be too bad. We braced ourselves to be trapped in an endless line of cars with the possibility of peeing our pants.

We needn’t have worried. The gates were wide open and deserted since no fees were being collected for the time being. There were plenty of spaces in our chosen lot and masked park workers were at the ready to assist and direct visitors. The restrooms were also open, so no pants were peed. 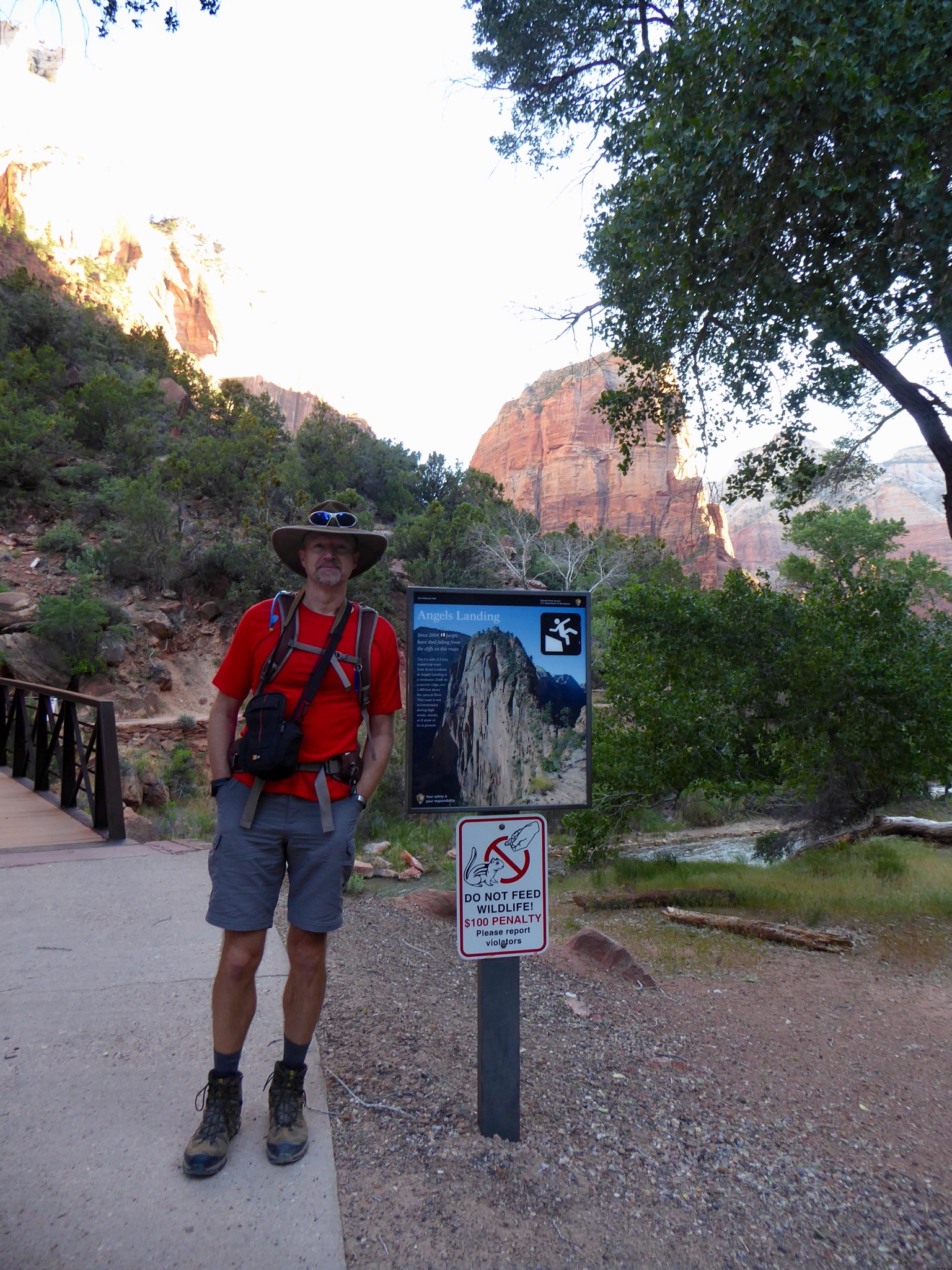 We had to repeat a section of trail we’d done in ’09 in order to get to a part we’d not. The sign says Angels Landing, and this is the way there, but it is actually the West Rim Trail. The first mile is a moderate climb through Refrigerator Canyon, then the next mile climbs up a series of 21 short, steep switchbacks called Walter’s Wiggles. 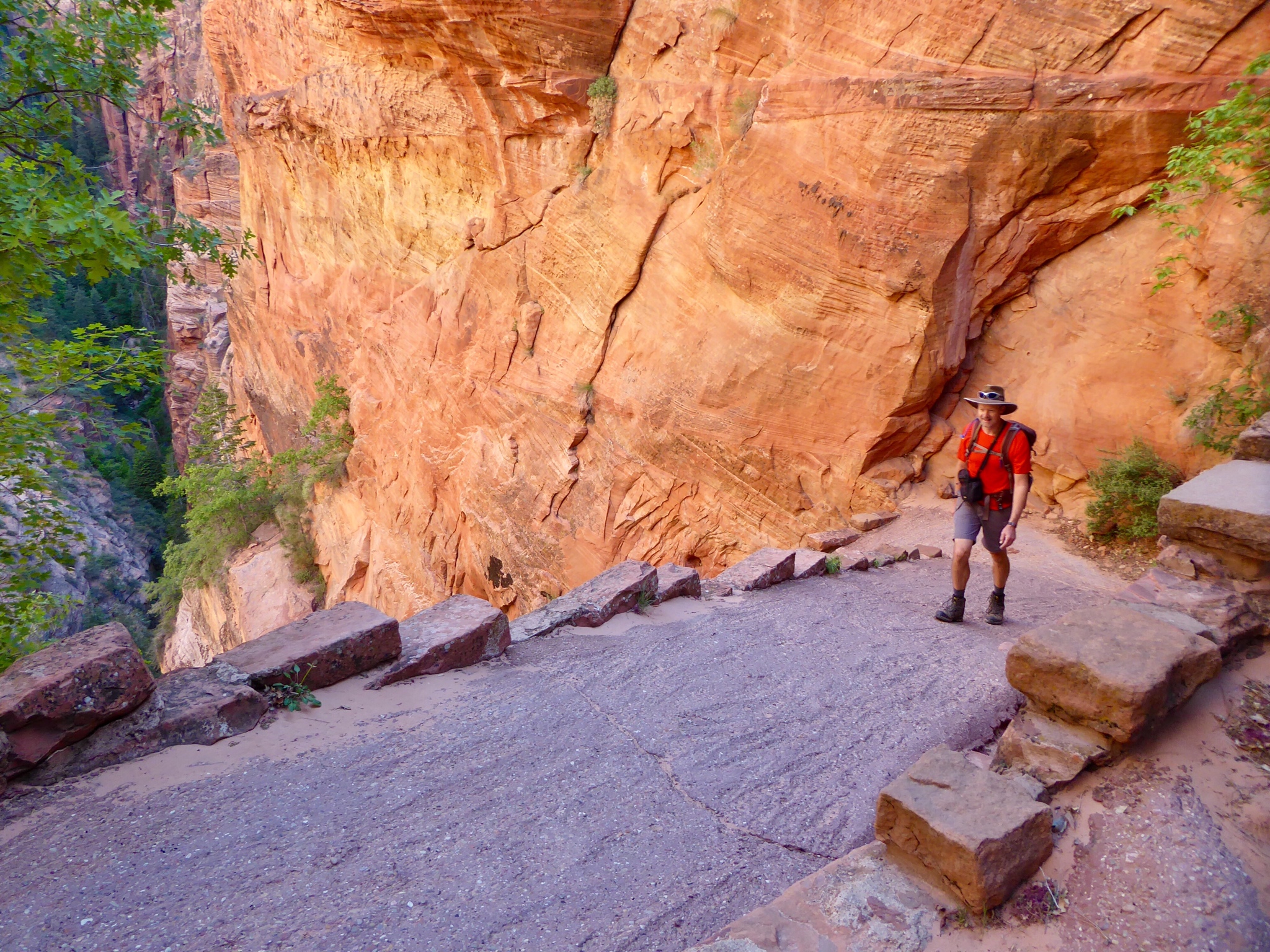 A total of 1000’+ later, the Wiggles dump you out at Scout Lookout, a good place for a breather, a restroom break (facilities provided) and excellent views into Zion Canyon. From here, you have three choices. You can take the treacherous half-mile trail out to the tip of Angels Landing (currently closed), call it a day and head back down, or continue out the West Rim Trail, which is what we did. 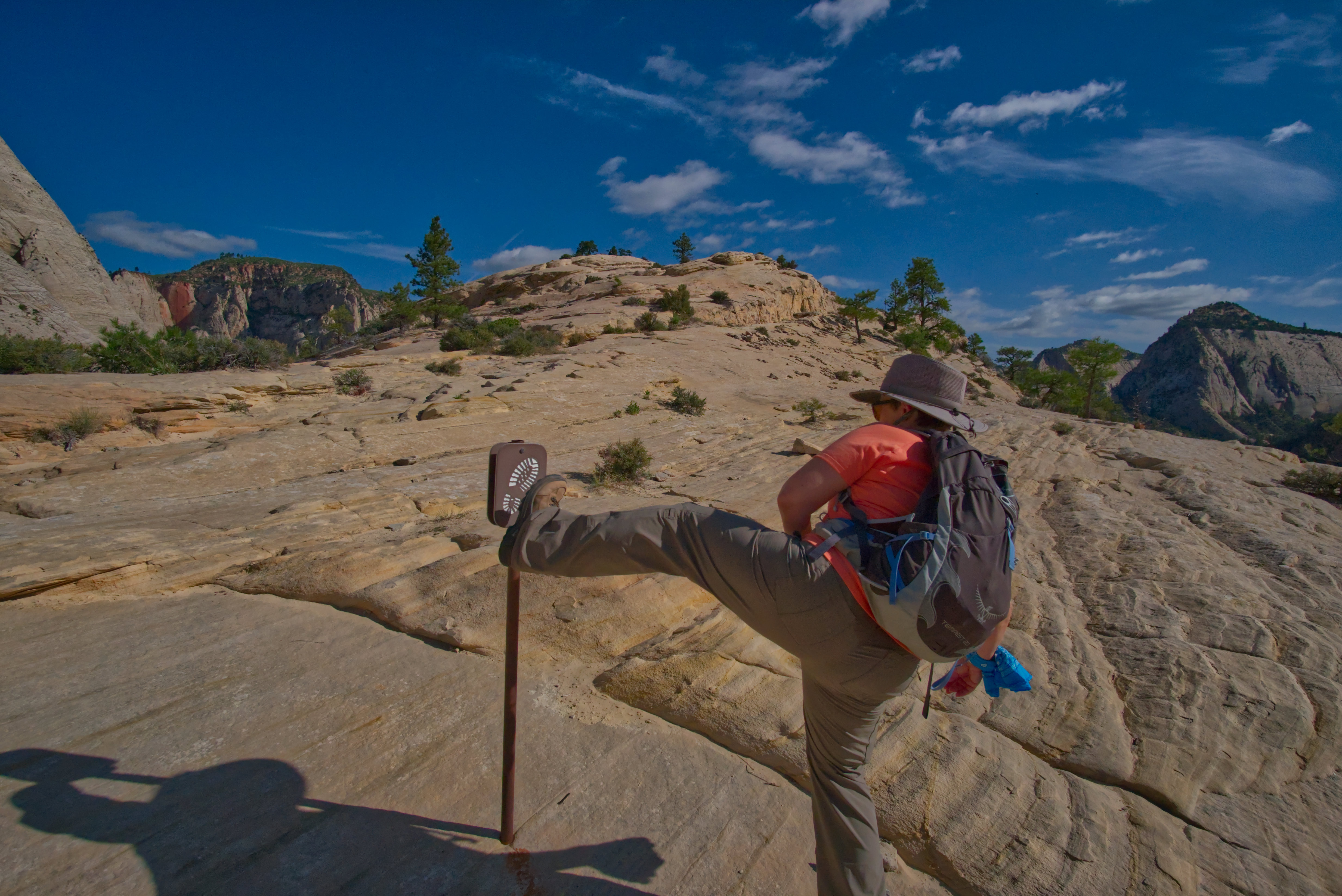 Making these signs is hard.

One of the “problems” with monumental hikes that offer jaw-dropping views at every turn is that you end up with an overwhelming number of photos to sort through and choose from. I helped mitigate that problem by dropping my camera lens-first onto the trail where it literally bit the dust. TBG takes better scenery photos anyhow, and I will just let some of the best ones do the talking, but they might be out of order. If you’re not familiar with this hike, you won’t know the difference. I did the hike, and I can barely tell the difference, so we’re even. 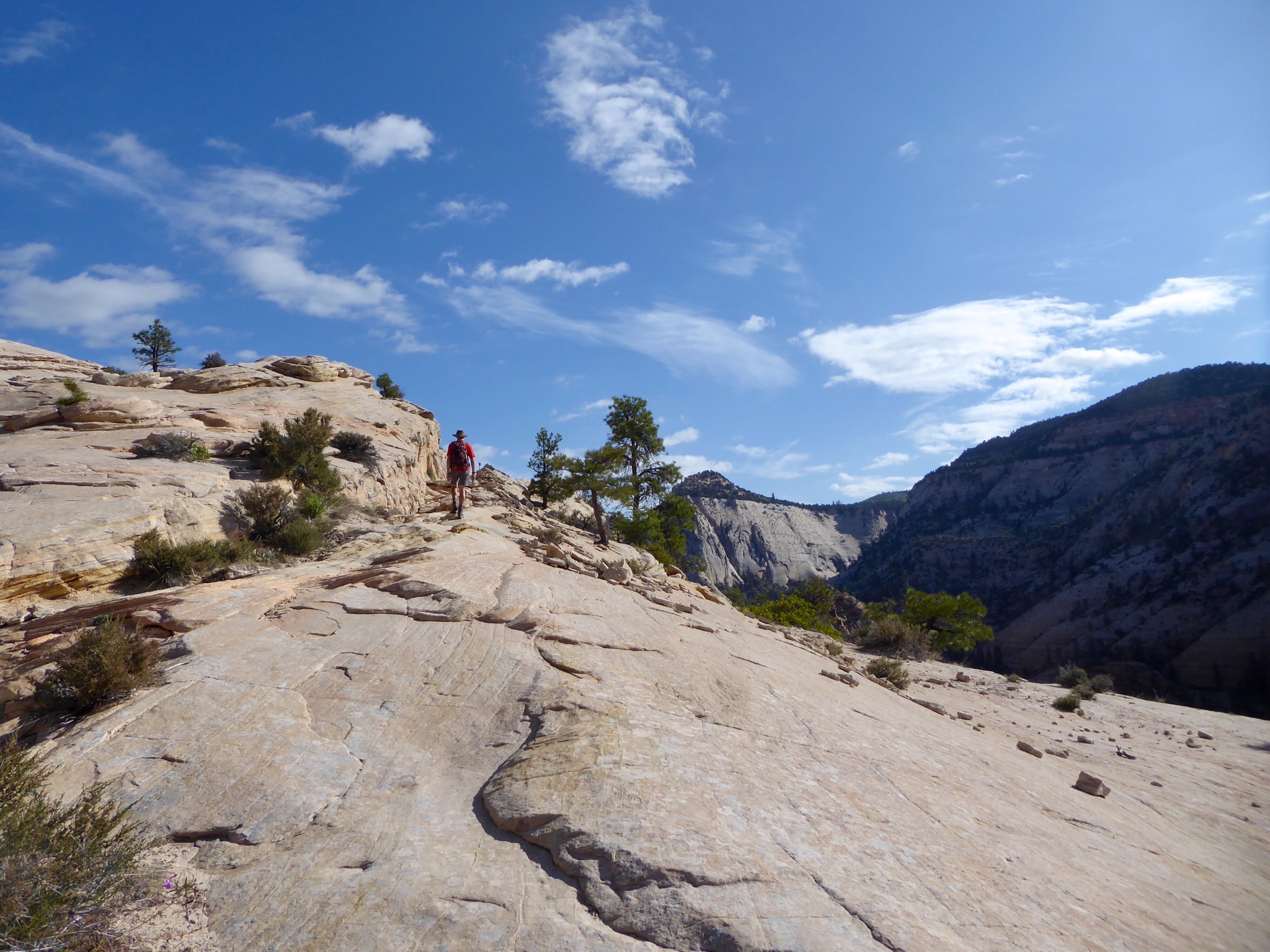 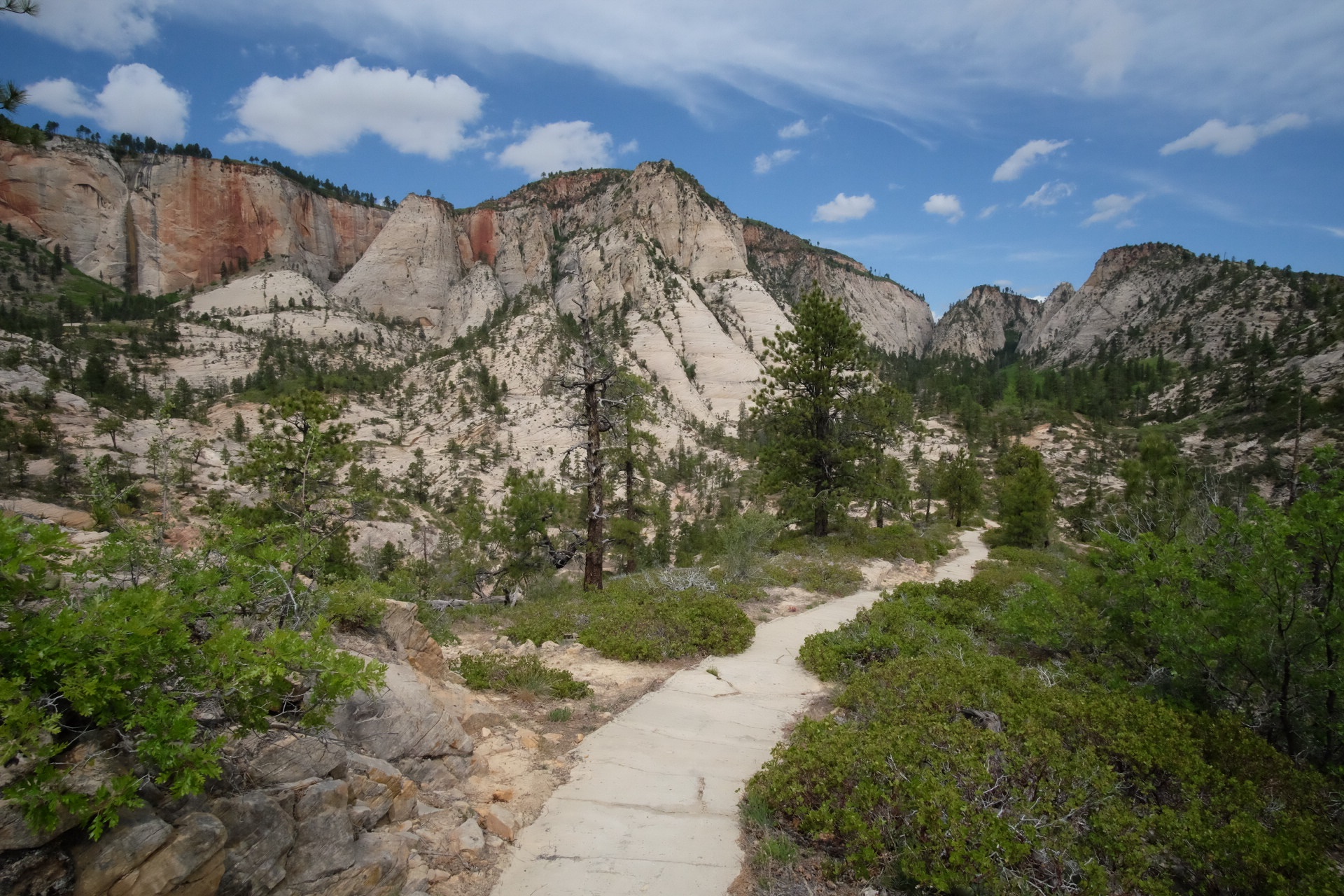 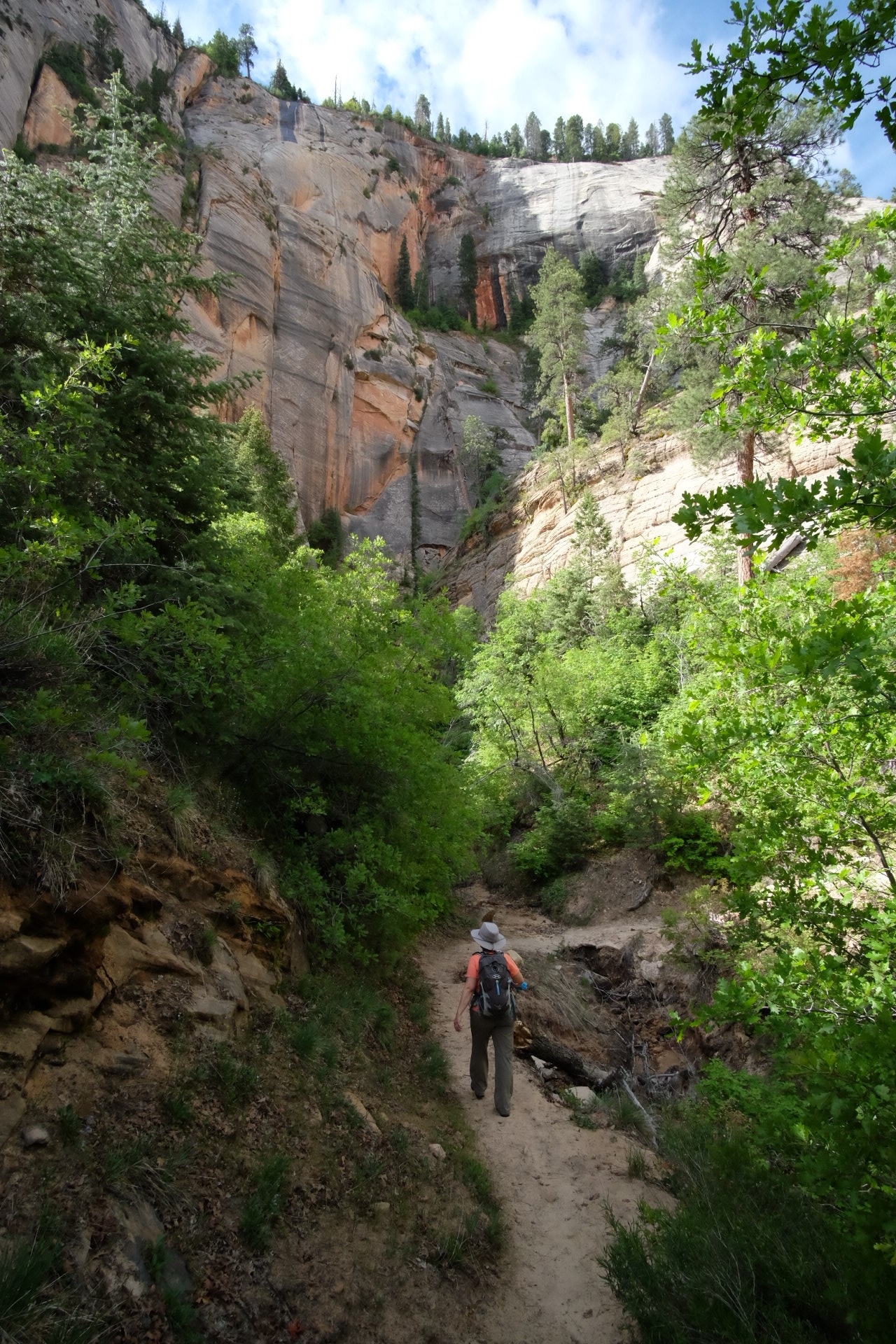 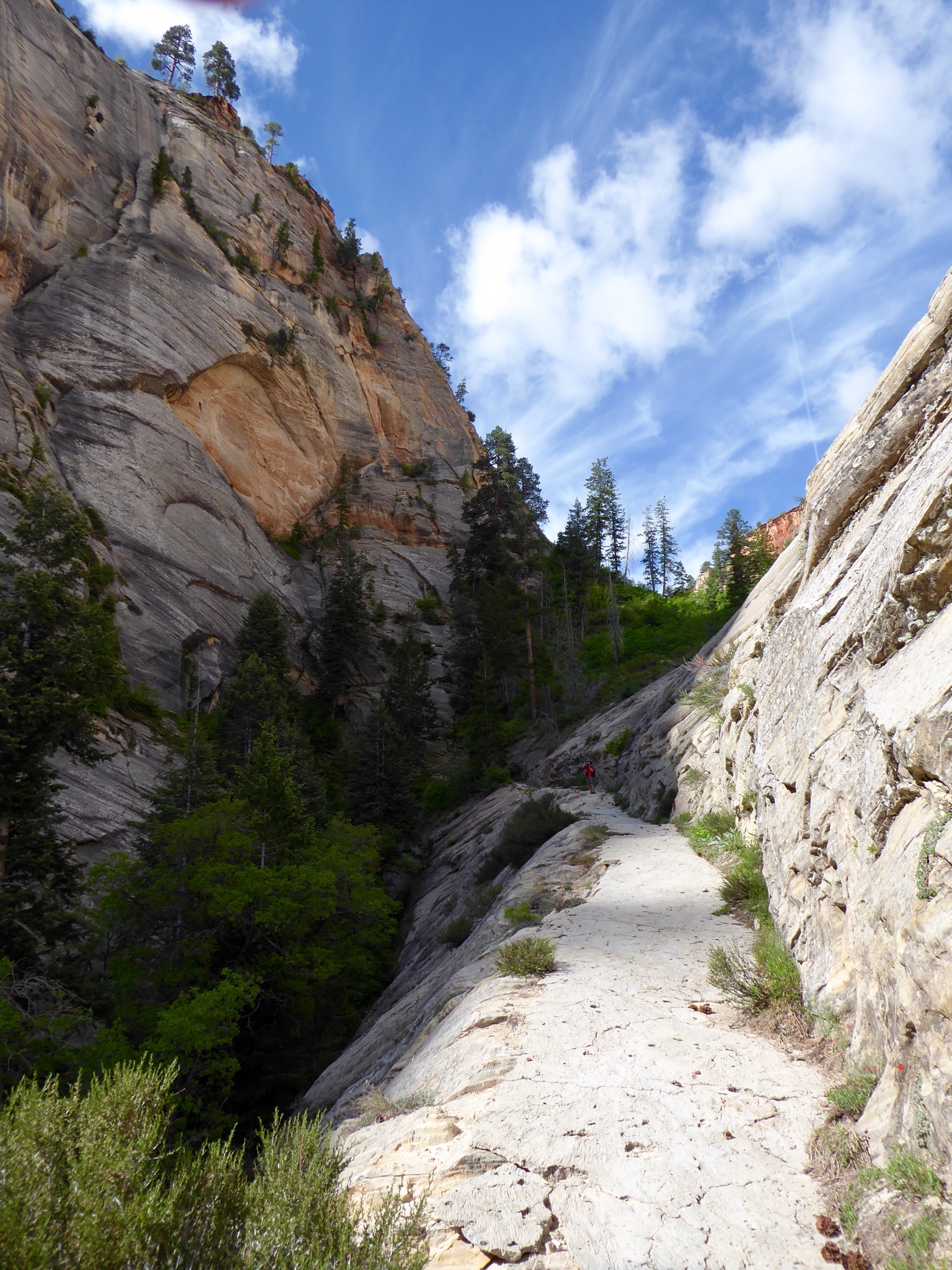 Climbing out of Little Siberia. 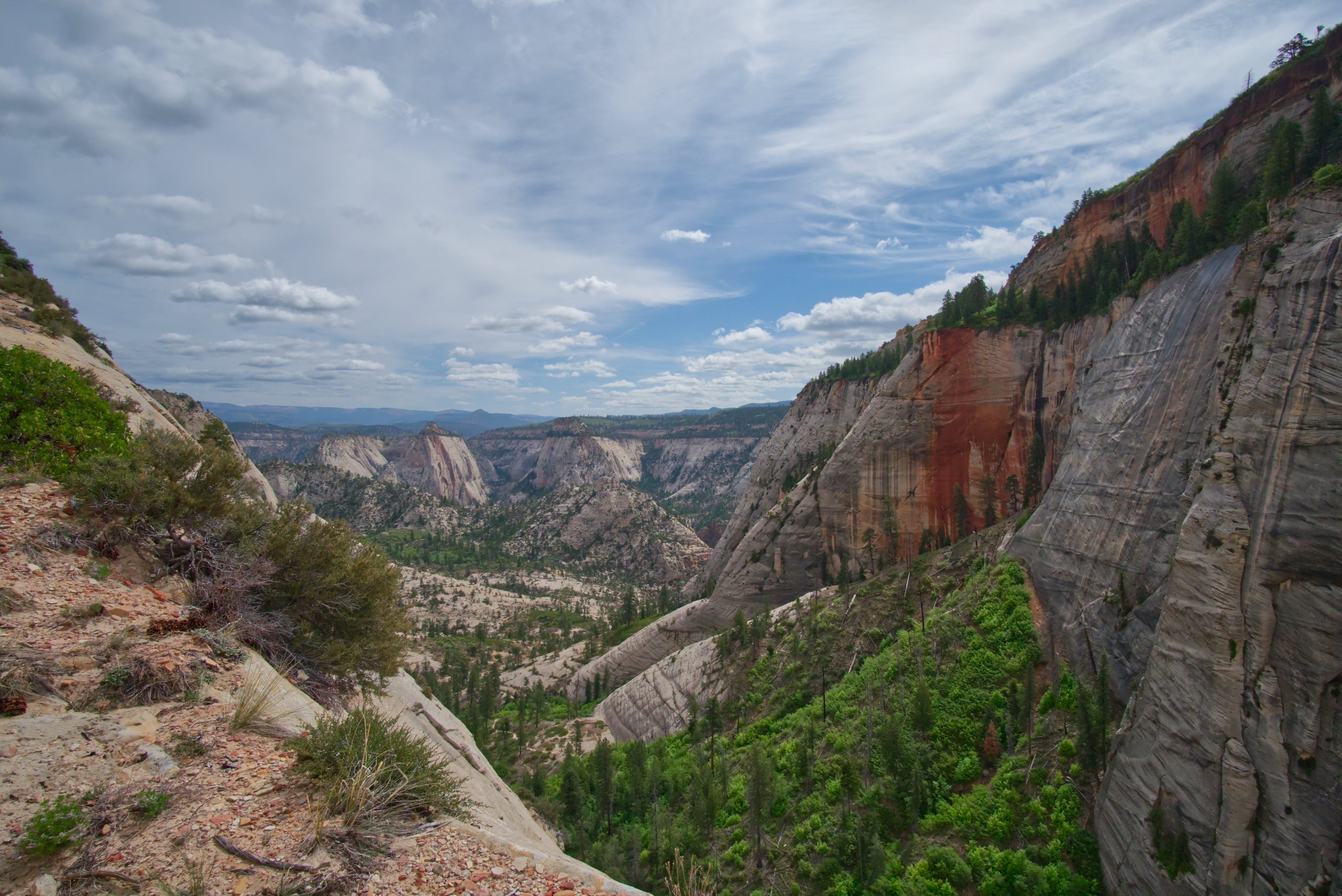 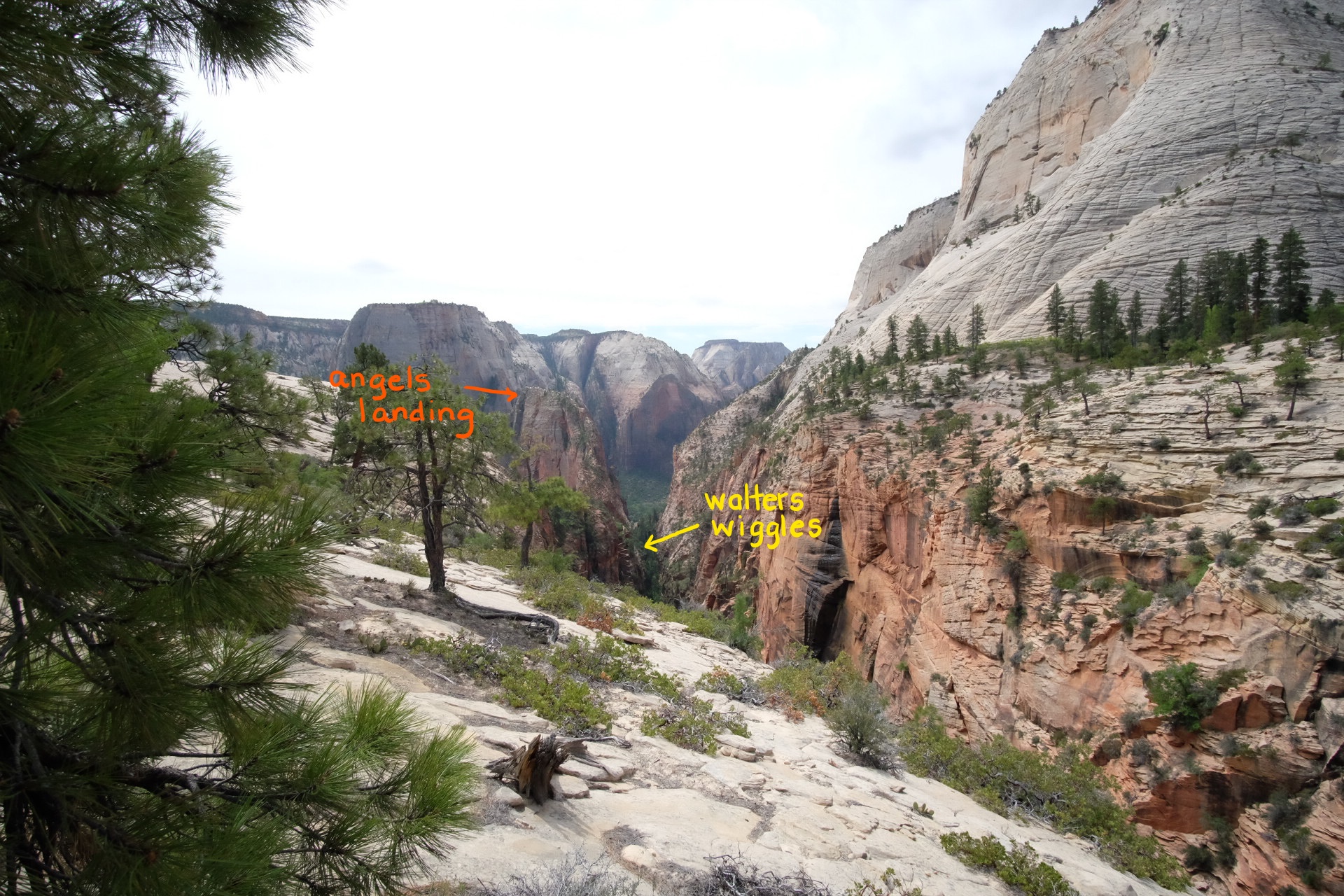 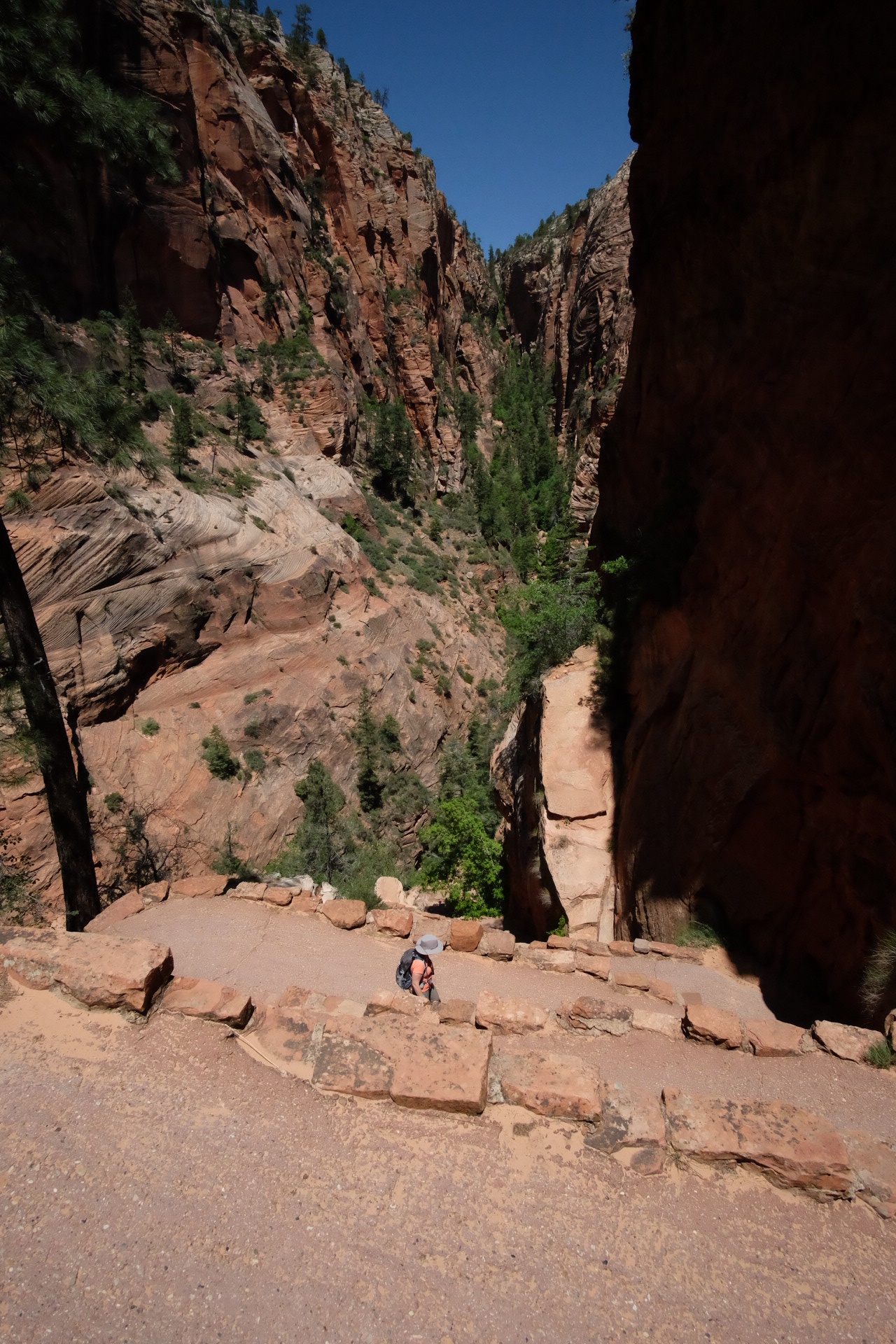 At the bottom of the V made by the sky in the above photo is the point from which the Perspective photo was shot.

Our next adventure involved traversing the park on the twisting, turning, wiggling Highway 9 and through the mile-long Zion-Mt. Carmel tunnel to get to a place just east of the passage. The two small parking lots were cordoned off, but further up the road we found a pullout that wasn’t ringed with No Parking signs. We hiked back down the road, and by the time we got to the ranger hut at the tunnel’s east entrance, the ranger was there. She confirmed our parking choice and wished us happy hiking. 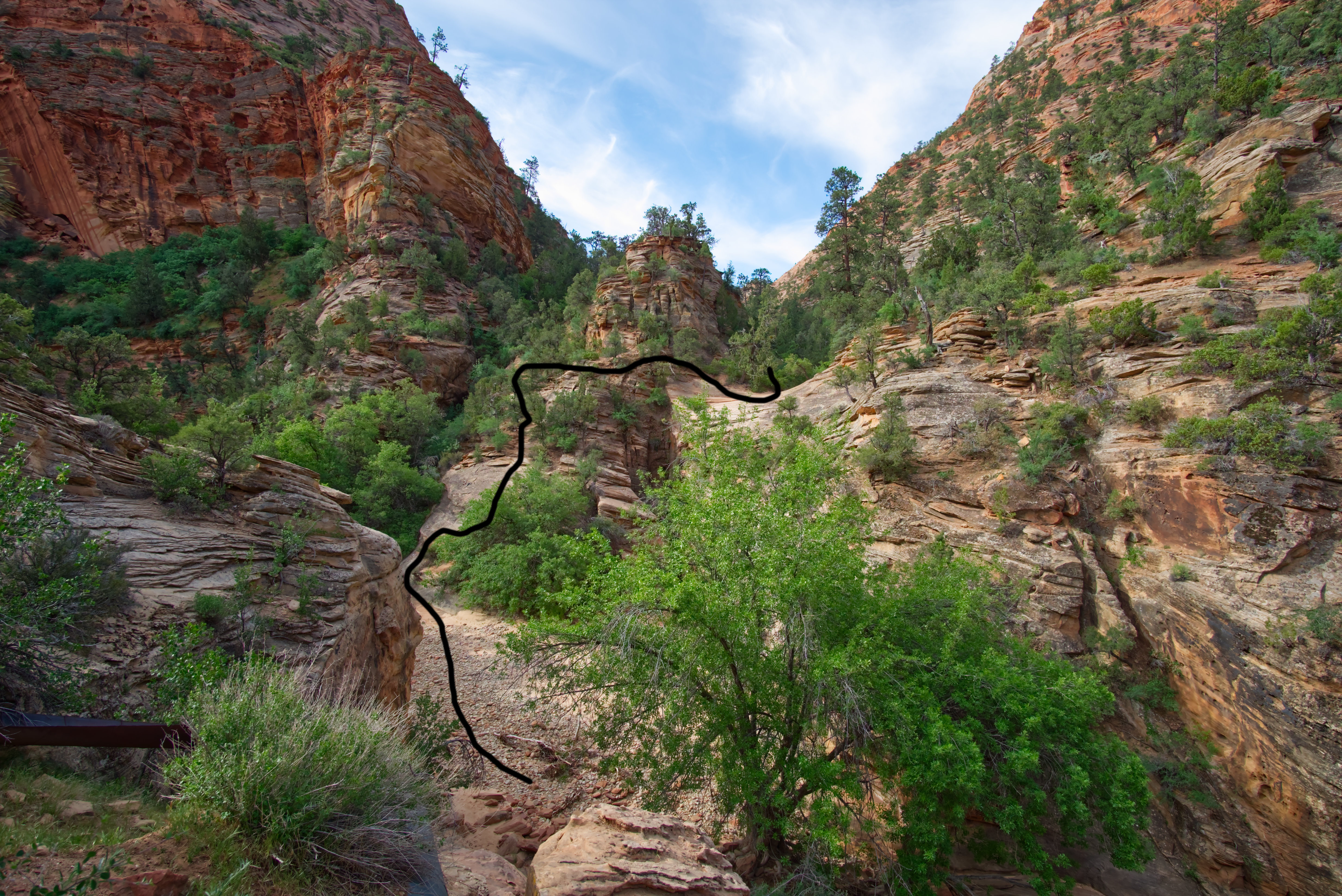 TBG made a handy-dandy little guide.

It’s a pretty canyon once you do, though. 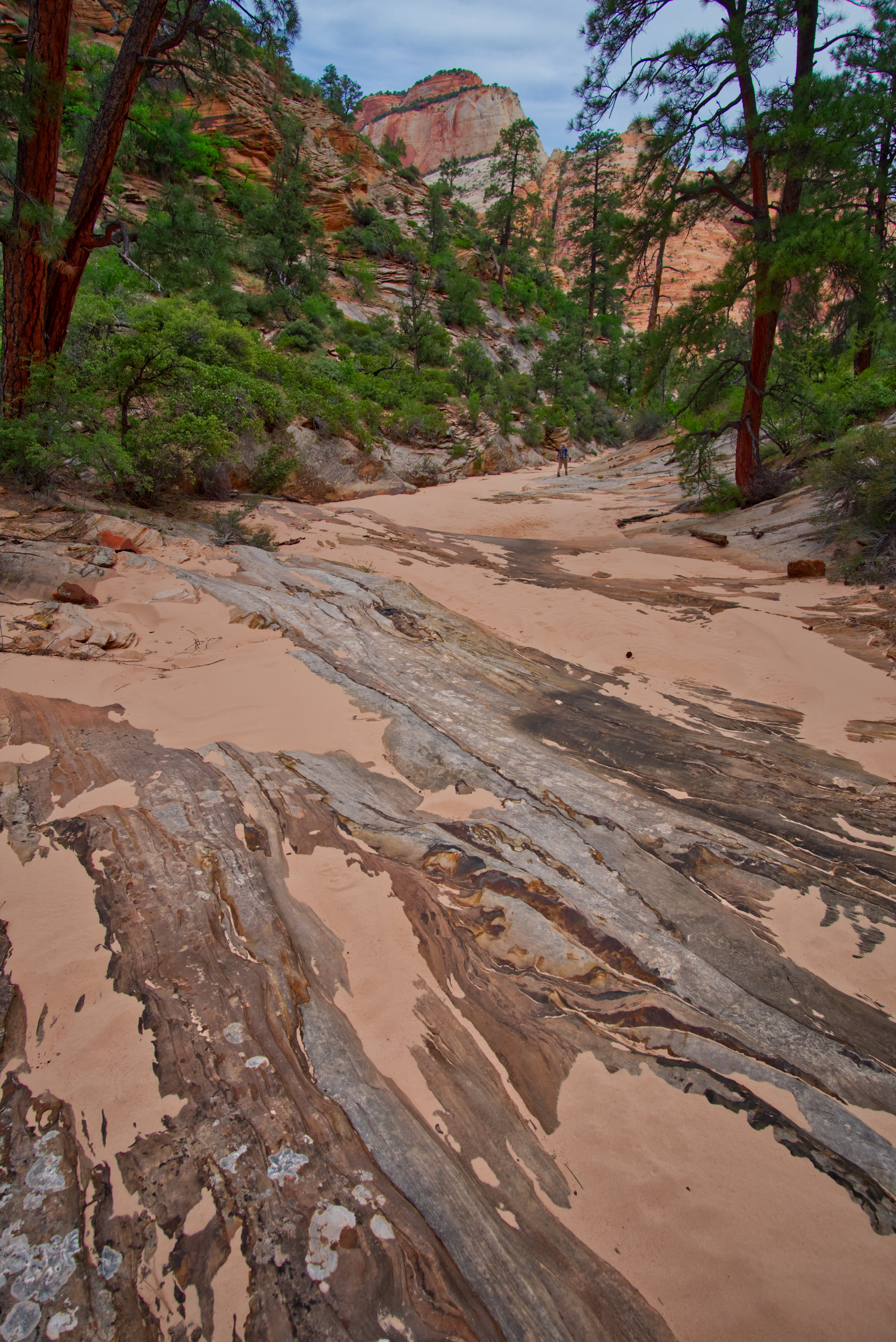 Trying to stay on the rocky parts which look like water in this photo.

Avoiding actual water wasn’t a problem in the bottom, but the sand could be tricky because sometimes where it looked perfectly dry, it was really boot-sucking quicksand. We didn’t see anyone else along the way, but that doesn’t mean we weren’t seen. 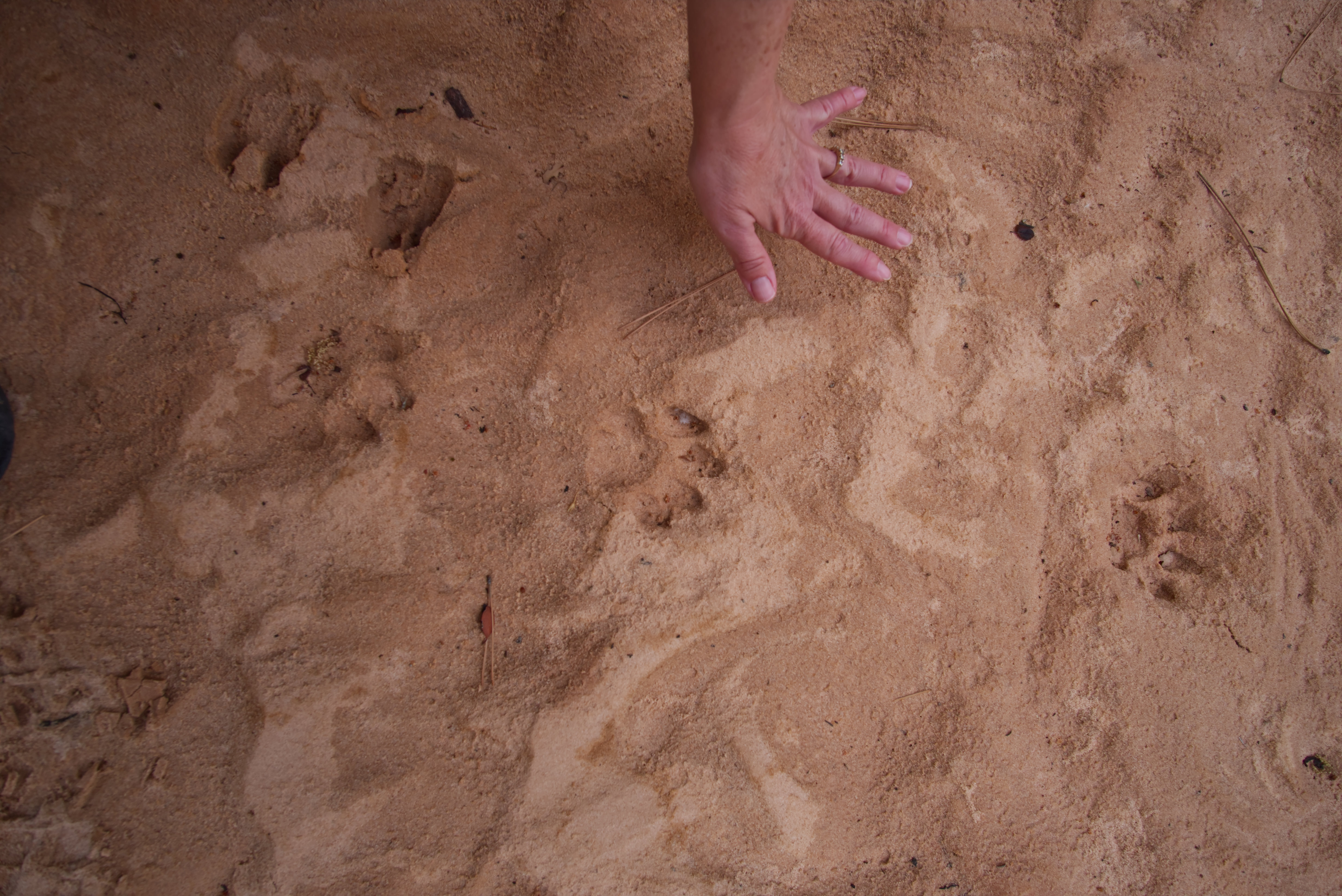 We didn’t go too far, mostly because it became a hard scramble and partially because worrying about being pounced on by a mountain lion is exhausting. 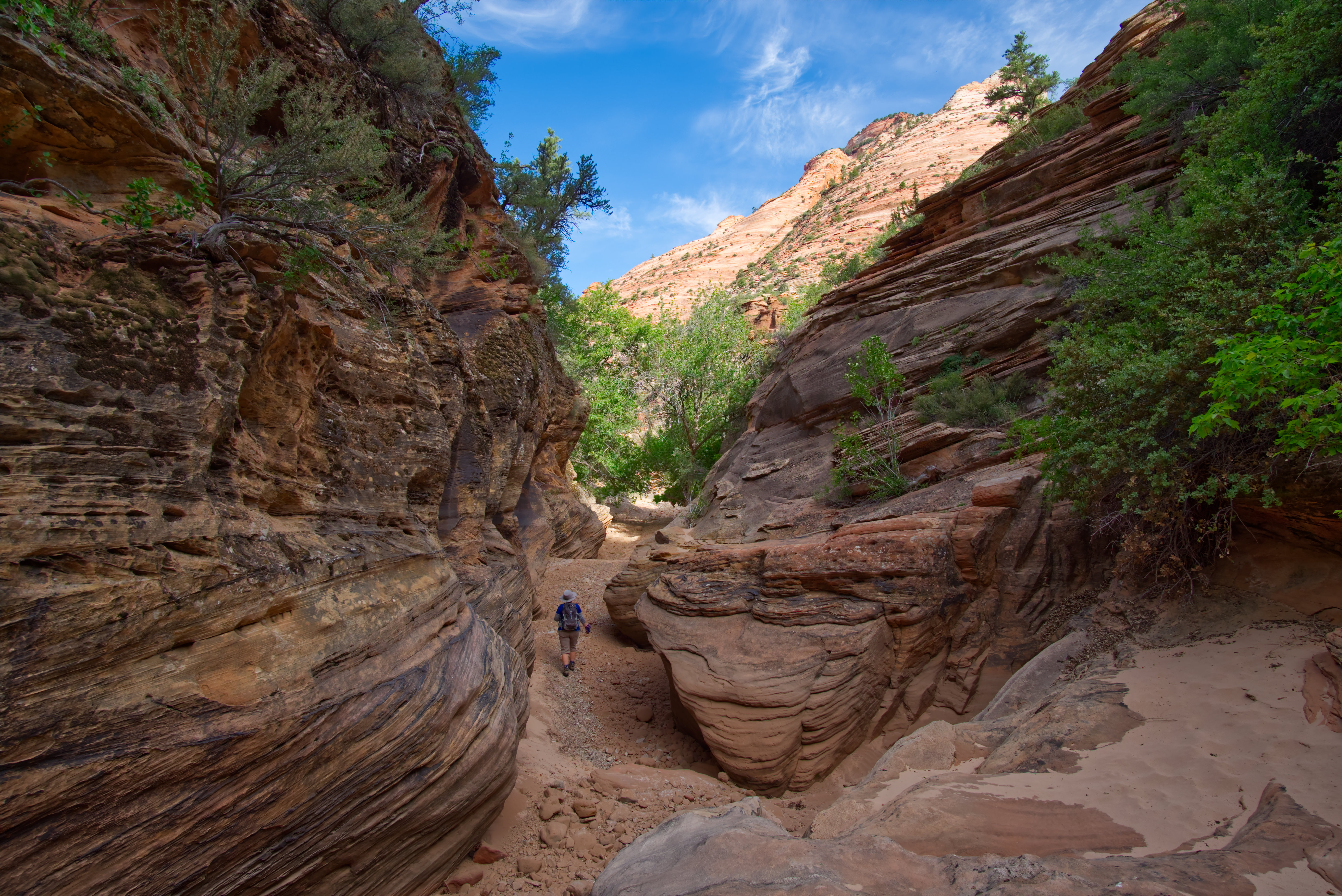 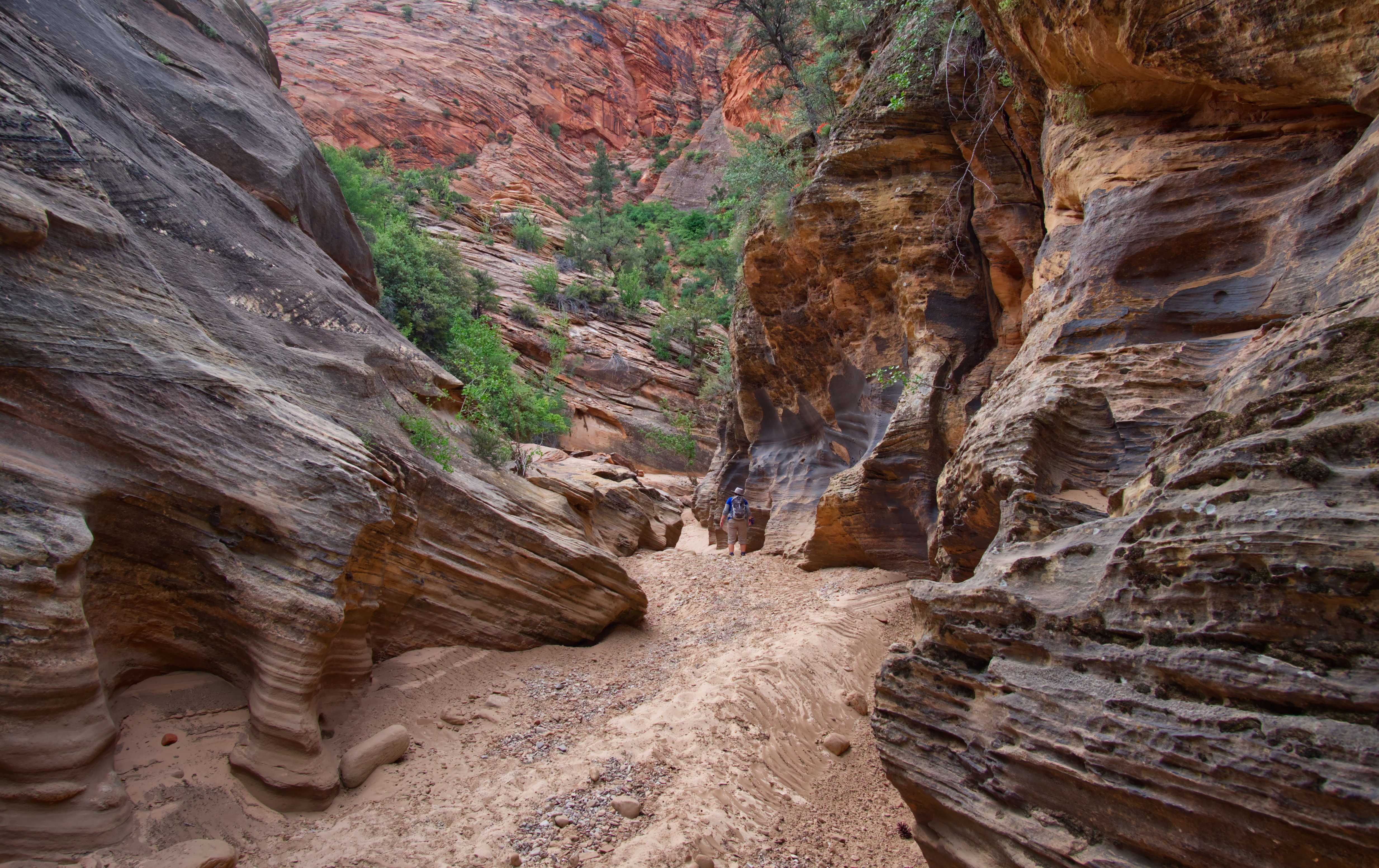 Peeking into a spur canyon before climbing out.

Since we hadn’t gone too far, we were ready for more fun, and headed further up the road to just inside the park’s east entrance where we accessed the East Rim Trail. 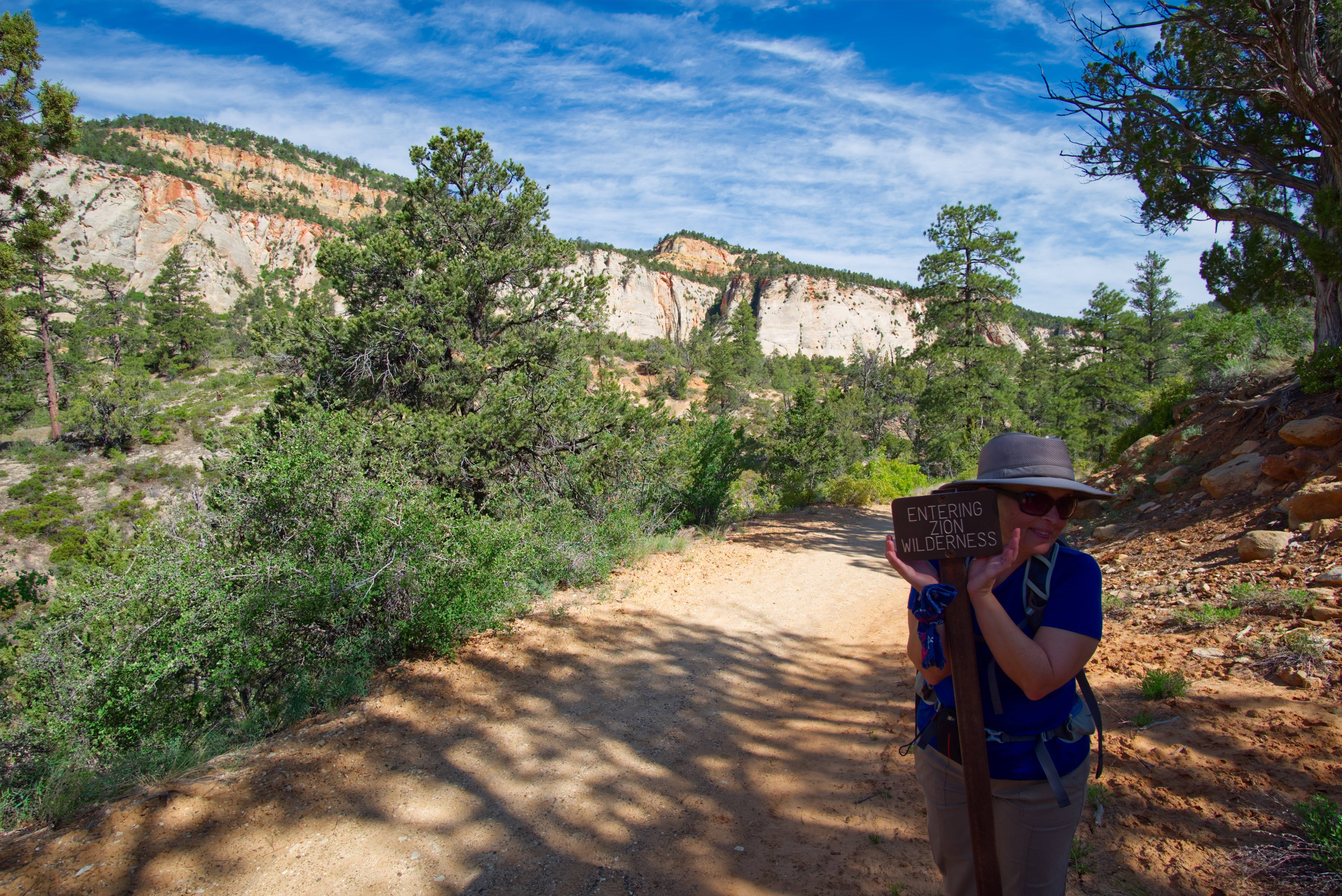 This section is not a particularly spectacular trail in Zion-speak, but it’s nicely maintained, and the long switchbacks up to the rim are easily navigated. The whole trail is 11 miles one way, but we weren’t doing that much even on our best day. That just leaves more for another time! 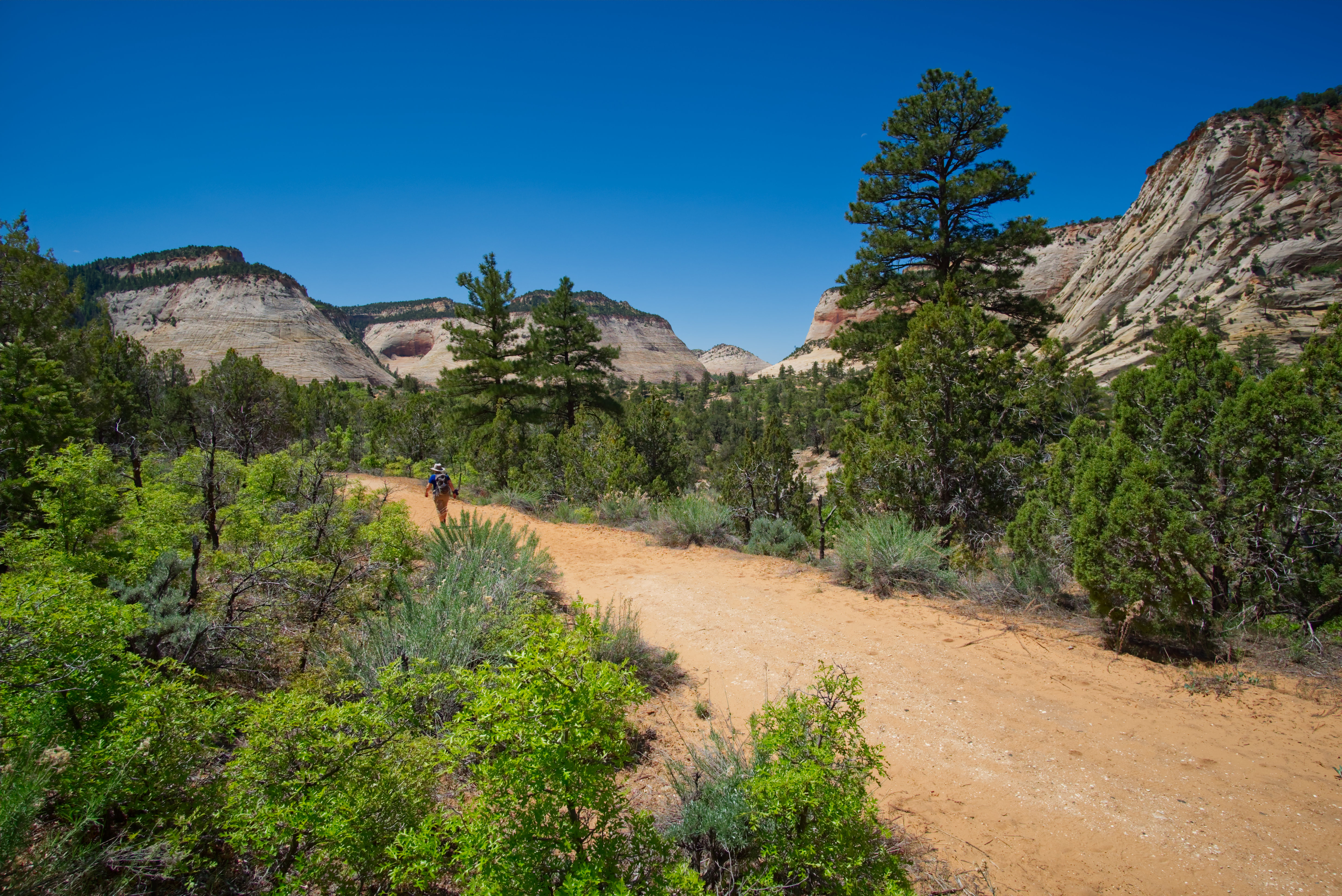 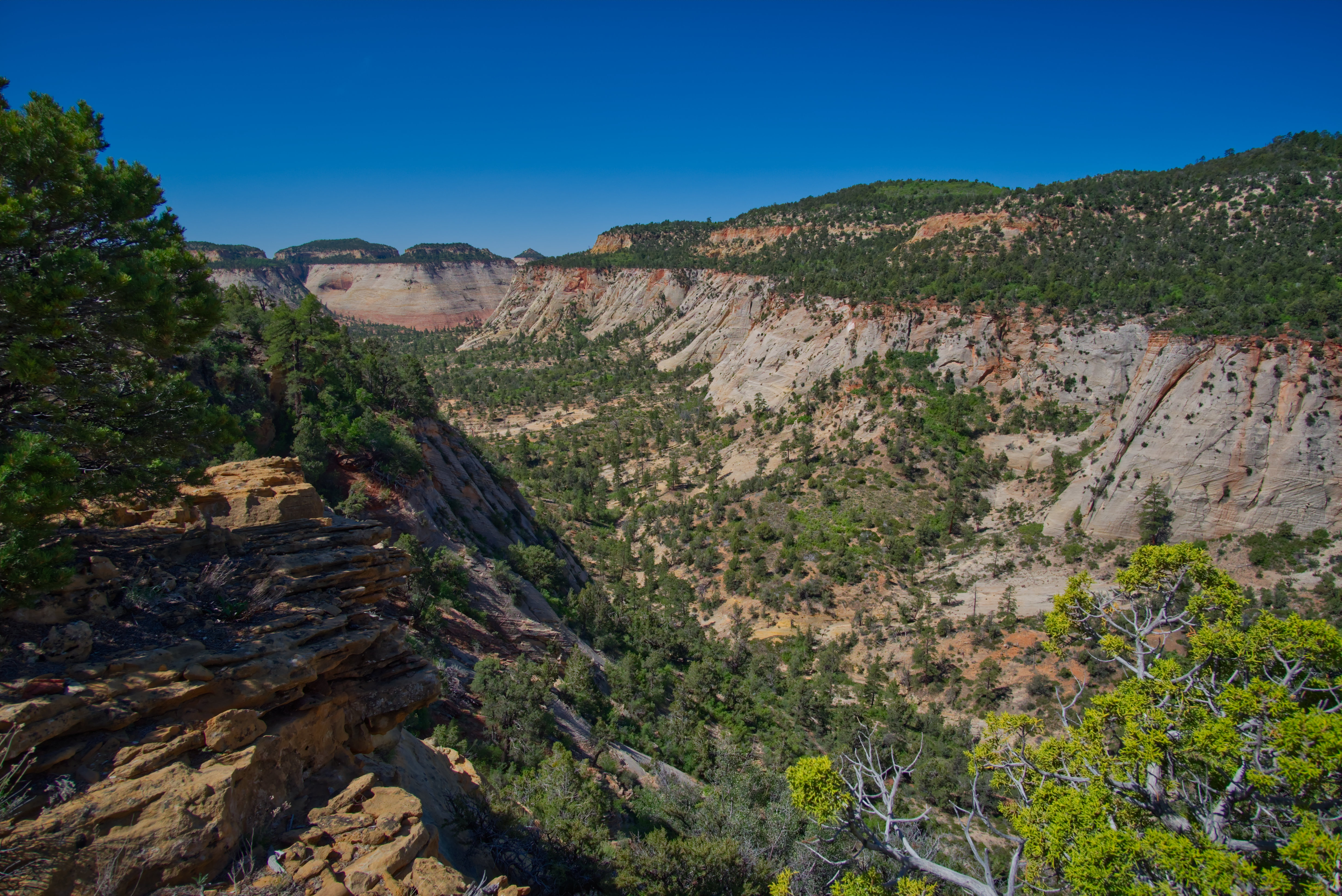 With the temperatures continuing to climb, the limited access to and popularity of the trails in the main canyon, and our desire to see the lesser-visited areas of the park anyhow, we headed up to the Kolob Terrace section for our third Zion foray. 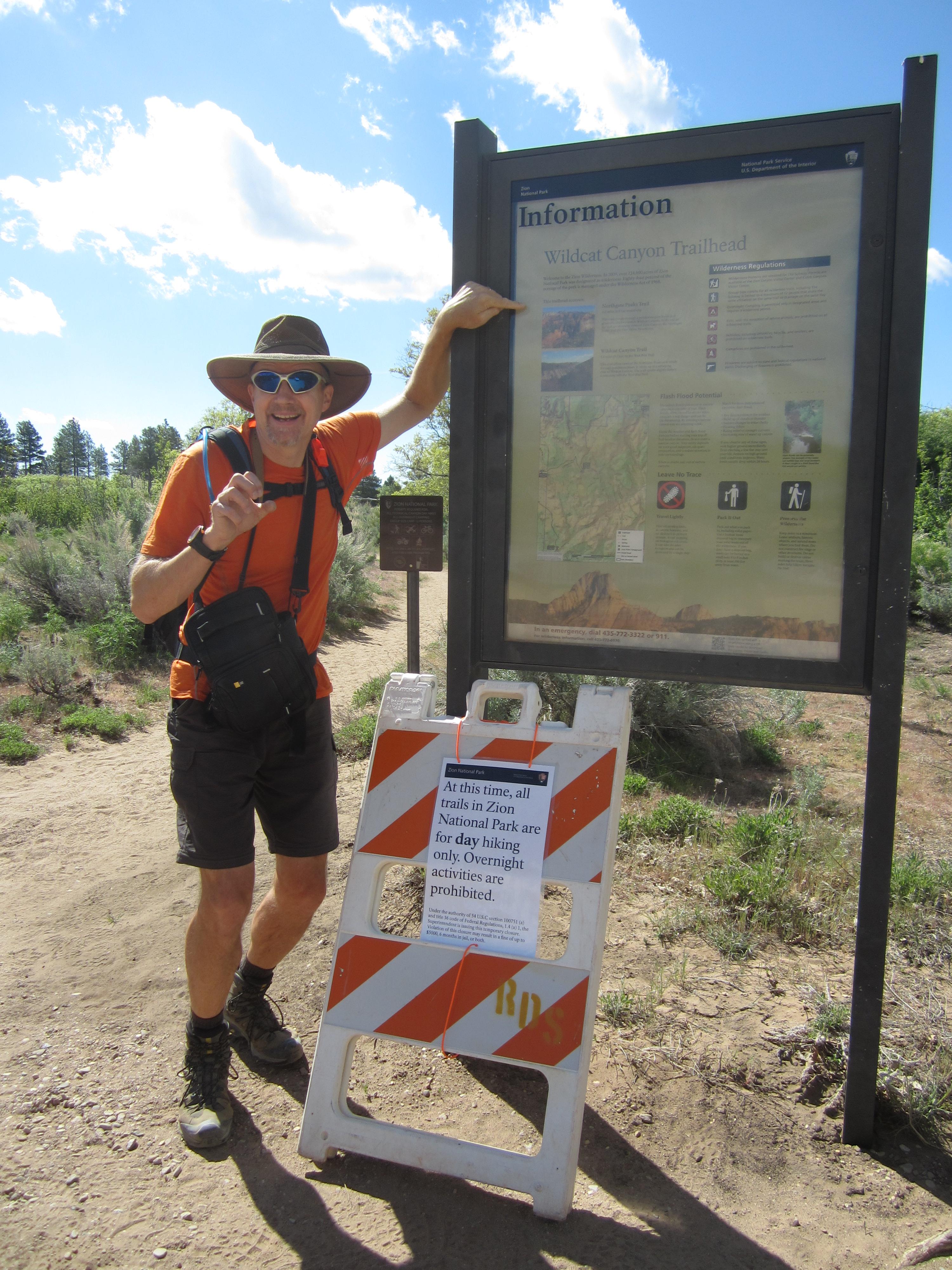 This hike, as you can see, begins at the Wildcat Canyon Trailhead, and I’ll show you that hike in the next post. Meanwhile, the first mile is the same for several different destinations. 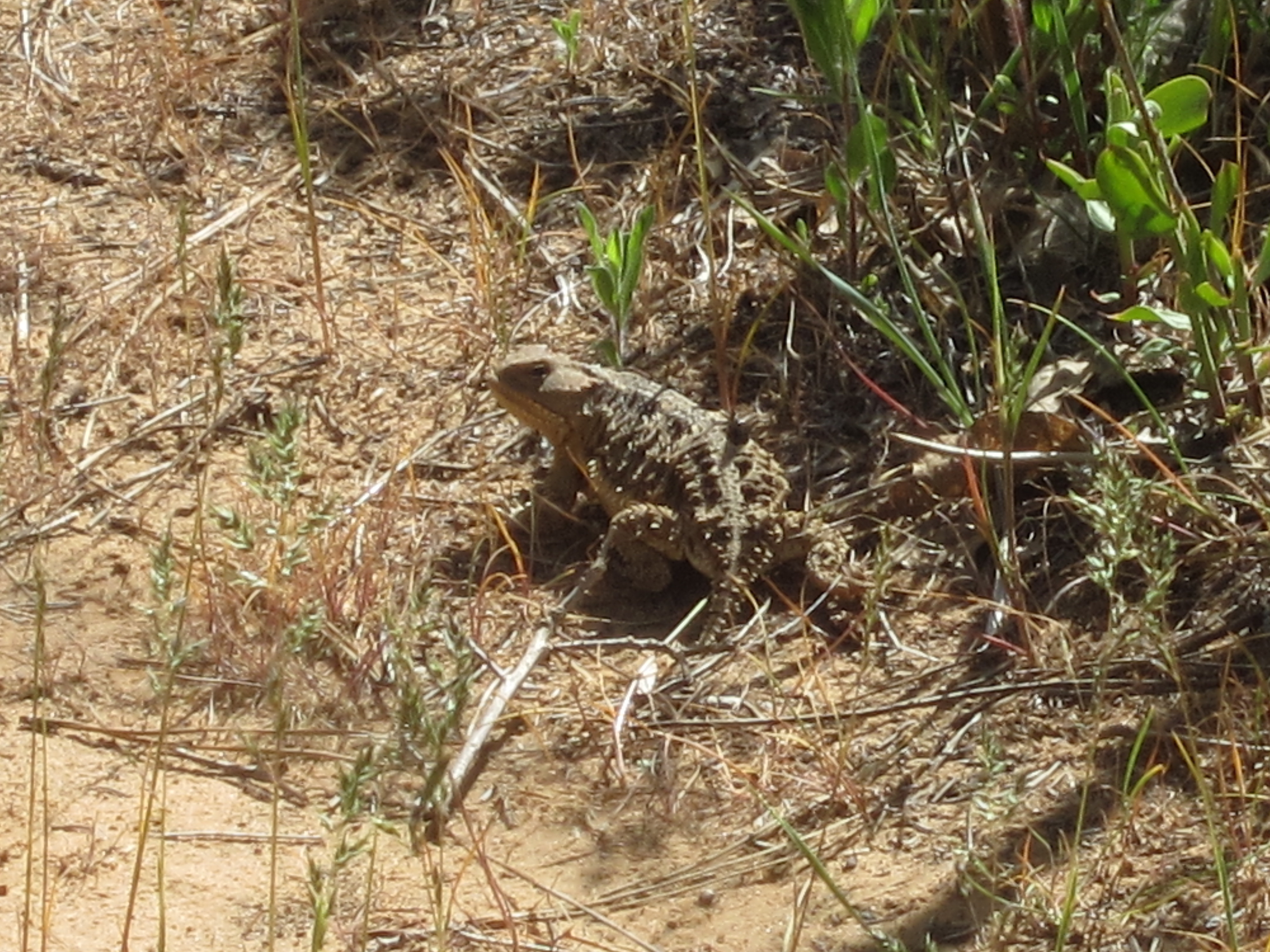 This world record fatty says, “It’s all the same to me!”

We enjoyed the pine-scented air and mild temps on the way out, but didn’t take many photos until we got to the end. 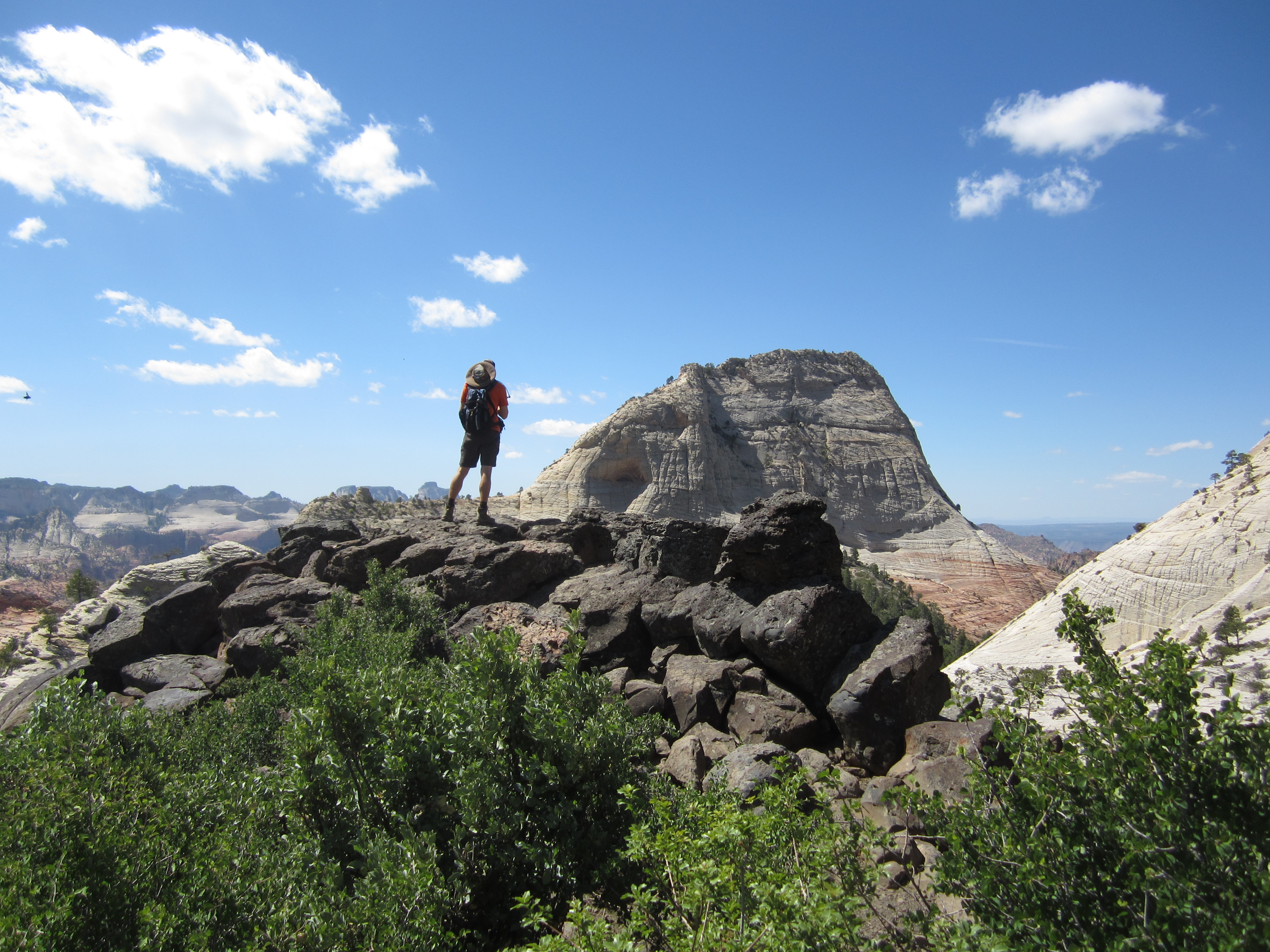 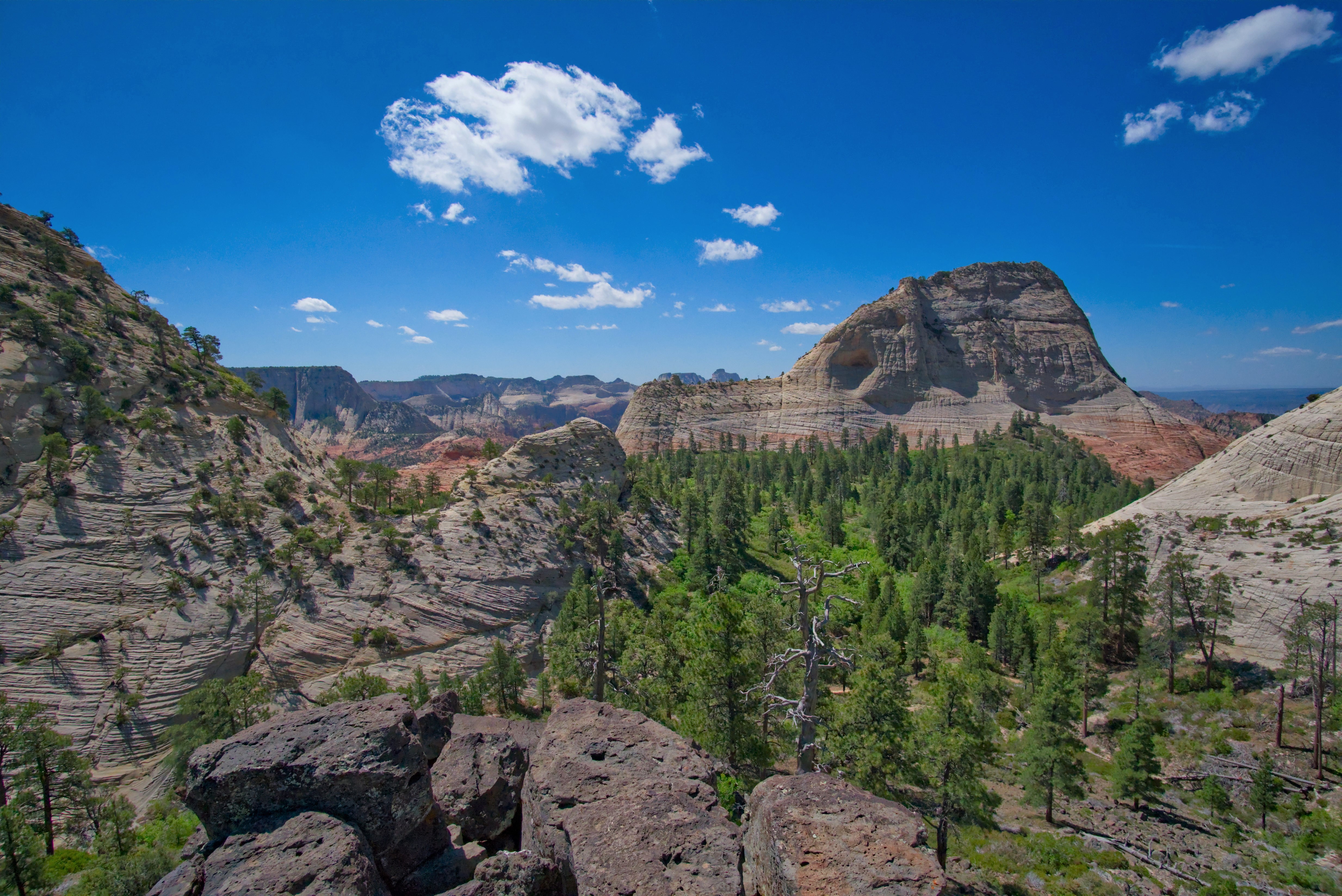 He’ll argue the pictures are worth it.

We veered off-trail a bit on the return to take in some alternate views. 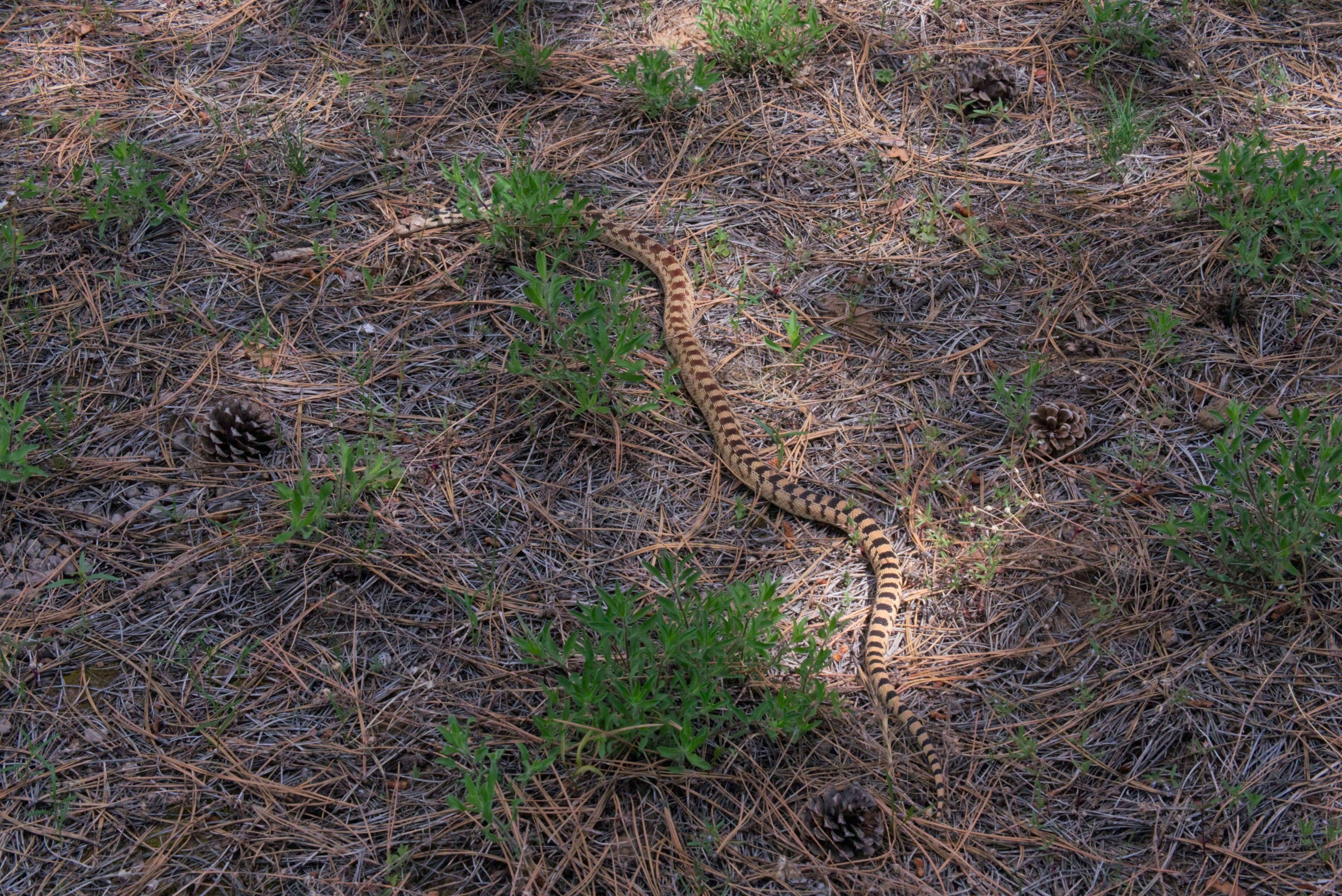 A gopher snake was guarding the cryptobiotic soil. 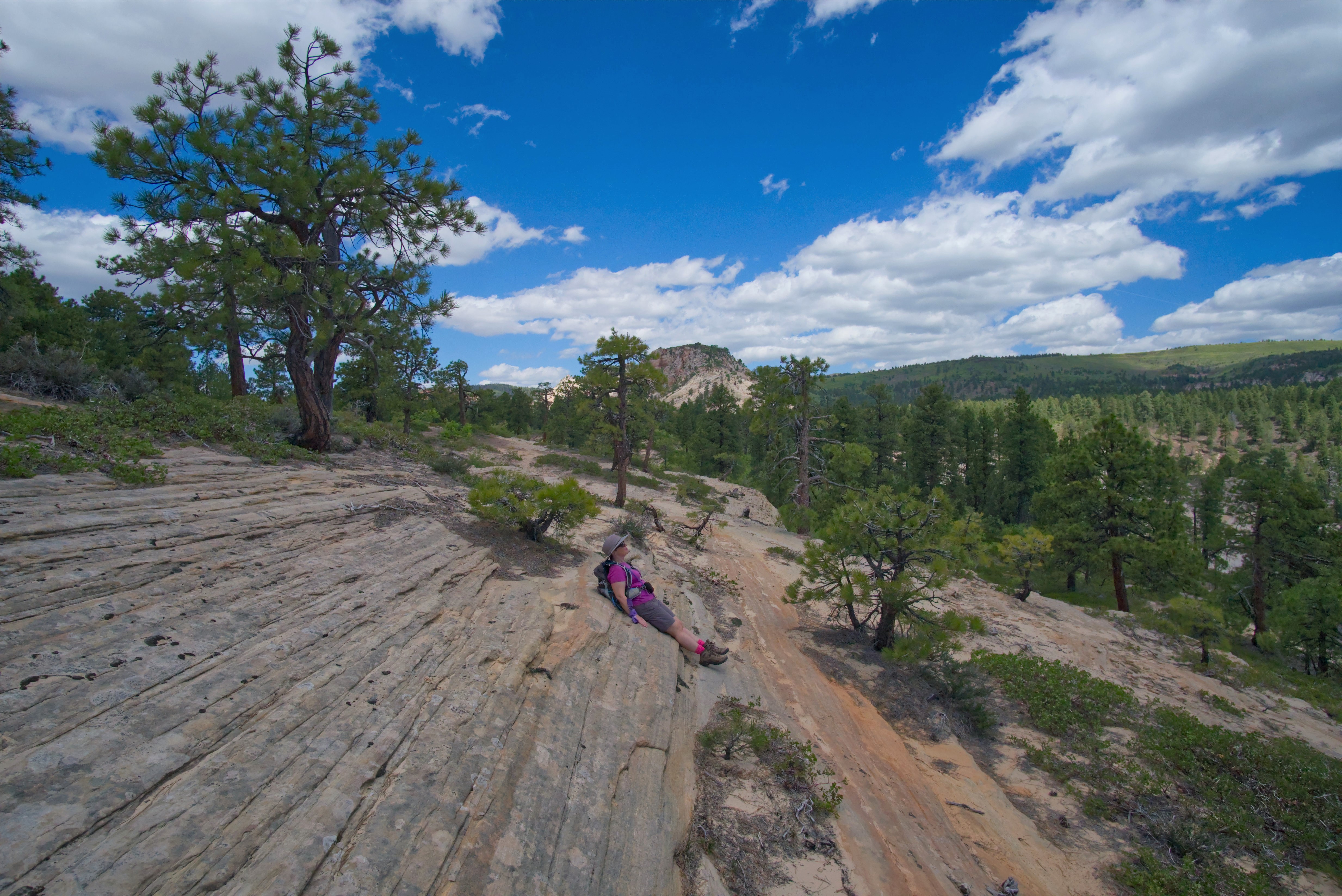 I took a nice rest well off the fragile soil while TBG walked out a bit further to check for photo ops. 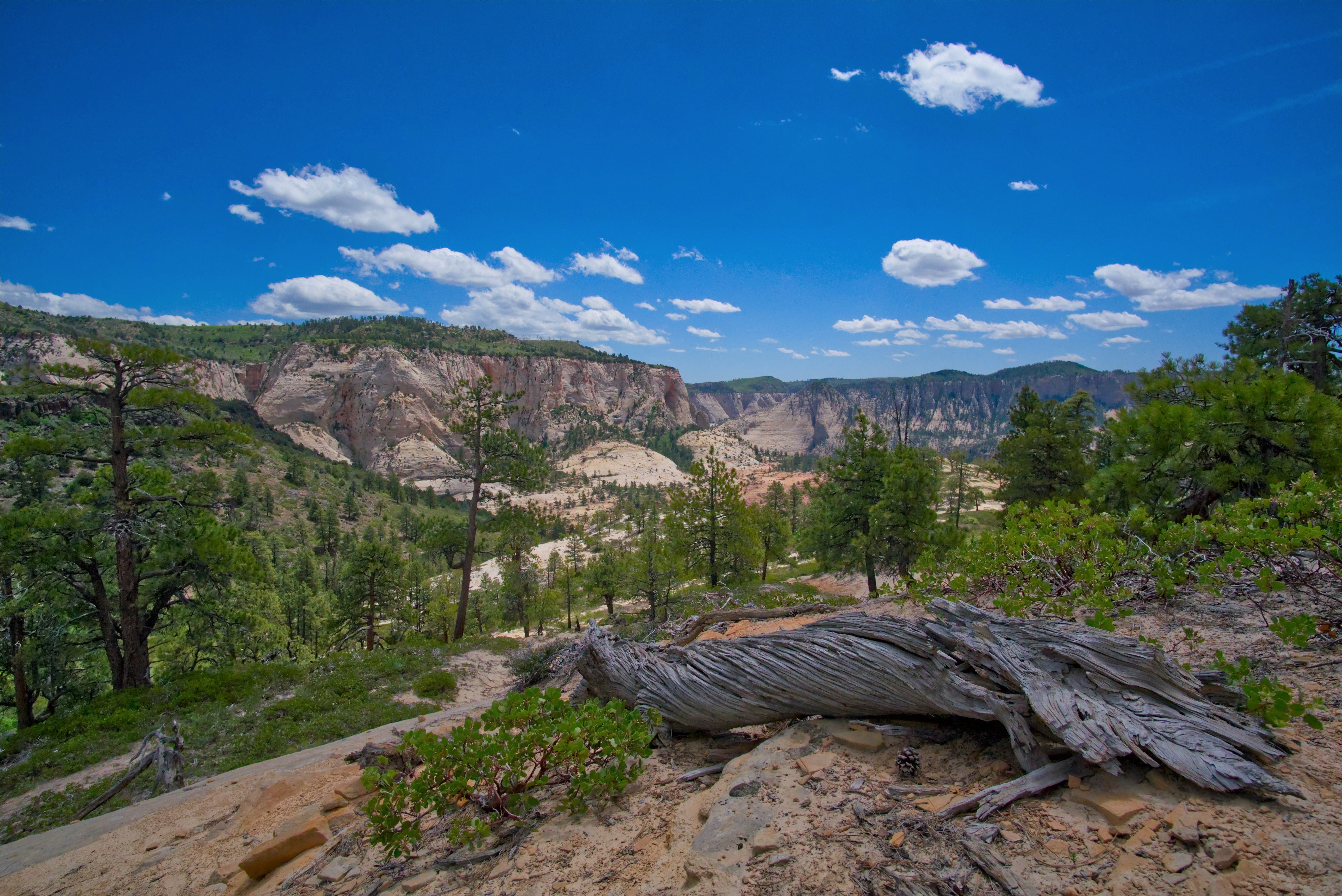 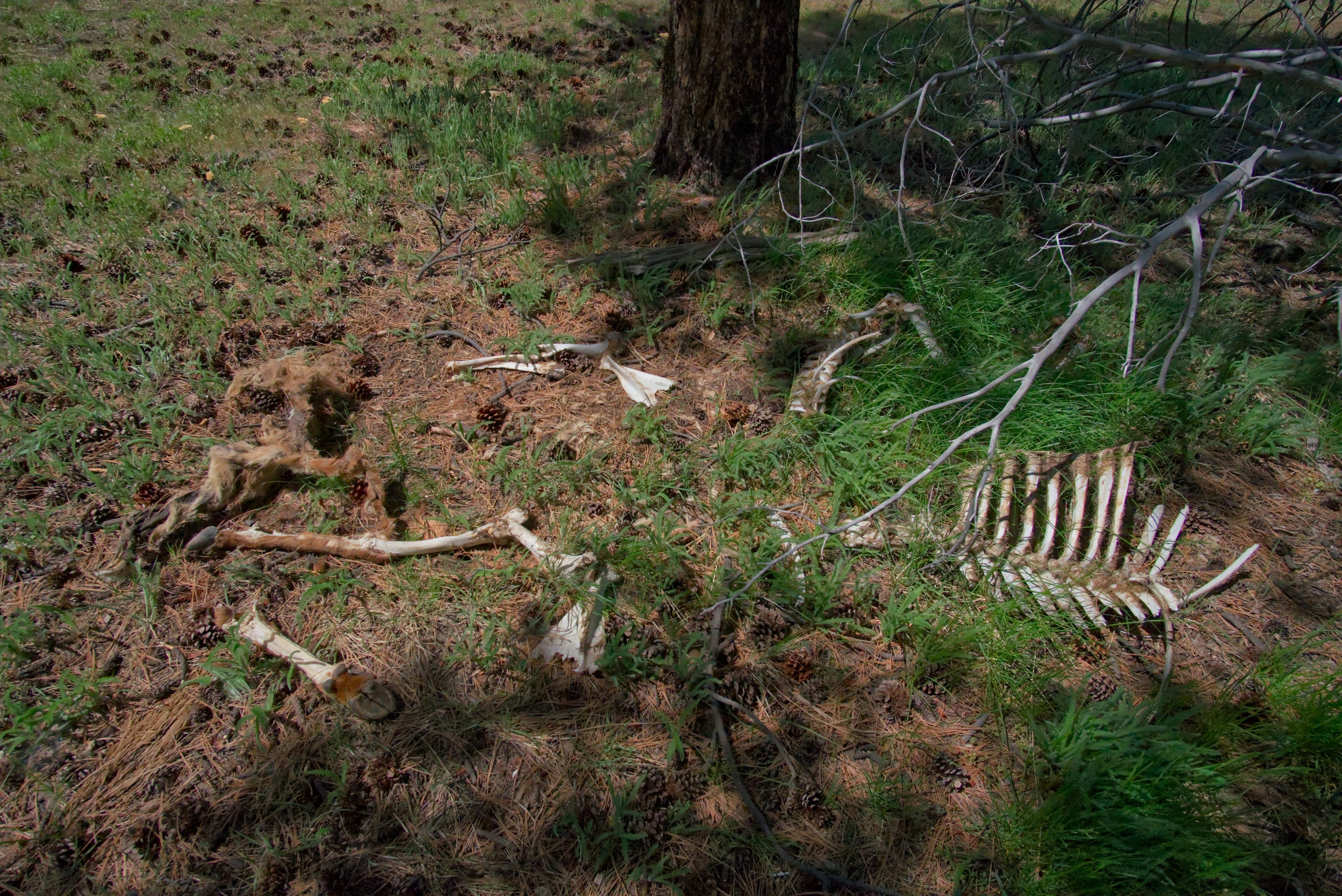 This is what befalls those who stomp the delicate ecology!

The ribcage of these elk remains shone like a beacon not far off the trail, so we had to investigate. There was no head anywhere to be found, which (we guessed) meant either the animal was poached for its rack or the skull was collected by park personnel after its natural demise.

The walk back was as pleasant as the walk out, though critter-free.

Two sets of our friends, The Lowes and the Wrights, recommended their favorite website for locating all the hikes in and around Zion, and we found it to be wonderfully helpful, too. If you’re ever headed this way, wanting to get your boots on the ground, Joe’s Guide to Zion National Park! with its detailed trail descriptions, maps, and photos will help you do it right. Thanks, Joe!